2021 VW Arteon: how does it fare against the BMW 3 Series and Merc C-Class? 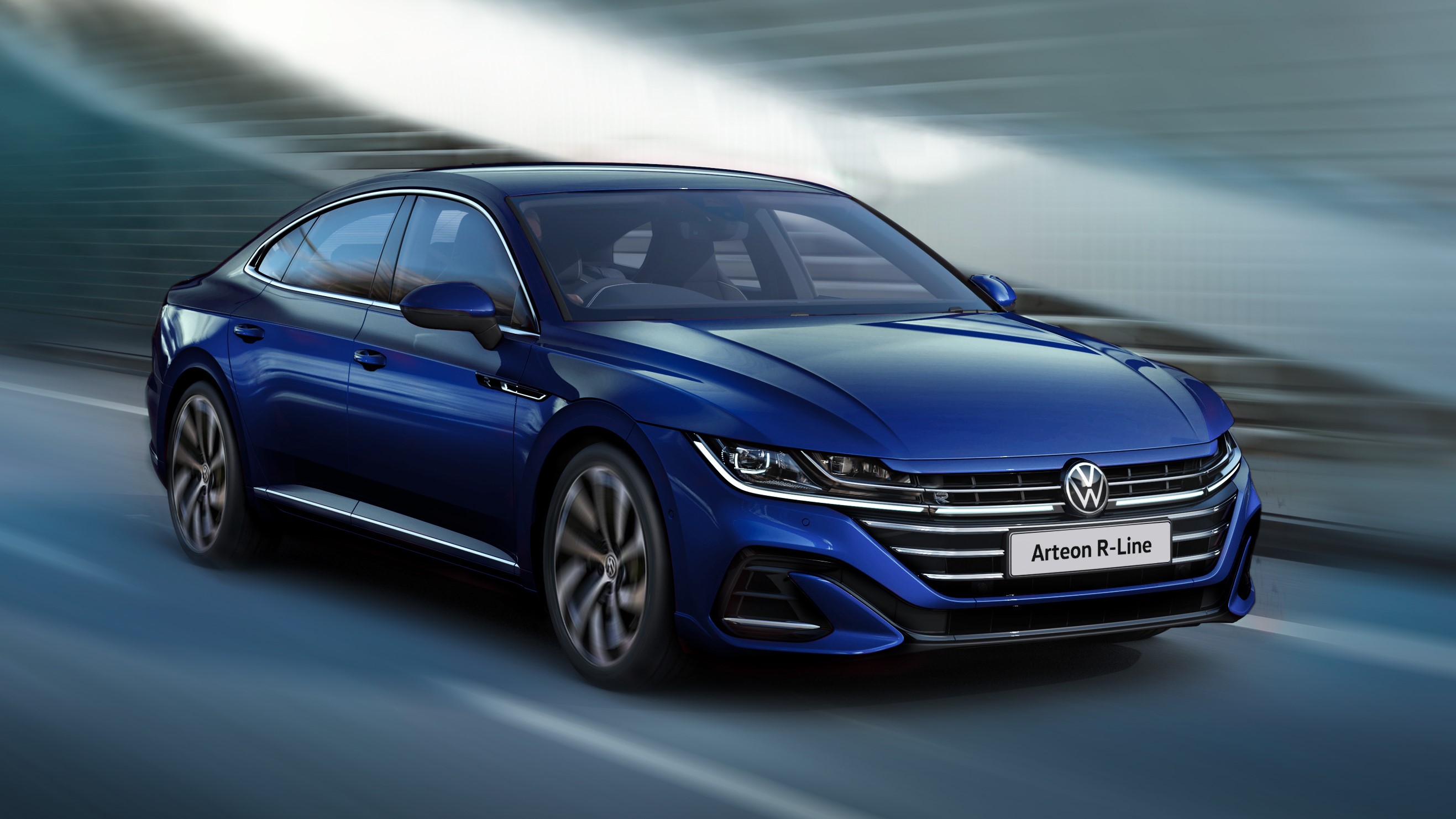 Despite the non-existent sense of occasion surrounding last week’s launch of the facelifted Volkswagen Arteon, the arrival of VW’s flagship saloon in R-Line 4Motion format was a huge statement from Volkswagen Passenger Cars Malaysia (VPCM).

Although the German carmaker has its fair share of admirers in this part of the world, its brand of mass motoring was never going to threaten a domestic market dominated by local manufacturers and heavily influenced by the Japanese status quo. Instead, Volkswagen had a bigger opportunity for growth in Malaysia’s premium game, what with the popularity of things like the CC and Golf GTI in the past.

The Arteon was the bullet VPCM needed to penetrate the RM200k-RM300k gateway to luxury motoring and it has finally fired. In fact, the first shot was fired last year when the pre-facelift arrived a tad late; that images of a new model were already circulating the web at the time did little to back its cause. The fact that the sole variant on offer was essentially a reskinned Passat in 190PS/320Nm tune didn’t help either. But it still sold while a pandemic raged in the background.

In launching the 2021 Arteon facelift in sole R-Line 4Motion format, VPCM has really moved the yardstick forward. What was once a fancified version of the Passat is now a Golf R in upmarket office clothing, locally-assembled to give it the price and packaging to seriously challenge long-time segment favourites and arch rivals from BMW and Mercedes. Even VPCM managing director Erik Winter didn’t shy from identifying the Arteon R-Line 4Motions rivals by name during a press conference.

C-Class and 3 Series… Badge influence is still a potentially decisive factor in a market propped up by superficial qualities. So, does VPCM’s new flagship have what it takes to stir trouble in paradise?

Local assembly has allowed VPCM to squeeze Golf R-like performance and Passat-like practicality just below the RM250k mark – RM247,671 on-the-road, with SST exemption, minus insurance – making the Arteon R-Line 4Motion one of the most comprehensive packages in the price bracket.

The Vee-Dub isn’t technically the cheapest option in a three-way rivalry that includes BMW and Mercedes-Benz, though. The 320i Sport – the most affordable 3er in Malaysia – costs marginally less at RM243,884. However, its 184bhp/300Nm output is no match for the Arteon’s 280PS (276bhp) and 350Nm of twist. The CKD 330i M Sport is a closer contender with 258bhp and 50Nm more torque than Volkswagen’s third-generation EA888 engine. But the feistier Bimmer commands a near-RM37k premium over the VW at RM284,332 on-the-road.

With the new W206 C-Class just around the corner, the only W205 C-Class variant officially on sale in Malaysia at the moment is the C300 AMG Line, which is the priciest option by a mile at RM291,800. It’s also the only car that doesn’t include complimentary scheduled maintenance in its price. The 3er’s prices include five years of free service up to 100,000km while VPCM walks the middle ground by offering three years of free maintenance.

With aftersales and model variety factored in, BMW edges it in terms of value – the 320i and 330i can be had for even less, at RM230,764 and RM271,212 respectively if you’re willing to forgo their Extended Warranty and Service Package. That said, the difference could end up being insignificant when broken down to monthly instalments over a seven- to nine-year period.

The Arteon is also the only car of the three with a rear hatch that opens into the cabin. Some drivers may prefer the BMW and Merc’s old-fashioned boot instead, but the 563 litres of storage offered by the big Volkswagen is something that the 480-litre boots of the two German arch-rivals will struggle to compete with.

It’s also worth noting that despite its AWD architecture, the Arteon is the only car here with a transverse engine layout that’s usually more space-efficient than longitudinal, rear-wheel drive platforms. So, if space and practicality is what you’re after, especially if you’re upgrading from a Japanese D-segment saloon, you’ll likely find the Volkswagen’s cabin more welcoming than the cosy confines of its premium rivals.

If it was, the Volkswagen Arteon R-Line 4Motion would be the runaway victor with 20-or-so bhp more than each of its fellow compatriots. The C300 AMG Line and 330i M Sport are closely matched with 255bhp and 258bhp of four-pot grunt on tap respectively. What they lack in outright horses they make up for in torque. The C300’s 370Nm and 330i’s 400Nm both supersede the Arteon’s 350Nm twist limit, which is largely why all cars have similar century sprint times despite the Vee-Dub’s clear lead in terms of sheer power – that’s 5.6 seconds for the Arteon, 5.8 for the BMW and 5.9 for the Merc.

Ultimately, bragging rights based on quantifiable properties will still work out in the favour of Arteon owners. Straight-line stats aside, it is the only car here with adaptive damping (Dynamic Chassis Control) AWD with an electronic diff and a dual-clutch transmission (of the wet clutch variety, mind you). That said, the timeless allure of a rear-driven saloon is one that’s hard to ignore. Factor in subjectivity surrounding ride and handling and the best way to pick a winner here is still a comprehensive test drive; you should really try them all out before signing on the dotted line.

Beyond driving dynamics, there’s also fuel efficiency to consider. VPCM admits that it went with a tune favouring performance over fuel economy with the 2021 Arteon. And although a combined average of 7.4 litres per 100km is still impressive if it can be replicated on Malaysian roads, it’s still a few ticks short of the sub-7.0-litre figures averaged by the G20 330i and W205 C300. That said, the actual differences under real-world driving conditions might be even less noticeable, if at all.

In terms of tech, a relative balance in equipment levels between all three German saloons benefits the cheaper Arteon. All of them have snazzy digital instrument clusters and Apple CarPlay and Android Auto connectivity, although it's worth noting that the only the VW and Bimmer can support the former wirelessly. Each car is treated to its own buffet of fancy LED lighting and driver aid sensors, though it's worth noting none are properly equipped with full-fledged semi-autonomous features we've come to expect at this price point in 2021. Put simply, unless you're approach each car with a clipboard and the mentality of an auditor, they're probably all going to feel similarly and sufficiently well-equipped on the tech front, leaving things like space, performance and price as the key deciding factors at the end of the day.

To that end, most of the arguments favour the newest kid on the block; measuring the 2021 Arteon R-Line against the BMW and Merc duo that have dominated this segment of the market for decades is like comparing a loaded Android smartphone against everyone's pricier favourite, the iPhone. Empirical evidence dictates that the Volkswagen offers a whole lot more for less – something which will undoubtedly convince many to visit a VW showroom once the lockdown is relaxed. But like Apple, the 3 Series and C-Class have brand power on their side. The luxury game isn't always won or lost on value after all. And there's the debatable subject of looks, too.

As far as that's concerned, we doubt you'll be faulted for staying rooted in the Arteon's corner, such is the impression it makes from skin to bones.