What is that and why is it covered in wrapping paper?

What you’re looking at is the Lamborghini Huracán STO (Super Trofeo Omologata). Well, the development car. Recently TG was invited to have a go in it around the Nardó handling circuit as Lambo finalised the last elements of its development programme – an offer we couldn’t turn down. Being so early, we had to put up with the tornado wrap hiding the true shape of the car. But given the roof snorkel and massive wing, it doesn’t take a genius to work out it’s a go-faster Huracán and you can see pictures of the production car here. Customer racing is big business for Lamborghini. Over the past 11 years the Super Trofeo series has grown from strength to strength and featured 850 drivers, competing in 62 countries across three continents. In GT3, the Huracán has won Daytona three years in a row. The STO takes that knowledge and civilises it for the road. In short, the STO is Lamborghini’s take on the road-going race car market. Think McLaren 620R, Mercedes AMG GT Black Series – that kind of thing.

As is the standard operating procedure for “race car-inspired road cars”, the STO has been to Weight Watchers – shedding 43kg compared to the already lightened Huracán Performante. Not through kale salads, either. Rather all-new magnesium wheels, extensive use of CFRP in the exterior and interior, one-piece carbon door panels inside with feature fabric door pulls, and heavyweight leather has been replaced by Alcantara and “Carbon Skin”. Wonder what kind of moisturiser is best for that?

Is this one last blast for the V10?

Yup. Which is good news for nat-asp enthusiasts as the 5.2-litre V10 remains but is tweaked to deliver even more engine sound at high revs thanks to a reconfigured exhaust. There’s even faster throttle response and power remains the same as the Performante and Huracán Evo at 631bhp, but torque is down from 599Nm in the AWD Performante, to 565Nm in the rear-wheel-drive STO. It’ll do 0-100kph in 3 seconds flat, too. The combination of weight saved and power available gives the STO a marginal power to weight advantage over the Performante, but it’s fair to say that advantage would be negated by a hearty breakfast in advance of your track day. In combination with the purist-pleasing RWD, it’s fair to say the STO deploys the great and the good of the current collective of Sant’Agata’s vehicle dynamic systems and other performance enhancements including rear-wheel steer, torque vectoring, Lamborghini Dynamic Vehicle Integration (the big brain that optimises the settings for maximum performance in your chosen attack mode) Magneride 2.0 (magnetic adaptive suspension), a direct steering ratio, a wider track front and rear, stiffer suspension bushing, and stiffer anti-roll bars.

To optimise the revised hardware, there’s an all-new range of ANIMA settings: STO (for road use), Trofeo (for track) and Pioggia (wet conditions). The STO setting provides the broadest safety net, but one dab of the ESC button will allow greater slip angles before the traction kicks in and saves expensive conversations with your insurer. Any other tech highlight for pub ammo?

Notebooks at the ready? The STO sees the first deployment of F1 born CCM-R braking technology in a Lamborghini road car. These carbon-ceramic discs are developed specifically for road and track use and deliver 25 per cent greater braking power, can handle four times as much heat and reduce brake fade. Combined with the specifically developed brake cooling system fed through the heavily revised front end, you can now lap until the tyres wear out.

Speaking of which, in a change to the normal Lamborghini staple of Pirelli tyres, the STO comes with two Bridgestone Potenza tyre options. 245/20 front, 305/30 rear Potenza Sports as standard with Potenza Race as an option. This new rubber is specifically designed for the STO and features an asymmetric tyre pattern. Nice. I can’t wait until Christmas Day. What does it look like under the wrapping paper?

In a word? Angry. Its presence and visual drama are driven by that Super Trofeo-fed aero. It starts at the front end, with an all-new one-piece “Cofango” front section which, like the Miura, hinges forwards in one giant clamshell to reveal storage space for normal-sized helmets. However, our supersized melon protector didn’t fit…

That centrally mounted air intake feeds air from above the windscreen into the engine bay and combined with the NACA duct and “Shark Fin” central element looks utter race car. At the rear, the STO features the most aggressive and pronounced rear wing delivered on a Lamborghini since the Countach.

This static rear element loses the ALA system featured on the Performante but has three settings to allow adjustment of the aero balance front and rear by 13 per cent depending on circuit/ driver talent demands. Overall the STO delivers 53 per cent more downforce (420kg at 280kph) than the Performante.

Bloody good fun. OK, it probably deserves a little more detail. To set the scene, we had the Nardò handling track to ourselves and Mario Fasanetto leading us in a full-blown Super Trofeo car. A car on slicks… driven by a bloke who knows his way around Nardò blindfolded… and determined to show how easily accessible the STO’s performance envelope is.

The blast past the pitlane down to turn one on the first hot lap behind the Super Trofeo – which fires bits of spent rubber from its diffuser like a shotgun – reminds you in stark definition that all the Huracán staples are present and correct. The V10 has the urgent linear shove accompanied by that pure soundtrack we’ve come to love. Can’t say the sound difference is overly apparent when track driving with a helmet on, but it doesn’t become more shrill as it approaches the redline. Progress is focused through the narrow windscreen aperture and with the V10 at your shoulder and urgent gearshifts you are thrust forwards with relentless pace.

Turn-in for the first corner was 274kph (yowch) and even at these speeds the STO feels stable as you carry as much speed into the first element of the long left-hander before burying the brakes at the apex. Despite a quite staggering stopping performance, the onboard screen showed the brakes are barely warmed. Must try harder.

Direction change reveals that, while stiffer than the previous Huracán, the STO still has a fair amount of compliance in the suspension set-up – where the lead Super Trofeo remains spirit-level flat, the STO compresses on its suspension then begins to rotate at the back end. It’s softer than expected, but this suppleness makes the STO more predictable and playful. As the laps accumulated, and hot shoe Fasanetto increased his speed in the Super Trofeo, the STO revealed itself to be a lot of fun. Over-drive it and it lets you know – being predictable and with enough of a safety net to catch most track day accidents waiting to happen. 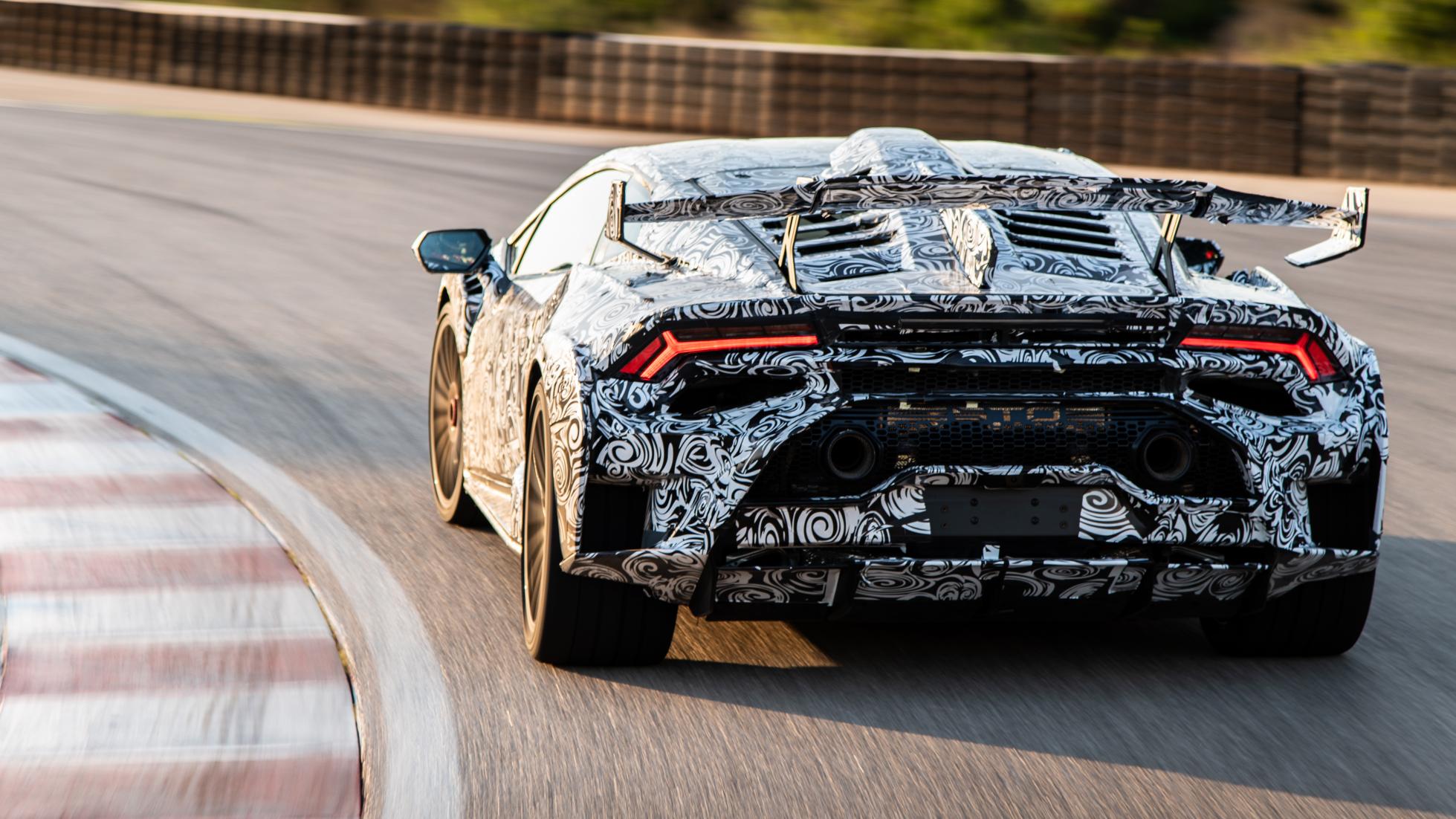 I’m just a racing Billy though, isn’t this a bit too serious for me?

Although the STO lacks the ‘make-me-look-like-a-Driving-God’ mode that the Ferrari F8 or McLaren 720S possess, there’s still fun to be had deeper in the outer edges of its performance envelope. With that ritzy F1-tech, the brakes constantly impress and you quickly learn to brake harder and later than you previously thought possible, turning the green brake disc temperature gauges to their happy place in the orange zone. They’re truly impressive, and despite my best two-footed efforts, they never showed any sign of fade.

On the negative side the steering could do with more weight and resistance to connect you more directly with proceedings – in its current specification in the development car it felt too light, too road car, too remote.

I’d also suggest the creation of a spec option which allows for a far more sparse interior for the full race-car-for-the-road look and feel.

Err… our development car was still “in the final stages of development” so lacked the final polish of the production car interior. It did, however, feature all the hardware and revised infotainment the STO will have. The headline HMI change is its ability to deliver a hugely detailed level of nerdy data on tyre, brake and fluid temperatures, as well as tyre pressure, which will be handy at your local track day or on a particularly committed school run. In addition, onboard telemetry combined with cameras will allow you to film your favourite circuit laps and analyse them to improve your skillset, or become a YouTube millionaire if you shunt it coming out the pit lane.

The production car will feature much use of that “Carbon Skin” (on reflection, we reckon oil of Olay would be a good moisturiser for silky carbon skin) and personalisable options for interior trim and, despite carbon door panels and four-point harnesses, it feels very plush inside. This is a road car first and foremost – those expecting a stripped-back bare-bones GT3 approach may find it too soft and luxurious. Come on then, what’s the verdict of the most focused Huracán to date?

If you think you’re getting a Super Trofeo car for the road you’ll be disappointed, the STO is far more civilised than any racing car would ever have the luxury of being. What the STO delivers is the technological distillate of thousands of hours on the track civilised for the road. Its ability to be just at home obliterating your local track day for as long as you care to throw fuel and tyres at it and then be equally happy on your favourite road will appeal to many. Plus, as we charge towards electrification and silent progress, there’s a lot to be said for the shouty sensory overload the Super Trofeo Omologata delivers. 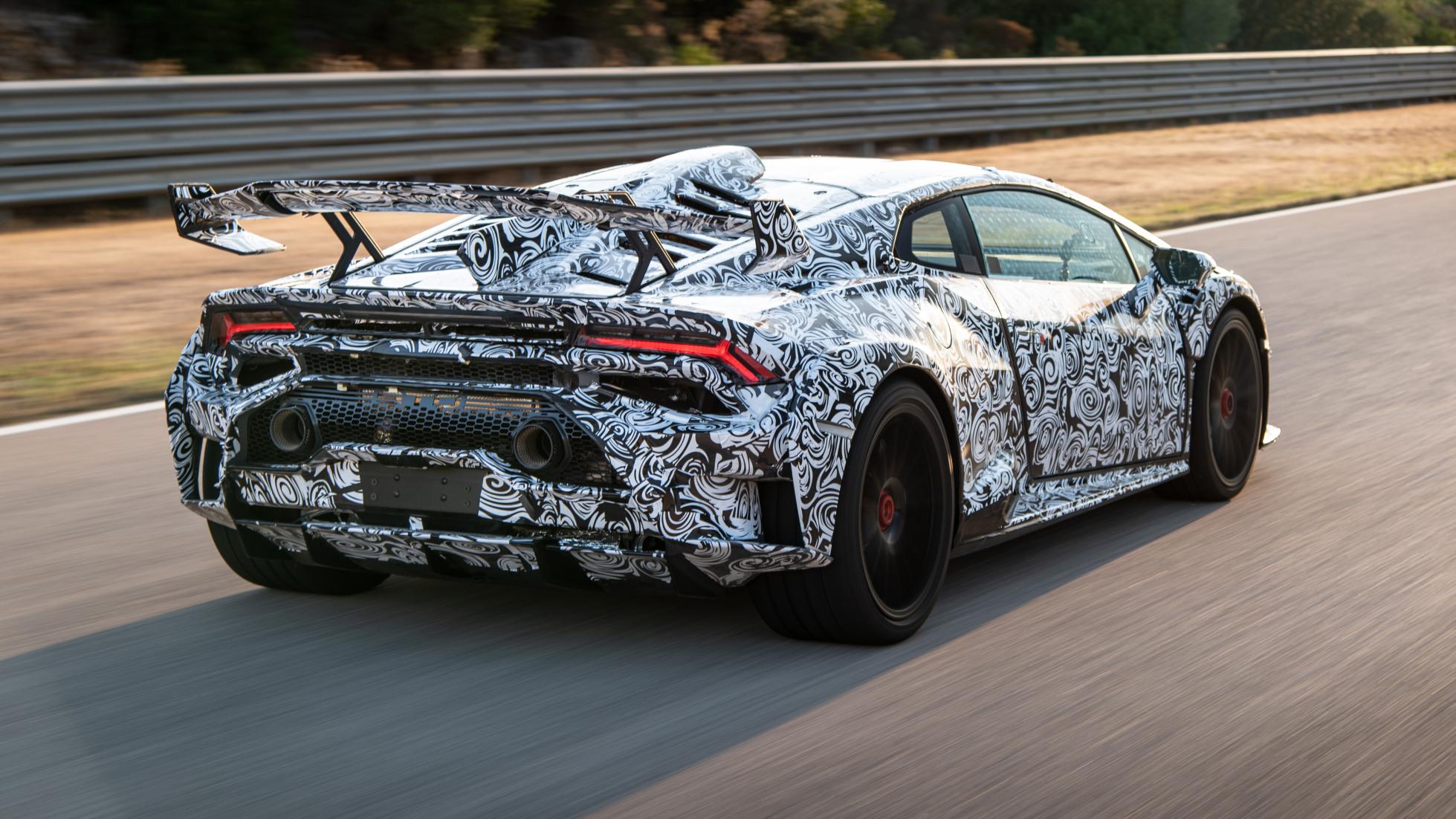 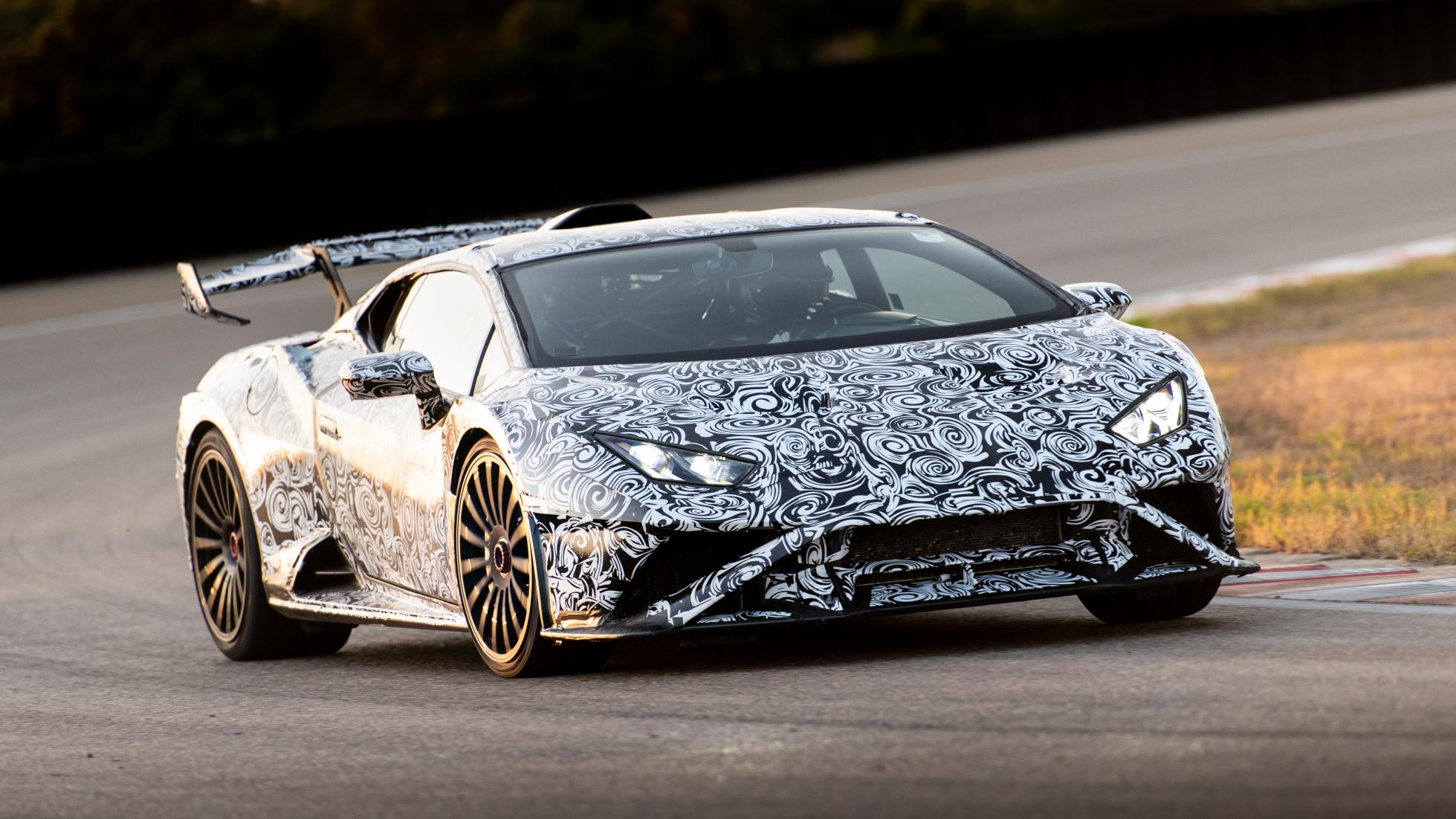 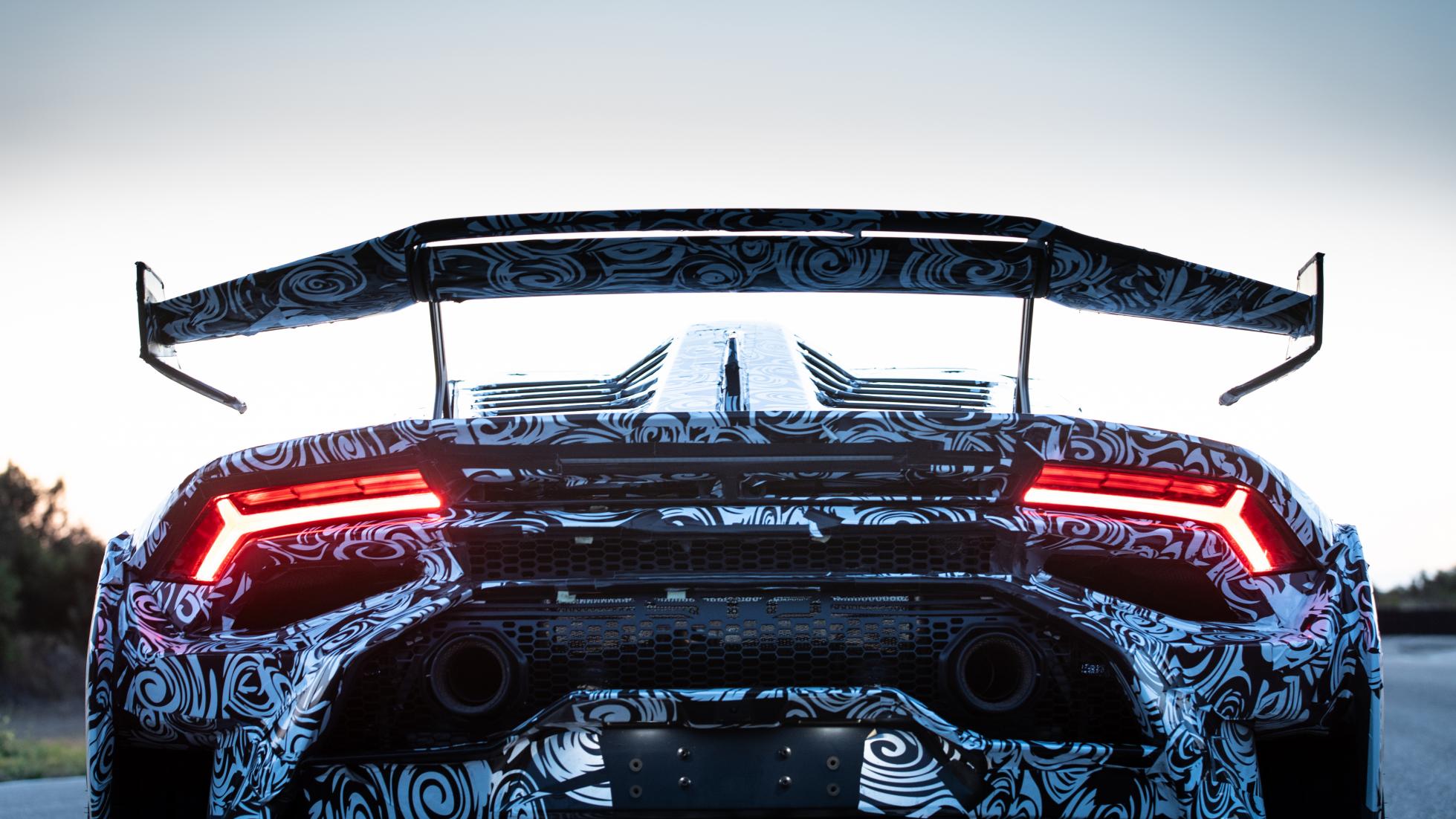 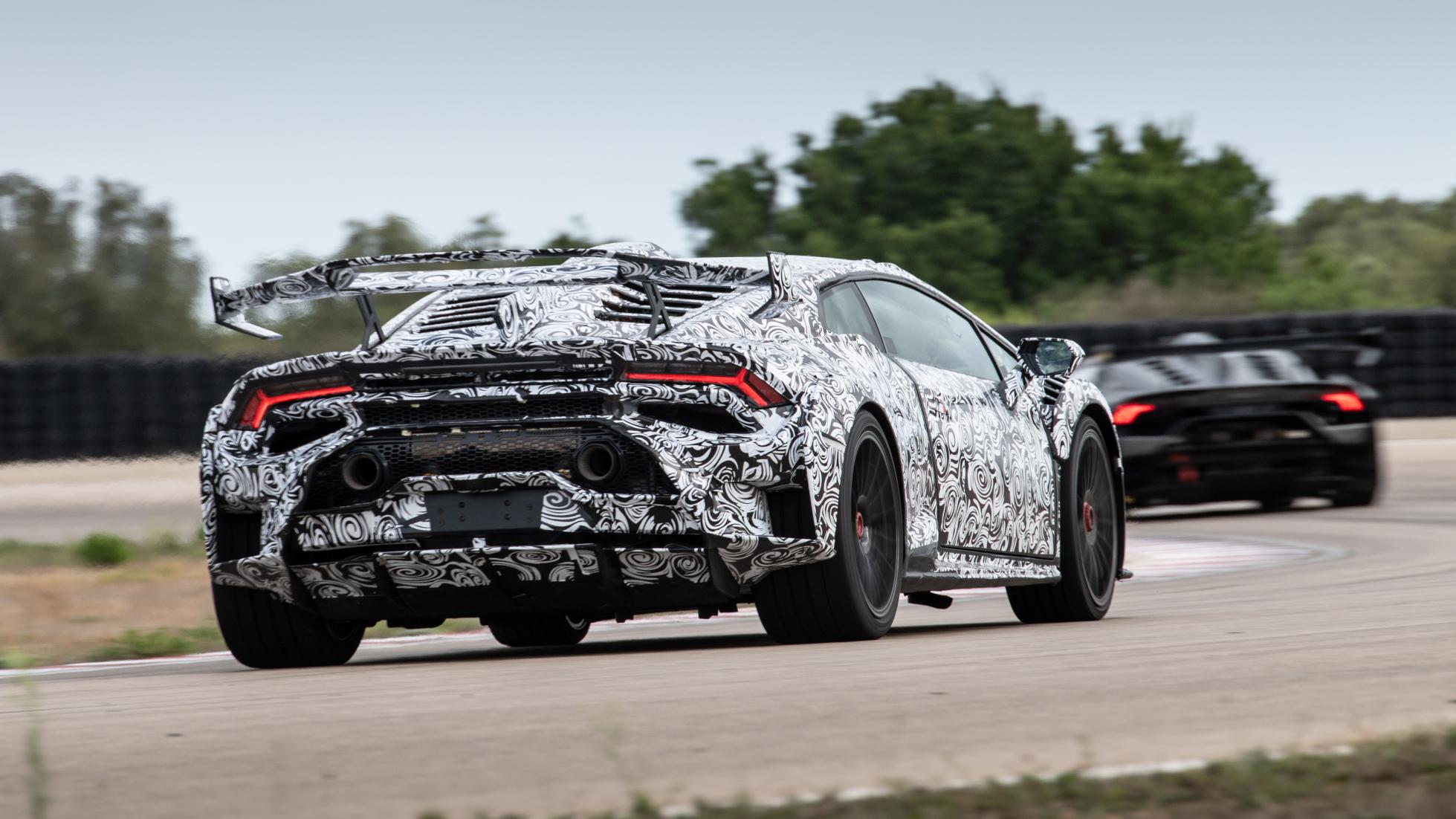 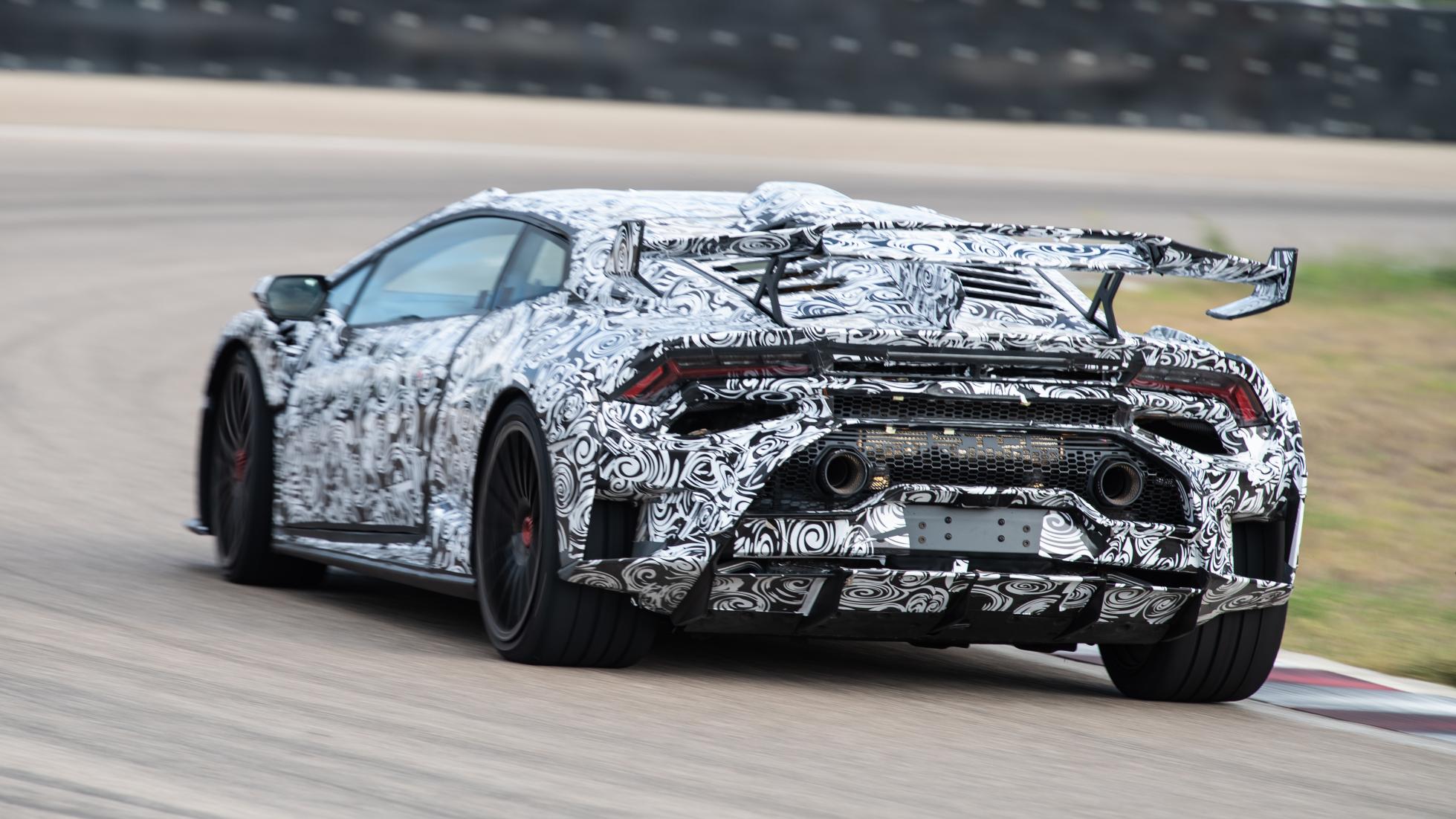 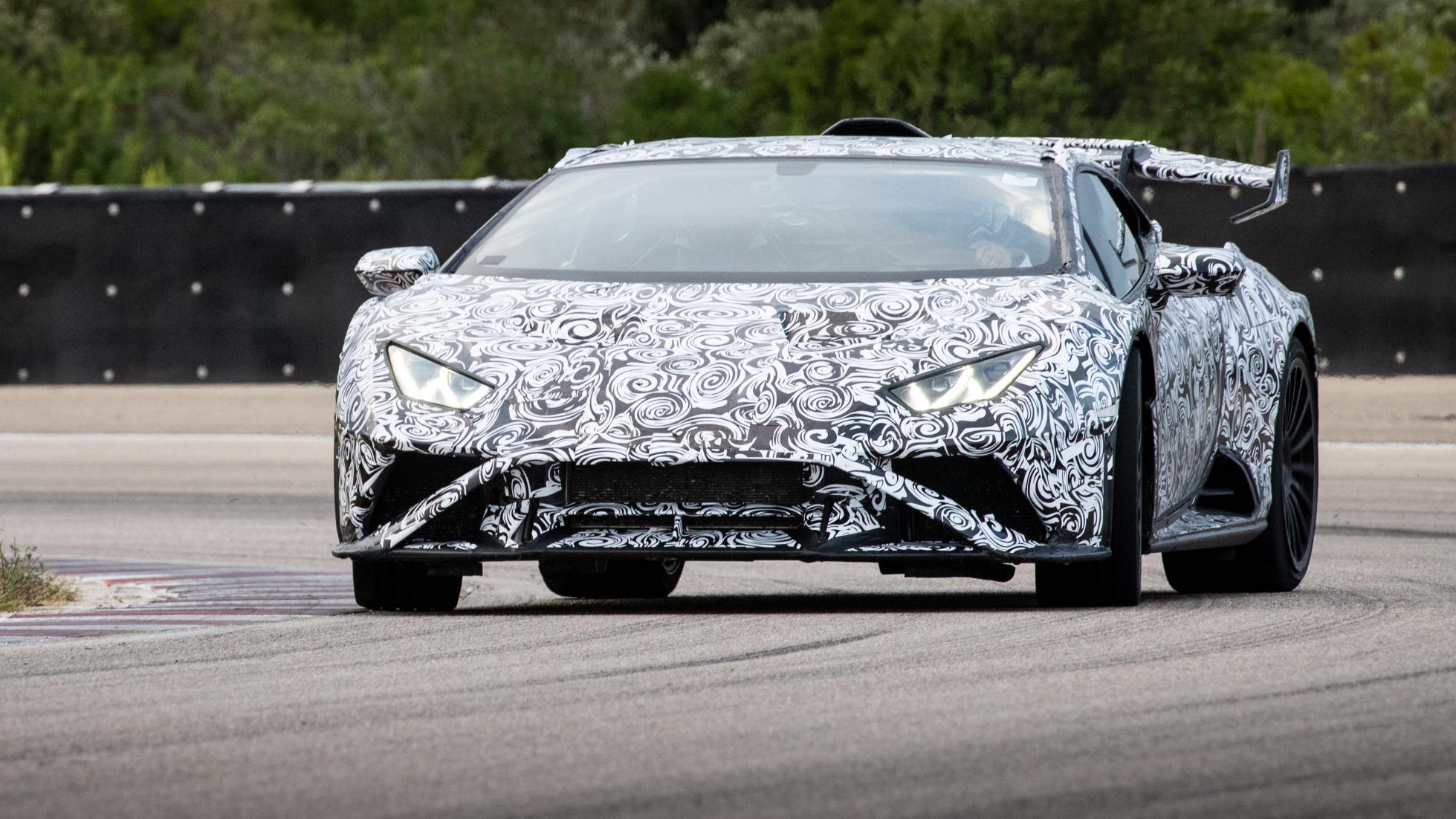