Hurrah! The Alpine A110 is finally here 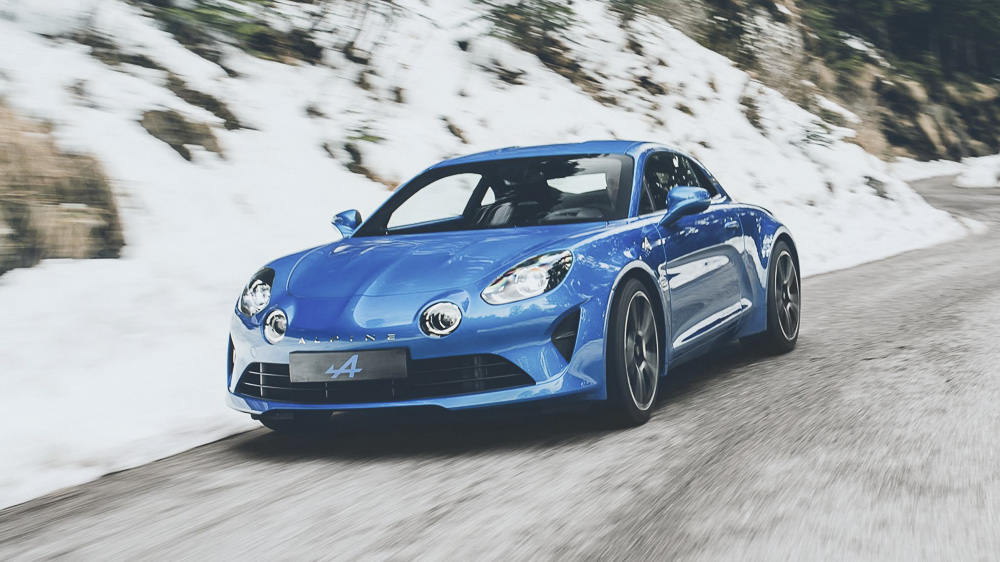 At last! It’s the Alpine A110 in production form. Renault has been teasing and titillating us with pesky details and pictures for a long time. But at last, at the 2017 Geneva motor show, the whole car has broken cover.

We think it’s very pretty. You may not. Either way, isn’t it brilliant to have another proper mid-engined rival for the Porsche Cayman, with only the mixed-bag Alfa Romeo 4C and overly hardcore Lotus Exige to speak of otherwise? 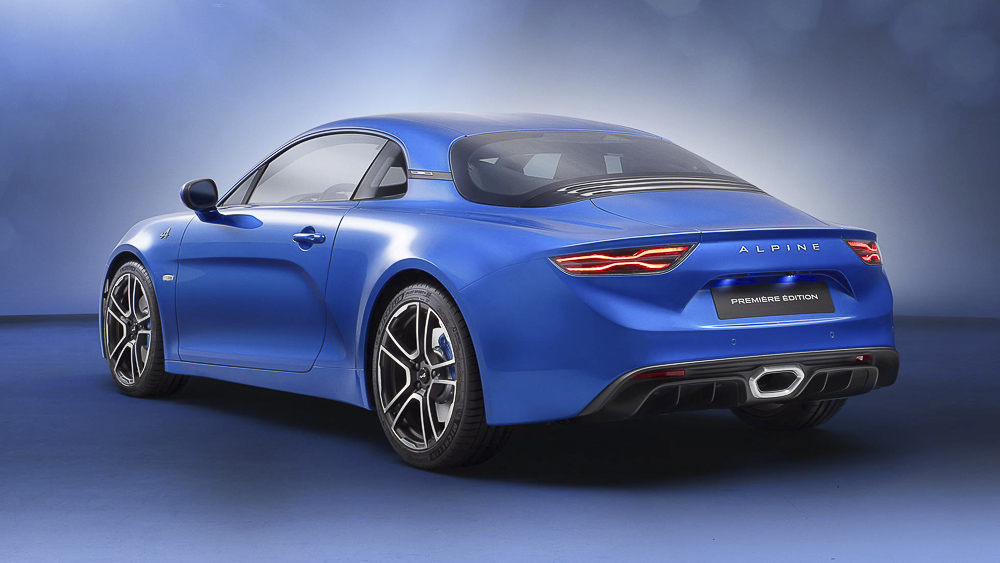 Both its name and styling are unashamedly retro nods to the original – and incredibly dinky – Alpine A110. The new car is inevitably larger (and sits between a 4C and 718 Cayman in size) though at just 1,080kg, it’s pleasingly light.

All the better for making best use of its engine. Like its two closest rivals, it uses a four-cylinder turbocharged petrol engine, here a 1.8-litre producing 249bhp and 320Nm.

Linked exclusively to a paddleshift gearbox – a twin-clutch setup with seven speeds – it’ll complete 0-100kph in 4.5secs, which is 0.1sec quicker than a near-100bhp healthier 718 Cayman S. The Porsche is over 32kph faster overall mind, with the A110’s top speed electronically limited to 250kph.

Normal, Sport and Track modes alter the engine and transmission’s responses, as well as stability control settings, steering weight and exhaust noise. But if that sounds a bit complex, performance car nerds can delight at a spec list that reads like a who’s who of performance car components: the brakes are Brembos, Getrag makes the gearbox, the 18in wheels are by Fuchs and the seats are Sabelts.

And the fundamentals sound right, too: mid-engine, rear-drive and with a 44/56 weight split towards the rear, both fuel tank and engine sitting within the axles. The fancy fuel filler cap should identify which end the former sits at… 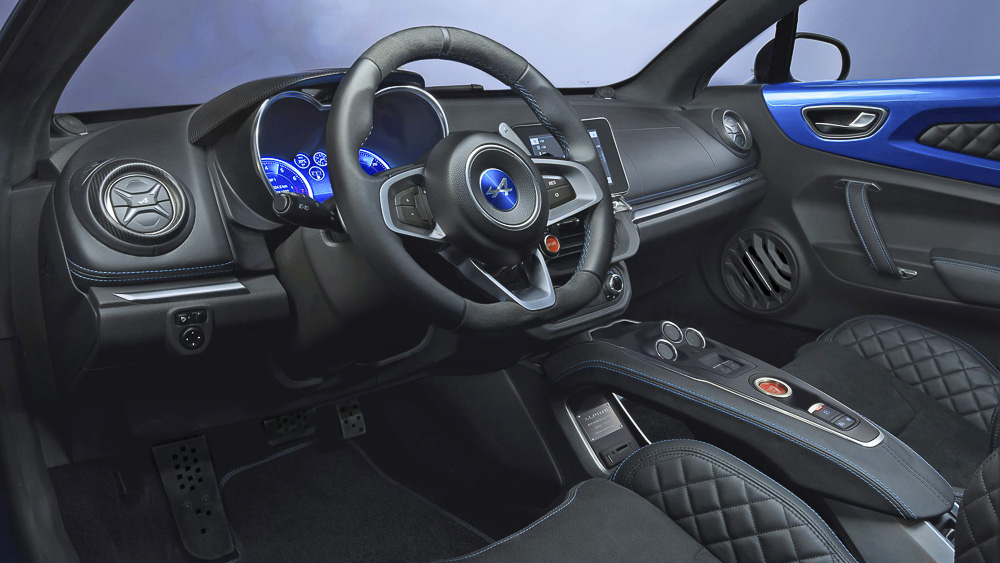 The lights are all LEDs, while the interior is a mix of carbon, aluminium and leather, and Alpine is promising plenty of room inside. Luggage space is 196 litres (split almost equally between front and rear compartments), which is less than half what you’ll get in a Cayman. At least fuel economy is better, the Alpine’s claimed 45mpg (6.3L/100km) a whole 20 per cent better than the thriftiest Porsche.

The A110 launches as a Premiere Edition, of which 1,955 will be made. You’ve a choice of blue, white or black paint, with a numbered plaque to mark out how special yours is. For 58,500 euros, ‘very special’ is what you’ll want. That’s the A110’s provisional price tag in France, though no UK cost has yet been forecast. Expect little change from £50,000, though. 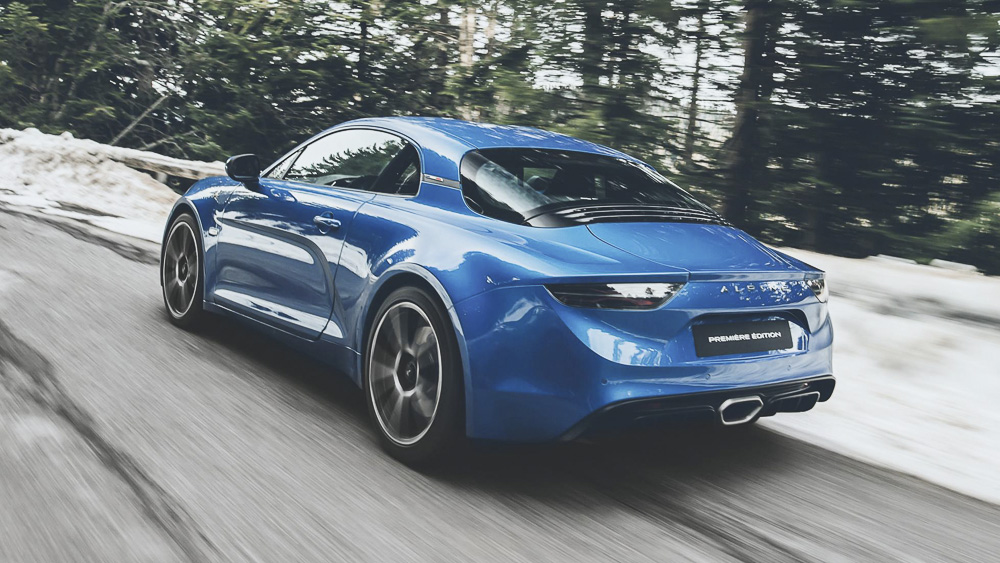 For reference, a 718 Cayman starts at a whisker under 54,000 euros in France, though we’d imagine it’d sail past the Alpine’s launch price with equivalent options. Regardless, all left-hand drive Premiere Editions have sold out, so Alpine’s doing something right.

It will be made in Dieppe, a move which, lest we forget, stopped Renault Clio RS16 production from happening. Another fallen hero worth noting is the Caterham C120, which came close to being the A110’s cousin. As the surviving car of the project – and with months of teasing behind it – lots of weight rests on this Alpine’s pert little shoulders, then. Reckon it’s up to it?