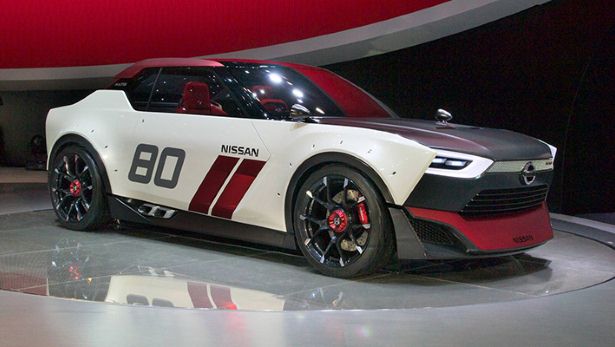 Nissan’s pulled some silky sheets off these two rear-drive concepts – the IDx Freeflow (in brown, above) and IDx Nismo (in white). No prizes for guessing which is which. They'd been kept well secret beforehand, and lobbed a cheery little firework into the middle of the Tokyo show.

They might not be just concepts either. There's a genuine will – and willingness – in the company to get something spun from them into production. Top Gear has heard it from the very top.

Scrapyard regulars will notice many hints of the late-sixties Datsun 510, but these two showcase have been designed in conjunction with 100 young people –“digital natives” (as the manufacturer insists), all born after 1990. It’s an attempt to reengage da yoof with cars, because especially in Japan they they think cars aren’t cool any more.

There's the usual clod of connectivity stuff. Nissan sees the Freeflow being powered by either a 1.2 or 1.5-litre engine that use a CVT, leaving it pretty limp in the performance stakes, but keeping the cost of motoring down. For the same reason, it's compact, just 4.1 metres long and 1.7 metres wide.

Then there’s the Nismo. Which is is half a meter wider, and has lots of SPORT things like carbon fibre trim and a side exhaust and 19-inch wheels and bolt-on wheelarch extensions. Nissan reckons it’d go nicely with its DIG-T turbocharged 1.6-litre petrol engine strapped to a CVT.

Team Top Gear stood and played a hugely enjoyable game of spot the reference. We got the early Datsun Bluebird 510, we got Fiat Twin-cam Mirafioris, we got Ford Mexico rally cars and the BMW 2002 and 1970s J-racers. And yet both IDx flavours look modern too.

They also reminded of us of the Chevy Code 130R concept from Detroit in 2012, and that was built to answer similar questions as the IDx.

There's tremendous finesse in the chiselling of the IDx's surfacing and the joints around the cap roofs. The details and jewellery are exquisite, with lovely simple steering wheels and aluminium switches and dials in pods. The Nismo version shows how owners could tizz up their cars with a bounty of accessories.

We bumped in Shiro Nakamura, Nissan's design director. How come a car designed for the young gives so much joy to people old enough to remember the 1960s? "Yes of course. It's for the old as well as the young. But we have that heritage and history so we can use it."

Does it have to be rear-drive? "Has to be. Has to be. For the proportions." OK, but you don't have a small RWD platform. "We have the Z. But yes, that's too big and expensive. So we would have to work hard on that."

Are you going to build it? "Talk to the boss. I want to. Really."

Five minutes later we were indeed talking to the boss, having grabbed a passing Carlos Ghosn. Same questions for him: why make such a big deal that it's a car for the young when it appeals to older fans so much too? "The young don't want to be seen in a car for old people." In other words, please the young and aim it at them. The rest will follow.

So will you build it? "We don't just build what we like, we build cars that you guys, the public, likes. There has to be a business. But if we get a great reaction with the concept, that makes a business." Is it technically feasible, if you don't have quite the right platform? "Of course it's feasible, if we know we can sell the right numbers to make a business."

So there you go. Lobby in the space below. If enough people want the IDx, it'll get built.