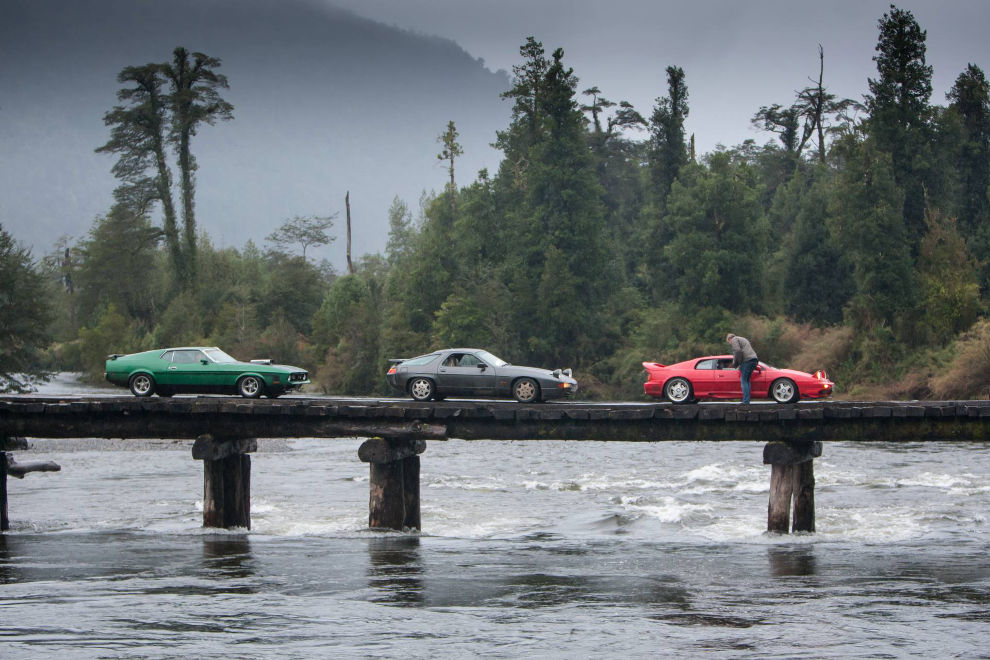 If you follow Top Gear in any way, shape or form, you won't have missed the hoo-hah that's kicked off following our recent filming in Patagonia. That's probably the most boring opening sentence I've ever written for a blog, but this week isn't the time for mirth and levity.

We've been accused by just about all of the press of setting out on that shoot knowing full well one of our cars was sporting a number plate that makes a nudge-nudge reference to the Falklands War: "H982 FKL" to be precise.

As a consequence, therefore, we got the stoning that we deserved when we were chased out of Ushuaia, a city where bitter feelings about the Falklands War run strong and deep.

As it happens, we didn't put that number plate on deliberately – Jeremy has said so in print, James has said so on the radio, and Richard will be saying so on the radio again next week. Sadly I doubt their words will make one iota of difference to the newspapers, because our guilt is a lot more newsworthy than our innocence. In truth, though, the four of us and the rest of the team are much more concerned about what our audience believes.

I've read quite a few comments from viewers who are equally convinced we put the plate on deliberately, and I can understand that. We are, after all, a show known for getting into hot water through our antics, and now we're protesting our innocence over this affair, we're seen as merely crying wolf. I can also empathise with people who believe it's exactly the sort of stunt we'd pull – cheeky number plate, wind up the locals, no harm done.

The truth is, however, this is most definitely not the sort of stunt we'd pull. For starters we would not base a joke around soldiers in conflict. Anybody who knows Top Gear knows how much work the presenters and the show does for Help For Heroes, and in our eyes soldiers are soldiers whatever the uniform.

Secondly, we set out on that trip to shoot a two-hour Christmas Special. It's the most important film we make all year, and we would not plan such a crucial undertaking based on a number plate joke. Because, if you think about it for a moment, that's precisely what we would have had to do.

We would have had to gather the whole team and say: "Sod what the cars are for this trip, just find one that's registered with a number plate containing 982 and FKL." The plate was a genuine plate, remember, not one we made up.

So our researchers would have got on the phone to the DVLA, asked them if such a car existed, and then when the DVLA came back and said, "There is, actually, on a Porsche 928," we'd have then asked for the details of the owner.

At this point the DVLA would have refused, because that would be a contravention of the Data Protection Act (and they don't pass on requests the other way to specific owners). So let's say we persevere and obtain, probably illegally, the details of the owner of that car.

Then what? Then we would have to knock on his door and try and persuade him to sell us his car. And all this because we're desperate to find a number plate with joke numbers and letters on it. It's just nonsense beyond belief.

So let's say we did know what cars we wanted for this shoot – V8 sports cars, as it happens. We would then be saying to the research team: "Make sure the Porsche has a number plate with that combination of numbers and letters."

Right. Do you know how many Porsche 928GTs there were for sale when we were looking? Two or three, tops. The odds of one having the number plate we "wanted" are millions to one. The plate was genuine, remember, not one we had made up.

I explained all this to a chap from one of the national newspapers and he came back with a good question. "OK," he said, "if it wasn't deliberate, why didn't you spot it and do something about it before you left the UK?"

Fair point, given we're a car show. The fact is though, we didn't. There were a core team of around four people in the office working on putting together the Special, and their priorities were getting the cars bought, mechanically checked for time-bombs and shipped to Argentina, with all the paperwork that endeavour requires.

On top of this they were booking crews and sorting hotels, fixers, camping, filming permits, crew travel, carnets, risk assessments, filming cars, props, mechanical back-up, the lot. Not only did they not have time to scrutinise number plates, but the eldest of the team was around six when the Falklands War broke out, so it's not going to resonate even if they did see the plates.

As for me and the presenters, the older mob, we're swamped with our own work too and likewise not looking at plates.

The truth is the first time we realised the plate could be a problem was on the third night of our shoot in Argentina (19 September, I believe), when Jeremy was scrolling through Twitter and spotted a comment on one of the auto fan sites, next to a photo of the plate. I remember his surprise and concern.

There are other witnesses to this fact. In fact, one of them – a mechanic we were using for the first time – has written to the Telegraph Letters page stating he saw Jeremy's reaction and that it could have been nothing but genuine. (Weirdly, although he's chased them, the Telegraph has so far not bothered to print his letter.)

Knowing this could be a problem, our office spoke to the local authorities in Ushuaia, the town where the war issue was most sensitive, and where we would end our trip in ten days' time with a massive game of car football. We agreed with those authorities that the plates would be removed before we entered the town, and it was at this point – not before we left London – that we decided to get the BE11 END plates made for Jeremy's car for the football match in the town.

Before we entered Ushuaia we duly removed the H982 FKL plates from the Porsche. For a day or two, the plate on the back said H1 VAE (the plate left there, underneath H982 FKL, from when one owner had privately registered the car). An advance party of our guys had been in there for a few days already, prepping the football game with no problem whatsoever. The local ski resort was looking forward to us filming there too.

There was nothing in the air to suggest trouble was brewing until the Argentinian veterans arrived and kicked off. We apologised that the existence of the plates earlier on would have caused offence. We explained they were now gone, and that they had not been a deliberate act. They didn't believe us, told us to leave town or face the consequences, we did that very thing and drove into a night of violent terror.

That is how it all happened, and I would welcome the most rigorous investigation in the land to scrutinise our conduct in this affair. I probably won't convince Damon Albarn, because he was happy to make his thoughts known before he heard our side of the story. But if I can get our point across to any one viewer, I'll be content.