This is the fastest accelerating Golf ever 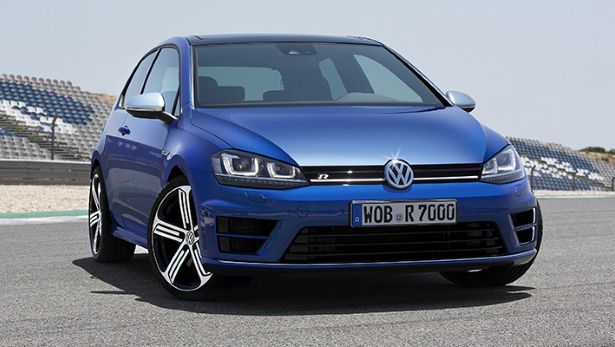 The VW Golf is well known for doing the day-to-day very well; Top Gear's default recommendation to just about everybody. And there are plenty of model variants to ensure the pickiest have their needs met. Want a fuel sipper? Go for the TDI Bluemotion. Got to carry children/pets/white goods? The Golf Estate. Like to go fast? Have the GTI. Like to go fast but don't have much money? Get the Golf GTD. But what happens if you want to go REALLY fast? Then this new 296bhp, sub-five-second-to-sixty Golf R is the one for you.

VW's flagship hatch uses the same engine as the GTI (the EA888 TSI unit, suck, squeeze, bang, blow fans) but it's been fettled dangerously close to 300bhp and 380 Nm of torque. They've played with the cylinder head, exhaust valves, pistons, injection valves and turbocharger in pursuit of power. When the engine's connected to a manual gearbox, it'll do the 0-100 sprint in 5.3secs. And if you spec the optional DSG dual-clutch ‘box which instantly Frisbees the next gear into place, you can do it in 4.9. Making this the fastest accelerating Golf in history.

Happily, they've made the car faster and more frugal. Despite that 36bhp bump in power, VW claims that the car is up to 18 per cent more efficient than the last Golf R. This is due to little tricks like the Haledex four-wheel-drive system's ability to run just the front wheels, dragging the back ones along when not required. And if you want the rears back working, they'll power up in a split second, and up to 100 per cent of the Golf's power can be sent back there. Which considering you can now turn the stability control system completely off, sounds interesting. And potentially smokey.

The suspension has also been beefed up with new spring and damper rates to cope with the increase in power. You'll also notice that it sits a bit lower than the normal Golf - 20mm to be precise - and there are a host of other sporty visuals for car park cred: things like the quad chrome exhausts, new front and rear bumpers, bi-xenon headlights and smattering of R badges inside and out.

If you want to smell the optional Nappa leather interior, or see if your ribs slot in between the Alcantara bolstered sports seats, you'll need to hop on a flight and get to the Frankfurt motor show next month.