This is a Toyota FT-1 racing car 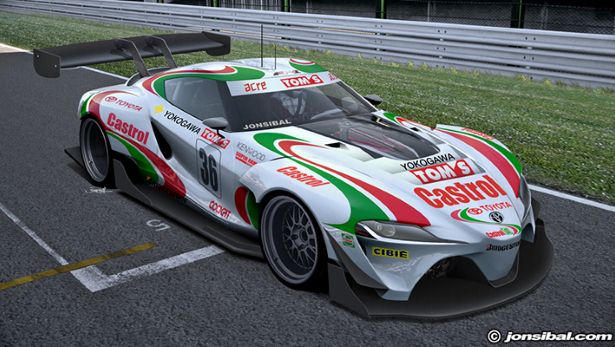 This isn't real. It's a concept sketch of how the Toyota FT_1 concept car might look had it been built as a GT500 race machine and liveried in one of Toyota's all_time classic schemes. Simply put, then, it looks glorious.

Rendered by TG.com's good friend Jon Sibal as a work of fantasy, the render _ remember, IT'S NOT REAL _ takes the hyper_hyper FT_1 concept car that took everyone by surprise at last week's Detroit Motor Show, and makes it fighty.

That livery is a knowing nod to what many believe the FT_1 represents: a new Supra. Don't forget, the last Toyota Supra _ that's the Mk IV _ raced in the All_Japan GT Championship that was inaugurated in 1994, where modified production cars knocked seven bells out of one another.

In 1997, the Mk IV Supra, clad in TOMS livery, lined up in the GT500 class against things like the Honda NSX, Lamborghini Diablo and Nissan Skyline, using a 2.0_litre 16v engine tuned for over 480bhp.

With Michael Krumm and Pedro de la Rosa behind the wheel, this Supra fought a hard campaign but emerged on top _ and victorious _ thus establishing itself within the Toyota Supra Appreciation Society as a bona fide legend. It would later star in Gran Turismo, too, giving it greater longevity amongst the gamer community. This is a community you do not want to upset.

So we're quite glad Jon has reimagined the FT_1 as a racing Supra, because it looks superb. Of course, the FT_1 isn't a Supra. But good god, if it were..