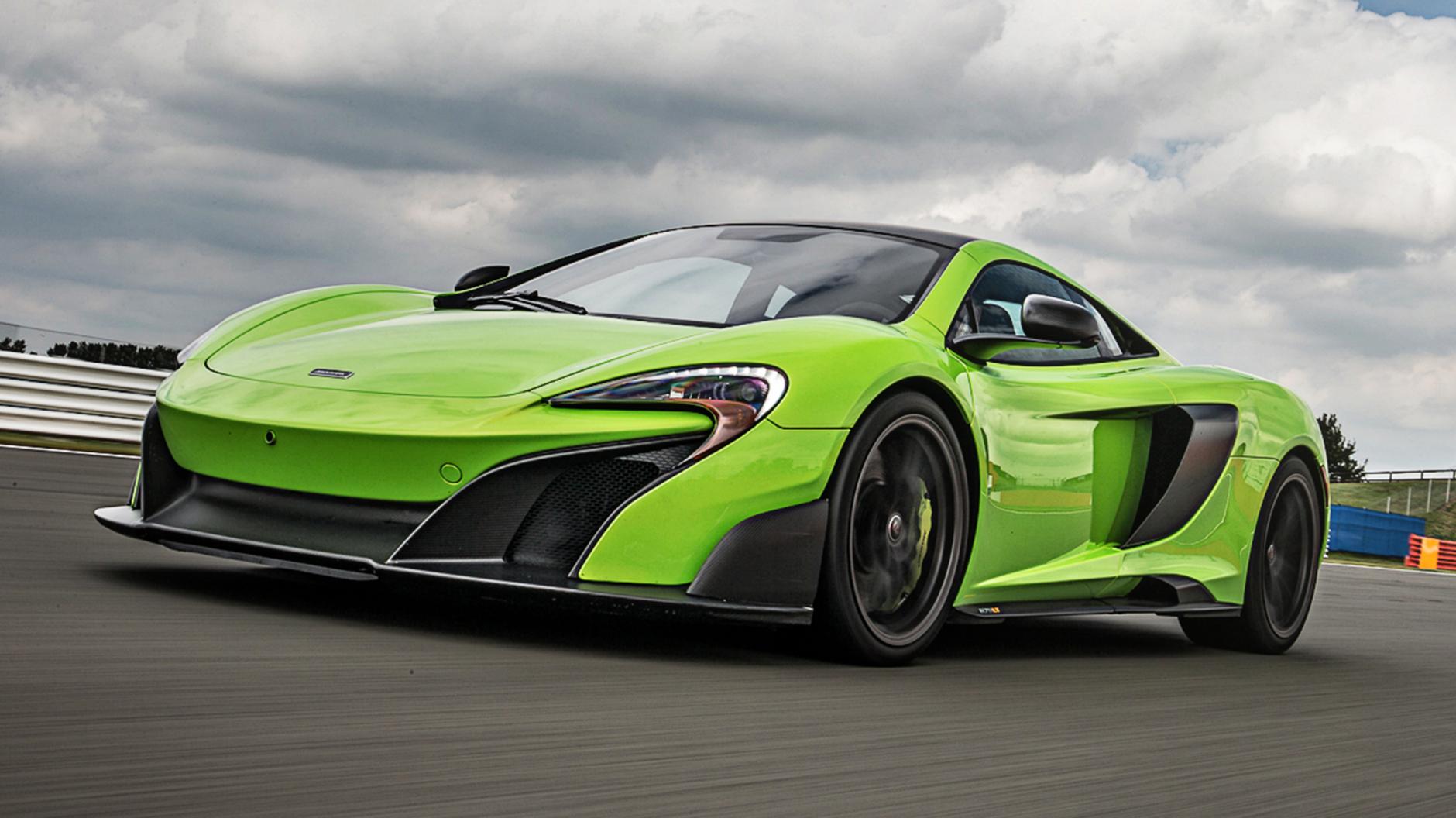 Another 'new' McLaren?
Yes. And we're going to cut to the chase – the 675 LT is the best McLaren road car since the original F1. This is the one we've been waiting for.

Really?
Really. To be reductive about it, the 675 LT – it stands for Long Tail, a tribute to McLaren's reworked 1997 endurance racer – is McLaren's answer to the Ferrari 458 Speciale, a lightweight, more powerful track-focused limited series car, absolutely dripping with aerodynamic know-how.

McLaren has always been great at numbers, and slightly less brilliant at the emotional stuff. Didn't Ron Dennis say he 'could scientifically prove' the 12C was the best super sports car in the world'?
Indeed he did. That's why the 675 LT is such a revelation – because they've figured out how to be comfortable in their own skin.

There was always a sense that the Fun Police were on standby at McLaren, wondering why the hell anyone would want to get a car sideways.

Well, plod has been given his marching orders. And the LT has an ESC button that can be firmly switched off. And it has a dead simple launch control mode. What a rebel. 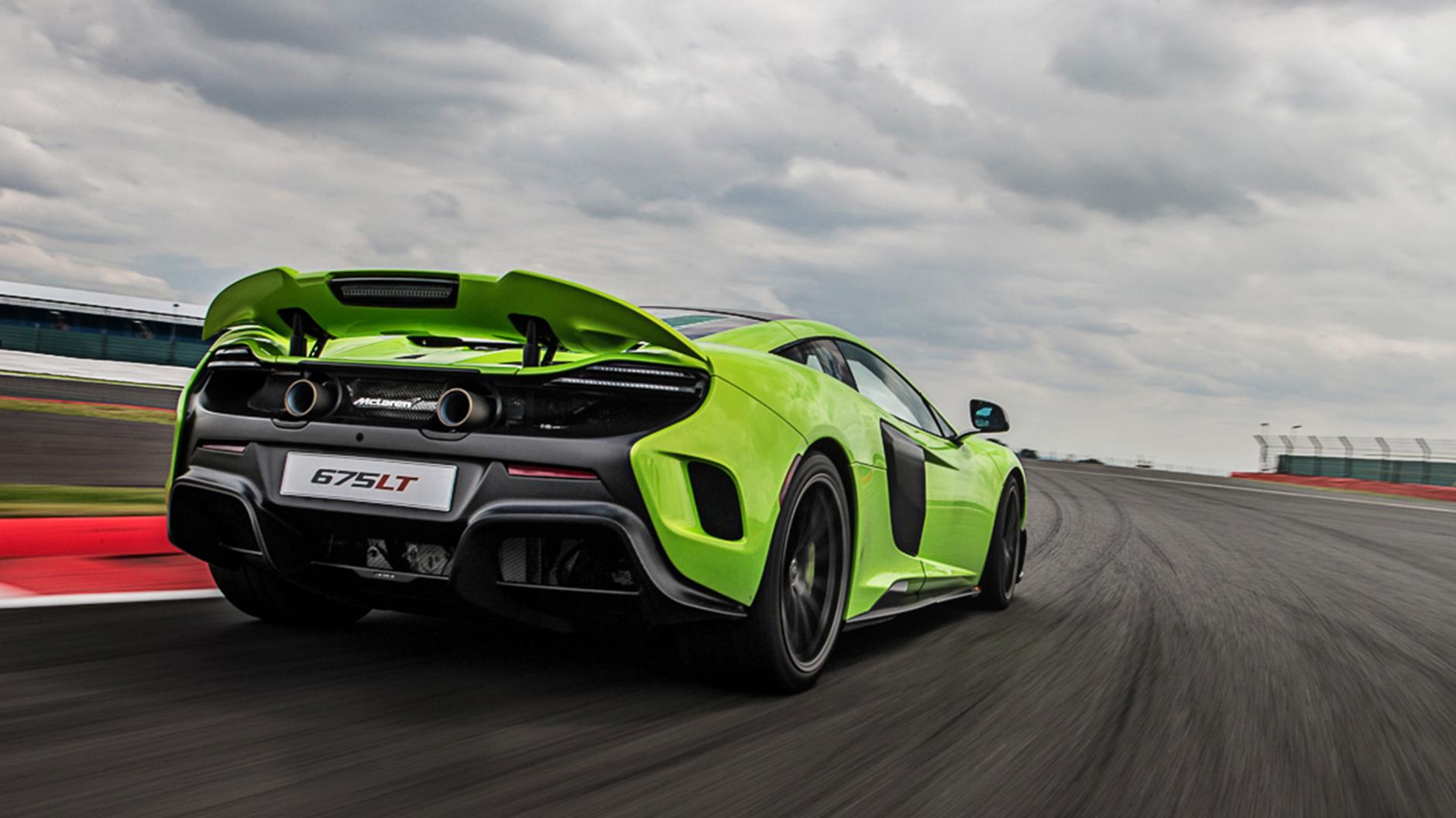 Fantastic. So now McLaren have become anything-goes hippies?
Hardly. After a 45-minute immersion, it's difficult to think of a road car that's more focused or intense than this.

It's the work of some very clever people, and the form/function thing hasn't been completely kicked into touch. They've just lightened up a bit.

Sure, an unrepentant purist might still grumble about the fact that the engine uses forced induction and isn't normally aspirated, but – more numbers – only a total berk could find fault with 666bhp (at 7100rpm) and/or 516 torques (between 5500rpm and 6500rpm).

The 3.8-litre twin-turbo now has lighter connecting rods and camshafts, and a reprofiled titanium exhaust (in fact, 50 per cent of its components are new).

What about the non-fast parts of the supercar experience?
They're the best bits, to be honest. A hefty percentage of this car is effectively new, even if it looks like a modded 650S, and you can genuinely feel them work for you.

The front bumper has a bigger splitter and new end plates, the under body is new, the side skirts are reprofiled, the side air intakes are new, as is the lower panel on the rear bodyside, the rear wings are different, the rear screen is polycarbonate, and the airbrake is 50 per cent bigger and more effective.

The aero detail is immense for a road car: for example, the dirty air around the front wheelarches is, says McLaren, 'cleaned' as it's channelled towards the rear of the car by the side skirts (they're made of carbon fibre, by the way, as is most of the LT).

The second side intake funnels cooling air into the radiators: they're the same size as the ones you'll find on the 650S, but the angle has been increased from 15 to 19 degrees to make them more efficient.

Efficient! It's all about efficiency, isn't it?
Yes. And no. Here's another example. The LT's front and rear track have been widened by 20mm, to promote improved grip and overall agility, and the ride height at the front has been reduced by 20mm, so that it cleaves the air at a more rakish angle.

This in turn gets rid of the air at the back of the car more, er, efficiently, and makes the rear diffuser work harder. All of this aero activity moves the centre of pressure forwards, resulting in superior front downforce. Or so the McLaren guys tell us. 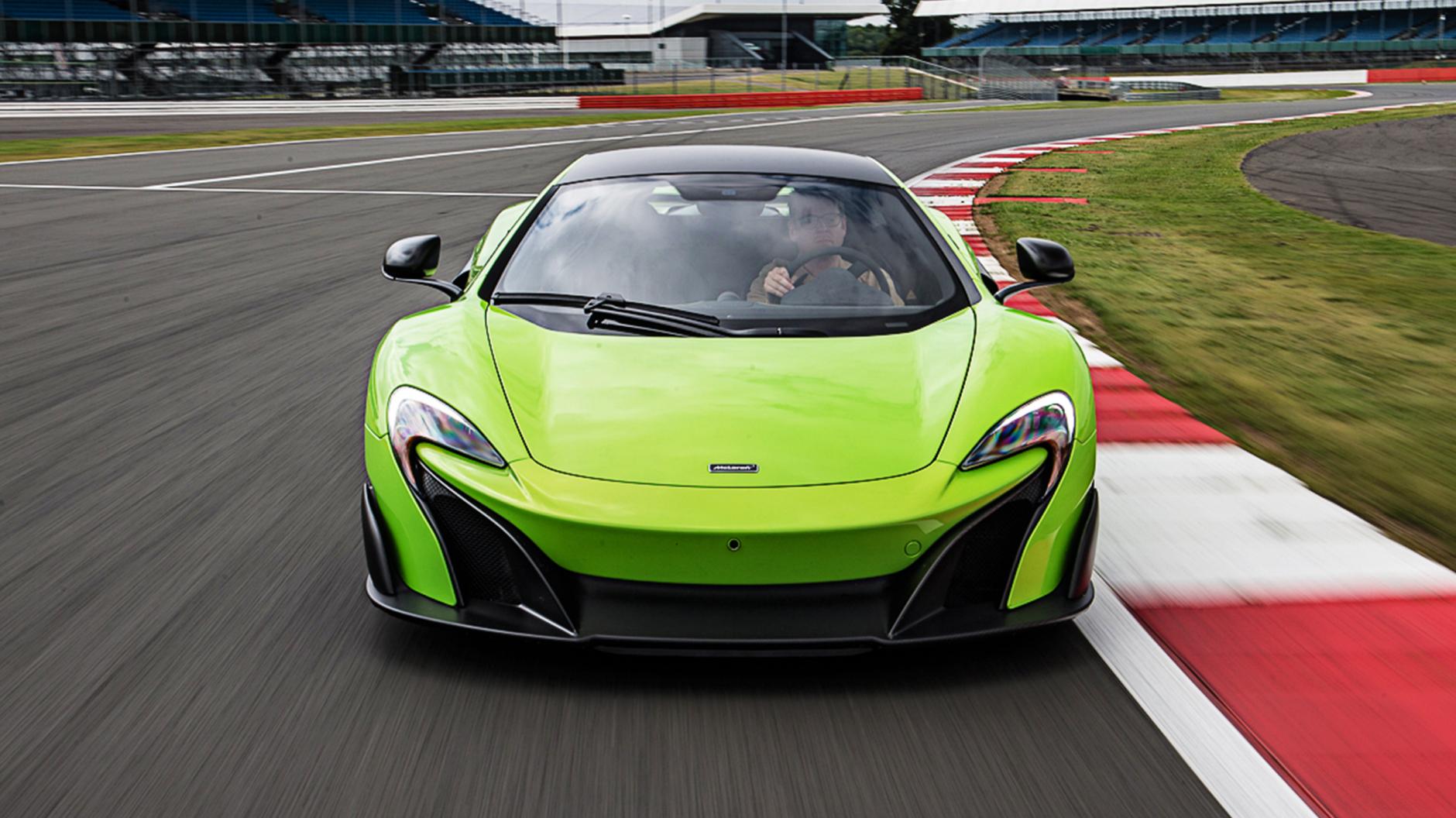 So how does it feel?
So good it's genuinely tricky to describe. But 'feel' is the word.

A lot of contemporary supercars have such high limits – of adhesion and performance – that it's difficult to get close to them without being superhuman or going toe-to-toe with the Grim Reaper.

The 675 LT is no Caterham Seven, but a faster rack means that the steering is sublime and the linearity of its major control responses – primarily the throttle – is superb. The brakes are unchanged, but have perfect feel.

Like the 650S, the LT uses McLaren's ProActive Chassis Control (hydraulically interconnected dampers) and Brake Steer, but the Normal, Sport and Track settings have all been reworked to deliver edgier responses. The suspension features new and lighter springs all-round, with uprights and wishbones derived, says McLaren, from the P1.

The 675 LT also benefits from bespoke Pirelli P Zero Trofeo R rubber, 235/35/R19s at the front, 305/30 R20s at the rear, which offer precisely six per cent more grip than the regular ones, while the forged alloys are even lighter than the rims fitted to the P1.

The result is a car that attacks corners with an insatiable hunger, relaying every morsel of information into the palms of your hands, while remaining astonishingly composed over sudden crests, surface imperfections, or ugly camber changes.

Rarely have compliance and cornering agility come together to such spectacular effect.

Wow. Anything else?
Hell yes. It's so useable, despite its huge performance. The 675 LT has a low cowl, and the driving position is pretty much perfect, so you can position it on the road like it's an earthbound Eurofighter.

It's also relatively compact, so you're not fidgeting nervously against the white lines or hedges. It fits, and its turn-in is possibly the best we've ever encountered on a road car.

And its transmission is equally mighty. It's fast whatever the setting, but in Track mode, with more than 5000rpm dialled up and 60 per cent throttle, McLaren's 'Inertia Push' tech delivers what it calls an 'impulse of torque' as the next gear is engaged.

Shift times are just 40ms, but the key thing here is that the driver isn't left in the cold. It's like being invited into the heart of a chemical reaction. 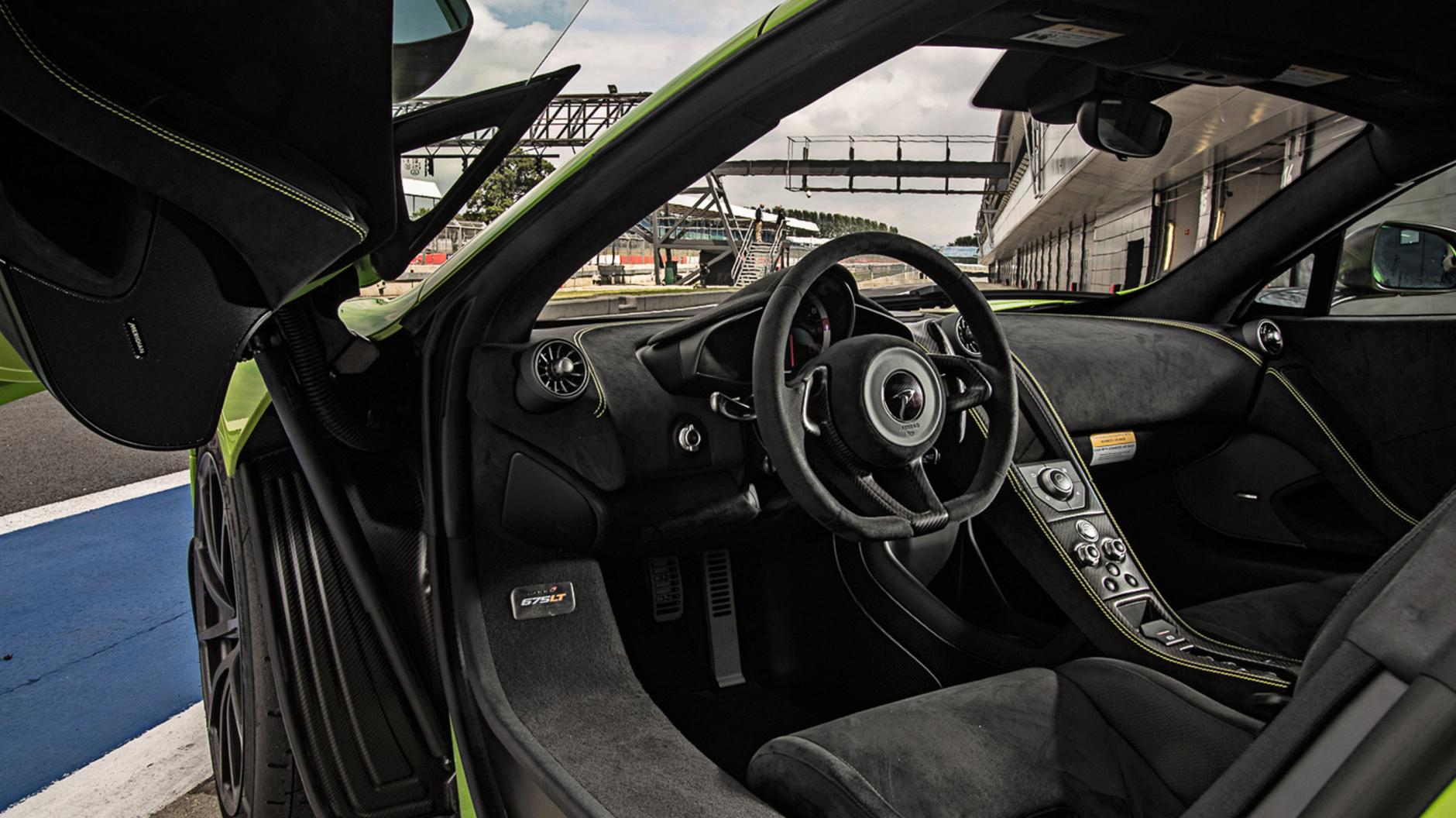 That's a mountain of money, but academic – all 500 675 LTs have been sold. McLaren reckons a fair percentage of these will see regular track use, in which case their owners will need to respect this car's remarkable potential.

Sport mode gives you more slip angles to play with, and the ESC can be completely switched off. At which point you'll discover that those slip angles are actually quite narrow, and you need to be on the ball.

The current supercar breed has so many algorithms so deeply integrated into the car's 'mainframe' that doing without them is an increasingly risky enterprise. Not to mention slower.

The original F1 didn't have any fancy electronics.
No, it didn't. In many ways, the 675 LT is channelling some of that car's singular character, raw edges included. The LT will mind its own business if you want it to, but knowing what it's capable is arguably the biggest buzz of all.