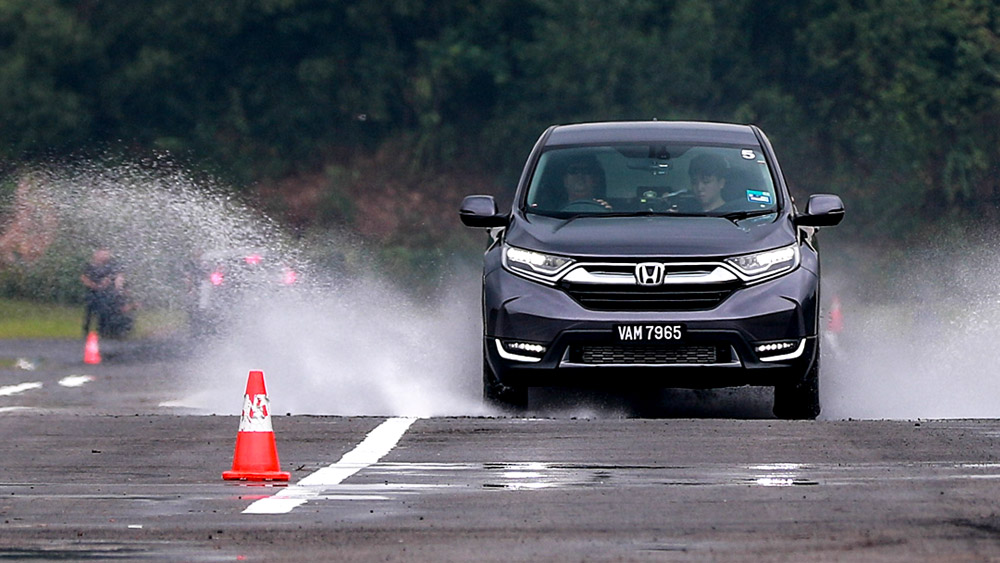 They’re at it again, aren’t they?
You bet. As we’ve said before, Honda Malaysia wastes no effort in ensuring they have a winning product in every segment they enter. This time round, it’s in the mid-sized crossover SUV segment where the new generation Honda CR-V turbo variants shine.

Introduced earlier this year, the new generation CR-V was built to be a game changer by packing a perky new turbocharged heart, a muscular new design plus a clutch of new and intelligent gizmos.

We’ve just driven the new range-topping CR-V 1.5 TC 4WD and 1.5 TC-P 2WD variants to Johor Bahru and back just this week. Suffice to say, there are several good reasons why this crossover is widely lauded as the segment’s new benchmark now.

What’s special about the new CR-V turbo?
Firstly, it has a new 1.5-litre VTEC Turbo four-cylinder petrol mill and 7-speed CVT automatic box motivating it. Both are lifted straight off the Civic, which in turn makes this new CR-V the first Japanese-made turbocharged petrol offering in this segment too.

This new powertrain powers three of the four available variants. Even when tasked at powering a bigger and heavier crossover SUV, the new VTEC Turbo + CVT package delivers plenty of performance and efficiency as how it did in the Civic.

Powertrain aside, Honda also brimmed the range-topping CR-V 1.5 TC-P 2WD variant with a bevy of electronic wizardries that were likely the result of the Honda Asimo android’s development.

Dubbed as the ‘Honda Sensing’ suite, the array of features here makes this CR-V sound like it could almost –ALMOST – drive itself. The suite is akin to what’s brimmed in the bigger and more expensive Volvo XC 90, employing an array of optical/camera- and radar-based sensors to work.

Just in case you were wondering, here’s a list of acronyms that the Honda Sensing suite is comprised of:

Do these actually work?
The first video below shows you how the LDW, LKAS and RDW systems help keep CR-V in lane.

Both LDW and RDW give visual and audible warnings, and it even vibrates the steering wheel too. When all these fails to garner a response, the LKAS will intervene by adding steering input and keeping the car on course.

This second video shows how the both the ACC and LSF systems work.

Working in tandem, ACC and LSF accelerates, coasts, brakes and stops all on its own without any driver input in the pedal. These systems were meant to make the Honda CR-V 1.5 TC-P 2WD a lot easier and less tiring and a lot safer to drive, proving itself tremendously during our drive to JB and back. 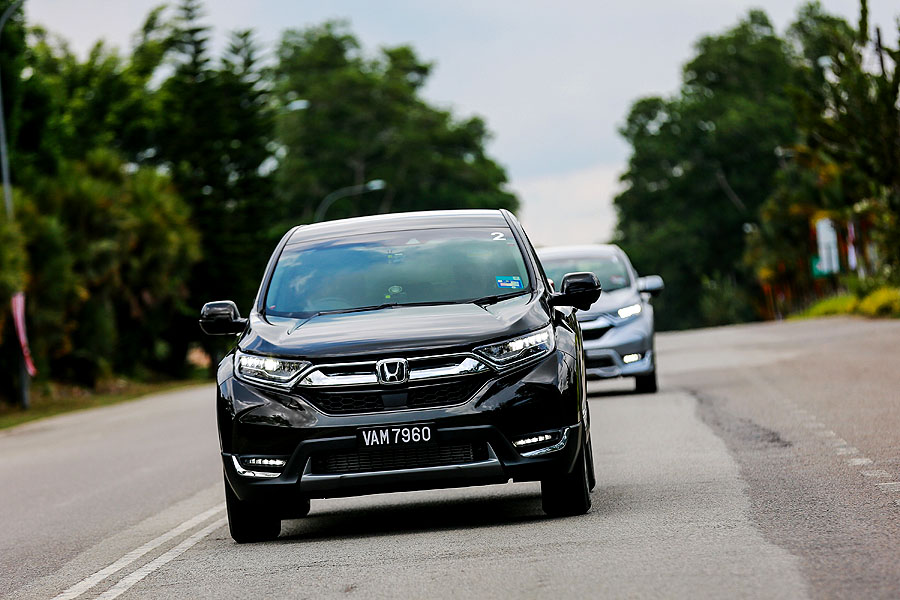 Is this new CR-V nice to drive?
Supplementing the intelligent electronics is the improved chassis engineering. The ride and damping felt much more supple for passengers whilst drivers will rejoice in how planted this new CR-V felt on the black top.

Muted electric power steering feel aside, there’s little to gripe with this crossover’s on-road manners. Additionally, the difference between the 2WD and AWD variants are mild, so you’re not missing much should you opt for the former.

On the noise, vibration and harshness (NVH) aspect, this new CR-V is also noticeable quieter than the last. Rear passengers will note that there is some slight tyre roar intrusion from the rear tyre well, but this isn’t a deal breaker. Overall though, things felt excellent for a crossover of this size and price. 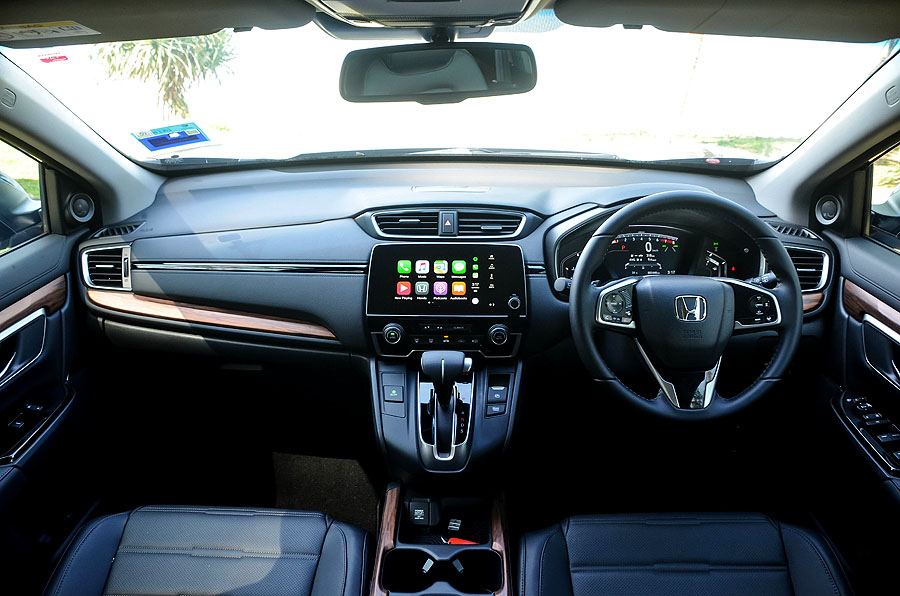 Is it well-equipped?
The short answer here is yes again, especially for the flagship CR-V 1.5 TC-P 2WD variant. This flagship offering is richly laden with notable features that make it a very useful and practical daily family runabout.

Sweetening things here is the increased cabin head- and legroom, especially for rear passengers. As always, cargo space is immense as before, especially when you fold down the rear seats as demonstrated in the video below.

Should I buy one?
For the discerning urban family, the new Honda CR-V turbo variants will make a lot of sense. Given just how feature-laden it is, the fact that is has a 5-star ASEAN NCAP crash-test rating, and the way it drives, any soccer mom (or dad) will want one indeed.

We’ll agree that the range-topping Honda CR-V 1.5 TC-P 2WD has a steep asking price of RM167,700 excluding insurance and registration. But just remember, there isn’t another crossover SUV at this price bracket that’s as well-endowed. 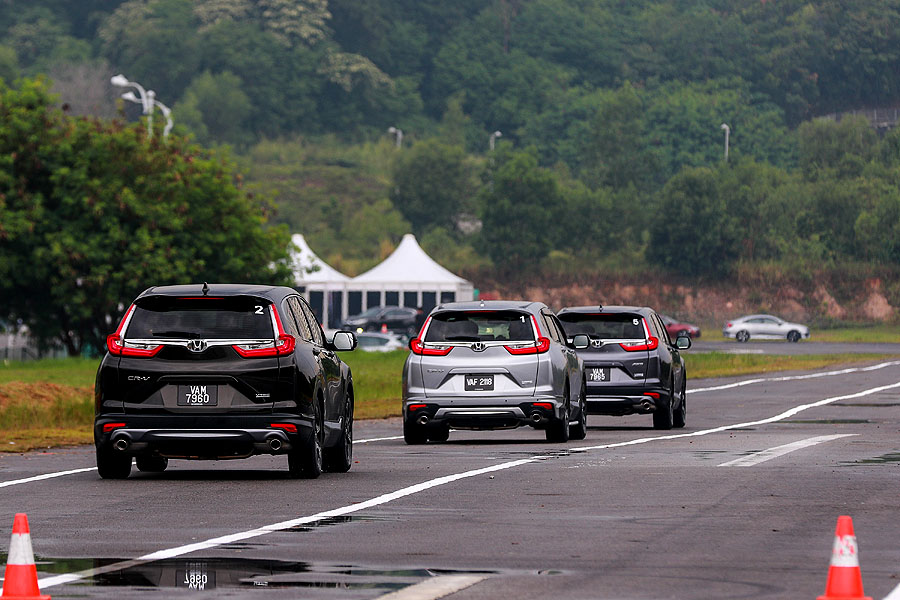