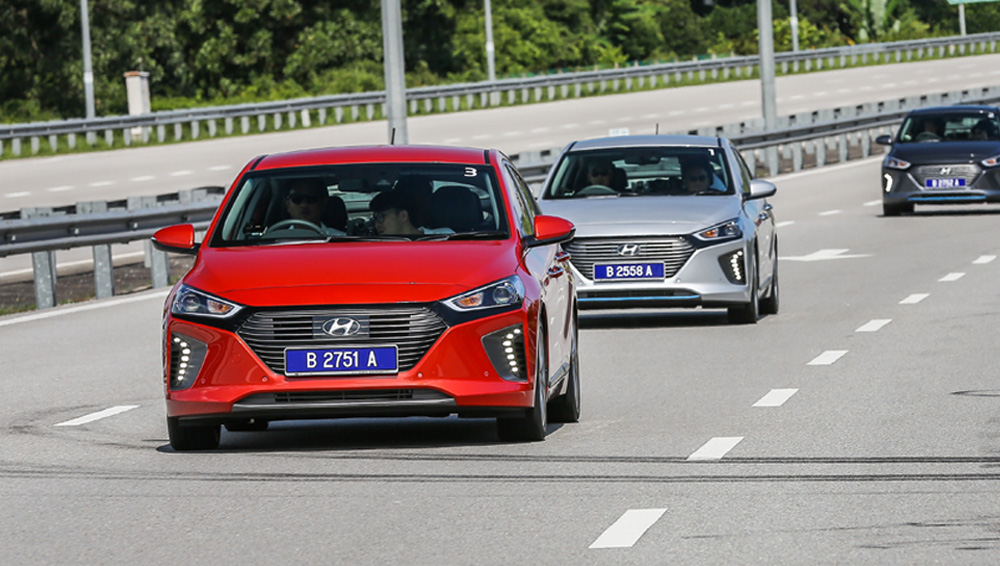 I’ve always been of the opinion that the automotive industry uses the word ‘hybrid’ as a marketing tool. It’s a bit like those dodgy fuel-saving devices you see advertised almost everywhere: they use something that everyone hates (read: expensive fuel prices) and try to convince people that they offer a solution. Oldest trick in the book.

Unlike fuel saving devices, however, the hybrid in cars actually work. Confusingly, I’ll also have to qualify that by saying some work much better than others. From my experience, the top of the pile is Toyota’s tech – it does what it says on the tin and does it noticeably. 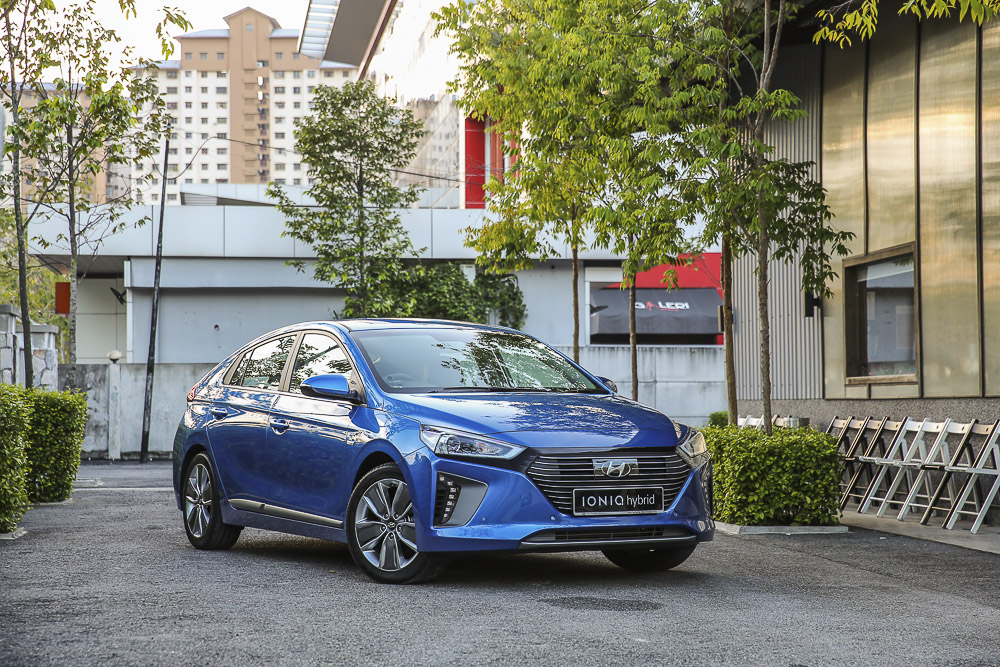 So Hyundai-Sime Darby Motors (HSDM) will have to excuse my cynicism about its claim of efficient mobility. Having said that, let’s give HSDM a standing ovation simply on all the gear and the pricing that come with its Hyundai Ioniq Hybrid.

Our car during the media drive had everything but the kitchen sink. Seven airbags, adaptive cruise control (Hyundai calls it Smart Cruise Control or SCC), Blind Spot Detection, Autonomous Emergency Braking and Lane Keeping Assist are all standard in this HEV Plus variant. For just over RM114,000, that’s quite a deal. Did I mention there’s Tyre Pressure Monitoring System and wireless handphone charging as well? 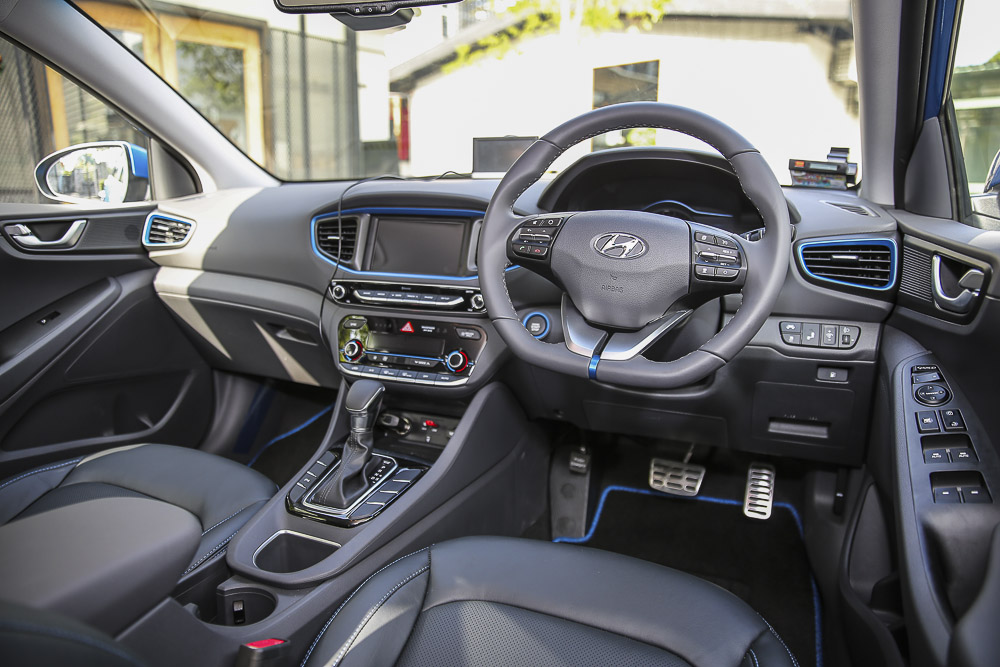 All this is unheard of in this segment. Let’s not forget that even without all this tech, the Ioniq is peerless. The once-thriving pool of hybrid models in Malaysia dwindled once the 2014 NAP was implemented (beginning 2016), surrendering non-CKD models to excise duty; more so for those circa RM100,000 or lower.

Never mind. I’m here to see how well the hybrid works. So I find myself in an Ioniq Hybrid HEV Plus and, at this point, the cabin already looks impressive. It’s far from sombre with the generous use of grey and pops of blue for contrast. Material quality is sensible at this price range and very generous.

A glance at the meter panel shows the car has a full tank, good for an expected travel distance of 881km. Scepticism drops, positivity builds. 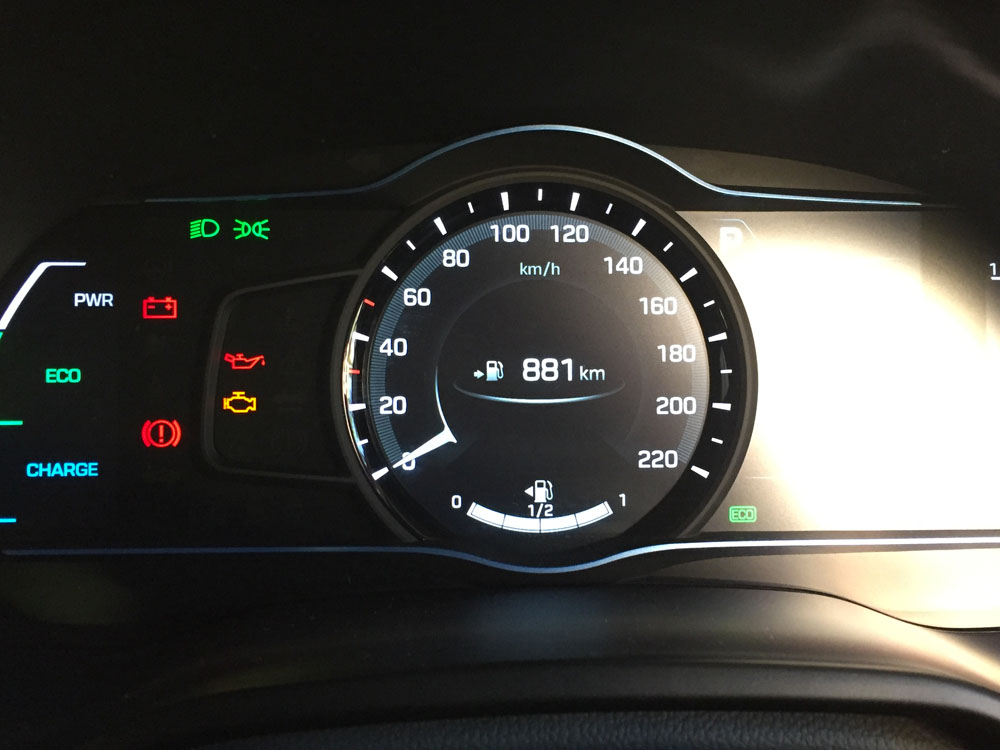 Out on the road, the Hyundai Ioniq behaves impressively. On lightly trafficked city roads the comfort level is high, with noticeably sharp throttle response from the 1.6-litre/electric motor combo. Truth is, you don’t really get the typical feel of how a hybrid usually behaves. The best evidence of this is from its brakes. Unlike other regenerative systems, this one has more feel, not unlike regular stoppers.

Looking at other Ioniqs in the convoy, I must say it looks very nice. The rear, viewed straight on or at an angle, is its best pose. The wedge shape is typical hybrid, best for aero efficiency we’re told. The front is rather bland even if dominated by that large front grille. The logo there is actually printed on a piece of plastic, thus quite horrible to be honest. However, this is done for a reason – behind this plate is a sensor for the car’s array of tech. 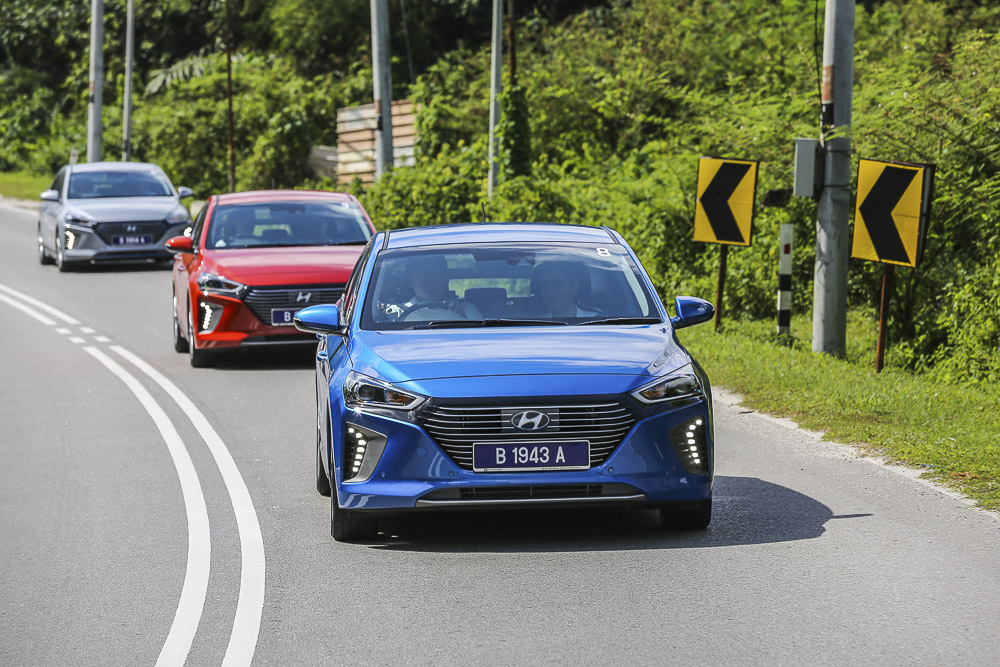 Mind you, this was essentially a half day drive, plus I had to excuse myself earlier thanks to another appointment. As such, not all of the features were tested. Case in point: the SCC/adaptive cruise control. This is where the sensor mentioned above would contribute, i.e. user sets the cruising speed but when another vehicle is detected up front, brakes are applied to maintain a certain distance to it.

Basically, we couldn’t make it work. Was it faulty? Probably not, a lesson quickly learnt after finally managing to get the Lane Keeping Assist (LKA) function to work. There are similarities between LKA and adaptive cruise control, both employ active means to keep the driver safe. The former takes control of the steering wheel with small corrections once detecting that the car is wandering into another lane. 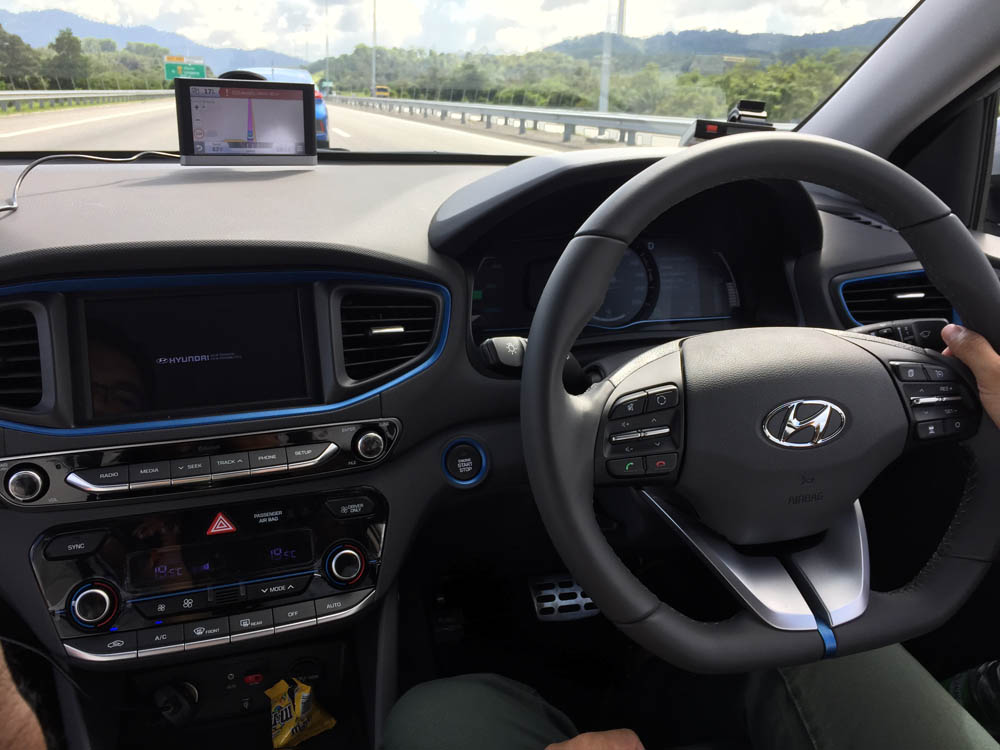 In the short amount of time with the car, the Hyundai Ioniq does not disappoint. High speed driving is certainly not what the hybrid is designed for but it will do it anyway as we found out when the speedometer reached 170kph with very little trouble.

Still, the main question needs to be answered - is the 881km projection for a tankful of fuel achievable. We can’t wait to find out. And you’ll be the first to know.