Shotgun in the Alpine A110 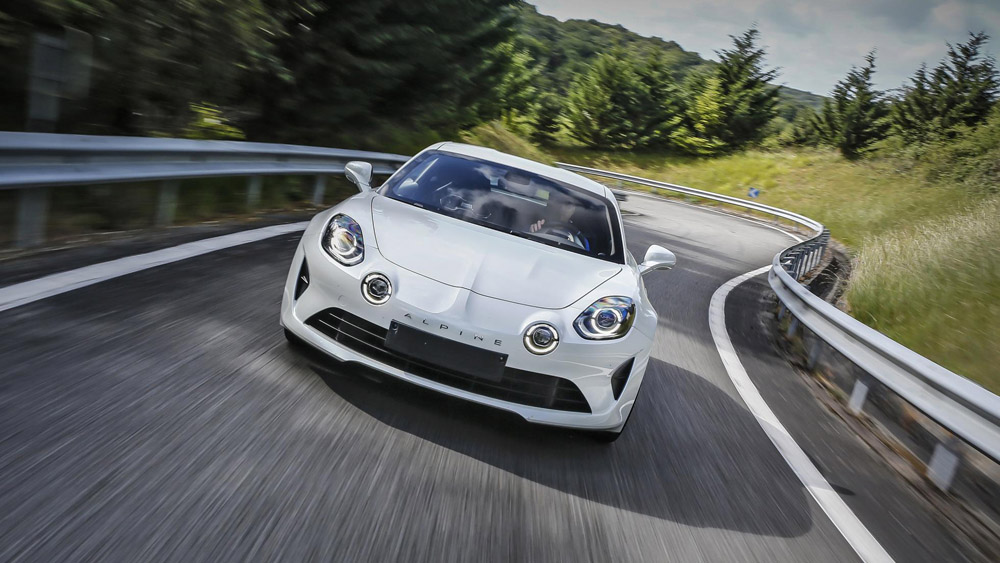 Laurent Hurgon is one of RenaultSport’s test pilotes, and no doubt he could drive the high-speed handling track at the company’s vast Aubevoye facility backwards with his eyes closed while singing La Marseillaise.

But even so, this is something else. Politely, he asks if I’m OK going quickly as we set off. Yep. “And a dreeft?” Yes, dreeft away. We want to see what the Alpine A110 is made of.

What follows is illuminating. First, this particular track is brilliant, and throws all sorts of nasties at a car. Second, like all world-class drivers, Laurent conjures magic out of the machine with magnificent economy of motion. It’s like that bit at the end of The Matrix where Neo beats the bad guy in slo-mo. Third, as far as I can tell from the passenger seat, the Alpine A110 has all the makings of a TG hero. 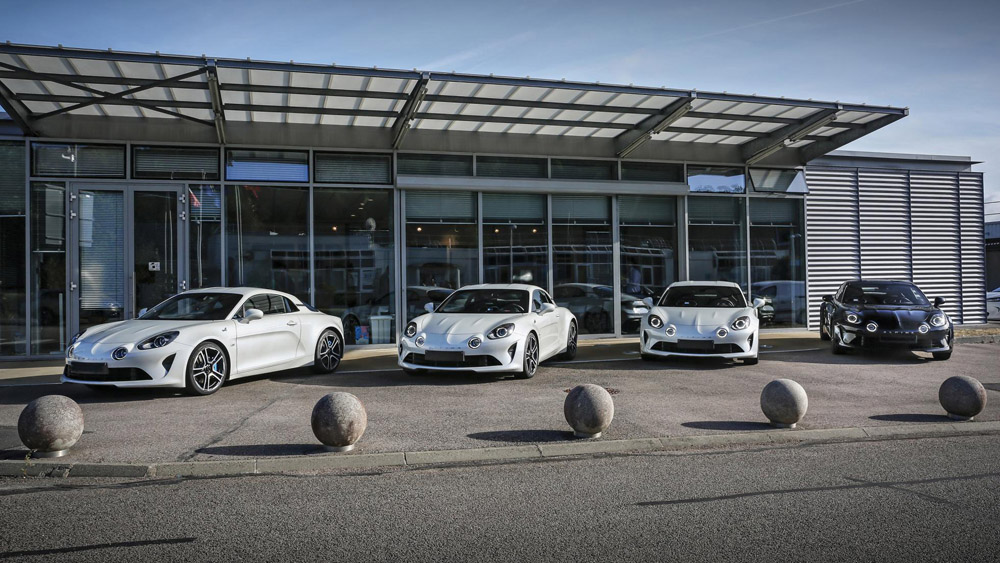 Following two decades in cryogenic suspension, Alpine’s re-emergence should be balm for our blighted times. The real thing is to all intents and purposes identical to the concept that trailed it, a neatly sculpted evocation of the Sixties A110 that inspires desire whether you know the original or not. 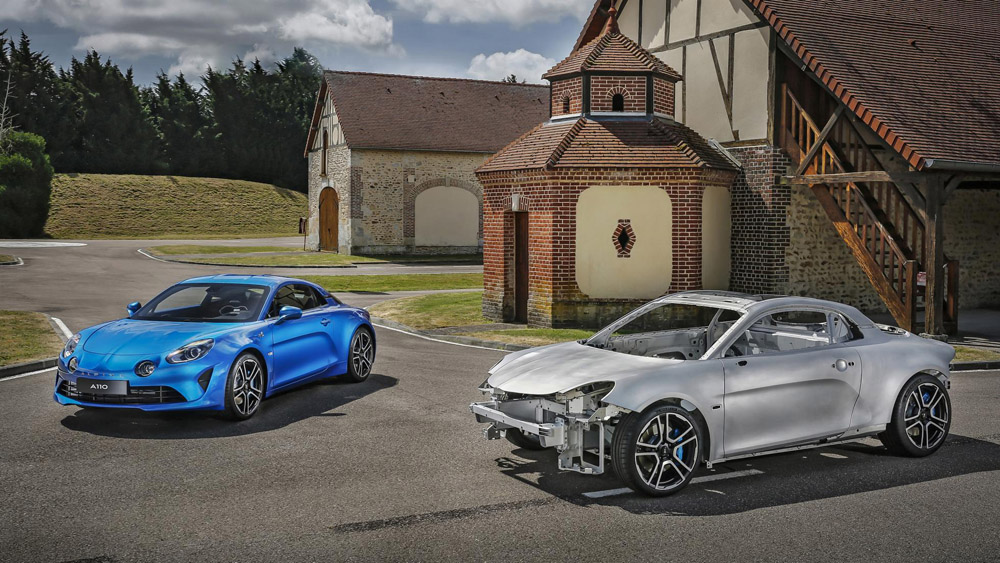 “Alpine is probably best known for its rallying exploits, and then Le Mans,” lead designer Antony Villain told me a while back. “I have a clear image in my mind of a really light, agile car drifting in the Monte Carlo rally.”

Ah yes, light. This is key. The Alpine will do battle with the Alfa Romeo 4C, the Audi TT RS, whatever iteration of Lotus Exige or Evora is around in 2018, and the Porsche Cayman. Formidable competition (although the 4C proves it is still possible to snatch defeat from the jaws of victory).

All involved know they’ve got a mountain to climb, and credibility to build, although starting from a clean sheet theoretically reduces the compromises. But it also piles on the pressure. Remember this, though: the Alpine’s kerbweight is 1,080kg, it’s only just 4m long, and it has a power-to-weight ratio of 232bhp per tonne. 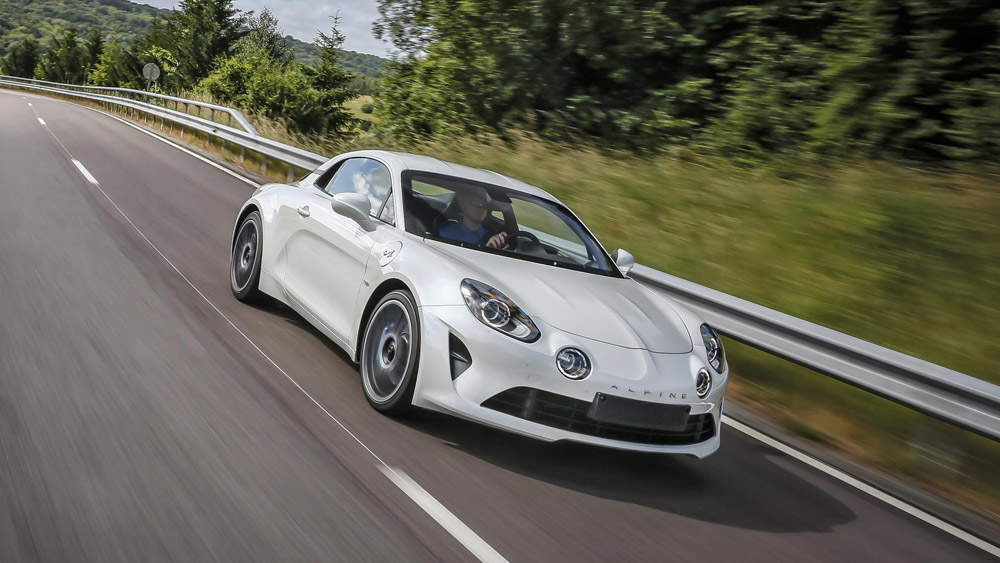 The numbers are underpinned by an all-new aluminium chassis, and the heaviest bits – engine, fuel tank and passengers – are all located centrally for a low polar moment of inertia (the fuel tank, unusually, is up front.)

“Mass management,” chief engineer David Twohig says emphatically, his Irish accent tempered by 20 years in France. “From day one, we thought we’ve got to make a breakthrough on this. Four of us could easily lift this chassis.”

The suspension uses double wishbones at either end, and Twohig and his team are rightly proud of the kinematics they’ve delivered, and the way they’ve circumvented the packaging problems this layout can create. The bigger picture game-plan was to deliver something the trackday warrior would savour without spooking the less experienced on a spike of snap oversteer. 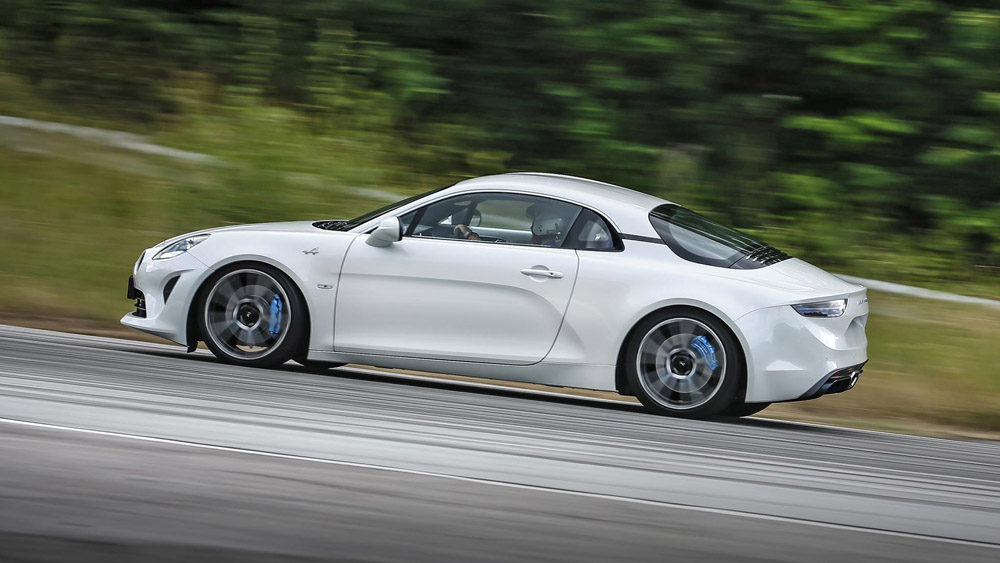 “With a blank sheet we could place the hard points where we wanted,” Twohig continues. “The setup we have here is rare on a car at this level, but it gives us tremendous linearity in the camber angle, and means that the tyres’ contact patch on the road is perfect. Because you don’t have to fight the roll, you don’t have to fit stiff springs. At no point in the suspension stroke does the camber angle suddenly do something bizarre. In layman’s terms, it’s predictable, progressive, friendly…” 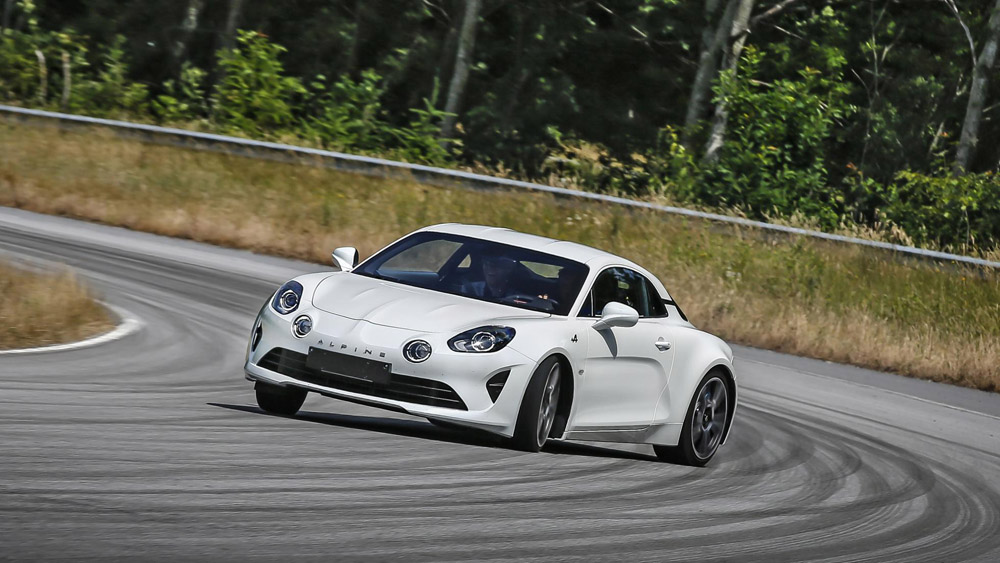 Aubevoye is 97 kilometres north of Paris, and features 58km of test track split into 32 separate configurations. There are also anechoic chambers, salt baths, and temperature torture chambers. French being an inherently romantic language, the tracks rejoice in names like ‘synthèse confort’, ‘voie rapide’, and ‘piste d’excitations’. There’s also a ‘montagne’ section, which is where I have my first taste of Alpine’s shrunken supercar.

The passenger ride is a staple of the pre-launch pre-load on a new car, and TG usually doesn’t bother unless we really think it’s worth it. Like right now. If you’re looking for a quirky automotive outlier, you could do worse than Alpine. The A110 is the, er, A110 reimagined, but newbies should check out the wedgy ultra-Seventies A310 and later A610, too. 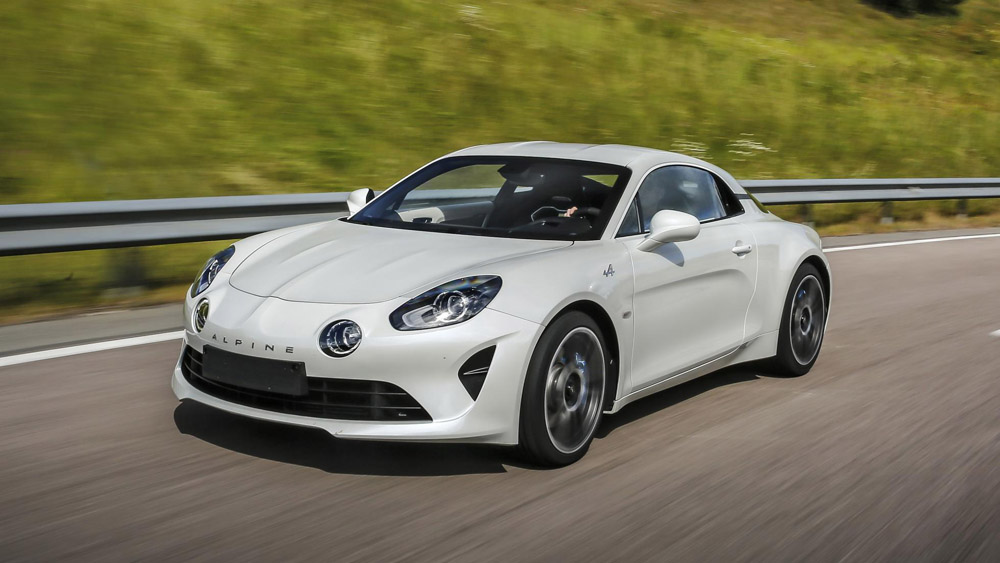 From some angles this new car can look a bit dainty and toy-like, but mostly it’s fresh and fun. Among other things, it has to feel substantial while not actually being that substantial. A big ask. The doors are light, but the apertures are the biggest in this segment, so no yogic gymnastics are required to get in or out.

The cabin architecture is simple but elegant. A small central screen handles infotainment, a central spar – not dissimilar to the sort used by Ferrari in the 488 – houses the powertrain mode and start/stop button. There’s harder plastic in the door trims, but the bits your eyes settle on or your hands interact with are all of perfectly decent quality. And the seats, designed and made by Italian specialist Sabelt, are fantastic. They weigh 13.1kg each, half the weight of the racy chairs in the Megane RS.

The Alpine wears Michelin Pilot Sport 4s, specially tuned for this car. The fronts are 205s, the rears just 235s, another indication of where the car’s priorities lie. Weight-saving leads to a dynamic virtuous circle, and the way the A110 turns in and changes direction is very Lotusy. Frankly, it feels fantastic. It uses electric power steering, the feel of which we can’t confirm for a few months yet. But at just two turns lock-to-lock it’s certainly fast, and Twohig reckons whatever trade-off may exist is worth it when the resulting efficiencies help reduce CO2 emissions to 140g/km. More real-world considerations. 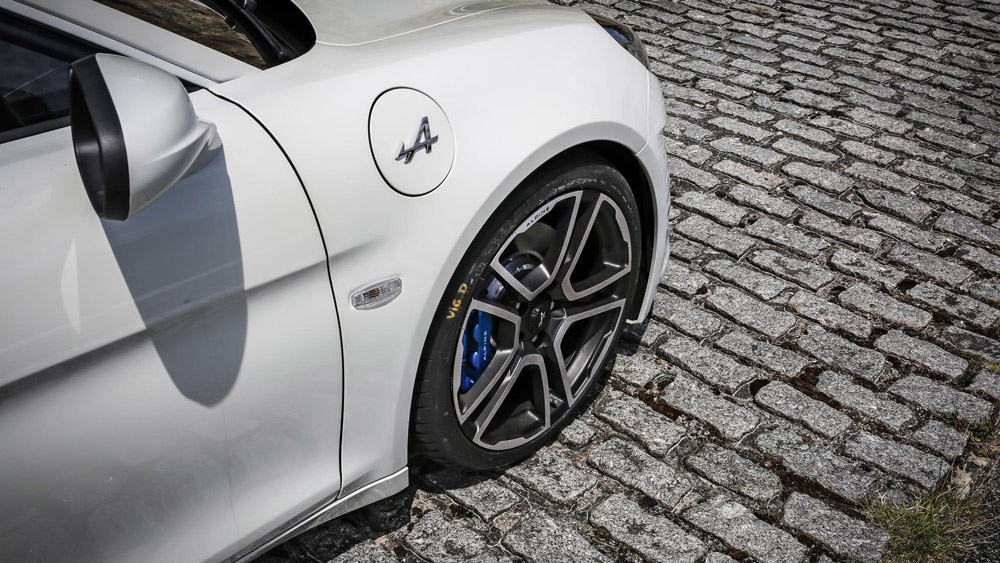 Happily, we can lay two other concerns to rest: the 1.8-litre four-pot (249bhp, 320Nm) sounds angry under load but shuts up at motorway speeds, and the seven-speed DCT shift times seem plenty fast without robbing the process of all feel. I ask Philippe Mérimée, RenaultSport’s chassis development boss, to throttle off deliberately mid-corner when we’re fully committed, and the Alpine just shrugs off the idiocy.

It also rides astonishingly well over the ‘synthèse confort’ section’s brutal surface changes and evil yomps. Again, very Lotusy, in terms of its amplitude and ability to ‘breathe’ on its springs and dampers. Despite its shape, and the absence of a rear spoiler, clever aero underbody work ensures that its high-speed stability is also exceptional.

And it’s fast, too. Of course it is. If anything, it feels faster than its 0–100kph time of 4.5 seconds suggests. Is there more to come? “I work with a bunch of engineers who are total petrolheads. They spend every waking hour thinking of two things: how to get more power out of it, and how to reduce the weight. Even if I wanted to, I couldn’t stop them. I’m saying no more…” 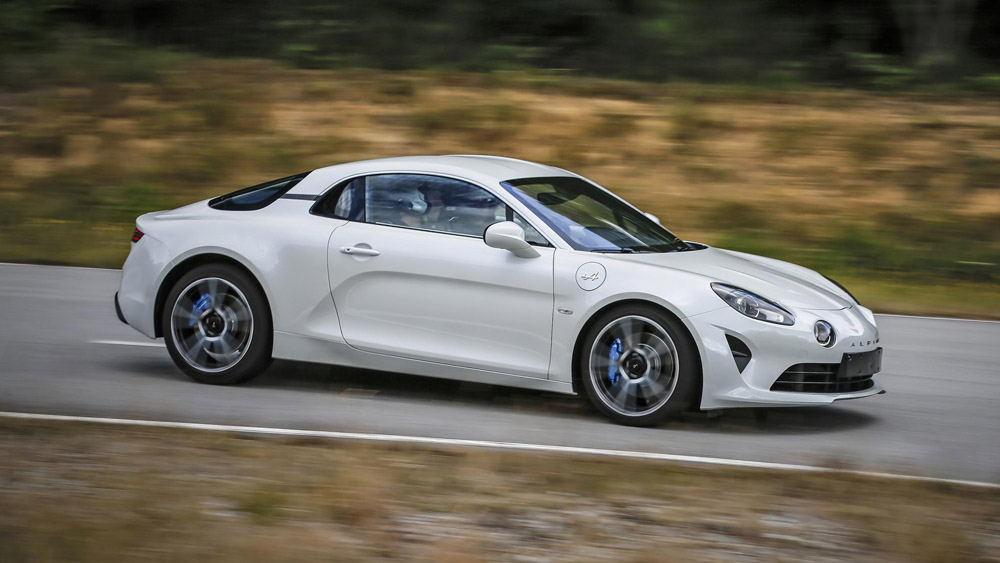 Just don’t ask about a lap time around a certain German circuit. “It’s not a power car, it’s never going to have 500bhp, so you have to stay disciplined on the mass. You can’t eat that Kit Kat. It’s all about the balance,” Twohig insists.