The B-Class has long been the unsung hero of Mercedes-Benz’s compact car catalogue. Tubbier than its peers, and perhaps unattractively so, the big hatch was never invited to the hip parties and concerts that the trimmer A-Class, CLA and even GLA were often associated with. But its continued existence in spite of a virtual dearth of superficial qualities tells us one thing: that the B-Class has a genuinely useful skillset for affluent buyers capable of overcoming the urge to purchase the prettiest set of wheels their RM250k budget would permit.

The pill goes down easier now, with the third-generation B-Class flaunting more cosmetic qualities than it has ever had before to complement improvements in the versatile package responsible for keeping the nameplate alive for the past 15 years. Now a wider car with a wheelbase that stretches 30mm further into what used to be unsightly, long overhangs, the W247 B-Class is noticeably squatter in a visually dynamic sense. It’s shorter and more aerodynamic than its predecessor too. And while boot space hasn’t tremendously improved, 705 litres (upgradable to 1,540 with the rear seats folded) is a huge number made more versatile by 40:20:40-split rear seats.

If these practical praises seem to make the B-Class sound like a glorified Honda Jazz, what with its cavernous, hatched physique and clever folding seats, it’s because it’s somewhat true. The touch of discrepancy lies in the things that differentiate a Merc from a Honda in the first place; things like an ultra-refined interior with Artico leather seats, open pore linden wood trim, 64-colour ambient lighting, and a dashboard made almost entirely out of high-definition colour screens just like the A-Class, MBUX included. The latter now packs better AI, with the recently-launched Mercedes me connect unlocking features like global search and Linguatronic online voice control for richer multimedia and navigation possibilities.

In Malaysia, Merc’s upmarket solution to furniture-shopping that isn’t a pickup truck or a minivan can only be had in B200 Progressive Line format, for now at least. It’s not what fans of AMG-branded wheels and door sills who can’t afford the real deal want to hear. But in a car that’s never going to taunt a Golf GTI at the lights, the B200’s smooth bumpers and inoffensive 18-inch alloys certainly look the part. It’s a genuinely impressive package inside and out – you’ll be hard-pressed to find a similarly-sized hatch with this level of sophistication. We just wish there was a bit more athleticism to go with the B’s aestheticism.

Under the smooth clamshell hood of the B200 is the German carmaker’s 1.3-litre four-pot turbo, which made its first appearance in the W177 A200, good for 163bhp and 350Nm of torque. It injects the B-Class with a healthy dose of low-end pep, with performance figures of 8.2 seconds and 223kph all part of the deal. But the down-sized four-banger is a touch more uncouth than your typical Mercedes engine when given the whip; it does what you ask of it, but not without channelling its frustration via the occasional medley of mechanical acoustics.

On a brighter note, the seven-speed Getrag dual-clutch gearbox is incredibly slick. The communication of power between the M282 engine and front wheels is quick and seamless, though it’s probably helped by the fact that there’s not that much to manage in the first place. Paired to the W247’s longer wheelbase, lower centre of gravity and improved aerodynamics – its drag coefficient is a slippery 0.24Cd – the end result is a car that’s much more engaging to drive than it looks, if you can look past the engine’s lack of polish and SUV-like driving position. The comfort-biased suspension adds to the pleasantries, especially when occupancy is maxed out.

If we have to nitpick, the doors on the B200 didn’t shut very easily on our test unit and its multitude of proximity sensors can get quite hypersensitive when braving the Federal Highway at rush hour. In the Merc’s defence, the parameters for features such as Parktronic and blind spot assist are customisable and flexibly so. Whether these features are actually useful to you is immaterial; this is a car that doesn’t leave you wanting on the technology front despite packing one of the smallest price tags listed on a brand new import in a local Mercedes-Benz dealership.

For all of the digital keywords attached to the latest iteration of the B-Class, we sense a strong, rustic likeability radiating through every pore of its practicality-biased makeup. The B200 proves that there’s more to a car’s charisma than svelte lines and high-speed antics. It shows you that old-school versatility and modern creature comforts can coexist in a package that’s not an SUV. Above it all, the B-Class keeps things real. And that’s not something we say very often about a car brandishing the three-pointed star 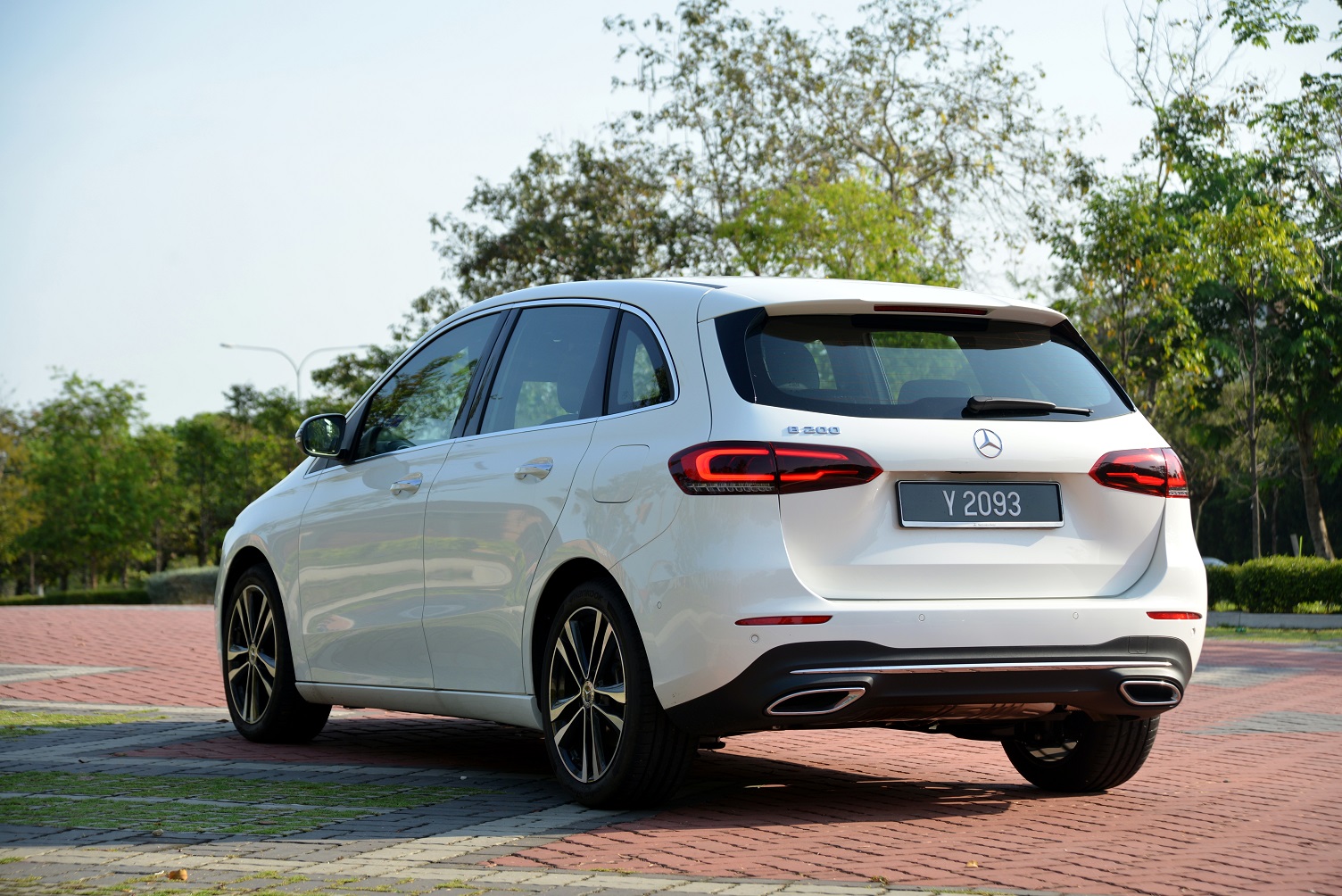 A charismatic package of tech, space and versatility presented in more fluid aesthetics gives the B-Class an identity of its own; it's no longer just an XL-sized A-Class. However, the 1.3-litre engine can get uncharacteristically rough by Merc's standards under heavier loads.

In Progressive Line format, the B200 casually proves that you don't need an overpowered/oversized SUV for practical motoring with a dash of luxury. 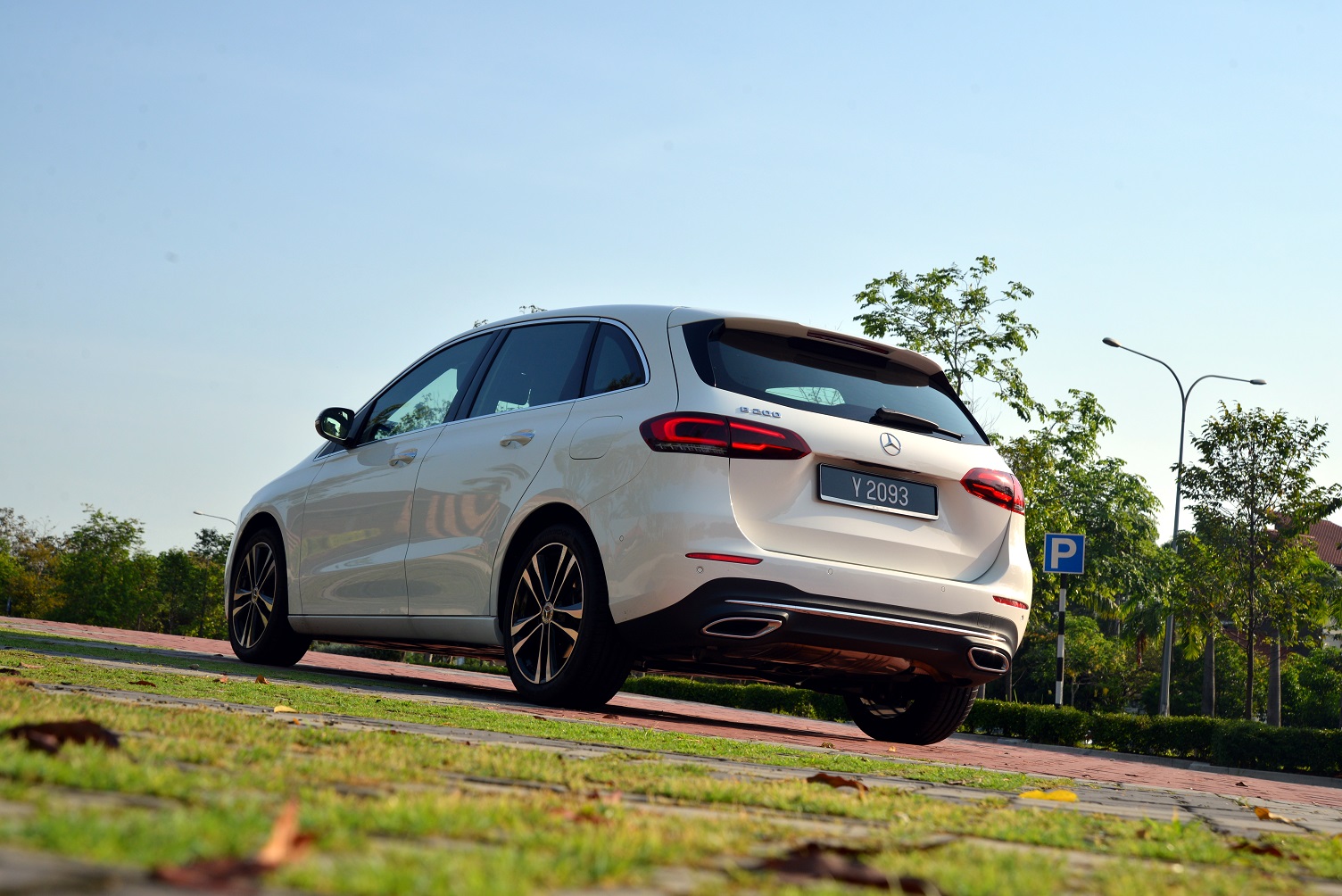 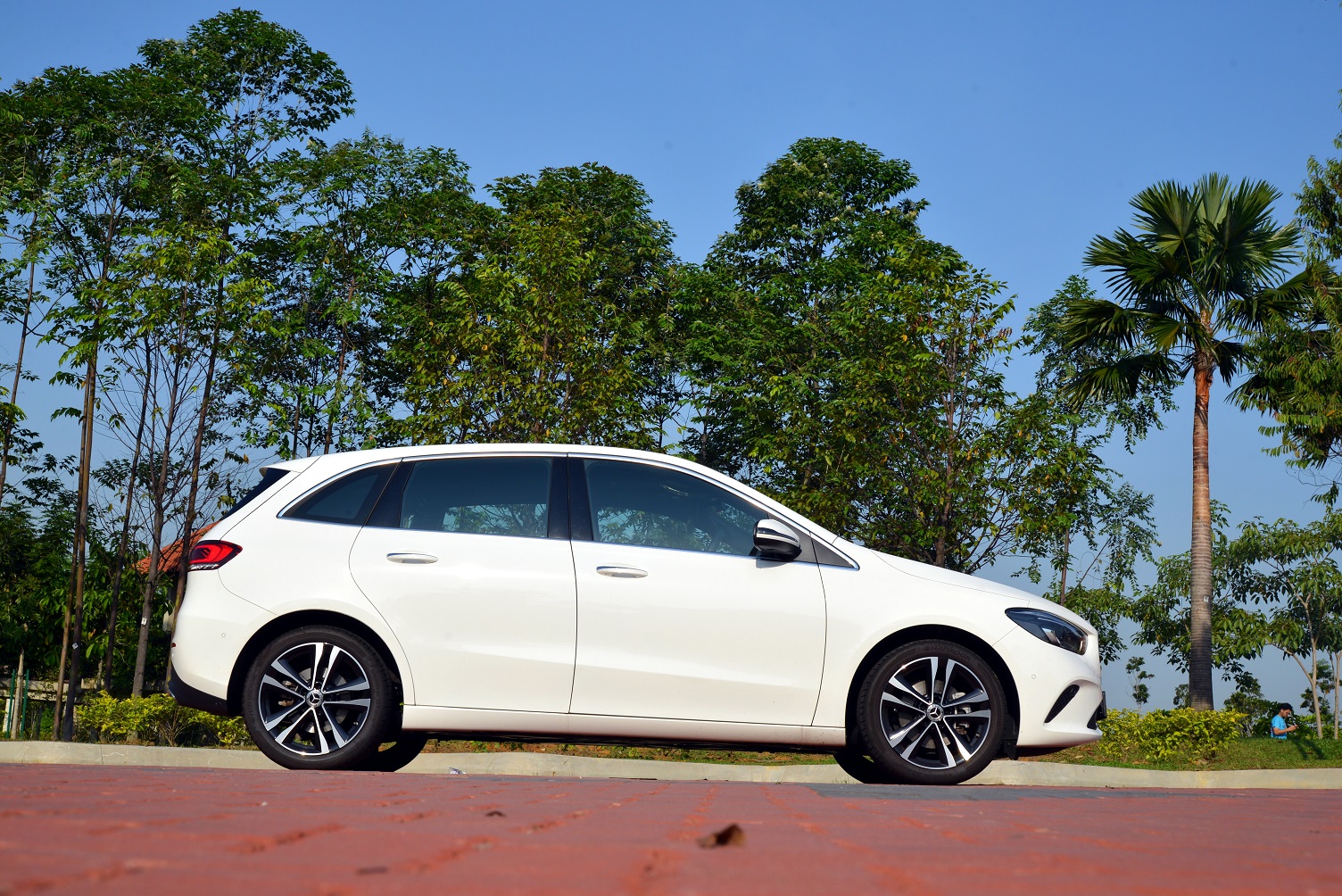 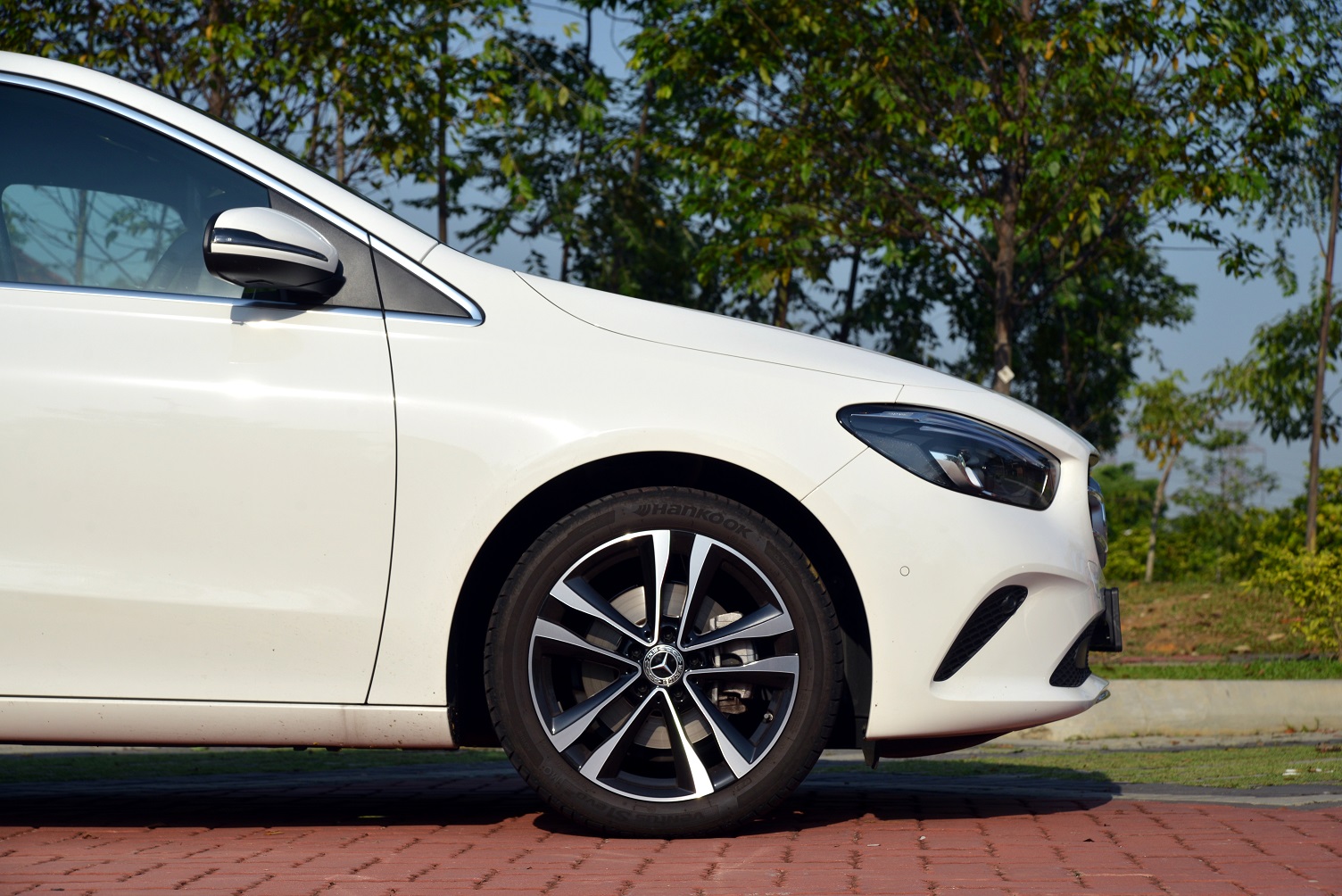 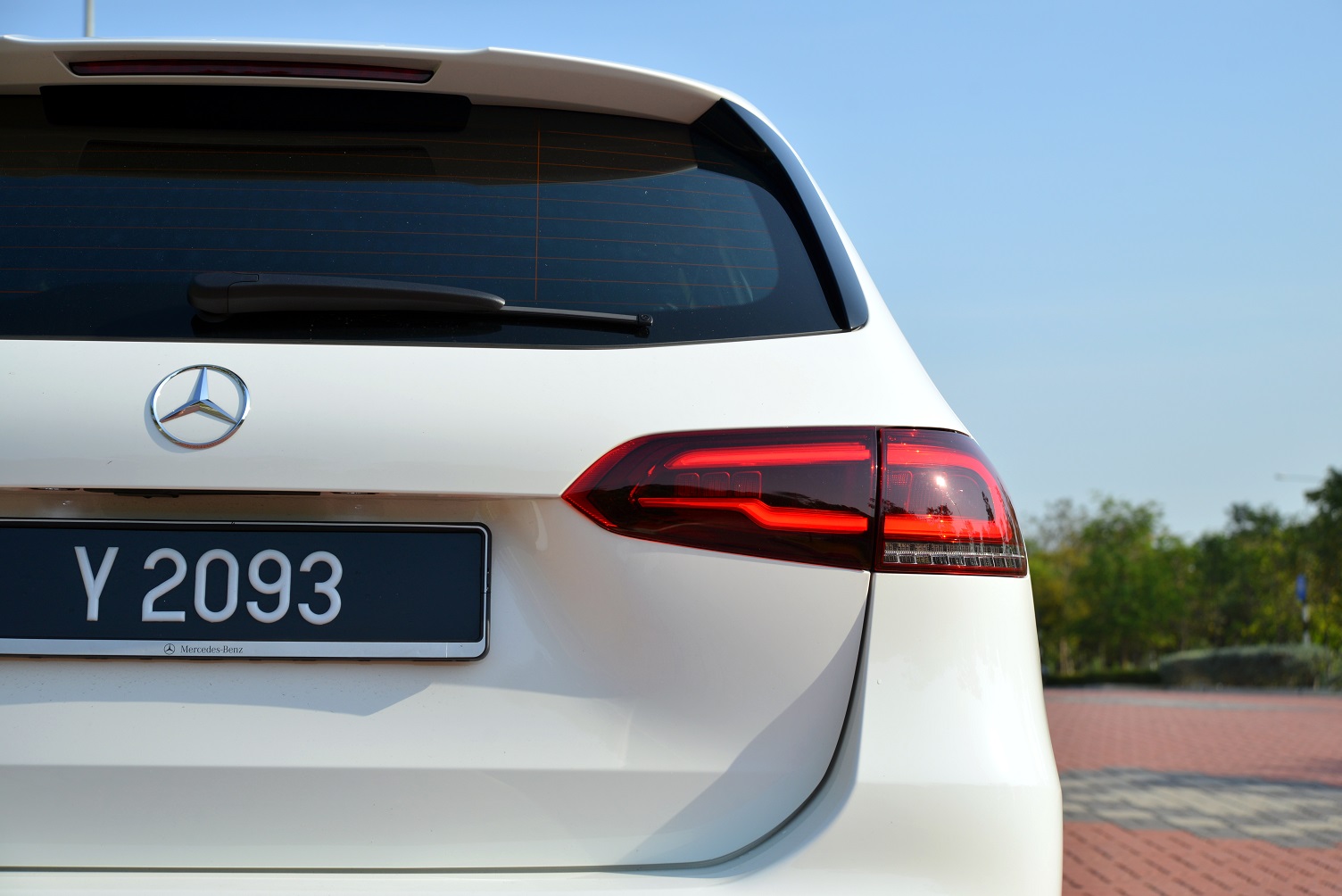 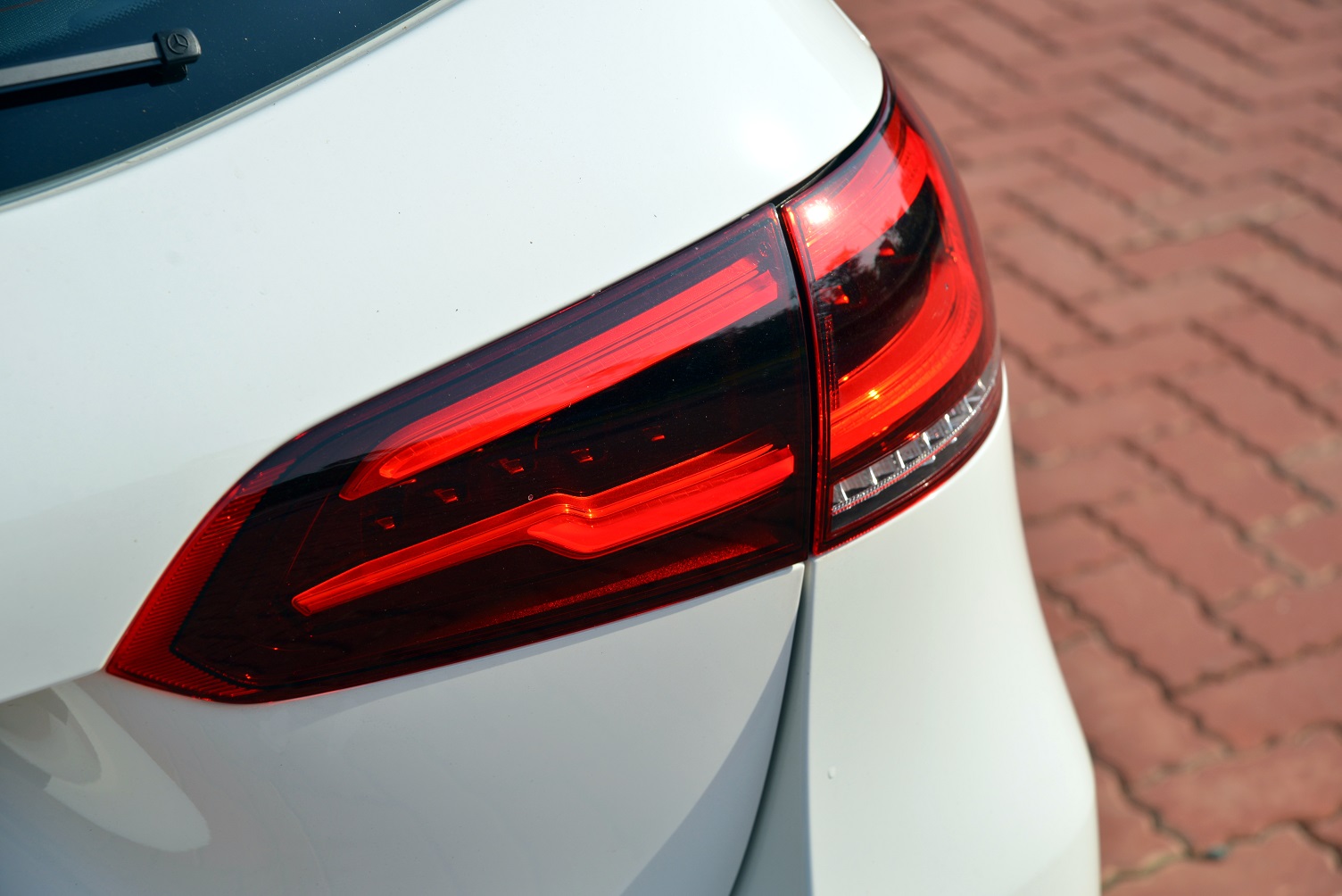 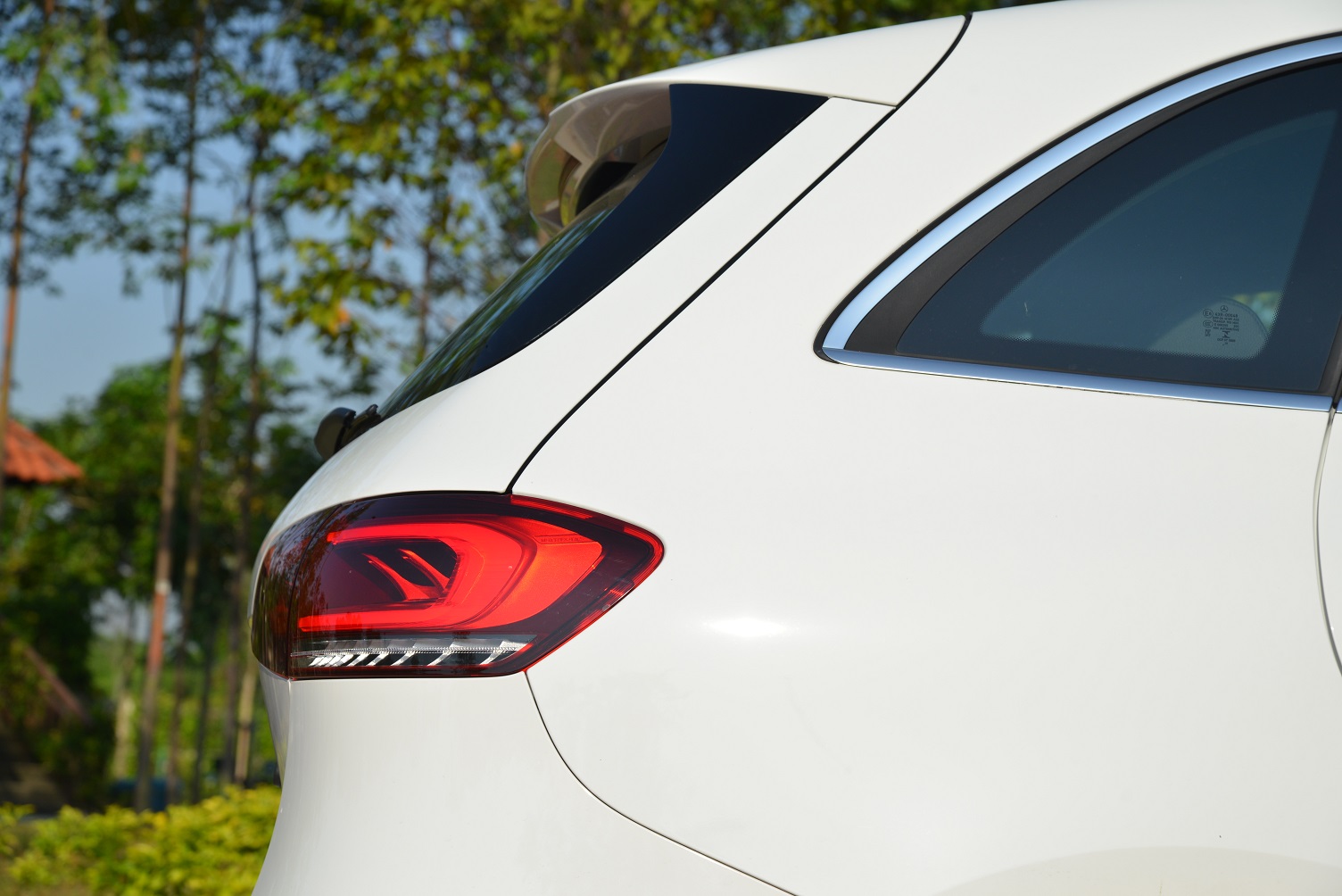 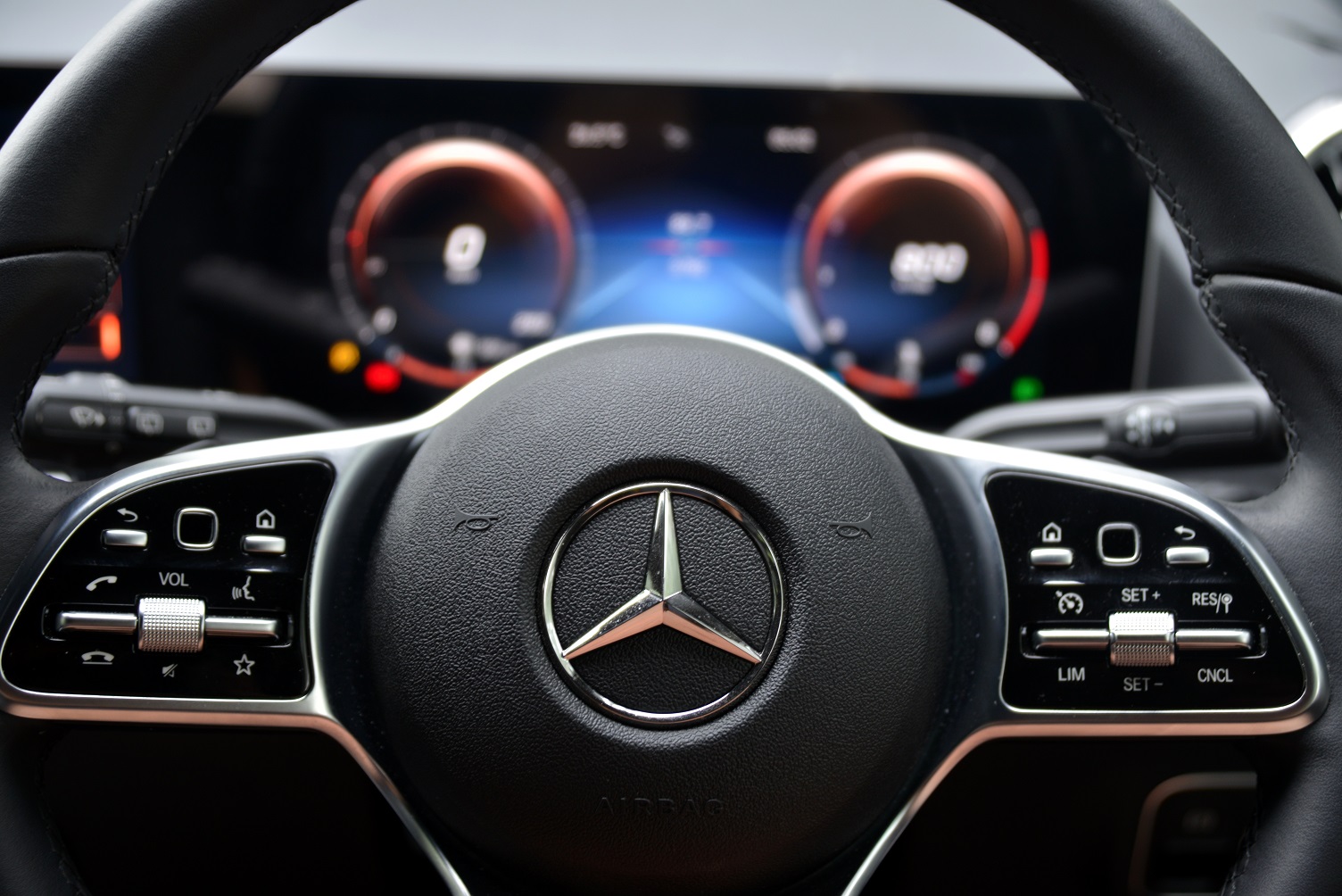 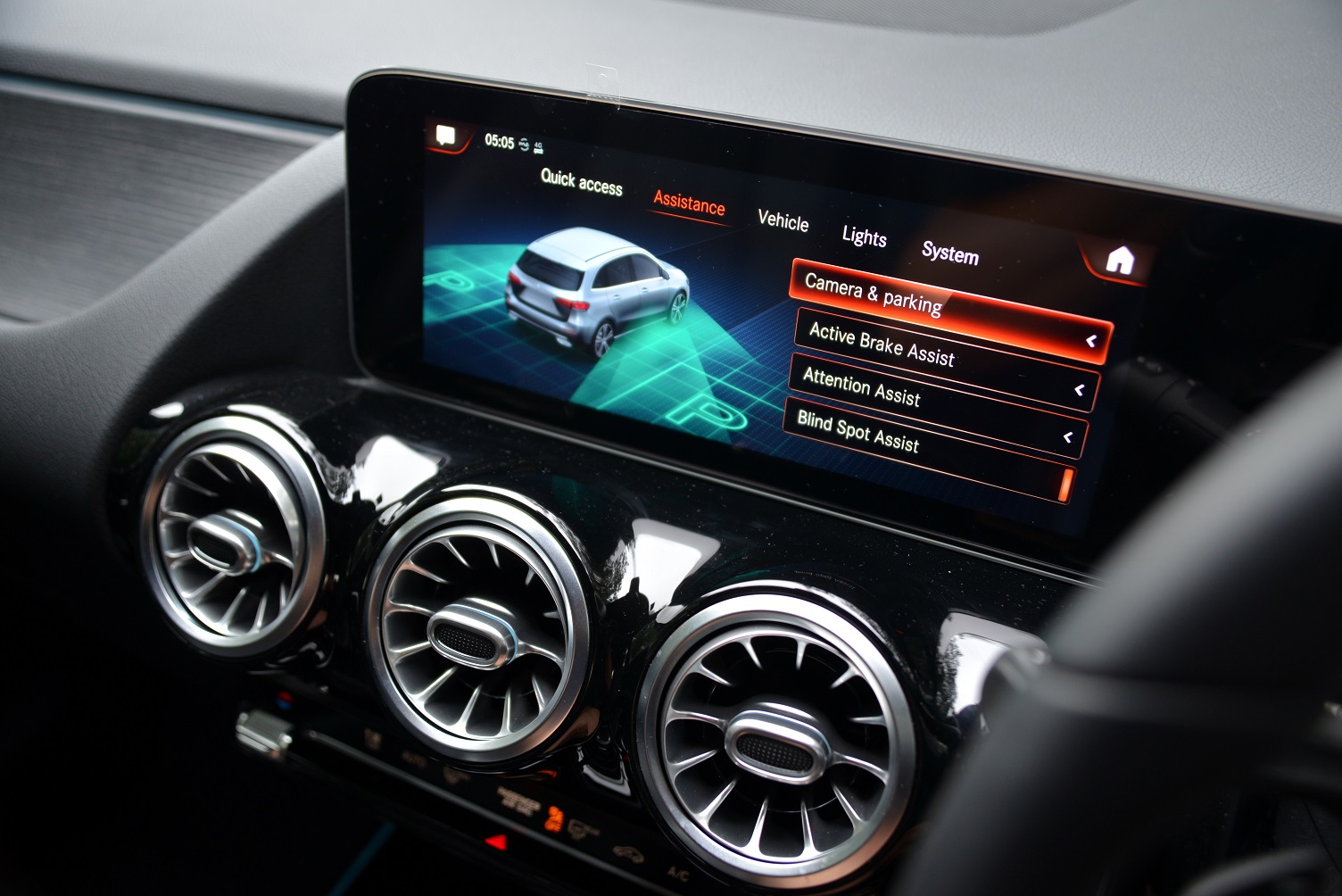 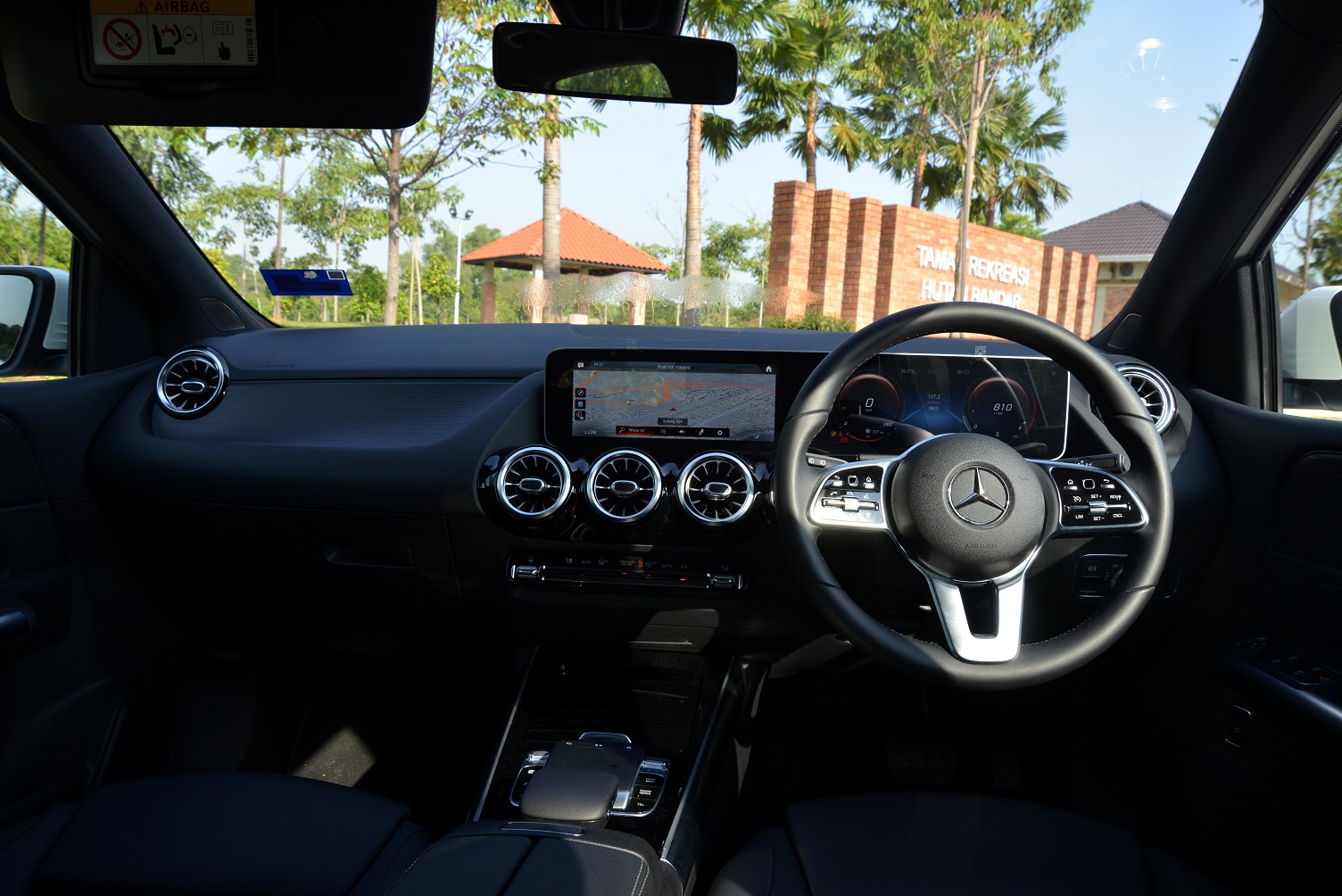