Overview
We have the Porsche Panamera to thank for the existence of the AMG GT 4dr. Despite a plethora of fast, expensive machinery at the top of the Mercedes range (E63S, S63 saloon and coupe, CLS53, AMG GT S etc), Mercedes was losing customers who were unable to upgrade to the car they really wanted. Which was, apparently, a very fast, coupe-ish, four-door, sports-focussed, very expensive family car. Niche, eh? You could argue that was the role performed by the old CLS63, but that was deemed too cheap, too GT-ish to tackle the Panamera.

So now we have a four-door AMG GT. Although underneath it actually has much more in common with the E63 and new CLS. Yep, the name is disingenuous, given that this new car uses the MRA platform that underpins the C-Class, E-Class, CLS and various other Mercedes’, and therefore isn’t a four-door version of the GT at all. But it has been modified, gaining extra strengthening for the body.

Up steps the 4.0-litre twin turbo V8, available, like the E63, in S (631bhp) or non-S (577bhp) outputs. The fourteen grand price difference between the two (£121k plays £135k) is also accounted for by the S having dynamic engine mounts, an electric locking rear diff, and the ability to disconnect the front driveshafts and indulge yourself in Drift Mode. In Europe there are also GT 53 and 43 versions, which use the new 3.0-litre in-line six-cylinder in 423 or 357bhp forms. 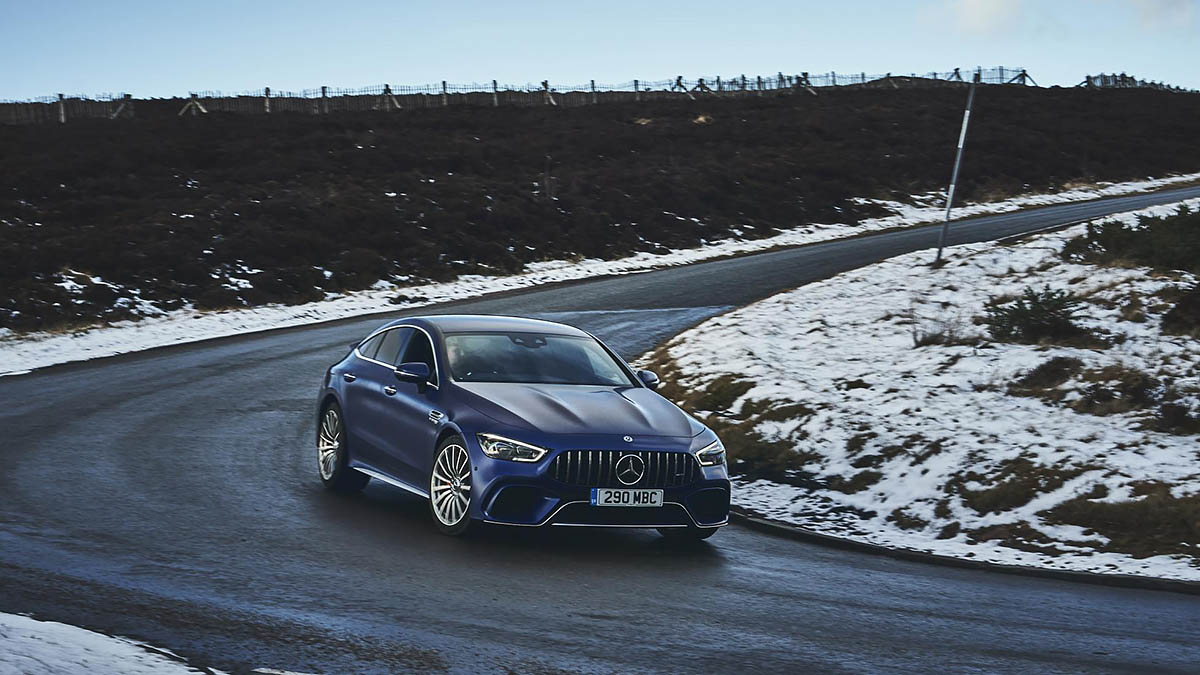 In due course there will be a hybrid. Or maybe two. Mercedes mentions the fact that 40 per cent of Panameras are hybrids, e-power available in conjunction with both V6 and V8 motors. Stands to reason Merc might want a slice of the same action, so a 631bhp-plus-e-boost could be on the cards.

Like the Panamera, it’s long (over five metres), heavy (2,100kg and upwards), and luxurious. The driving environment has overtones of both AMG GT and S-Class, four seats are standard, a fifth optional and there’s a big boot, the space smuggled in under a swooping, almost endlessly elongated coupe silhouette. It’s a handsome beast, with greater street presence than its key rival. It features active aero: a 20-fin Air Panel grille enlivens the front end, at the rear there’s a multi-stage rear spoiler that flips up to increase stability under braking.

What is it like on the road?
Let’s focus on the 63 S 4Matic+ to start with. It’s a magnificent powerplant, this 4.0-litre ‘hot inside V’ V8 bi-turbo, delivering 631bhp and 850Nm from 2,500 to 4,500rpm. If Ferrari’s 3.9-litre twin-turbo leads the way, this AMG unit is damn close in terms of zero-lag flexibility and charisma, its twin-scroll turbos and twin-duct exhaust manifold enhancing efficiency, low-rev torque and, perhaps most noticeably, engine response. Performance is blistering, 100kph blazing past in 3.2 seconds with a top speed of 315kph (the non-S is 0.2secs and 5kph slower), all over-laid by thunderous old-school sonics.

Given that this is AMG’s family supercar, duality and approachability are key, though. The 63 S is certainly easier to deal with than the GT coupe, swatting away surface noise and riding compliantly despite its hefty rubber (295/35s at the rear). It’s an able, amiable cruiser. The exhaust noise dies away, and although ‘Comfort’ is a relative term and there’s an underlying positivity to the ride, it’s at least as competent on long trips as the Panamera and more comfortable and quieter than an E63.

But AMG is also confident in the GT’s seamier side. The tech arsenal is deeply impressive: air suspension, adaptive damping, rear steering, dynamic engine mounts, and fully variable all-wheel-drive. The nine-speed dual shift gearbox uses a wet clutch to cut weight and improve response, and the shift times are finger-snap fast and crackle emotively. Steering, suspension, engine and transmission parameters are all governed by the Dynamic Select drive system, which spans six set-ups from Slippery through to Race.

Within that, there’s a further Dynamics Plus palette, encompassing Basic, Advanced, Pro, and Master. There’s also a Drift mode, if you have money and rubber to burn. Although this preponderance of software could risk overkill or mask some basic problems, the fact is the GT 4-door is an astonishingly agile machine around a track, stable on the brakes and into corners (390mm discs at the front, ceramics a £6,995 option), able to find incredible traction on the exits, happy to play fast and loose if you want it, but progressive on the limit. And, to paraphrase Frank Sinatra, if it can make it here, it’ll make it anywhere.

Like your average British B-road. The GT doesn’t feel as wide as the Porsche. It’s easy to place thanks to accurate, immediate, sharp steering – that’s one of the car’s dynamic highlights, crisper and more informative than you’ll find in any other super saloon, from BMW M5 to Audi RS6. And it manages to shrug off its weight, never feeling like the 2.1-tonne heavyweight it actually is. The centre of gravity is low, roll minimal, grip strong. It’s rewarding, engaging to drive – as much, if not more, pure fun to drive than the E63. Better body control than junior, thanks to extra body stiffening and altered suspension, too.

You notice the rear-wheel steering aiding turn-in, perhaps aiding a little too eagerly in Sport+ mode. It makes astonishingly rapid, composed progress. You can drive it smoothly, or indulge its inner hooligan, and it relishes both approaches equally. Non-S version? A little less punchy at the top end, a little less snappy into corners, no show-boat Drift Mode. Perhaps, the sweeter, more natural of the two, but you’d want the S.

It’s rewarding, engaging to drive – as much, if not more, pure fun to drive than the E63.

On the inside
Whatever your take on Mercedes’ exterior design ethos, you can’t argue with what’s happening inside: these are the best executed interiors in the business. Aside from the sheer quality of the materials, the GT 4-door’s cabin is dominated by the widescreen cockpit, the IMAX of cars, which combines two hi-res 12.3in screens whose bonded glass has a smartphone lustre. Choose between Classic, Sport and Supersport configurations, with all the principal multimedia functionality displayed on the central screen.

There’s also a new AMG Performance steering wheel, with extra buttons (and mini screens) located in the right and left lower spokes controlling the drive mode and dynamic settings. There are tiny touch pads on the wheel itself, as debuted on the current E-Class, the aim being to give you complete control without ever taking your hands off the wheel. Good in theory, but we’d suggest setting aside an entire weekend to figure it all out. It’s perhaps too clever for its own good, the sheer range and variety of functions, views and configurations leading to occasional frustration.

Then there’s the revised central ‘bridge’, which now uses recessed TFT displays rather than actual, passé buttons. There’s no rotary controller, either; instead, there’s a touch-sensitive track pad. Again, not an unqualified success as it all takes some getting used to.

But the basics are exceptional: design, quality, materials, driving position, seat comfort. In the back you can choose a four- or five-seat layout, the latter a £750 option. There’s also the £3,695 Luxury Lounge Pack which adds a passenger-dividing centre console with all manner of controls, screens and cup holders.

The boot holds 461 litres of kit, which doesn’t sound that much when an E-Class has upwards of 500 litres, but the floor area is huge, and of course it’s a hatchback, meaning its acceptable for dogs, bikes and other lifestyle accoutrements. Fold the seats and there’s 1,324 litres on offer. Just bear in mind you can only do that if you have the five-seat version – the others have a fixed carbon partition that’s claimed to further improve chassis rigidity.

Verdict
We’d speculate that the fashion for model proliferation has polluted the thinking of some of the big players (we’re looking at you Audi and BMW). Mercedes isn’t immune, but the AMG GT 4-door coupe is a more convincing addition to the range than you’d be forgiven for expecting given its very existence came about as a riposte to the Porsche Panamera.

It’s as impressive dynamically as it is desirable. It looks great and goes like hell, not just in a straight line but round corners, too. OK, so it’s not really a four-door version of the GT. But in smoothing off some of that car’s rougher dynamic edges, this might even be the ultimate iteration of the idea. 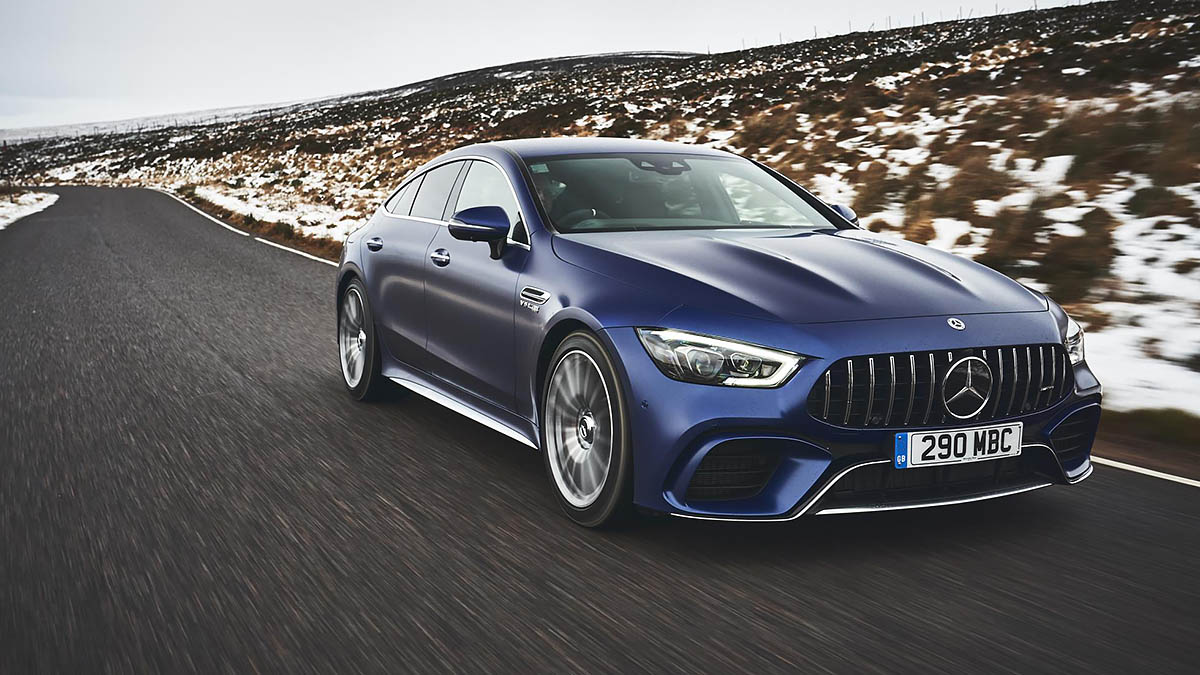 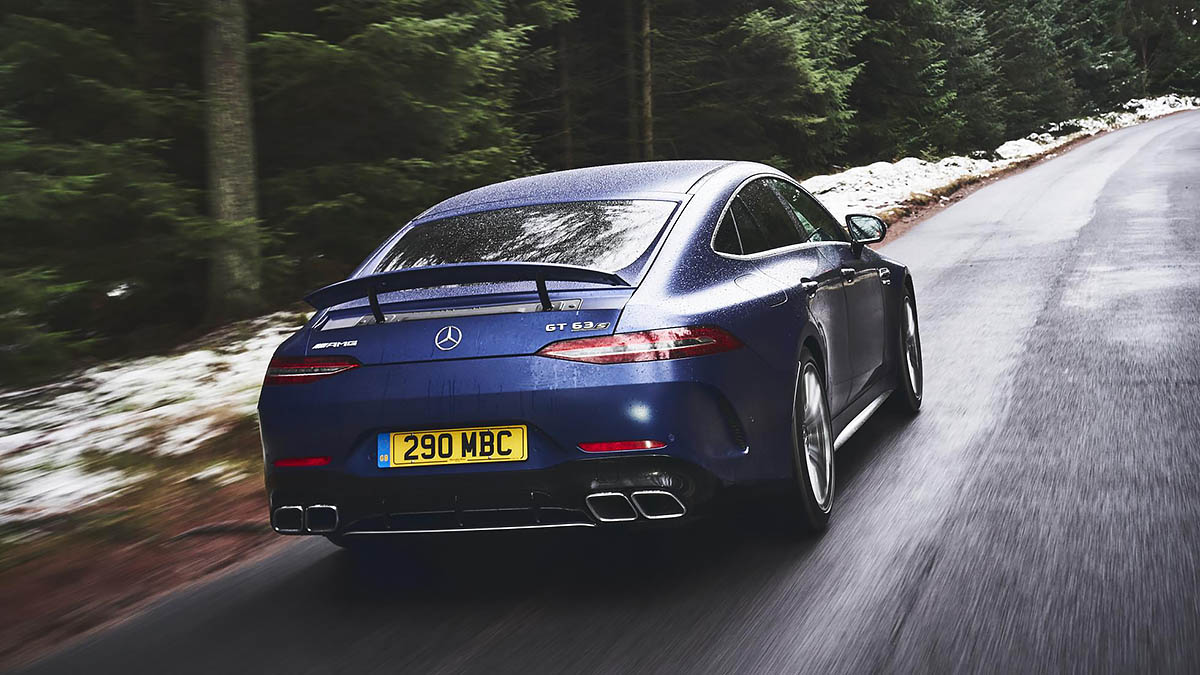 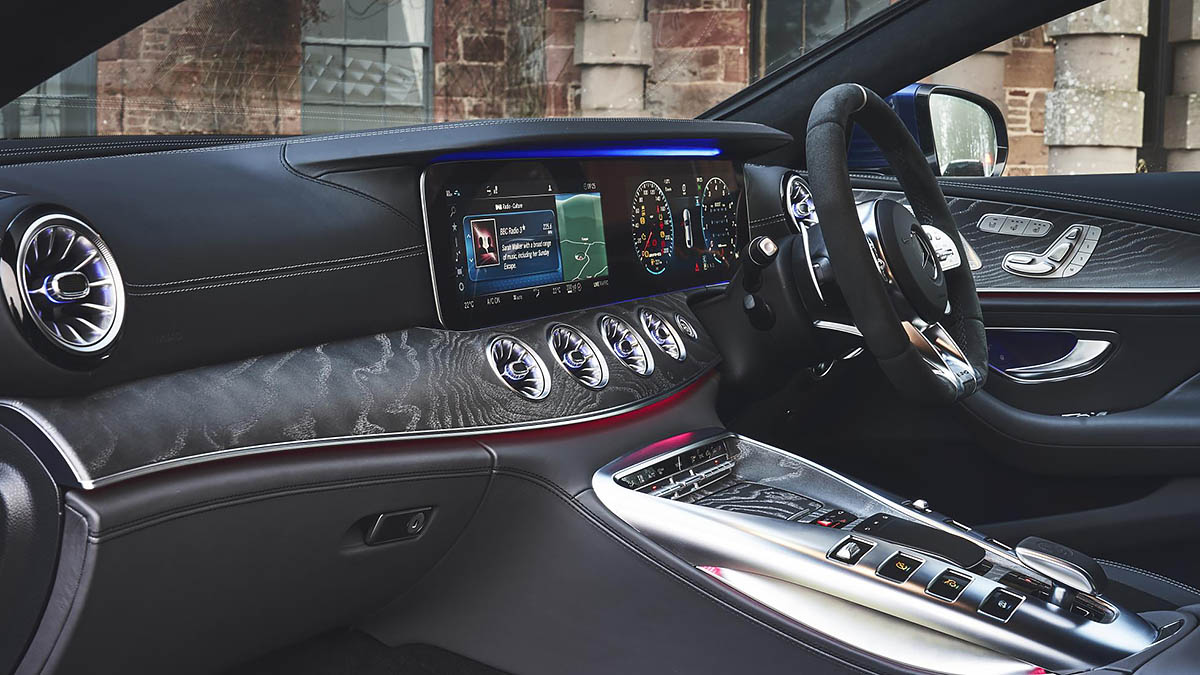 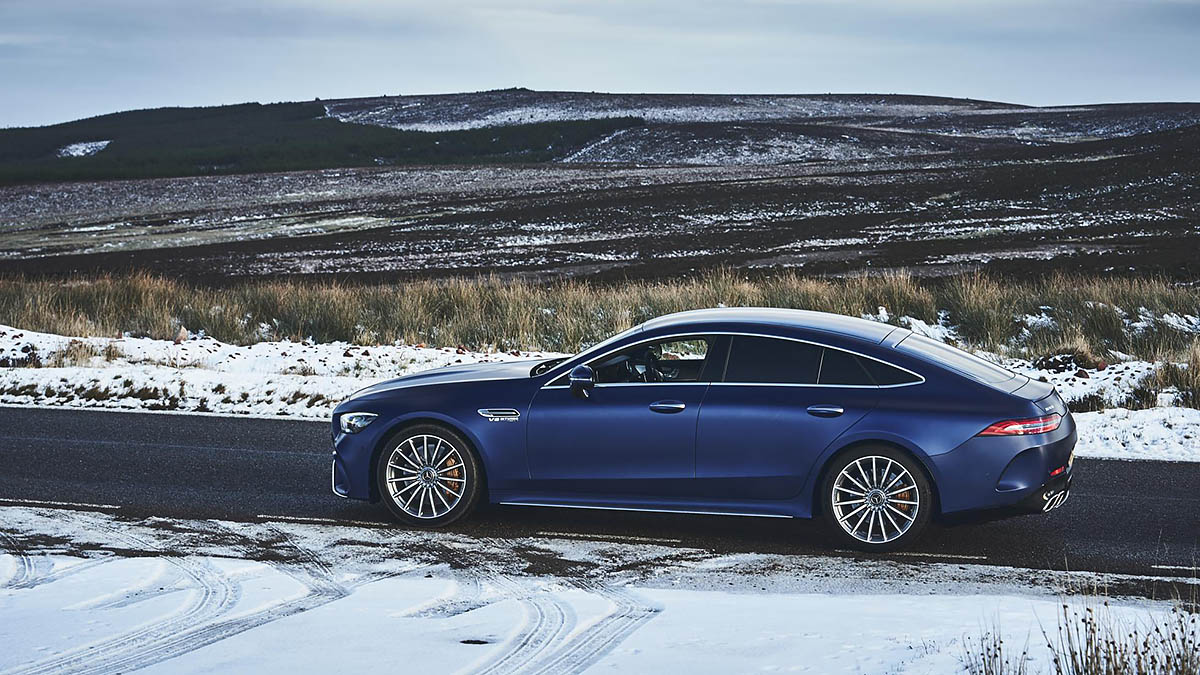 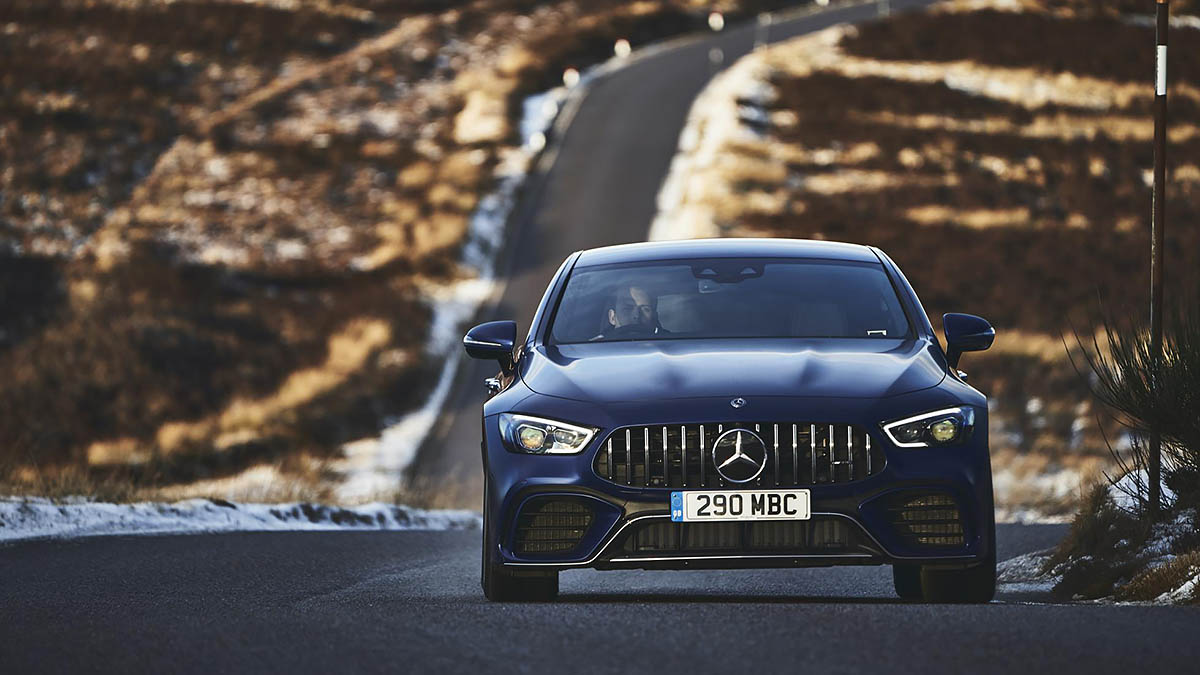 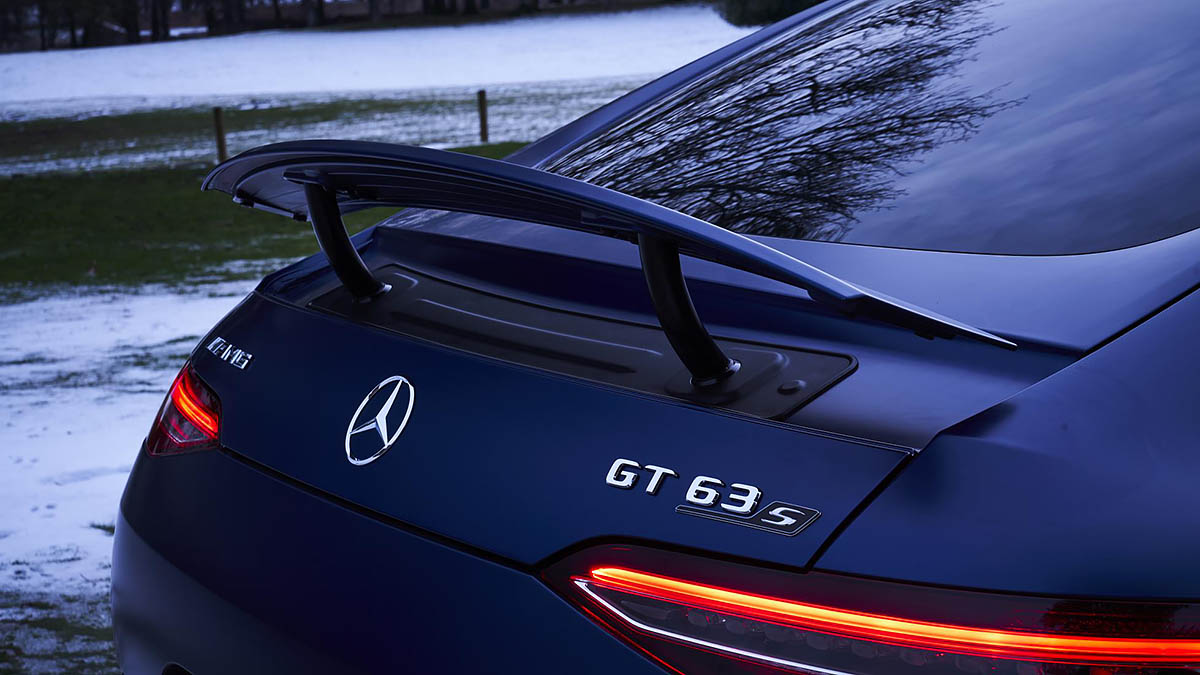 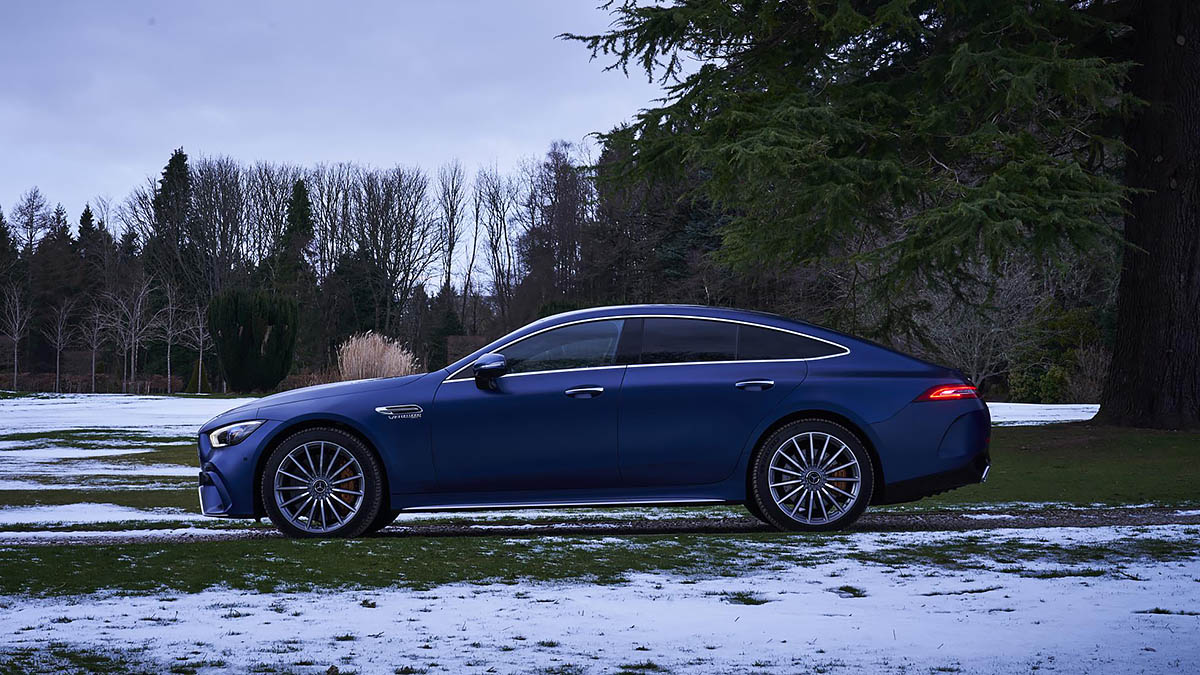 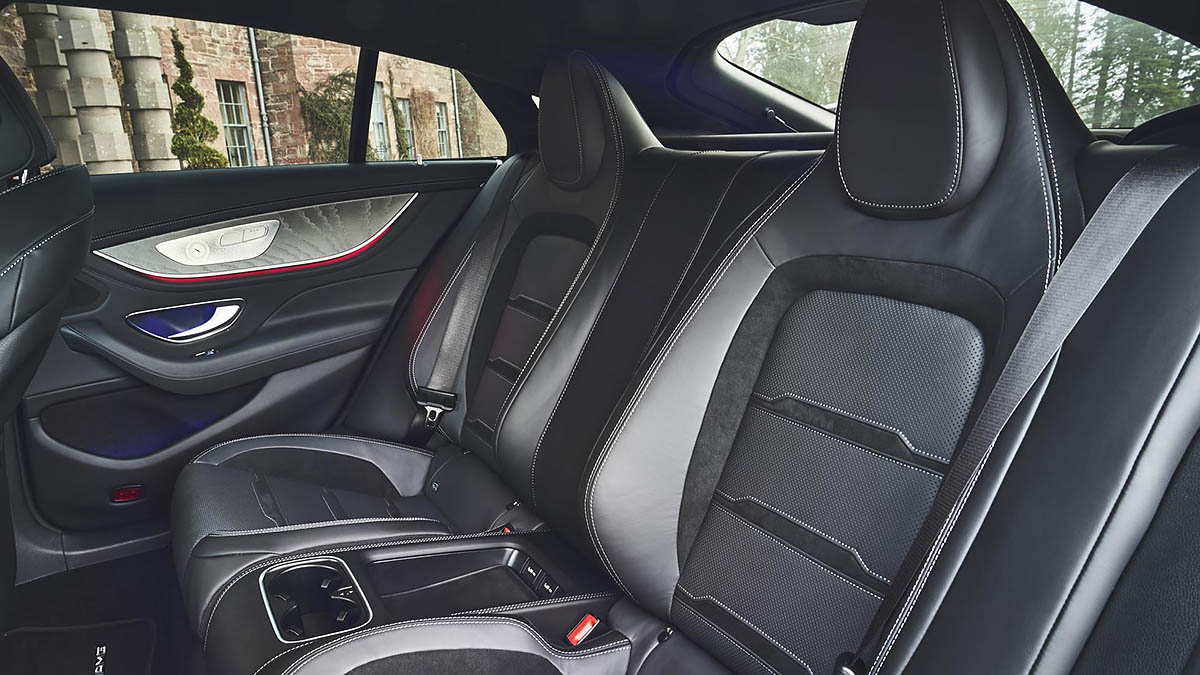 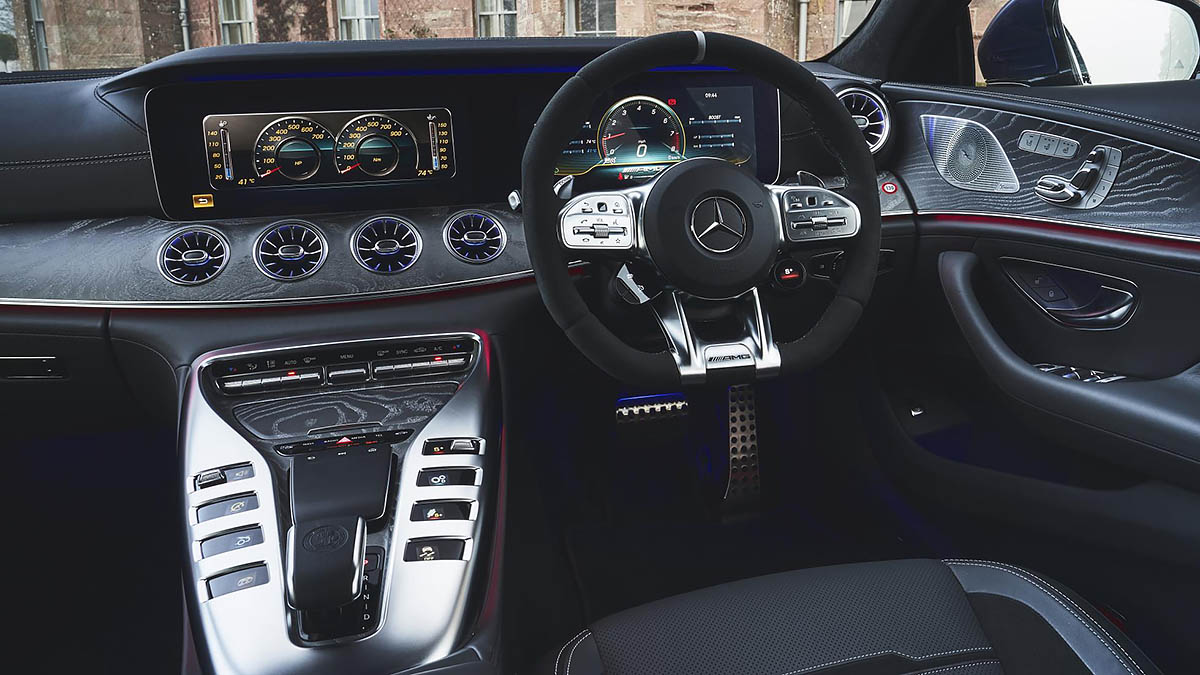