Overview
The Mazda 3 is a family hatch, not an SUV or a crossover or pretending to be something it’s not. These days you don’t go to the expense of creating a whole new platform from the ground up without doing more than one thing with it, though, so expect more to come from the 3’s box of bits.

Mazda is into simplicity, though. Just two engines are available: a 2.0-litre 120bhp petrol (naturally aspirated, against the turbo trend) and an unfashionable 1.8-litre diesel with a variable geometry turbo.

Replacing both the outgoing 1.5 and 2.2 diesels, that has 114bhp, but due to the pariah status of diesels, will likely to only account for five per cent of UK sales. Later this year, Mazda’s much anticipated Skyactiv-X compression ignition petrol engine will make its debut in the 3. Alongside it there’ll be a four-wheel-drive option – further evidence that Mazda is likely to build more than a hatch using these underpinnings. 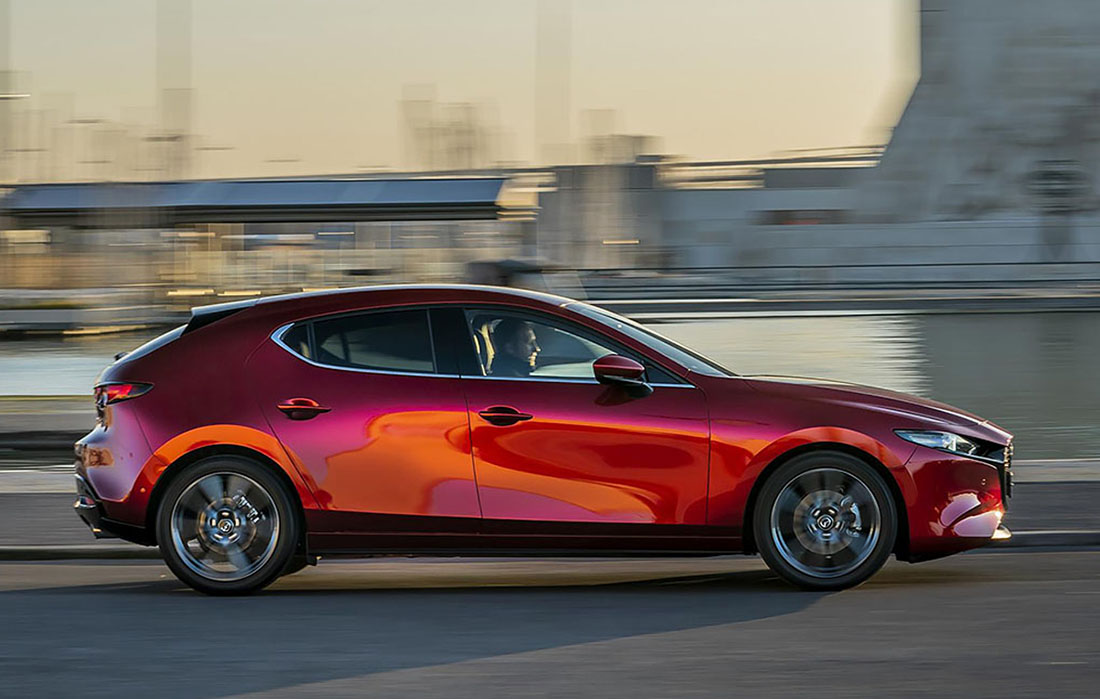 Both immediately available mainstream engines are Euro-6d compliant, WLTP-literate and CO2-canny, both boasting elements of the Skyactiv technology, including cylinder shut-off for the petrol. Each can be had with either six-speed manual or automatic – a conventional automatic, not a twin-clutch, note. So not only is it a £1,300 option, but it’ll nobble you on CO2 and economy as well. Both engines have a mild hybrid system that runs the electrics from brake regen.

Mazda talks about having redesigned the car from the ground up, paying attention to everything from reducing ‘visual noise’ in the cabin to reducing friction in the engine. Special attention has been paid to noise, vibration and harshness, to the operation of the switchgear, the processing speed of the infotainment, harmonising the quality of the white light in the cabin. The stuff that doesn’t make headlines, but is highly honourable. A typically Japanese approach – quiet, surreptitious, thorough.

It’s handsome, with overtones of Alfa Giulietta in the proportions, roofline and the roundels in the rear light signature, just without some of the Italian flair. Very neat, though. Not like the over-designed new Focus.

The 3 first appeared in 2003, and since then, six million have been sold globally. Yep, that surprised us, too. Over a million have come to Europe. The big years were 2005-2008, but a decade later sales had slipped to less than half that. So the new fourth generation 3 has a task on its hands. Not only to restore sales, but to do so in a marketplace that’s undergoing a seismic shift. Where’s the full hybrid, let alone a plug-in or electric version? Not here right now, nor on the horizon.

UK sales start in May, when the two engine and gearbox options will be available in a choice of five trim levels. Prices start at £20,575 and rise to £27,735. That upper limit will be breached when the Skyactiv-X (likely to have around 180bhp) lands this autumn, accompanied by a 200mm longer saloon version – although expect the latter to be a niche seller.

Driving
There’s not a lot wrong with the way the Mazda 3 drives. It’s smooth, accurate, good-natured, quiet and refined. For a regular hatch it’s rather pleasing. But it’s currently a car in in search of a decent engine.

Neither of the currently available Skyactiv engines has much life in it. The diesel is quiet at start up and has a commendably high 5,500rpm redline, but barely has the power (114bhp and 270Nm) to get there. It’s fine from 1,500-4,000rpm, relatively lag-free, but in the UK it’s only expected to sell to five per cent of buyers.

Still, it’s narrowly the pick of the pair. The 2.0-litre naturally aspirated petrol is the more disappointing. There’s a bit of torque from 3,000-5,000rpm (it peaks at 213Nm at 4,000rpm), but performance is sluggish, the engine drones and it’s not that smooth. You expect a Mazda to have a bit of pep and alertness, and at the moment neither engine delivers that.

Both, it has to be said, are clean and efficient thanks to their Skyactiv technologies, which for the petrol includes a mild hybrid system that uses brake regen to store power in a small battery that’s used to run the on-board electric systems. I suspect Mazda has done this for very valid engineering reasons, but it comes across as a token gesture. Where’s the actual hybrid? It does look like other firms have the jump on Mazda right now.

There’s other interesting bits of tech on the 3. A torque vectoring system called GVC that’s designed not to maximise traction, but to smooth out cornering, specifically the transitions between roll and pitch by gently pulsing the torque on the way into a corner. At the exit the brakes are brushed for a similar reason. The fact the 3 corners smoothly and deals with roll neatly suggests it works. The mild hybrid regen system is also used to bring the revs down quickly between upshifts, helping to smooth out the gearchanges. But it doesn’t blip the revs on downshifts, which would arguably serve a better purpose. There’s also cylinder deactivation in the petrol.

Gearbox advice for the floating voter: have the manual. The shift is great, slick and satisfying. The auto isn’t. It’s an old school torque converter that hunts for gears, shifts up and down inappropriately and is no better in Sport mode. There are paddles, but that’s not enough to offset the higher fuel consumption (the auto is roughly 3-4mpg heavier on fuel and emits another 10g/km of CO2) and the £1,300 Mazda charges for this off-puttingly poor gearbox.

It disrupts the 3’s otherwise impressive dynamics. Mazda goes on about Jinba Ittai – the sense of oneness between car and driver. And the 3 is a very natural car to drive. Provided you ignore the engines – or at least don’t ask much of them – it flows contentedly along. The steering has little feel, but the chassis isn’t stodgy and the ride is supple, well damped and well insulated – even on the largest 18-inch wheels.

On the inside
It’s very conventional, mostly eschewing the trend to exchange dials and buttons for screens. Most marques do this to clear up the layout, but here it’s clean and simple anyway. The heating is easy to use, the infotainment menu structure (operated by a clickwheel on the console) is easily understood. The switchgear is logically gathered. And it’s attractive and well constructed. You’ll be at ease in here, able to operate it on the move easily. So will your Aunt Mable.

The driving position is exemplary, with a massive amount of reach adjustment in the steering column and while there’s not enough underthigh tilt to bucket the seats, the backrest is very well shaped. It’s a comfortable car to be in.

As long as you’re in one of the two front seats. Those restricted to the rear aren’t going to get off to such a bright start. They’ll inevitably bang their heads on the door surround while getting in, and once recovered will note there’s not much legroom and it’s quite dark due to the thick C-pillars and smallish rear window. Better for kids of course, but not if they’re of the age where you have to insert them into seats yourself. That’s why family buyers favour a crossover. Less bending over. Nor is the boot much to write home about: high sill, only 358 litres.

The conclusion to come to here is that the Mazda 3 is either aimed at young singles/couples, or the older buyer. The more youthful are more likely to be put off by the fact the most potent version only has 120bhp and has all the snap of a limp salad, meaning for the time being it’s the more genteel the 3 is likely to appeal to. It is very easy to drive and operate, after all.

A couple of points to make here. Mazda has worked hard to improve the sound quality, moving the bass speakers to a more rigid mounting point under the dash and the tweeters to the doortop. There’s a Bose 12-speaker system on the options list. And the voice recognition has been enhanced – you can now ‘barge-in’, shouting over the voice guidance (excellent) and instead of talking your way through a menu system to call home, ‘one shot command’ allows you to say it all at once.

One last one. Just because Volvo does something does not make it a good idea. Mazda has copied the Swedes and migrated the keyfob buttons to the side rather than the face. It’s not right, and it’s not proper. Stop it.

It’s not a radical car, the new Mazda 3. And on one level that’s disappointing. We’d like to see Mazda pushing into hybrid and electric technology by now. This is an engineering and design-led firm, and it would be good to see it leading. Instead we have a very regular hatchback with – currently – a choice of only one petrol and one diesel engine. Neither with much spark of life in it. And a traditional (not to mention underwhelming) automatic to partner the manual instead of a twin-clutch. Nor is it particularly spacious.

Yet you get the feeling that Mazda cares. There’s little cynicism here, instead the details have been worked to improve the driving and ownership experience little by little. The interior design and comfort, the low noise intrusion, the supple ride and handling. And below that the small things have been done well - the cabin lighting, the switchgear operation and so on.

Things have been done for the right reasons – not to gain headlines, but to improve quality of life. It’s a human-centric approach. And the result is an easy, good-natured, undemanding car to live with. 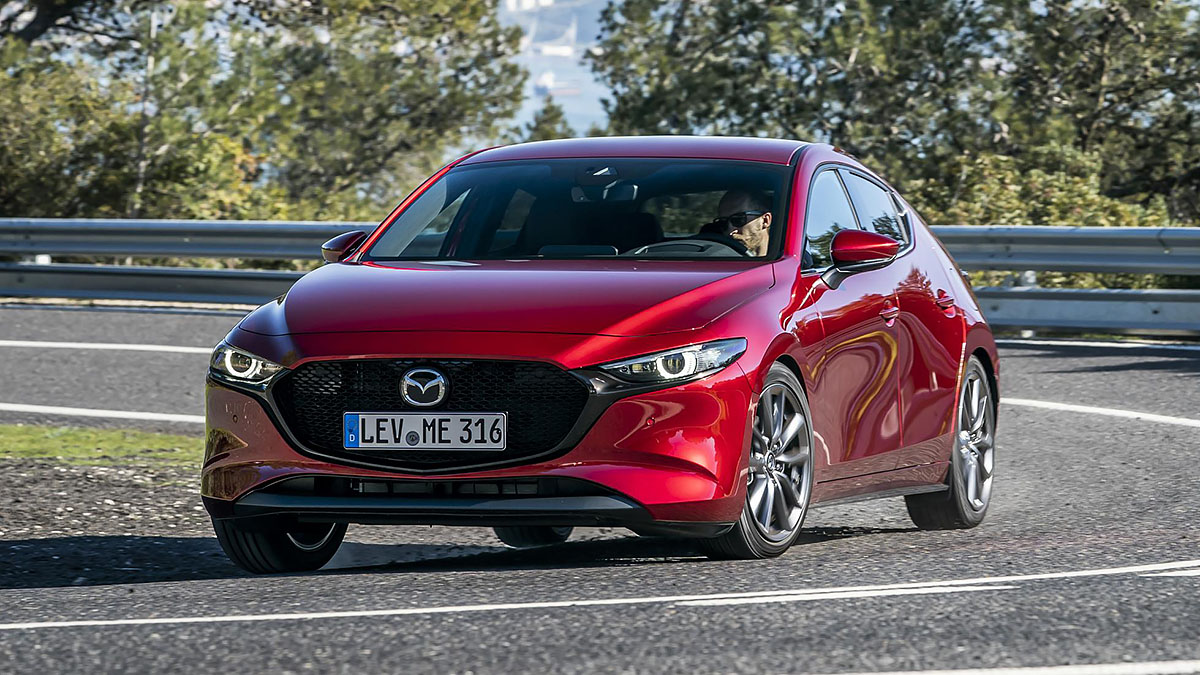 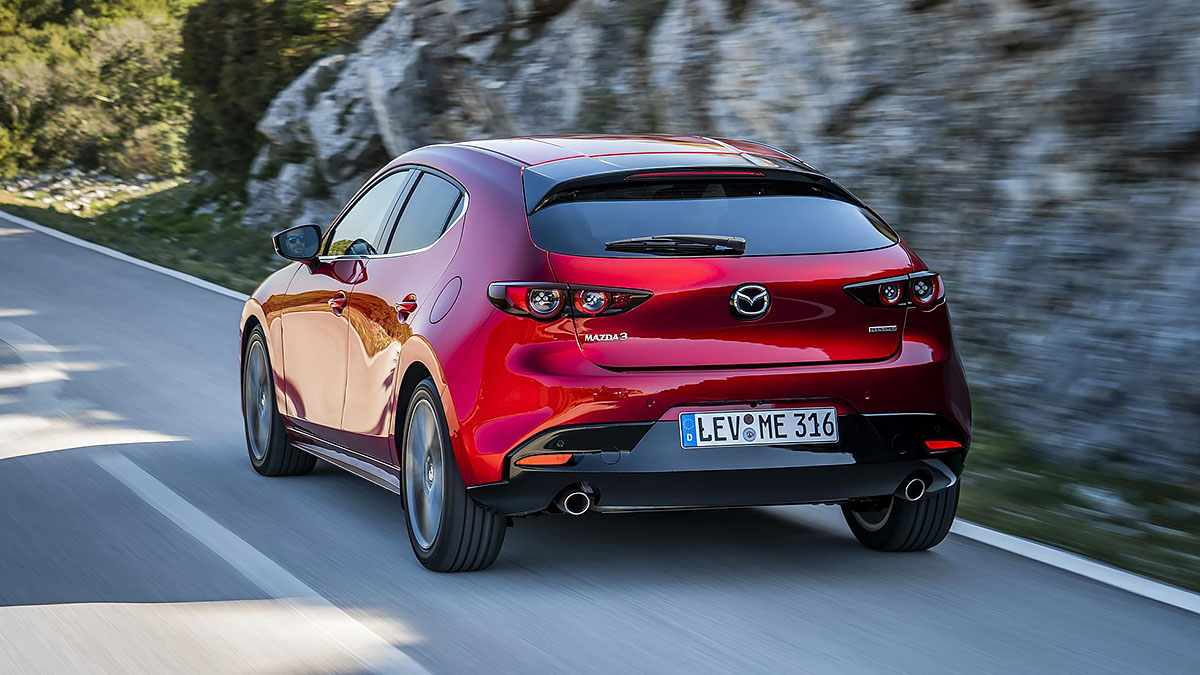 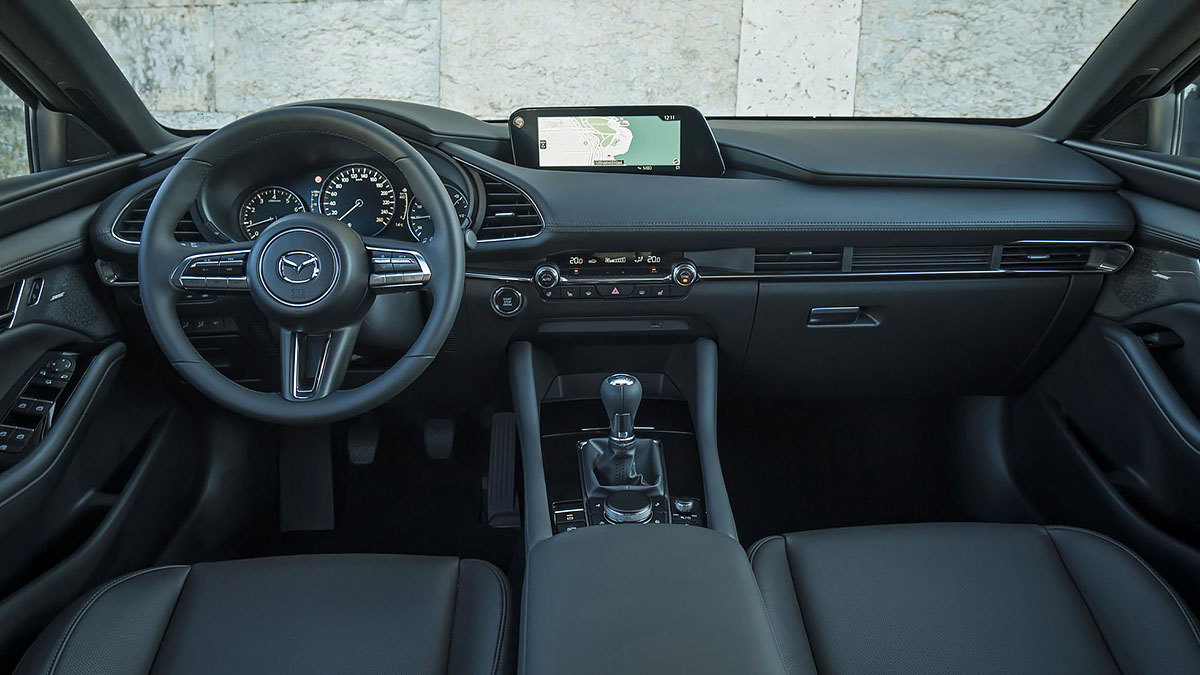 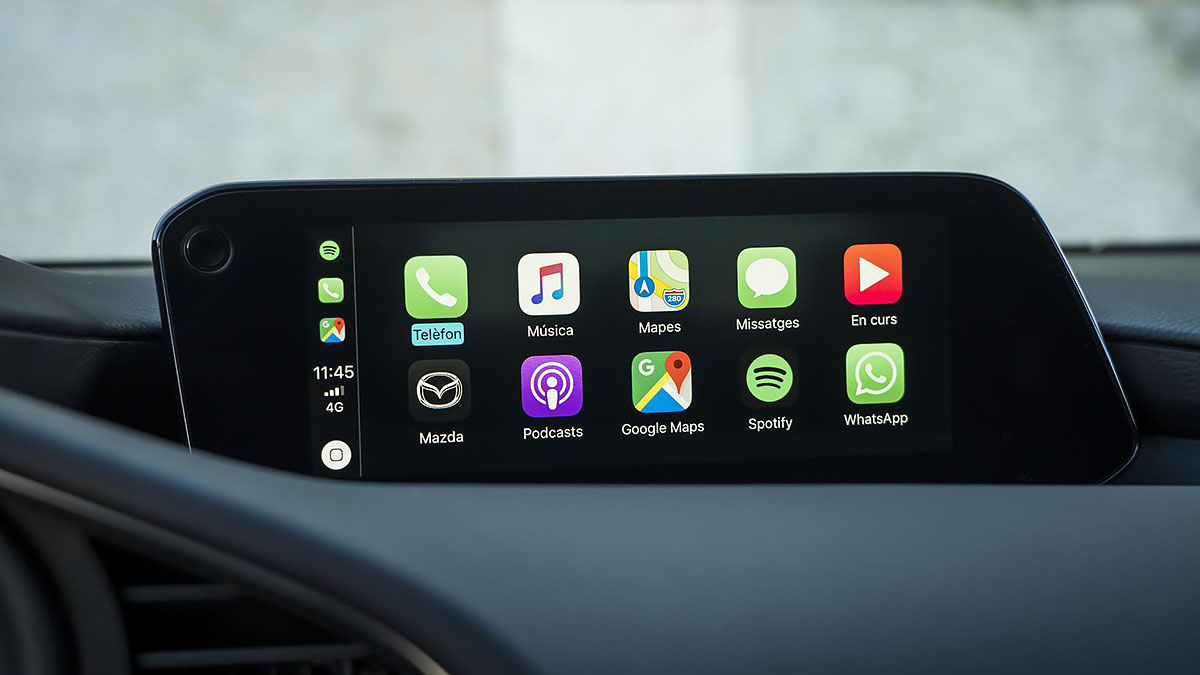 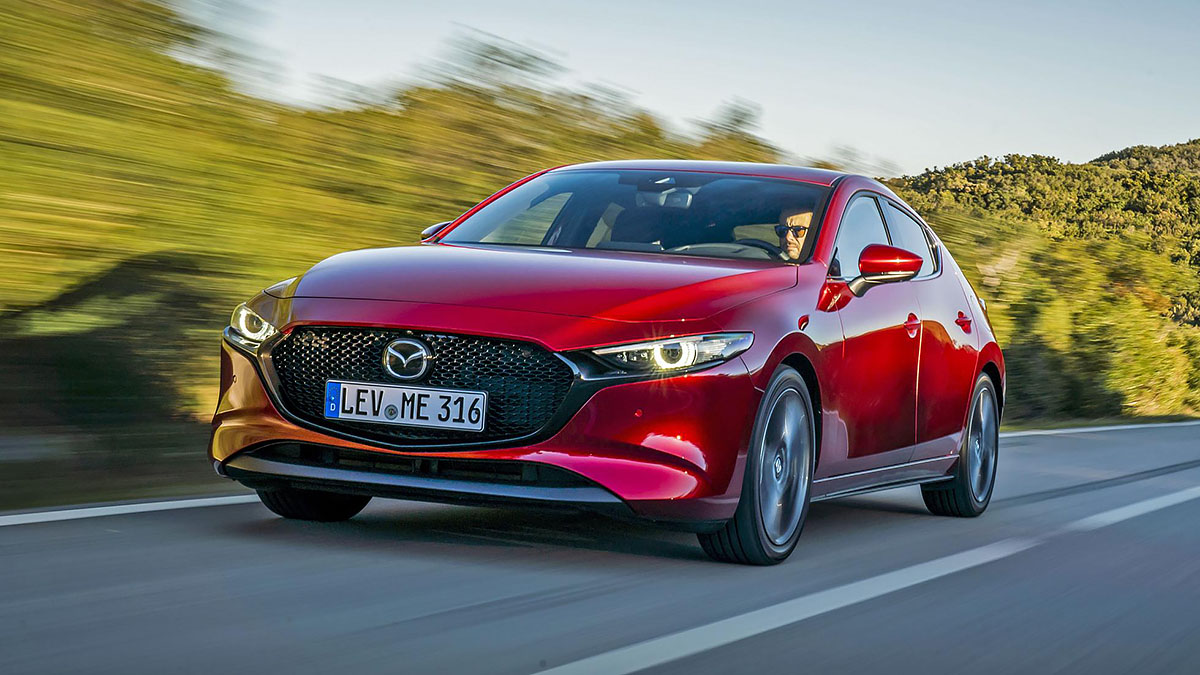 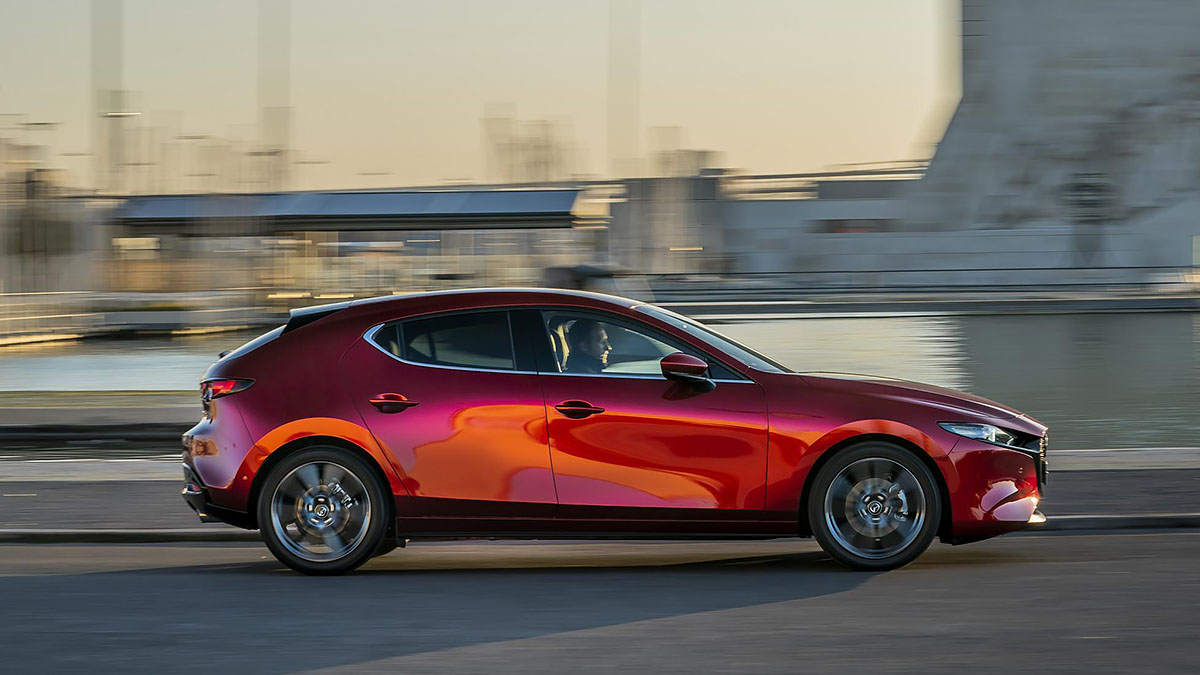 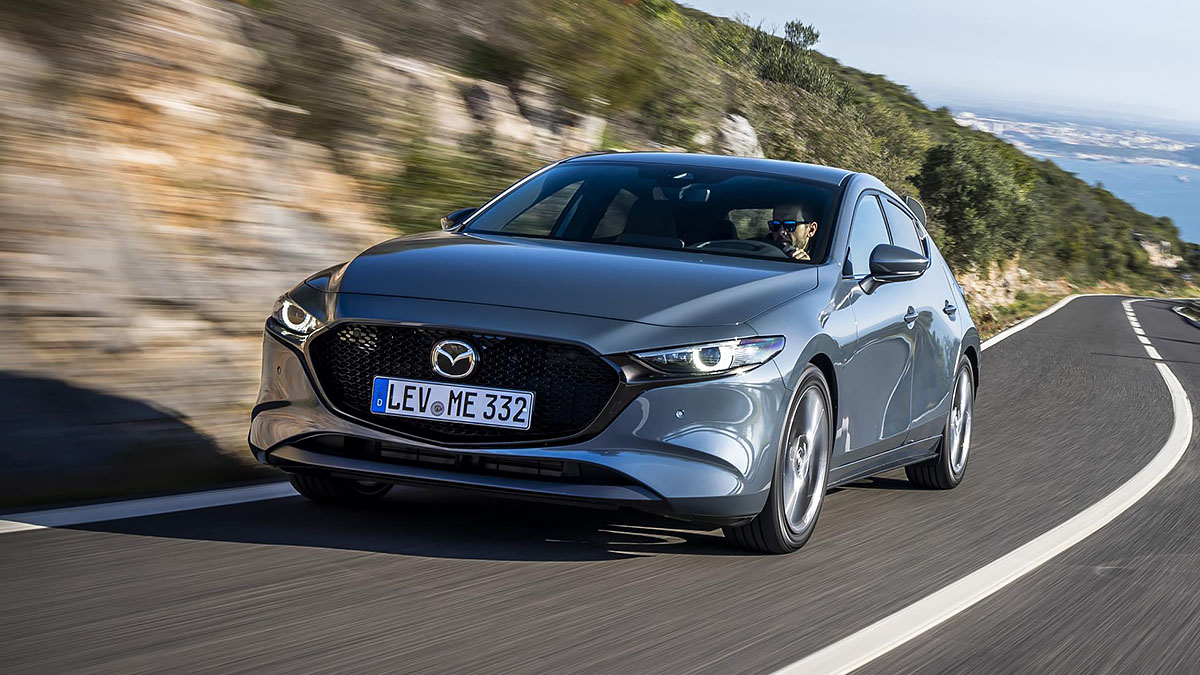 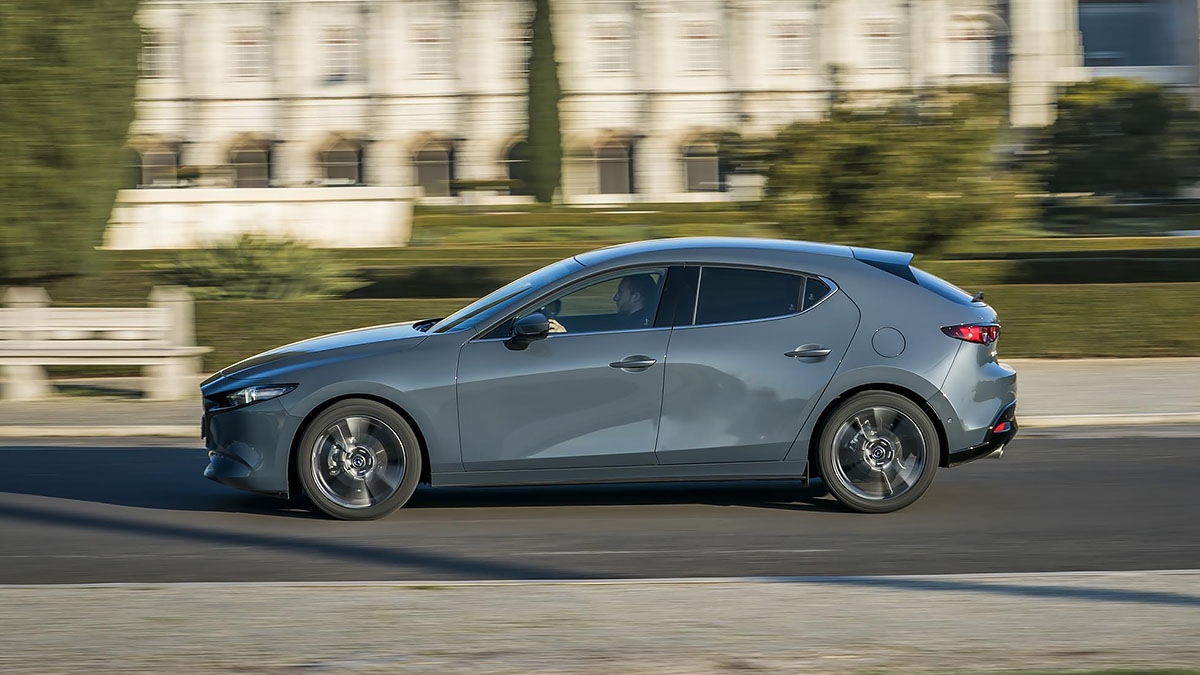 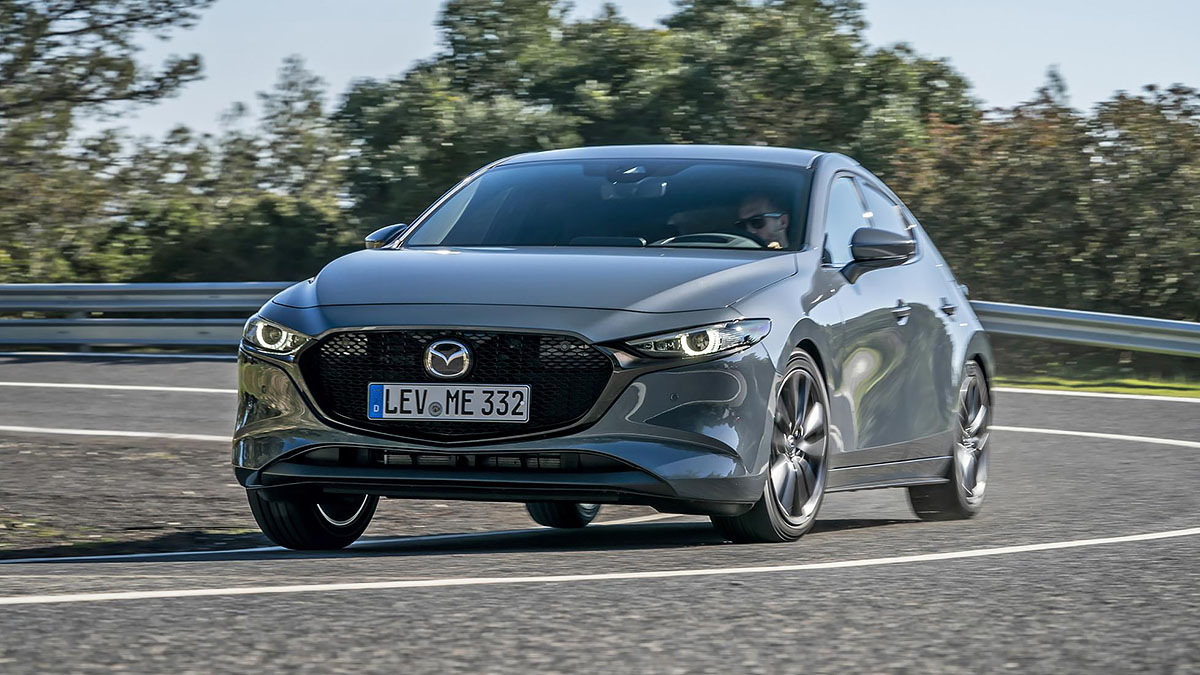 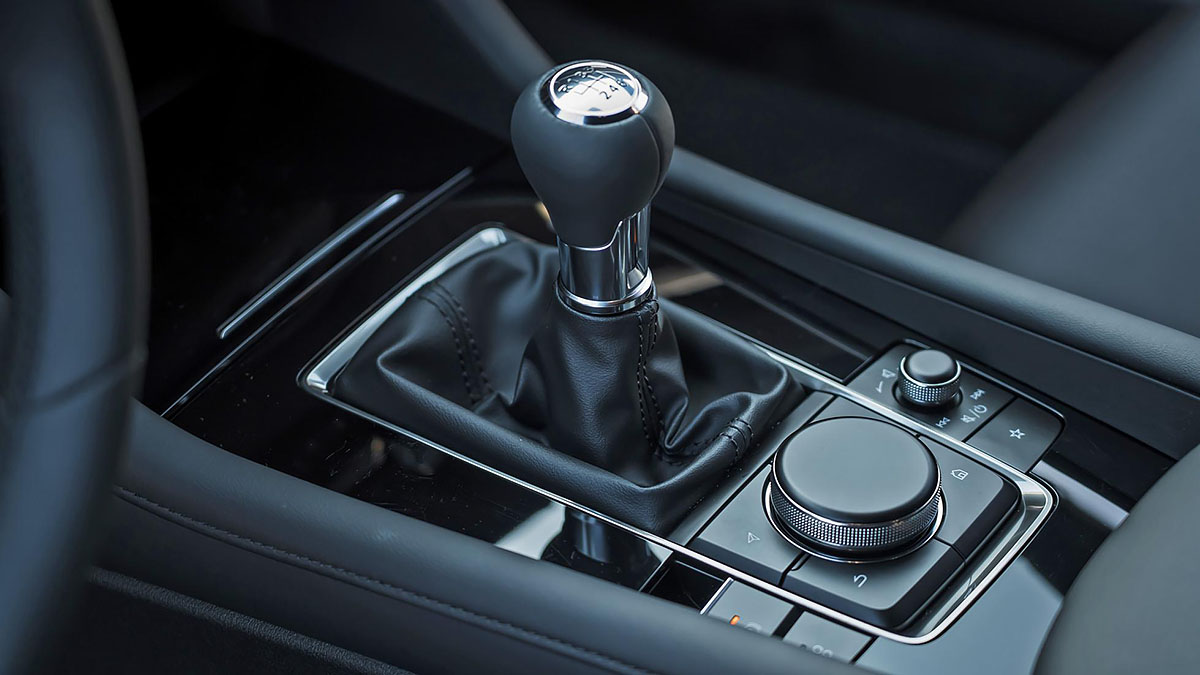