The most hotly anticipated car of the year?
Well, maybe it’s no Alpine A110 or McLaren Speedtail. But even so it’s pretty hard to imagine any other sub-£20k four seat 1.5-litre car gathering quite such a cult following.

What’s the scale of the demand?
Well, even as deliveries begin, there are already 4,000 serious expressions of interest registered on Suzuki’s UK website. If only half of them actually buy, that still means a waiting list well beyond a year.

Demand has been so strong in Japan for the Kei-car version that the factory’s at full stretch.

Kei car?
Yup, there’s a version with a 660cc turbo triple, shorn of its plastic wheelarch flares. Thus does it fit into the approved Japan-microcar dimensions. And, in all probability, the hand-baggage limits for RyanAir. And our one?
Ours has a 1.5-litre naturally aspirated engine, making an entire century of horsepowers. Weight’s a measly 1,135kg, and price for this posho SZ5 trim is sub £17k (RM92k). But we’d save ten per cent and go for the SZ4. Steel wheels are utility-perfect, you don’t need the clunky fitted nav (clamp your phone on), and heated seats are superfluous in a ‘professional’ lifestyle because you’re already wearing outdoor gear.

And this export-version Jimny is still miniscule: 3.6 metres from end to end, including that outdoor spare wheel. There are four seats, each of which can accommodate an adult. But really it’s a three-seater because you’re going to have to fold one of the rear ones to make the boot bigger. With both back seats up, the boot is 85 litres. Or the contents of one Inter-Railer’s rucksack. There’s no parcel shelf, so the stench of month-old studenty underwear would permeate the cab.

So what’s it like to drive in the UK?
Charming. I’m sorry to use this old cliche, but it has character.

But ‘character’ is always a synonym for ‘deficiency’.
Correct. Using the metrics by which we usually judge a new car, it’s crap. Bouncy in a straight line, vague around bends and slow everywhere.

The short wheelbase, narrow track and softish springs, plus the fact your seat’s so high up, mean you’re rocked and pitched all over the place. The steering’s vague and extremely low-geared, so you’re twirling the wheel like a winch. It doesn’t self-centre much either. You’re constantly correcting even on an A-road. A briskly-taken right-turning roundabout calls up vast understeer, whether or not you engage 4WD.

But that’s OK because the performance harmonises. It’s not like one of those V8 Defenders or last-gen AMG G-Wagens where the engine was far too much for the chassis. It’s all held in balance. So you seldom scare yourself with speed. A mild dual-carriageway incline is enough to hold it below 113kph even with the throttle pinned.

The ride is like turbulence in a small plane: no harsh impacts, just a sequence of perturbations of random direction, amplitude and frequency.

But I absolutely cannot leave it at that. Because I enjoyed it.

Explain…
Driving the Jimny around the British suburbs, or even more so down a British rural road, is a case of teaming up with another being, one that brings its own opinions and motions. Like riding a horse perhaps (which isn’t my thing) or sailing a dinghy on a lumpy sea (which is). Input does not meet a direct and proportional output: you have to work with the Jimny, rather than try to subjugate it.

Stop judging it as if it were a sports car.
Sorry, we’re just trying to describe it at normal road speeds. A conventional small car – Suzuki’s own Swift or Ignis – is in a different, higher, orbit.

The Jimny is a prophylactic to speeding points. Most limits seem like a target rather than a restriction. If you come up behind a pensioner-pedalled Proton, you don’t try to hustle past. Tag along behind and enjoy the scenery.

The buts continue. It scored only three stars in Euro NCAP.
Yup, same as a Duster. Part of the fault lay with an airbag flaw which is probably fixable. There’s effective auto-braking. And good side impact performance, which is a surprise given how close you are to the edge. Two more things: one, three stars now would be four or five of a few years ago. In a Jimny, you’ll be going slowly at the time of the crash…

OK, so how’s it as an off-roader?
Amazing. The vertiginous approach and departure angles, and the long-travel live axles, see it climbing ditches and obstacles with ridiculous ease. It doesn’t have diff-locks and doesn’t need them: with this much articulation, the electronic fiddle-braking is enough. The small size has you weaving easily down forest tracks and between trees. The tiny turning circle is even handier: you can avoid obstacles at short notice, rather than have to surmount them. Only issue is the throttle feeling over-eager in low range, making it tricky when you just want to crawl gingerly. 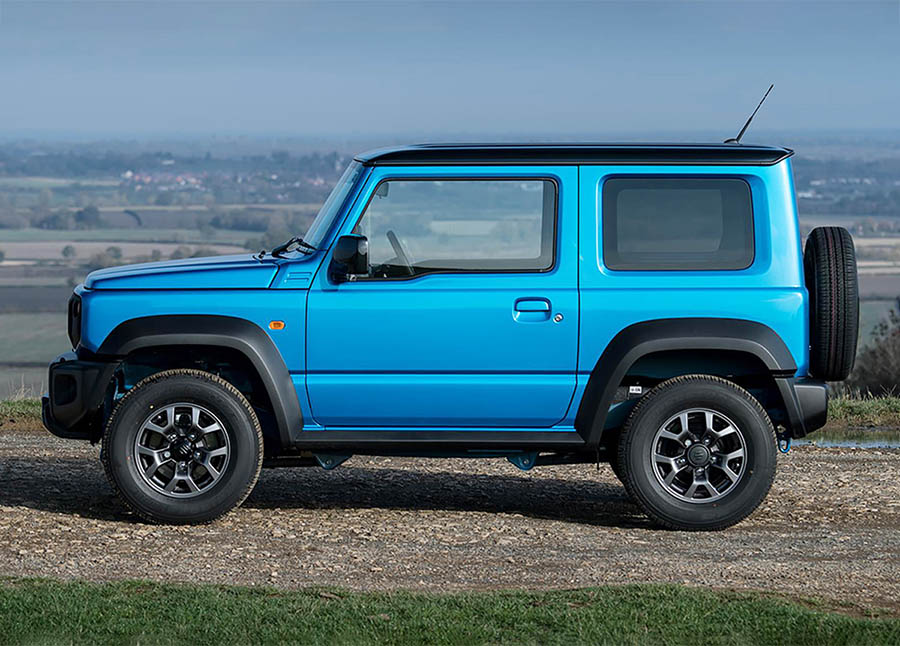 Old Jimnys are popular with farmers. Will this one do?
Yup, it’s got a tougher-than-ever separate chassis. You can tow 1.7 tonnes. Which is a couple of dozen sheep and their trailer.

Oh good. Hauling livestock trailers through fields is something we all need.
Well, the Jimny, as we’ve seen, is a tool, and anyone who has or wishes they had a shed is fascinated by tools, whether or not they need them. (Albeit if you had to do 500 motorway miles in a day in a Jimny, you’d be the one feeling a tool.)

Give us a more normal British use-case.
It’s a fine urban machine, too, and not just because it can go up-kerbing. Its biscuit-tin size and slabbiness invite it into the gaps and parking spaces everyone else leaves behind.

And of course the reason we all love it even before we’ve driven it is the look as much as the size. Its sheer smallness says a cheeky up-yours to the aggressive up-yours-ness of a town-bound Jeep or Defender or G-Wagen. 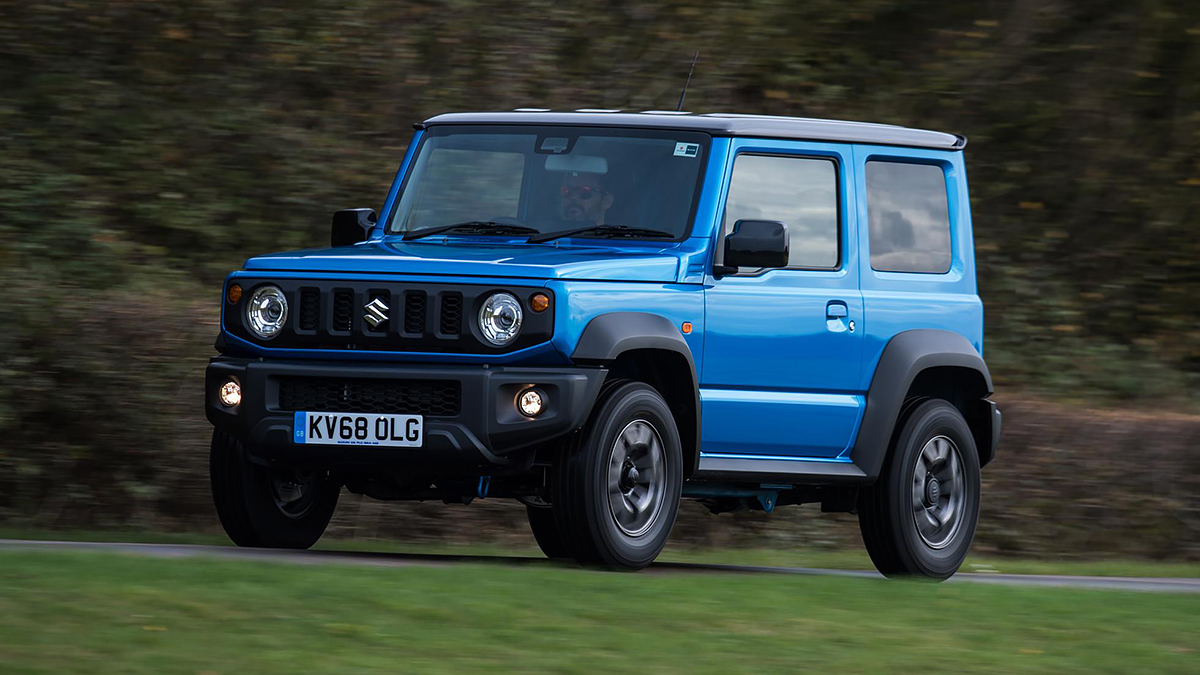 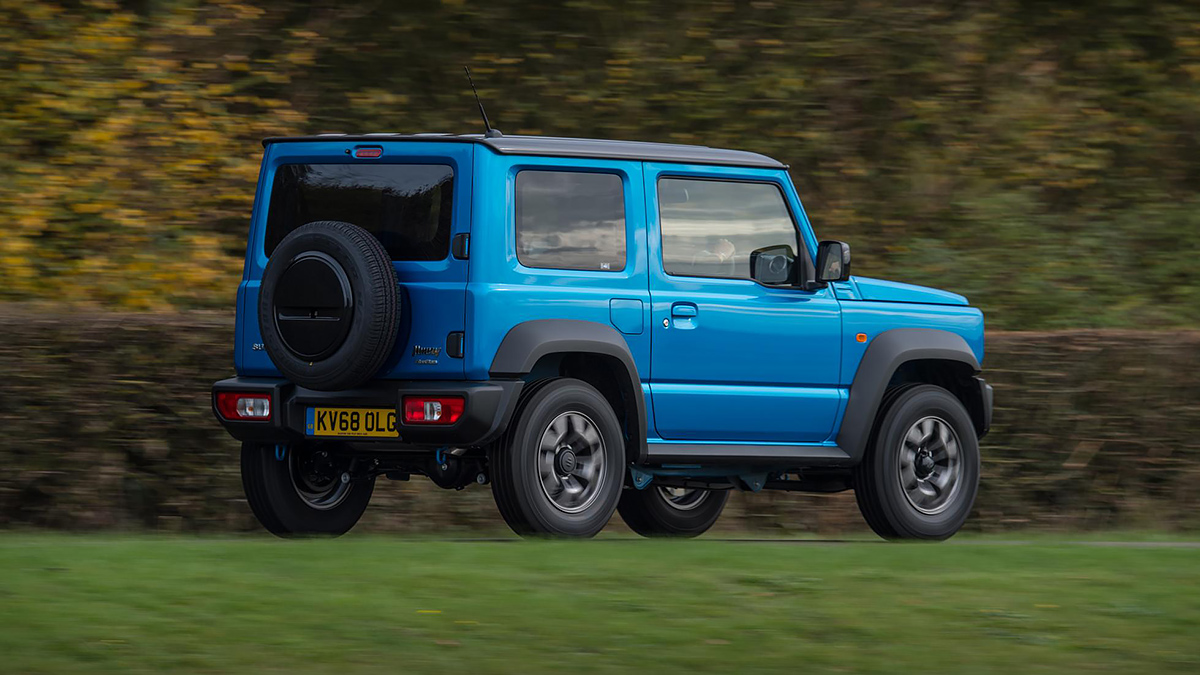 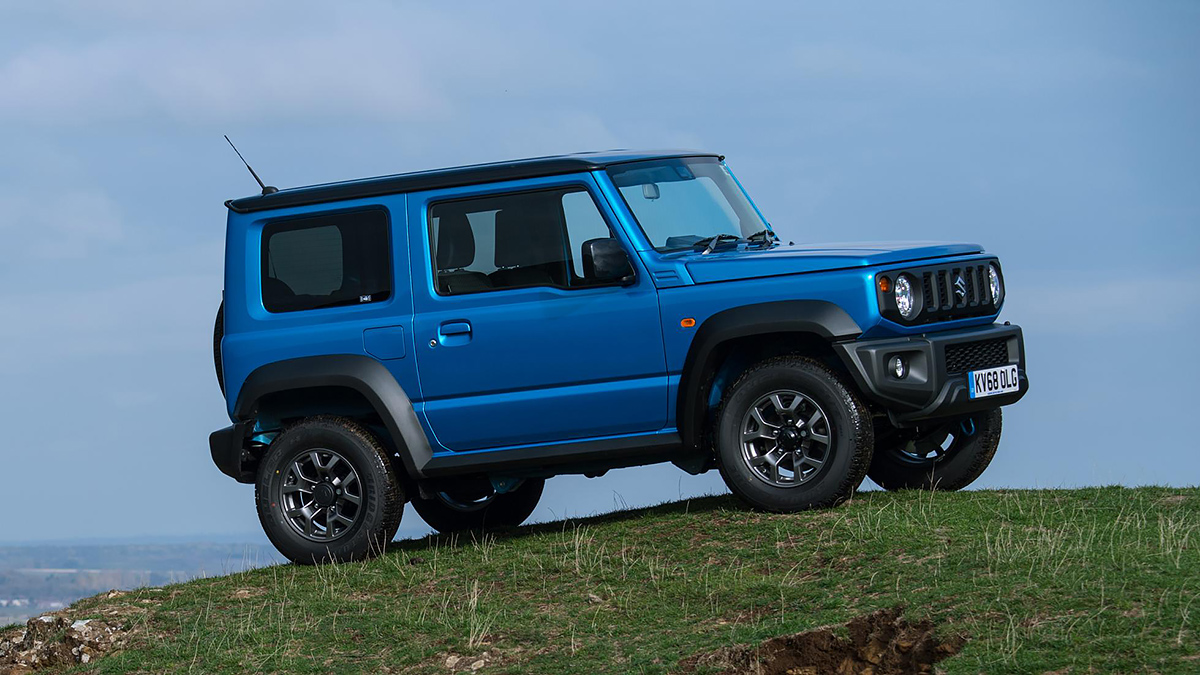 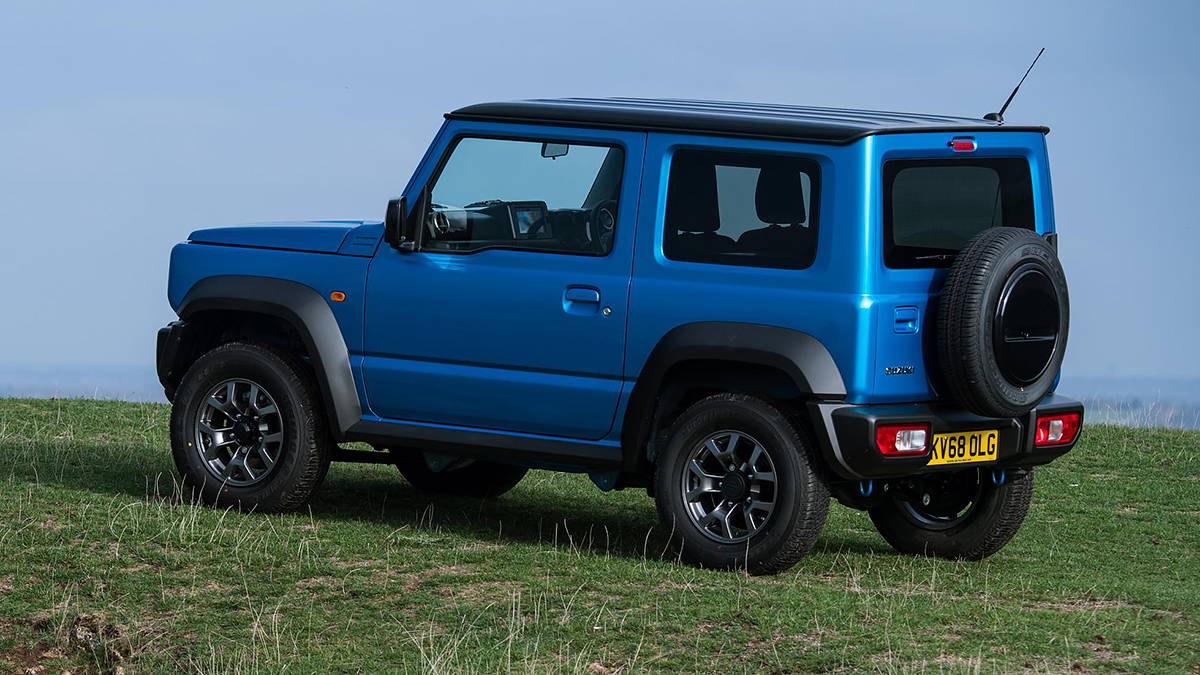 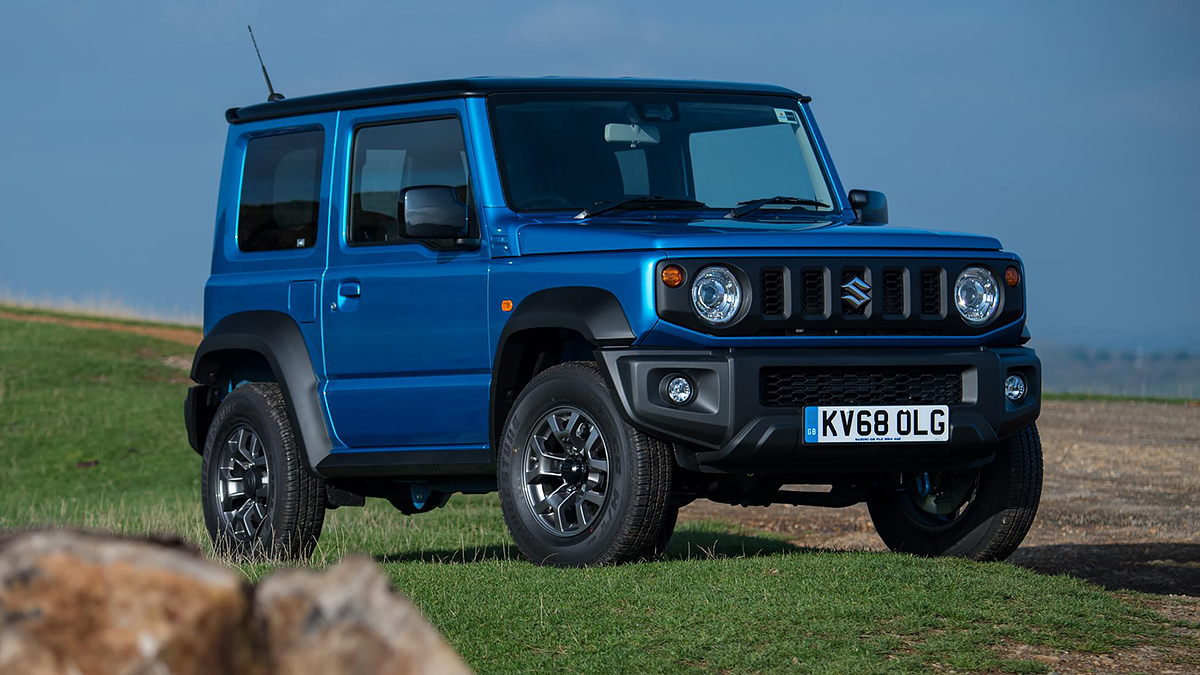 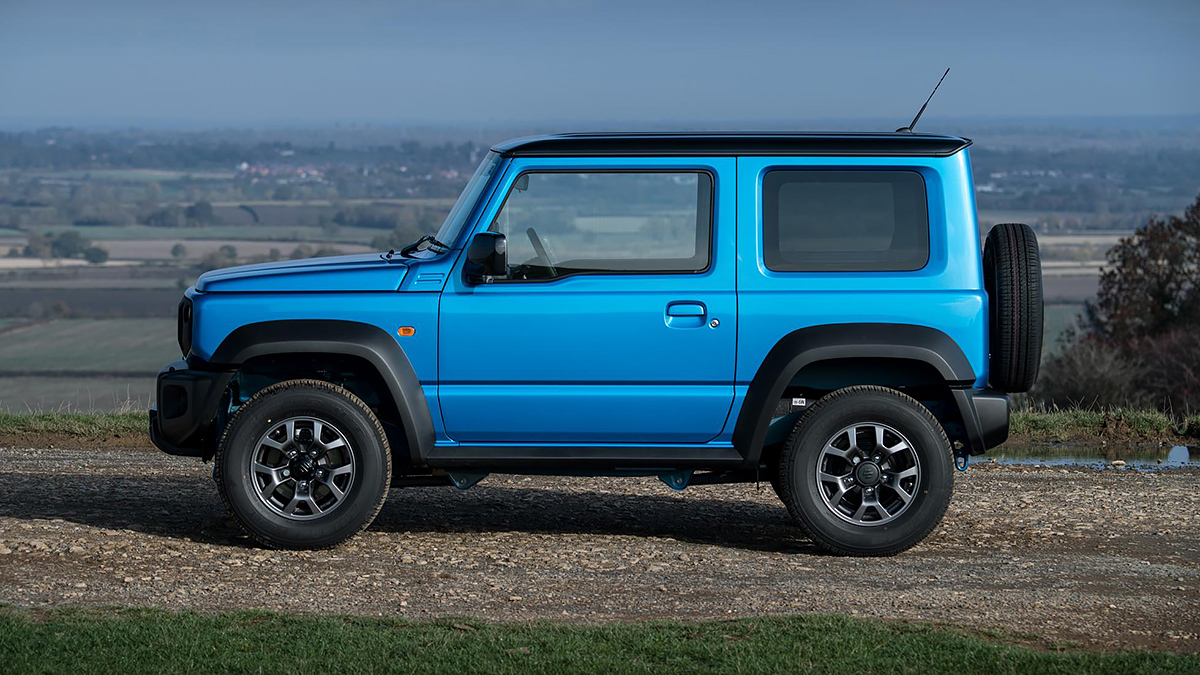 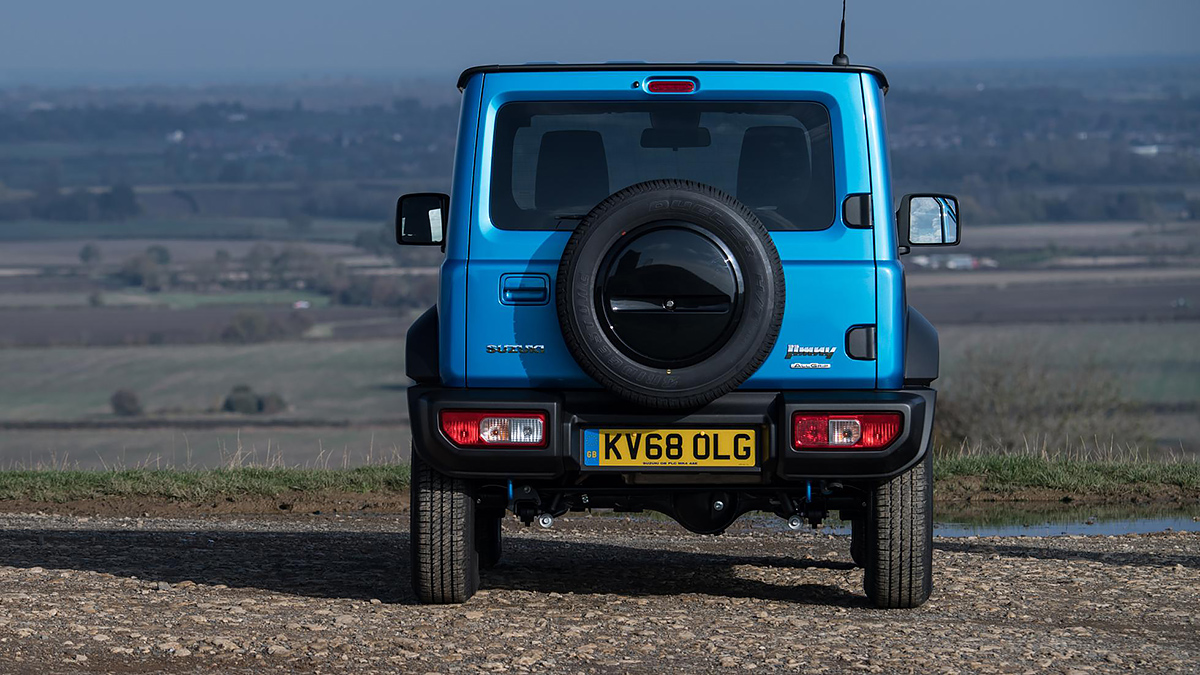 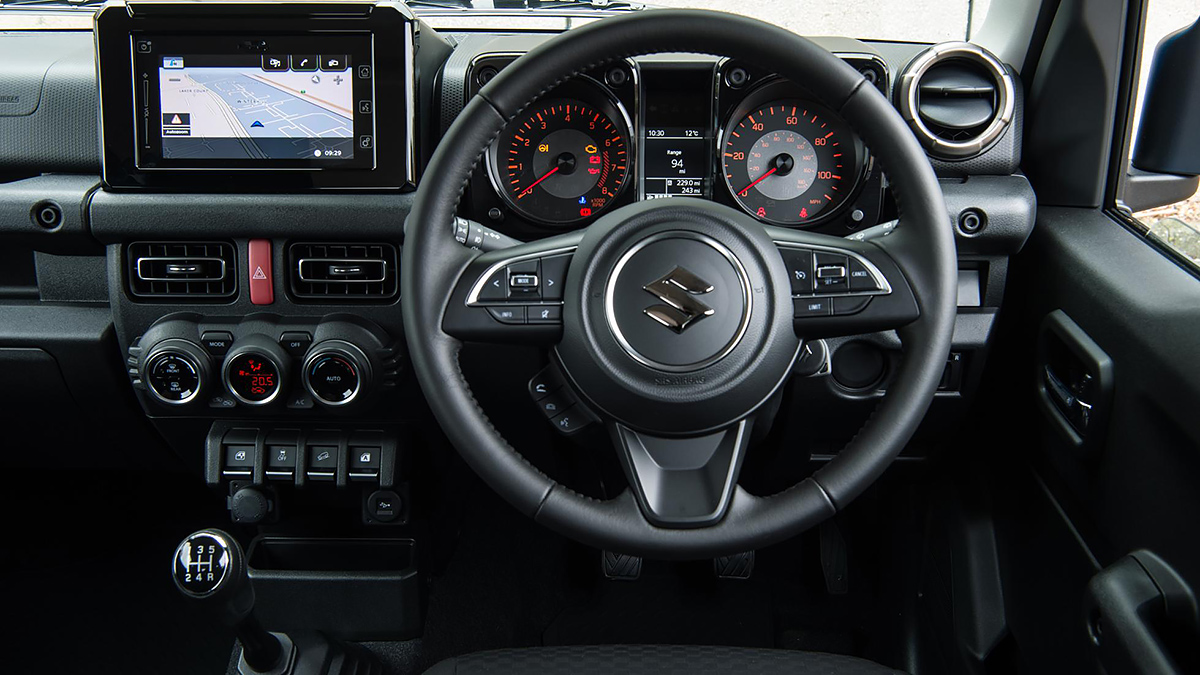