Mercedes-AMG GT R Pro review: too much for UK roads?

What do we have here then?
An AMG GT that’s ready for an audition for next year’s Love Island. It’s been to the gym, got swole and then had a cosmetic facelift (check out those new, slightly squinter headlights) so it looks – what do people from Essex say? – reem. Oh, then had some green rave paint applied to let you know it’s here for a good time. Joking aside, this ladies and gents, is the AMG GT-R Pro: a £188k track-focused variant of Merc’s long-bonneted muscle car that now sits at the top of the AMG GT tree.

Oooooo ‘Pro’. That’s sounds rather try-hard.
Well, it’s got the credentials to back it up. Even though it has no more power than a standard AMG GT R (577bhp) and the same Michelin Cup 2 tyres, this new Pro is around seven seconds a lap faster around the Nurburgring Nordschleife than that car. Late last year, it clocked a time of 7min 4.6secs, stealing the crown off itself and making it one of the fastest front-engined road cars ever to lap the Green Hell. Remember, the GT R was dubbed the ‘Beast of the Green Hell’. So this must be, erm, ‘Beastier of the Green Hell’.

Wait a minute, haven’t you already driven this? It sounds familiar.
Yes, yes we have. But only on track. Now we’ve driven it in the UK on our terribly destitute tarmac to see if a sharpened GT R works over here in Blighty. Anyway, you’ve probably forgotten what we said about it as you’ve probably looked at 4,000 memes since then. 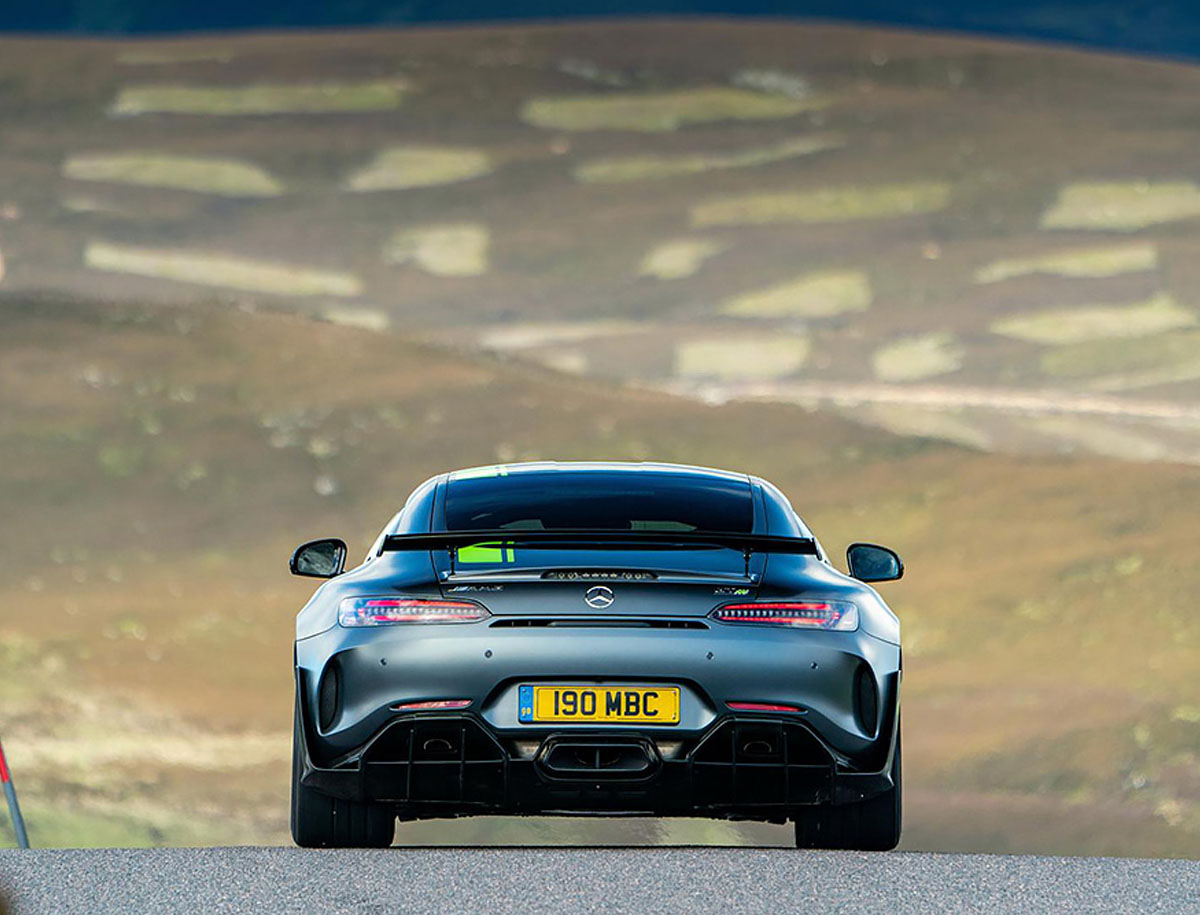 You’re right. God bless cat memes. So please give me a quick reminder of what’s new
Like we said, no more power. But you still get the bassy twin-turbo 4.0-litre V8 with 577bhp and 9700Nm of torque. However there’s lots of motorsport nous that’s been harvested from the wildly successful GT3 and GT4 cars. That means proper race car looking bits, notably slashed front wings with louvres to make sure those big front wheels don’t start lifting, bespoke turning vanes, a new front splitter and rear diffuser, this time mounted on milled aluminium brackets that look properly serious. At first glance the rear wing looks the same, but it’s adjustable and gains a Gurney lip for the Pro. All this added aero tech gains 99kg of downforce at 250kph.

But that’s not the only adjustability that’s been incorporated. There’s now comp-spec coil-over suspension, so it’s adjustable for bump and rebound. Pitch, roll and traction are all optimised as a result. This adjustment now requires manual labour, rather than selecting suspension settings on a button. But no spanners are required, it’s simply done by winding the dampers up or down on a twisty clicker. The rear axle now also features Uniball spherical bearings on the lower and upper wishbones. In other words, if you’re on a track day and being slow, you can come in and look under your bonnet, twist a few knobs and head out with your new setup to fish for new excuses.

As it’s a track special, I guess lightweighting has occurred.
Yes, but not a crash diet. It weighs 1,575kg dry, 25kg less than the R. So it’s still got some timber to shift. That reduction is largely thanks to a carbon fibre front anti-roll bar, hollow tube steel one at the rear, carbon fibre shear panel at the rear underfloor (that also helps to stiffen the thing up). There’s also a carbon fibre roof, side sills, as well as on the splitter and diffuser and lightweight carbon seats as standard. The Pro package also gets the GT-R’s optional Track Pack and ceramic brakes as standard. So you also get a roll-cage, four-point harness and a fire extinguisher thrown in.

The engine still dominates proceedings, thumping away up front with an incredible slug of torque to settle into and use the grip.

What’s it like on the road?
Brutish but useable. You’d expect something developed for the track to be a nightmare; overly stiff, invidious, hard to live with. But the Pro is no more hassle than the normal GT-R. Actually, I’d actually go as far as saying it’s easier. See, when you get in a proper motorsport-derived car they tend to ride well as money is spent on damping. Sometimes there’s a weird falsity in fast performance cars (normally formulated from marketing departments) that they need to be brittle and stiff to make you feel like you’re getting more performance. Whereas if you get in a well set up race car with decent dampers, it can handle bumps and its body control with far more aplomb. This goes for the Pro - there’s more squidge to the setup but no loss of control. We’d like to say that’s because we spent hours twisting the dampers and rollbars to the perfect setting, but what it arrived with was perfect for the UK roads – better than the GT-R long-termer we ran.

There is also a shedload of grip… in the dry. We had the car in during a very rare UK heatwave that saw temps rise to 39 degrees and the Cup 2 tyres turn to Black Tac. Even with all the systems off, the Pro could deploy all of its power without a loss of traction, allowing for a 0-100kph time of 3.6 seconds, and a top speed of 319kph if we had the space to run on and time in our diary for a stint in prison. This insane grip, plus the quicker, more communicative steering than a standard GT, plus the four-wheel-steer equate to a far more agile and placeable car than you’d expect from something as wide as a skip and long as a narrowboat.

How does it compare to the competition?
Even though the GT-R Pro goes into battle with the likes of the Porsche GT3 RS and McLaren 600LT, it really is in a class of its own as its layout, engine and general thuggish sensibility is completely different to the competition. The engine still dominates proceedings, thumping away up front with an incredible slug of torque to settle into and use the grip. Otherwise, you can feast on the manic responsiveness from the ‘Hot-V’ and live in the rev range’s upper echelons and keep thwapping your way through the slick seven-speed. But the Pro also brings updated interor hardware from the AMG GT 4-Door Coupé. So you get a 12.3-inch instrument cluster and a 10.25-inch multimedia display plus a new, fussier steering wheel with more buttons and knobs plus a beefy stereo, so it’s far from Guantanamo on a long schlep.

But is it worth the £40,000 price hike over a GT-R? Well, you get a lot of goodies and tech for that. But you also get more on-road comfort and better performance on track. Plus those green stripes. So if you add all those things up, yes it probably is worth it. Especially as it’s one of the angriest looking things on the road. 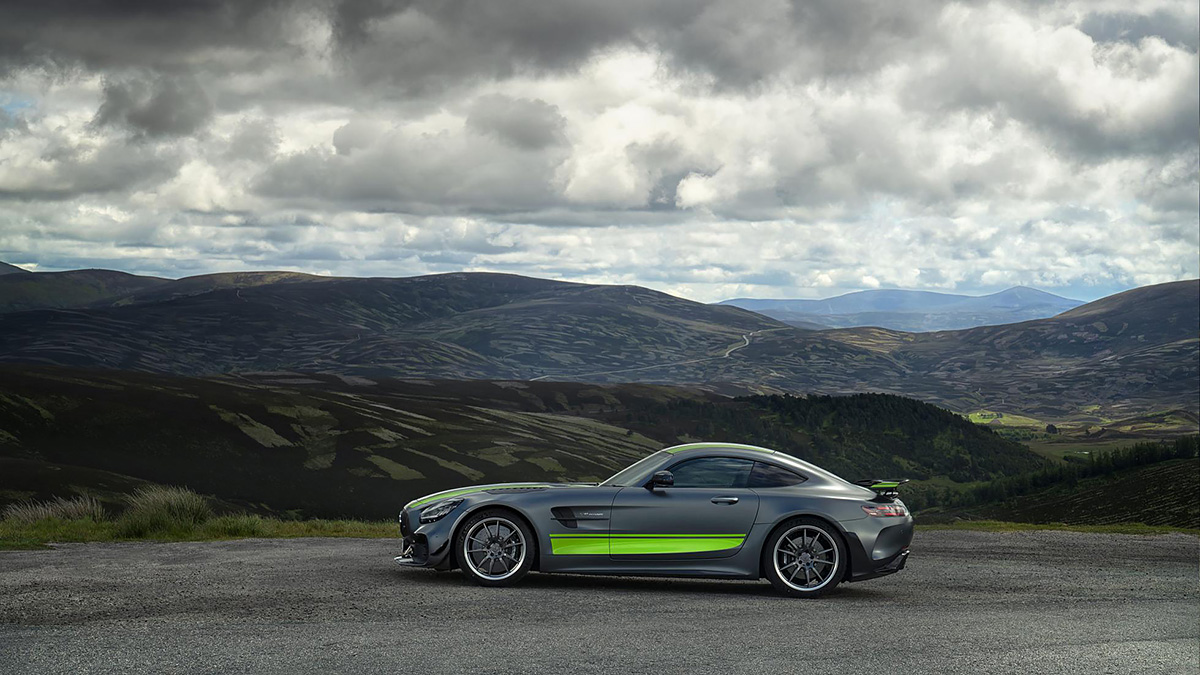 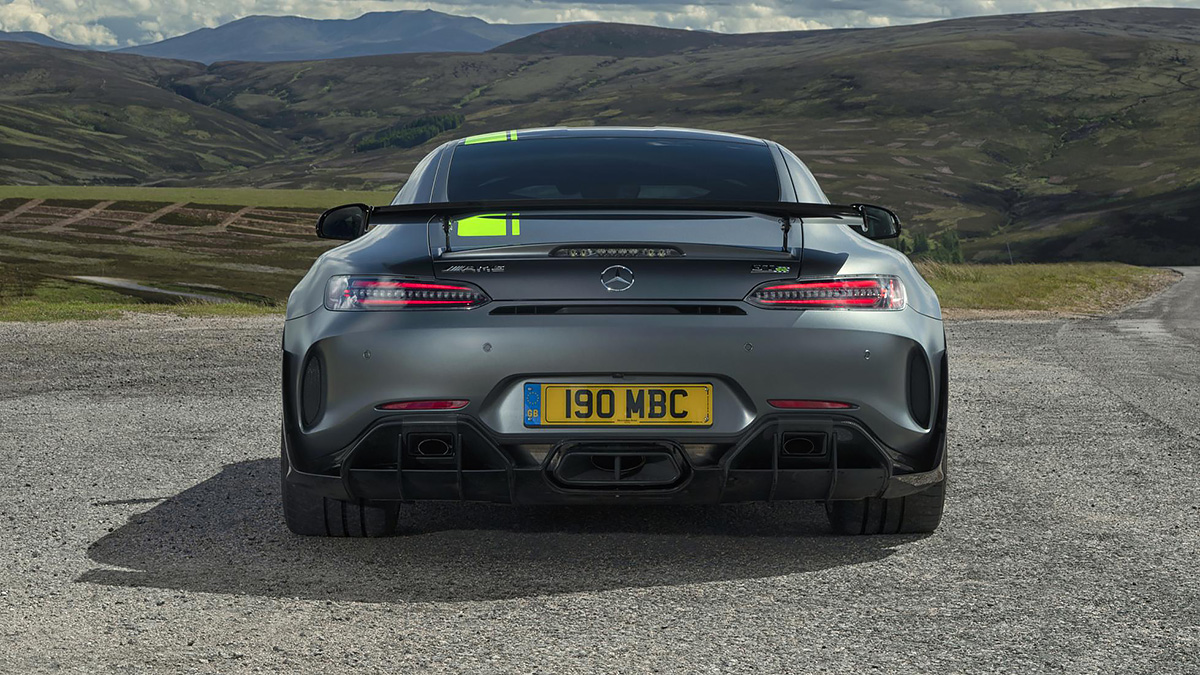 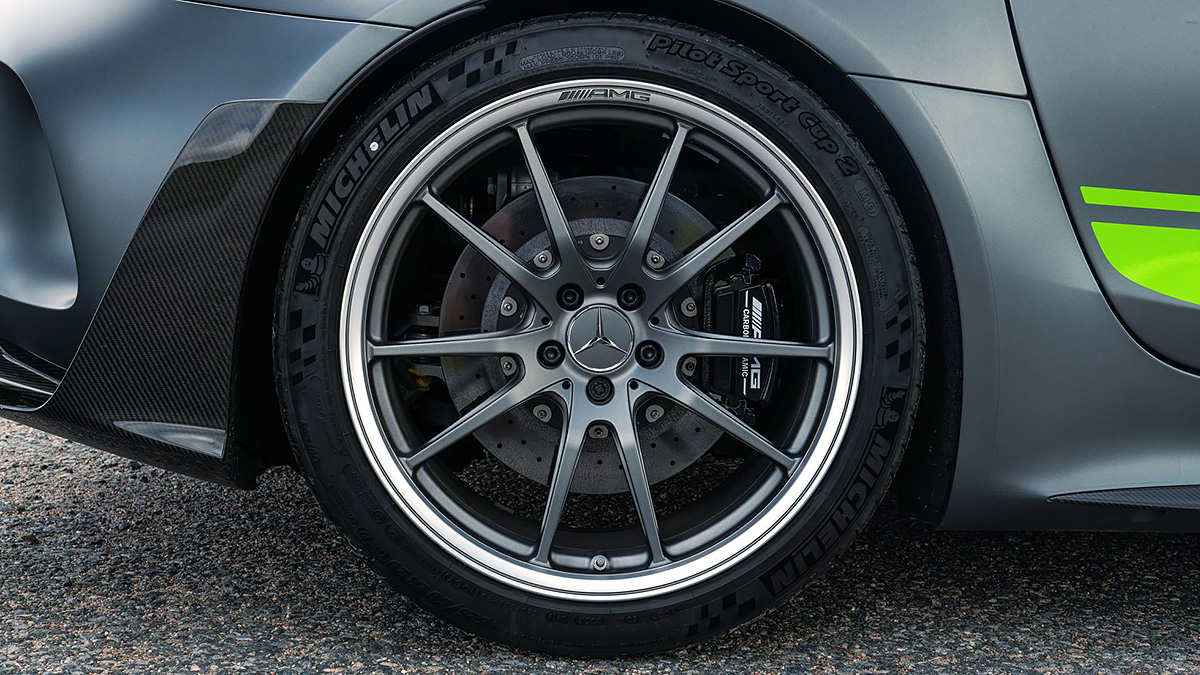 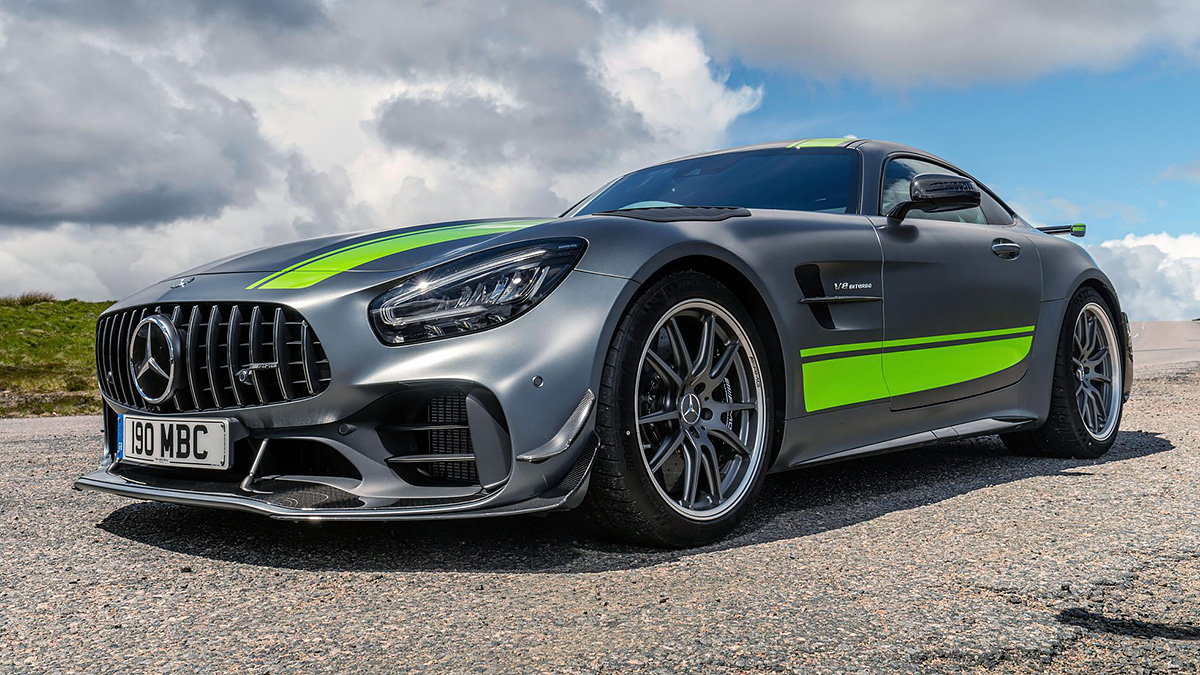 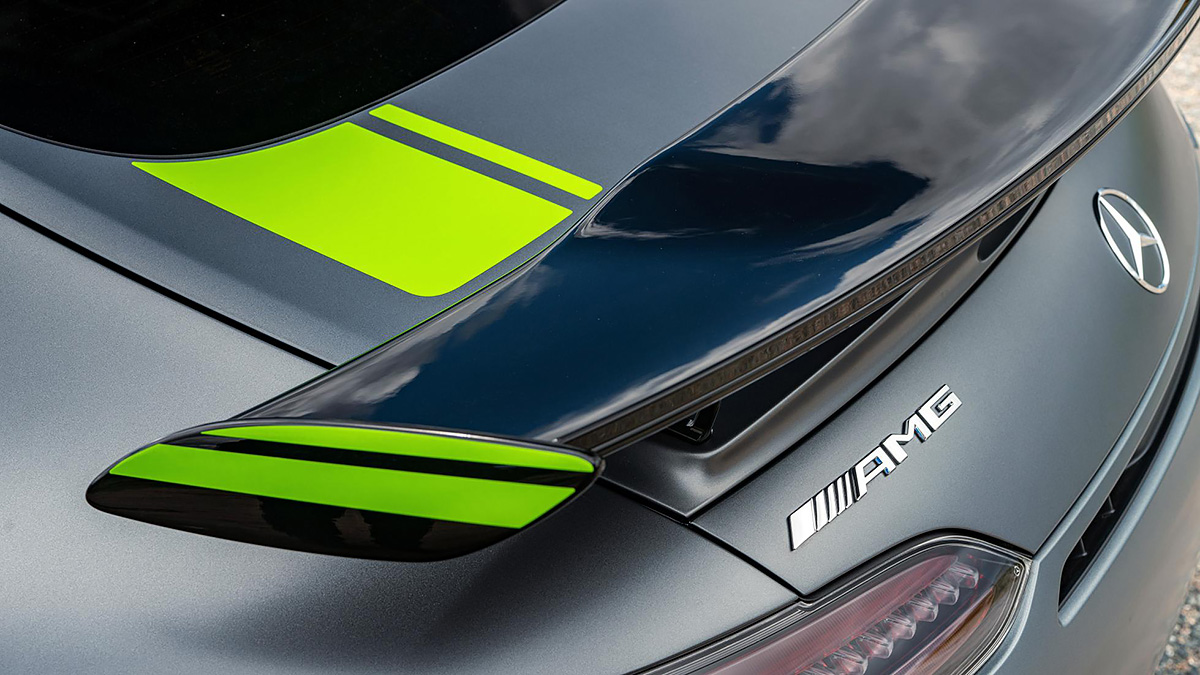 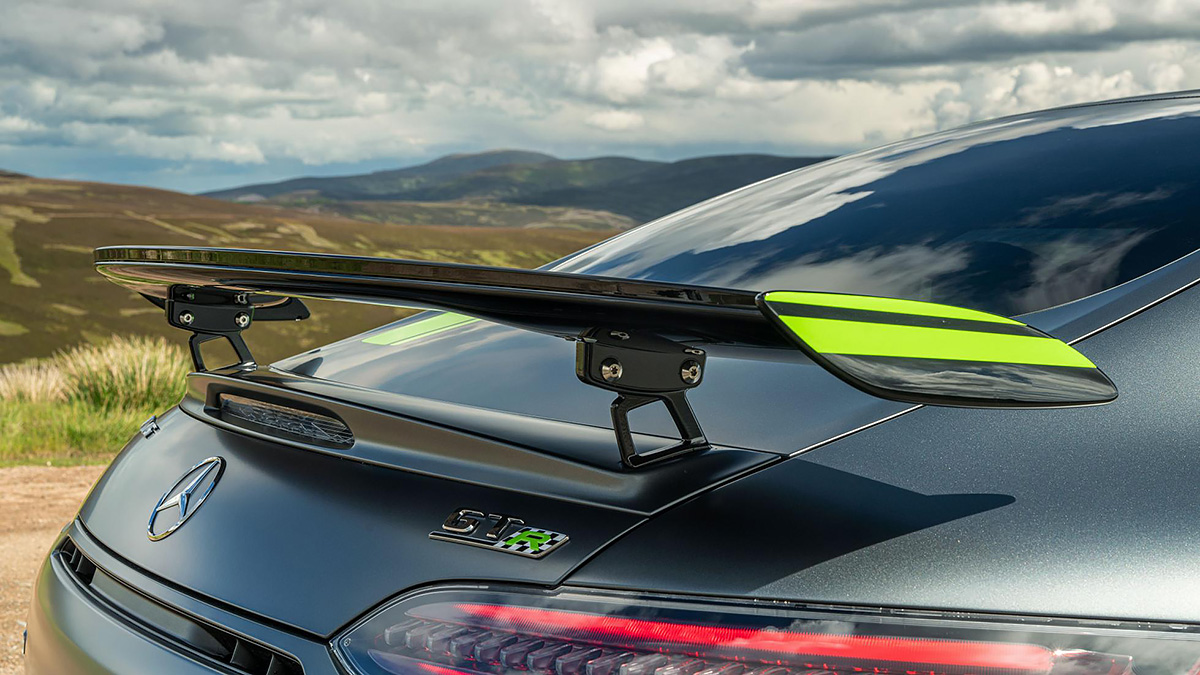 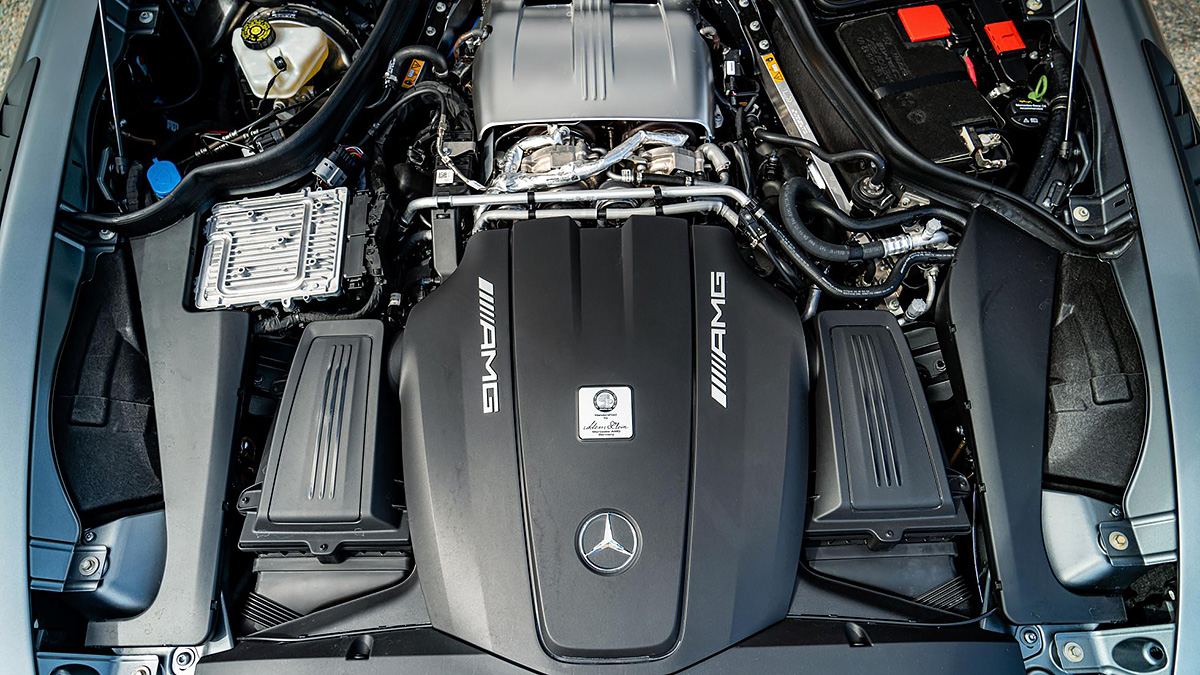 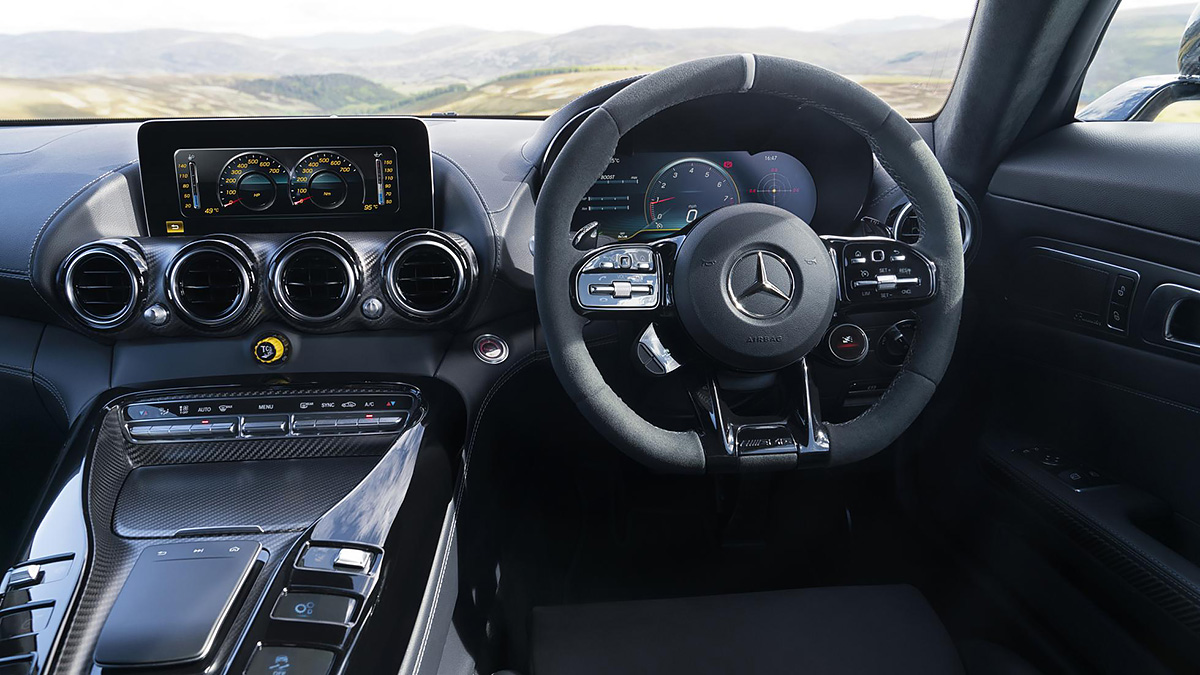 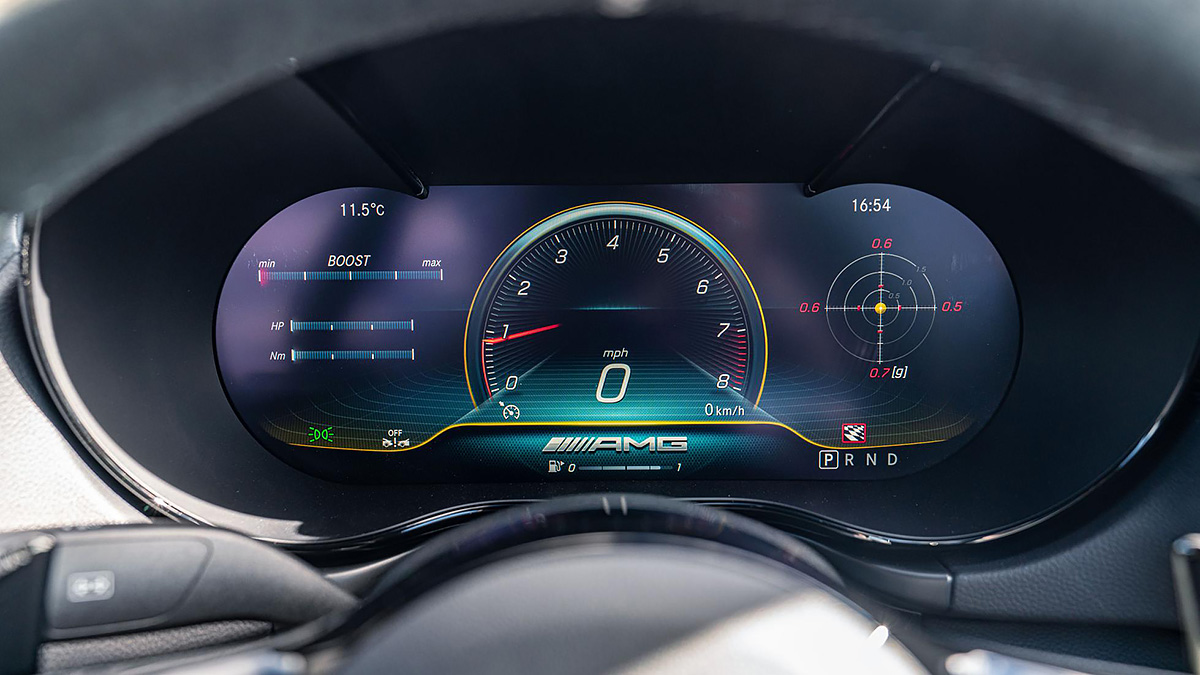 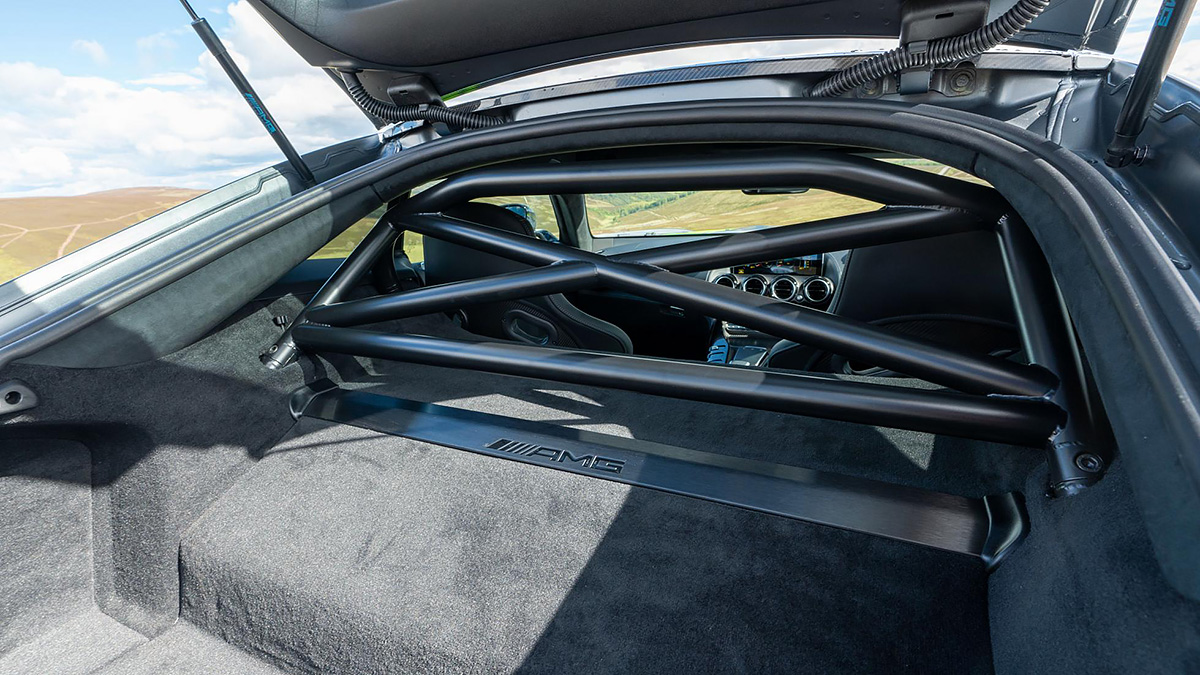 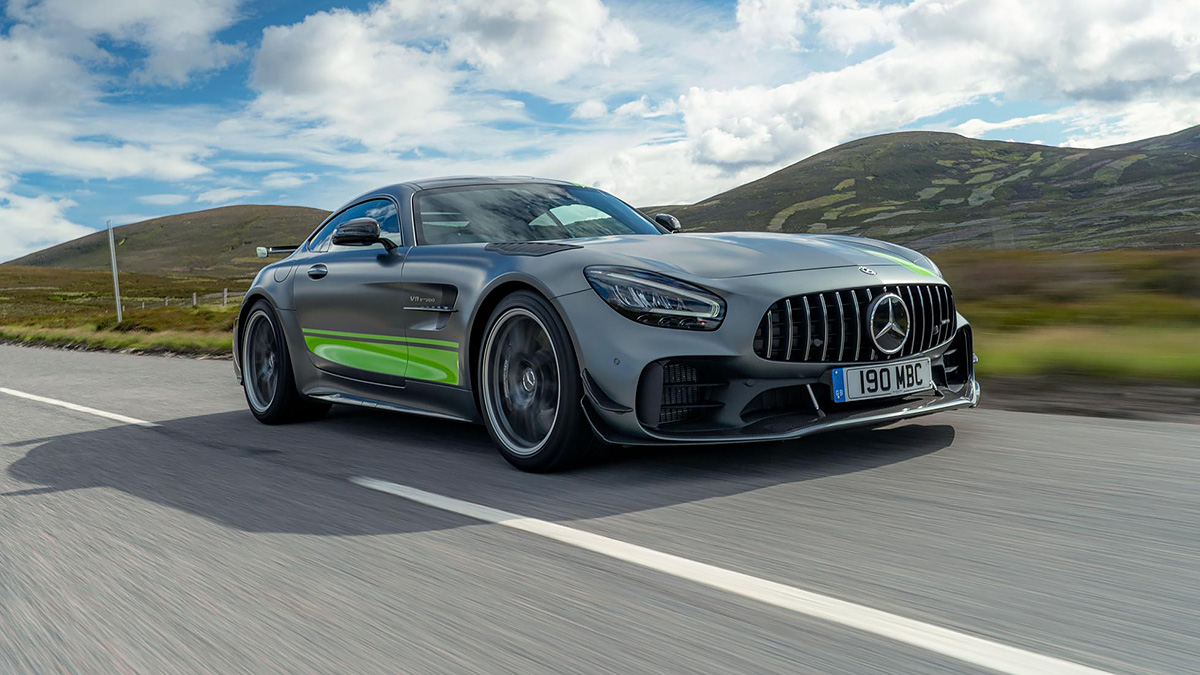 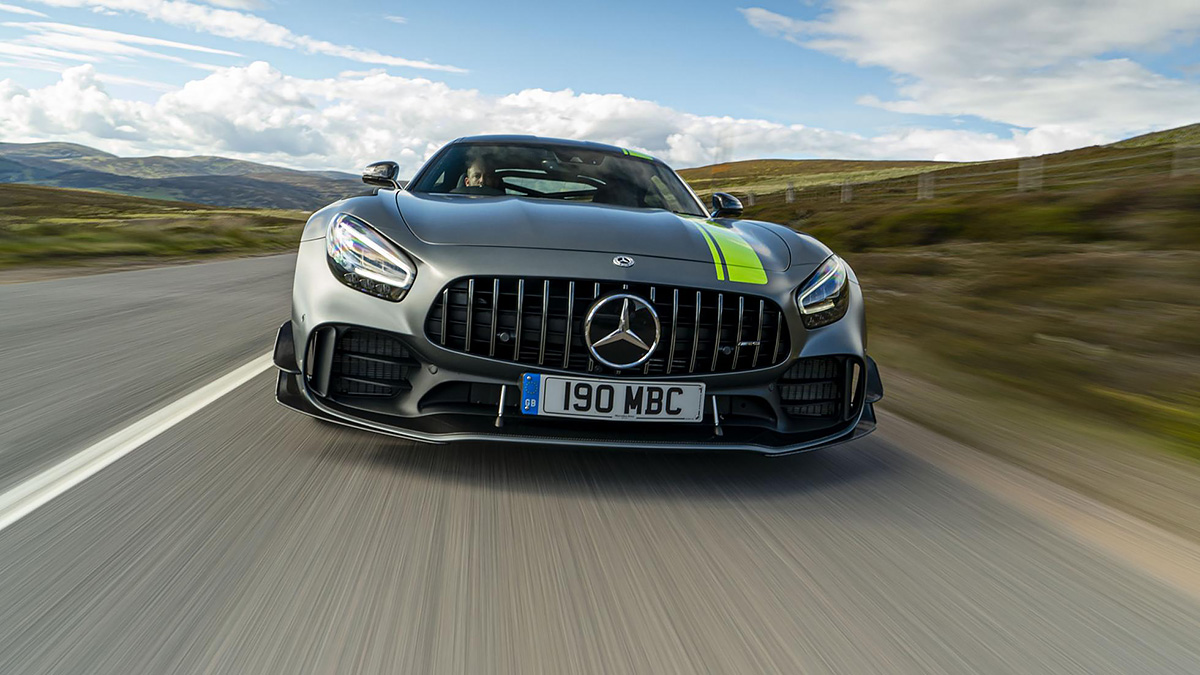 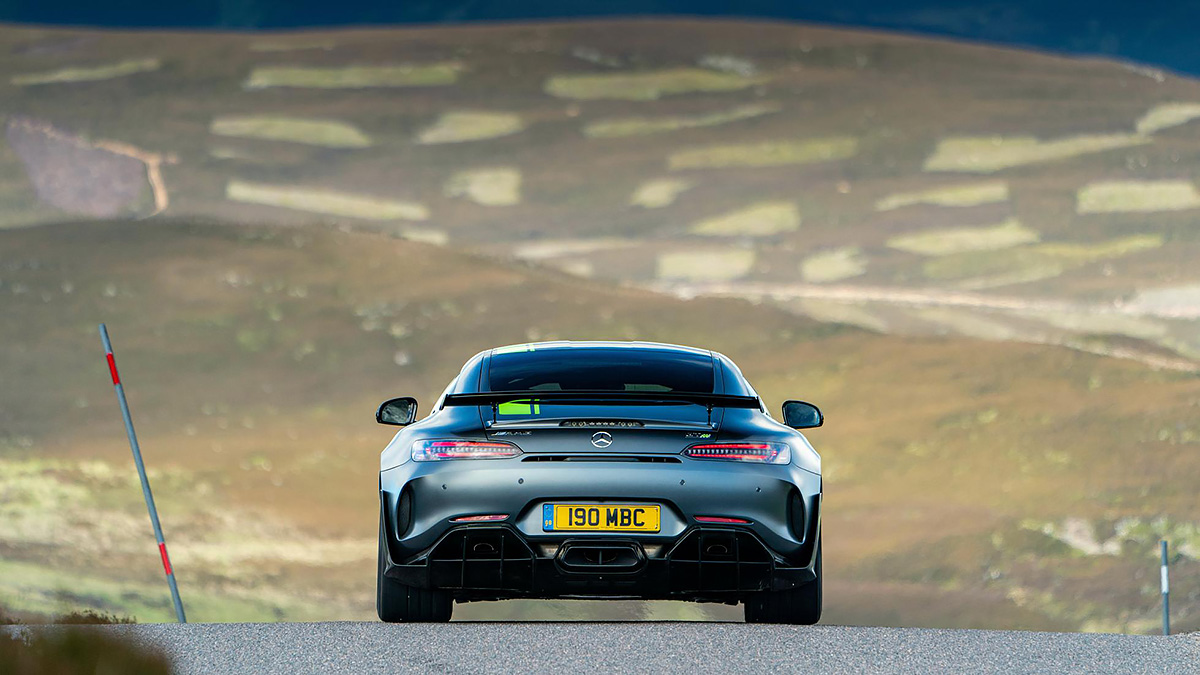 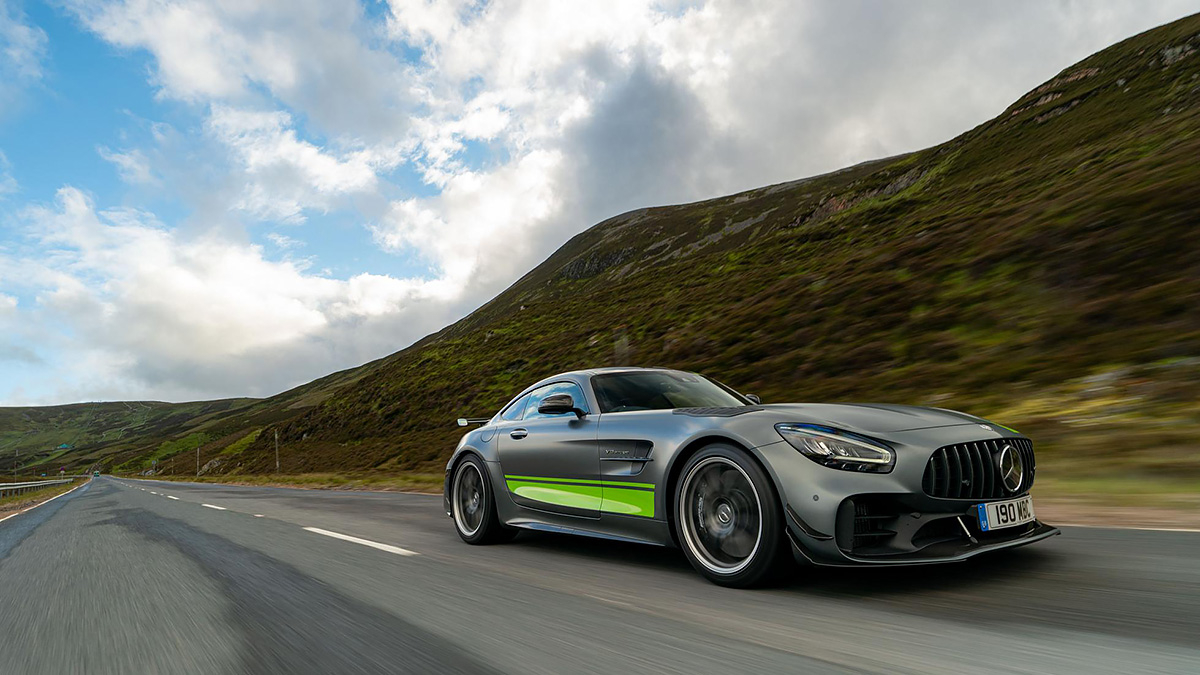 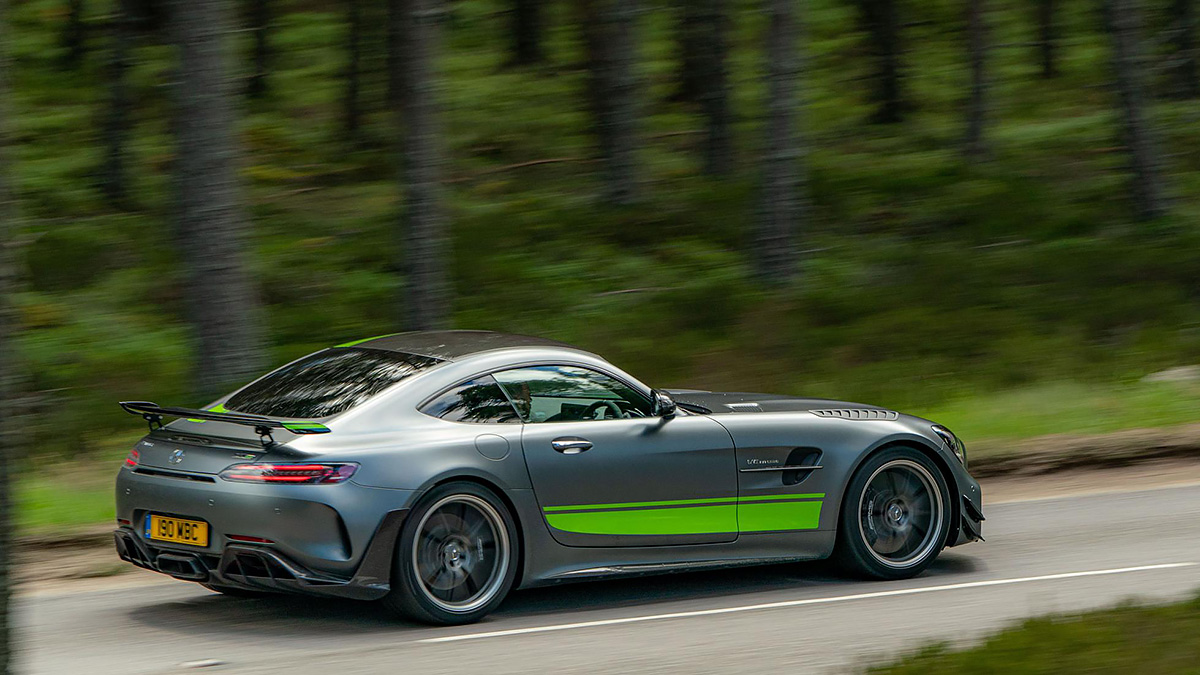 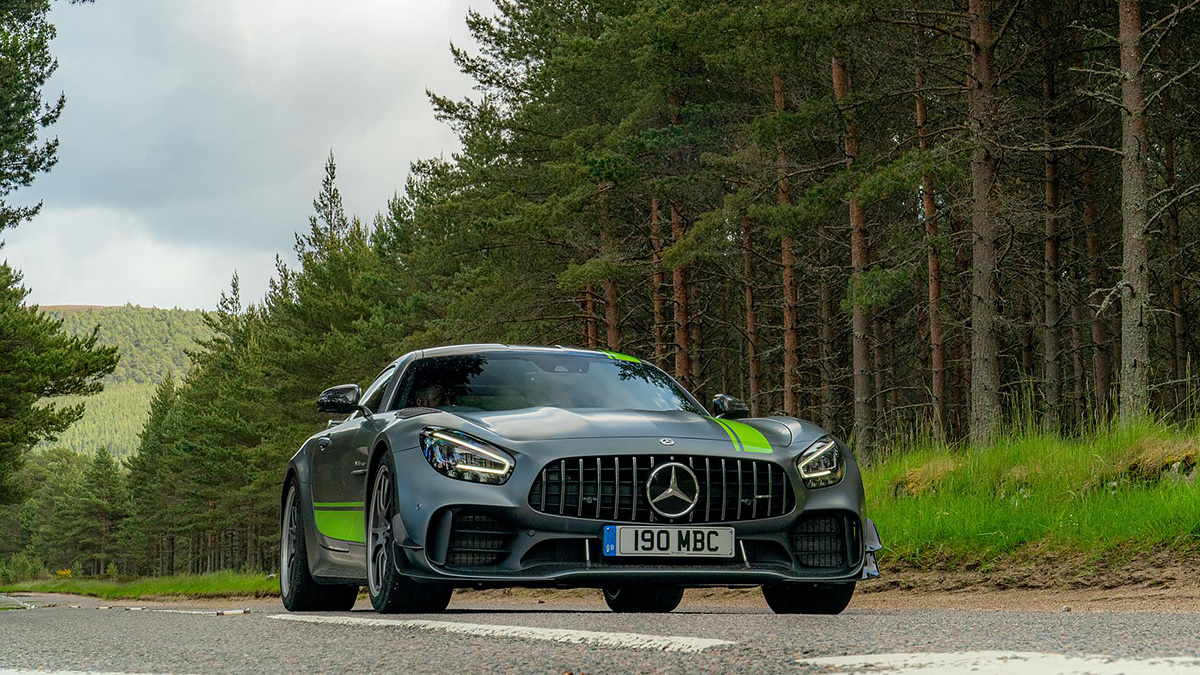 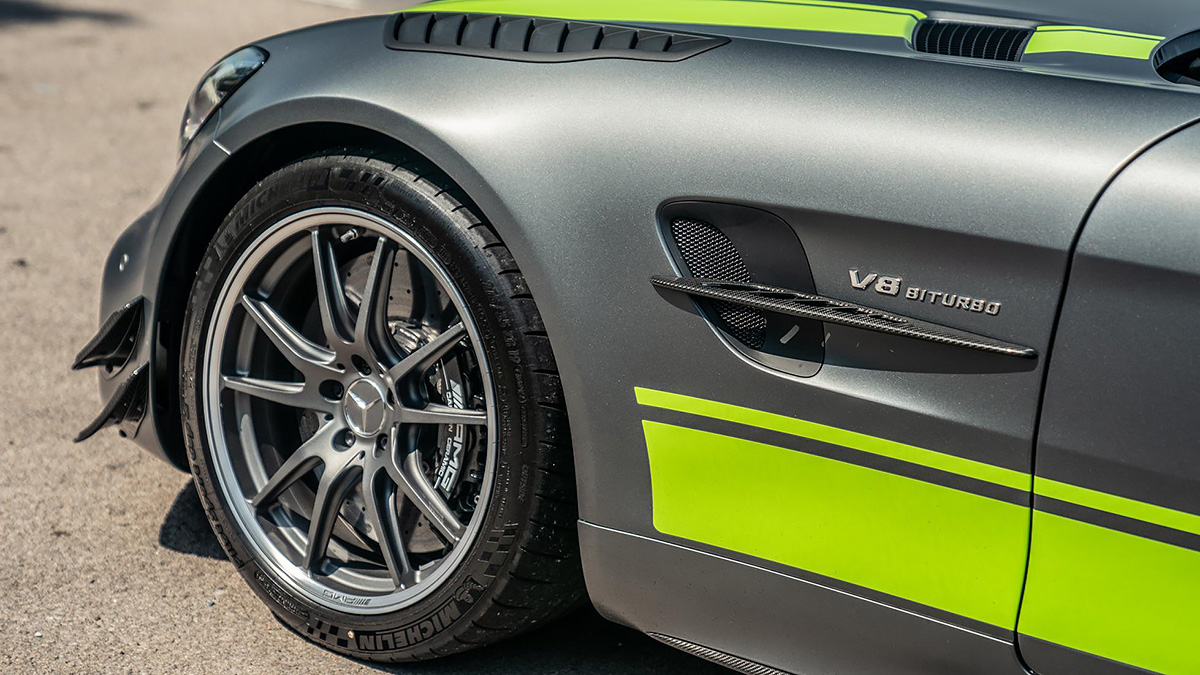 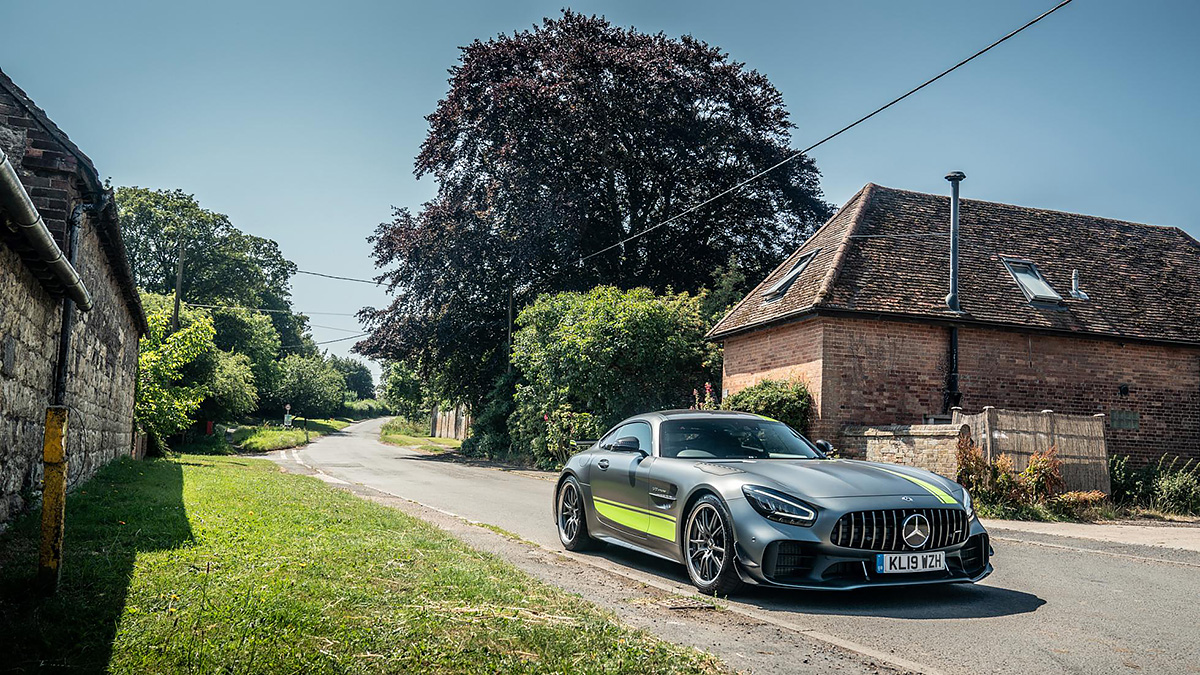 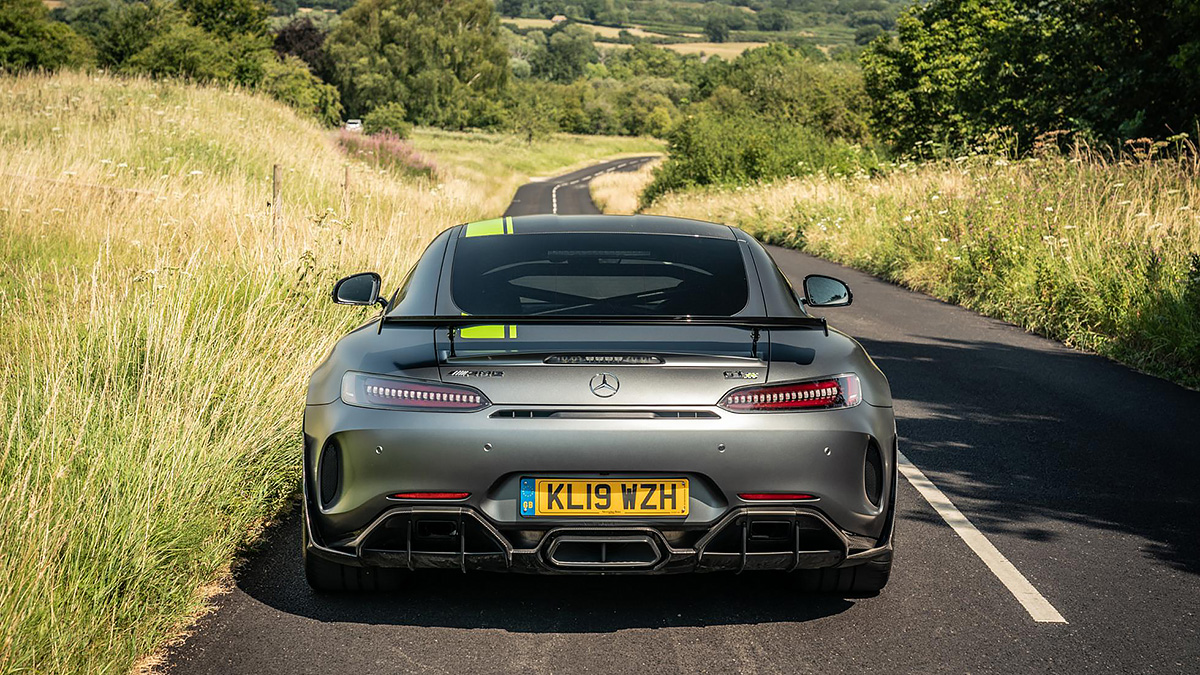