McLaren GT Review: is it really an Aston Martin rival?

OVERVIEW – What Is It?
It’s a McLaren all right, but the aim is to take the ground from underneath rivals’ front-engined GTs. So here’s the McLaren bit: mid-engined V8 turbo, twin-clutch gearbox, two-seat carbonfibre tub. But it’s roomier, more practical and more refined.

It weighs a mere 1,530kg and is endowed with 620bhp. No-one doubts a mid-engined car with those numbers is going to be far better to drive down a great twisty road than a much heavier front-engined car. But in pursuit of the practical, how much has the McLaren GT sacrificed its supercar edge? And is it practical enough to make that sacrifice (however big or small) worthwhile? 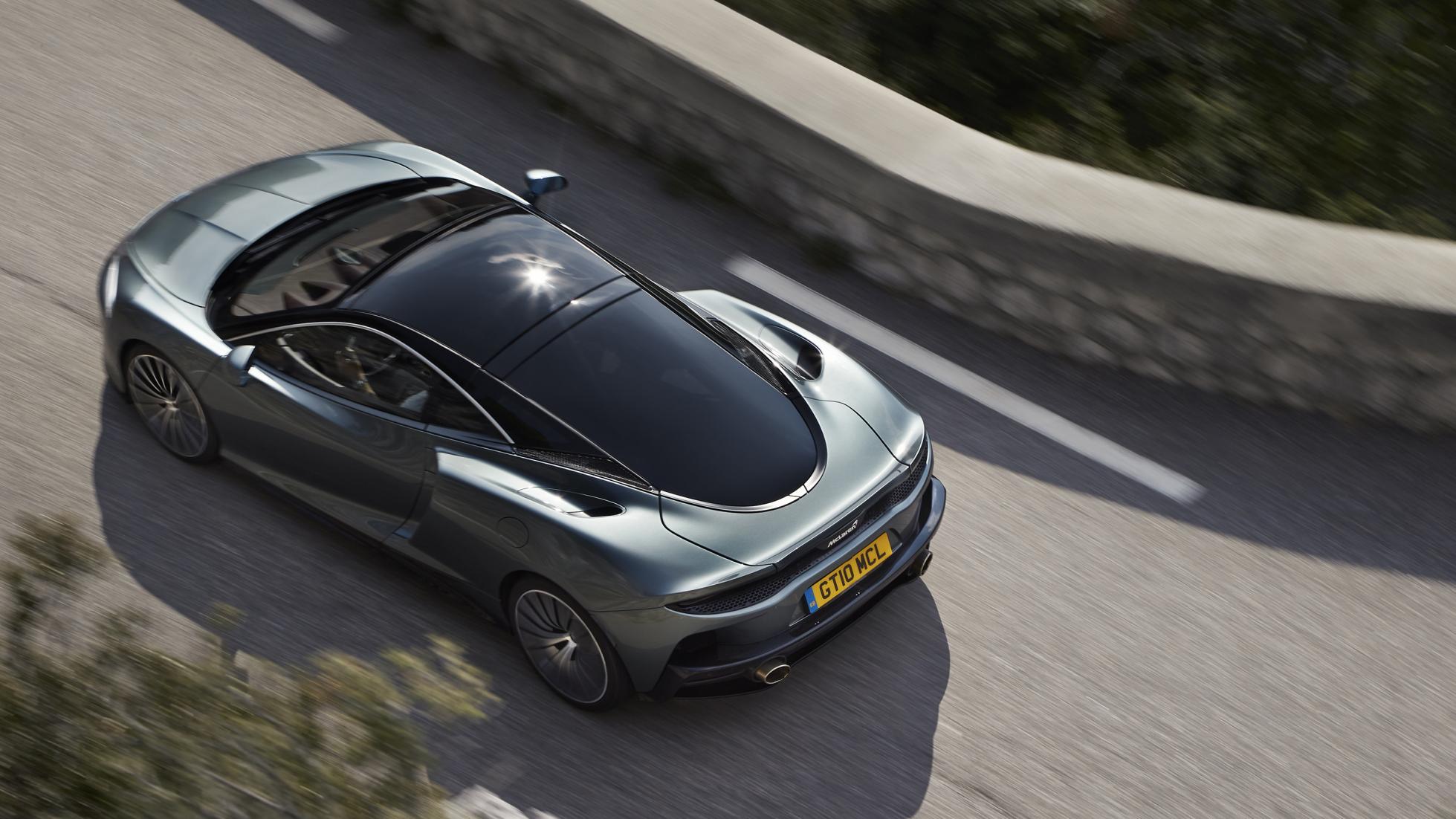 That’s what we’re here to find out. McLaren has made the effort. More than two-thirds of the parts are new.

The engine, a four-litre job like in the 720S, has smaller turbos and entirely redesigned plumbing compared to other McLarens. As we’ll see, that brings a more appropriate power delivery, but it also makes the engine physically less tall.

That in turn means room above it for a surprisingly big boot under a glassy tailgate. It can swallow a bag of golf clubs, if that’s your thing. Or two sets of skis or a guitar. And careful insulation and cool-air ducting means they won’t melt. Another boot in the front can take a couple of flight bags, so in all it’s good for 570 litres.

The suspension has been recalibrated with softer front springs and careful anti-roll bar tuning to compensate. Yes, it has anti-roll bars, like the 570 series, rather than hydraulic adaptive anti-roll like the 720S. The damping is adaptive and the steering hydraulic in true McLaren fashion.

The cab is more luxuriously trimmed and quiet. The GT has also got decent ground clearance and well-behaved motorway manners, and good visibility, and tyres that work well in the wet.

Although it’s longer than nearly all other McLarens, it’s not as aggressive-looking. Or sounding. It won’t wake the dead.

By the way, the GT sits alongside the 570S and 720S ranges, as McLaren aims to fish for new customers rather than just making a substitute car for the existing lot. 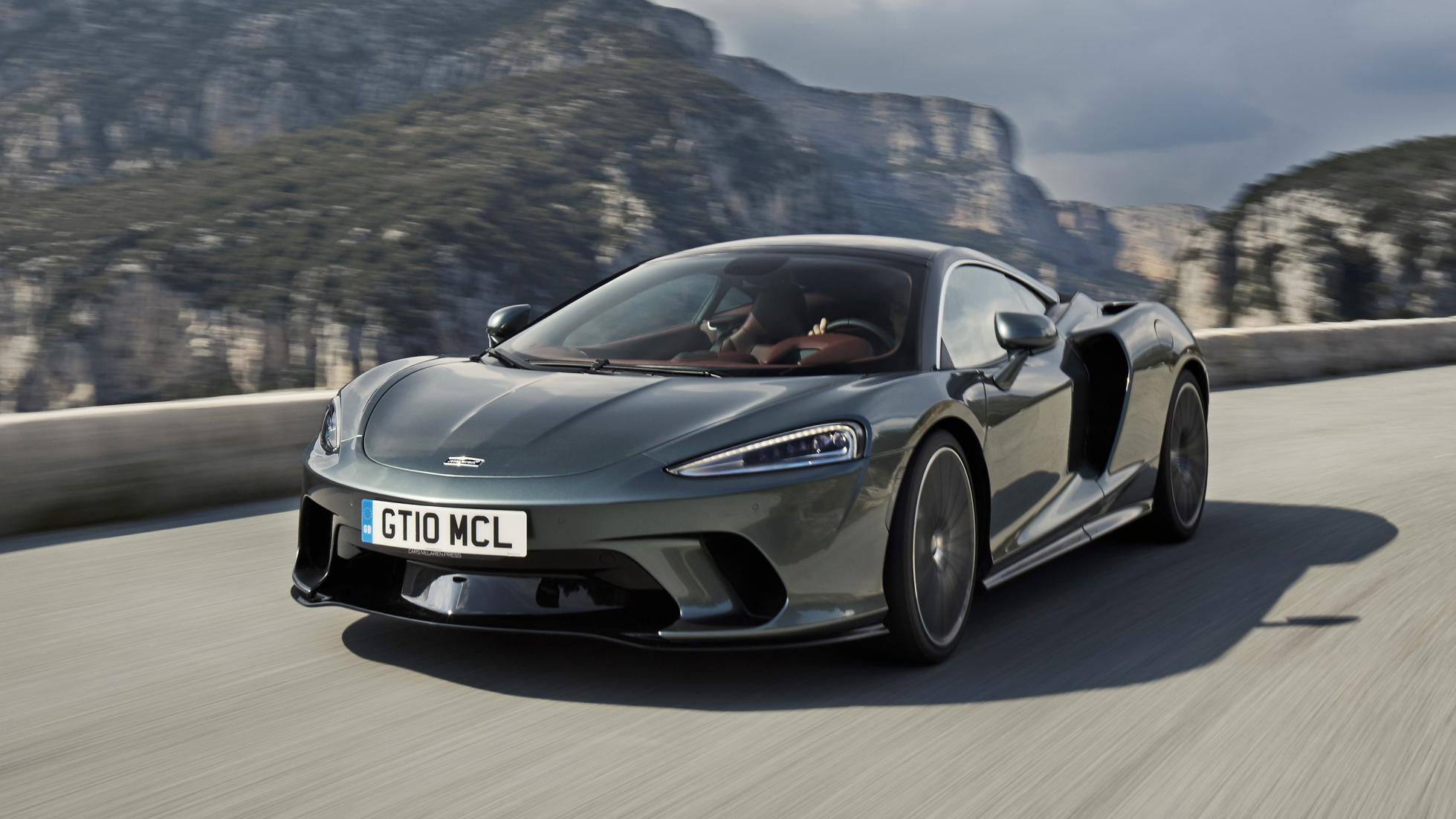 DRIVING – What is it like on the road?
Some of the front-engined GTs in this world do drive well. But they seldom feel like anything more than sharper, faster saloon cars. Different in degree, but not nature.

The McLaren GT turns and rides as a mid-engined supercar does. This, not the prodigious speed, is what makes it different from any of the above. 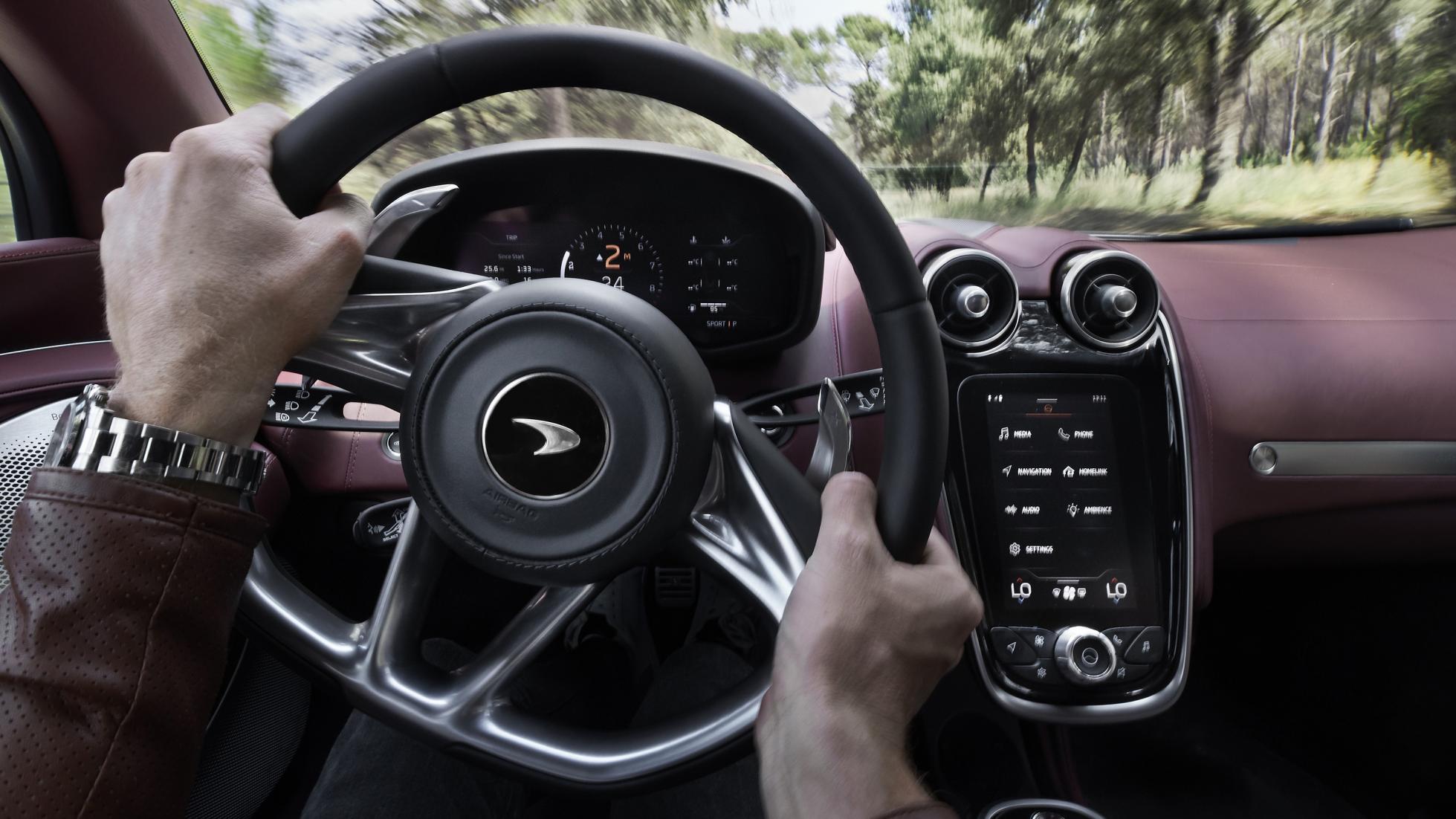 It’s agile, turns flat through corners, doesn’t incline to understeer, gets its power down zealously. True, the softer front springs mean there’s a fraction more delay in the turn-in than say a 570S. A fraction.

But once in a bend you notice the gorgeous steering – surely as good as any powered system anywhere today. Your turning angle builds progressively and the wheel rim’s ever-animated, transparent about every bump and dip and change in grip. The whole car holds itself in perfect balance, letting all four tyres share the work, pivoting around your hips.

Yet the ride is superb, especially in the softer damper setting. It doesn’t crash into sharp bumps or vibrate or shudder on the corrugations. It cushions – better than most saloons. It filters the road while telling you what you want to know. It’s even pretty low on tyre noise. Yet at speed it quashes pitch and heave.

And even though the GT is so eager through bends, the steering has a nice heft just off-centre and isn’t too high-geared or nervous.

Revised suspension geometry also adds stability. So it’s an easy car to guide down a motorway lane, and through gentle A-road curves. This, with the level ride, helps make this a terrific chassis for long hauls as well as backroad blasts.

The engine asks for a pact, giving its best only if you’re paying attention. Dribbling along behind a truck you’ll find the transmission, if in auto, endlessly upshifting, dropping revs to a place where the V8 is just an unresponsive drone. Kickdown can be messy too. 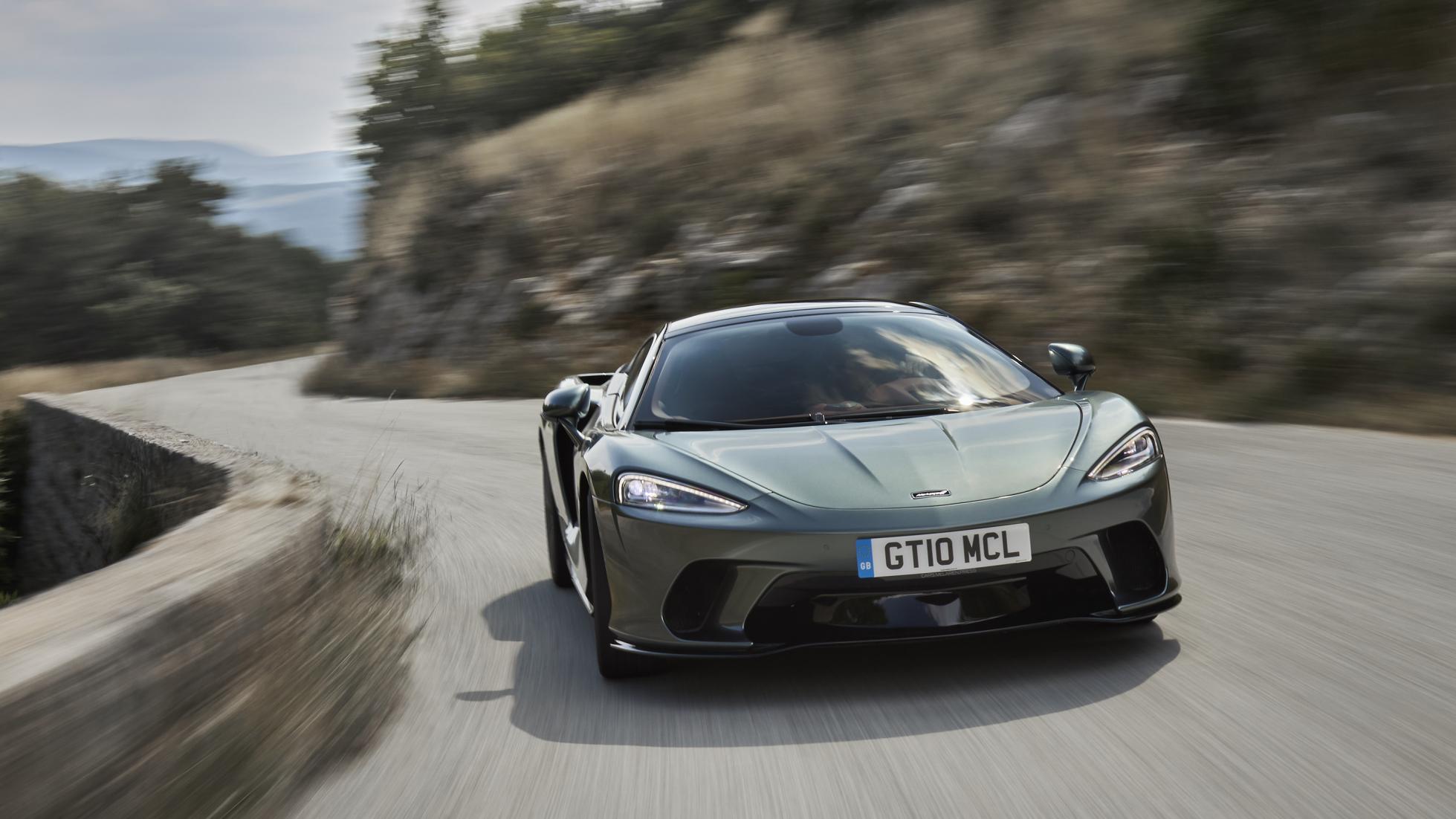 Right. Switch to manual, use the solid metal paddles, and go in search of revs because below 2,500rpm there’s one-elephant-two of turbo lag. From 3,000 it gets serious, building and building all the way to 8,200. In that whole range it’s more progressive than the firm’s supercar engines. Above 5,000 the surge is greedy for the horizon. OK, it’s not the brain-scrambling madness of the 720S, but this just means a full-throttle event lasts longer and can be savoured the more.

Brakes, uniquely for a McLaren, are steel. The tyre grip and stability allow lots of stopping force, but the pedal isn’t as confident or as fade-proof as with McLaren’s carbon ceramics. They’re an option.

Now, while the McLaren part of the name says it’s a car for drivers, the GT part of the name says it’s going to spend time passing between average-speed limits and stuck on long motorway hauls, and driving at night. For those jobs, people will want adaptive cruise control, blind-spot monitoring and adaptive emergency braking. Maybe lane-departure warning and matrix LED headlights. This GT can’t provide any of them. 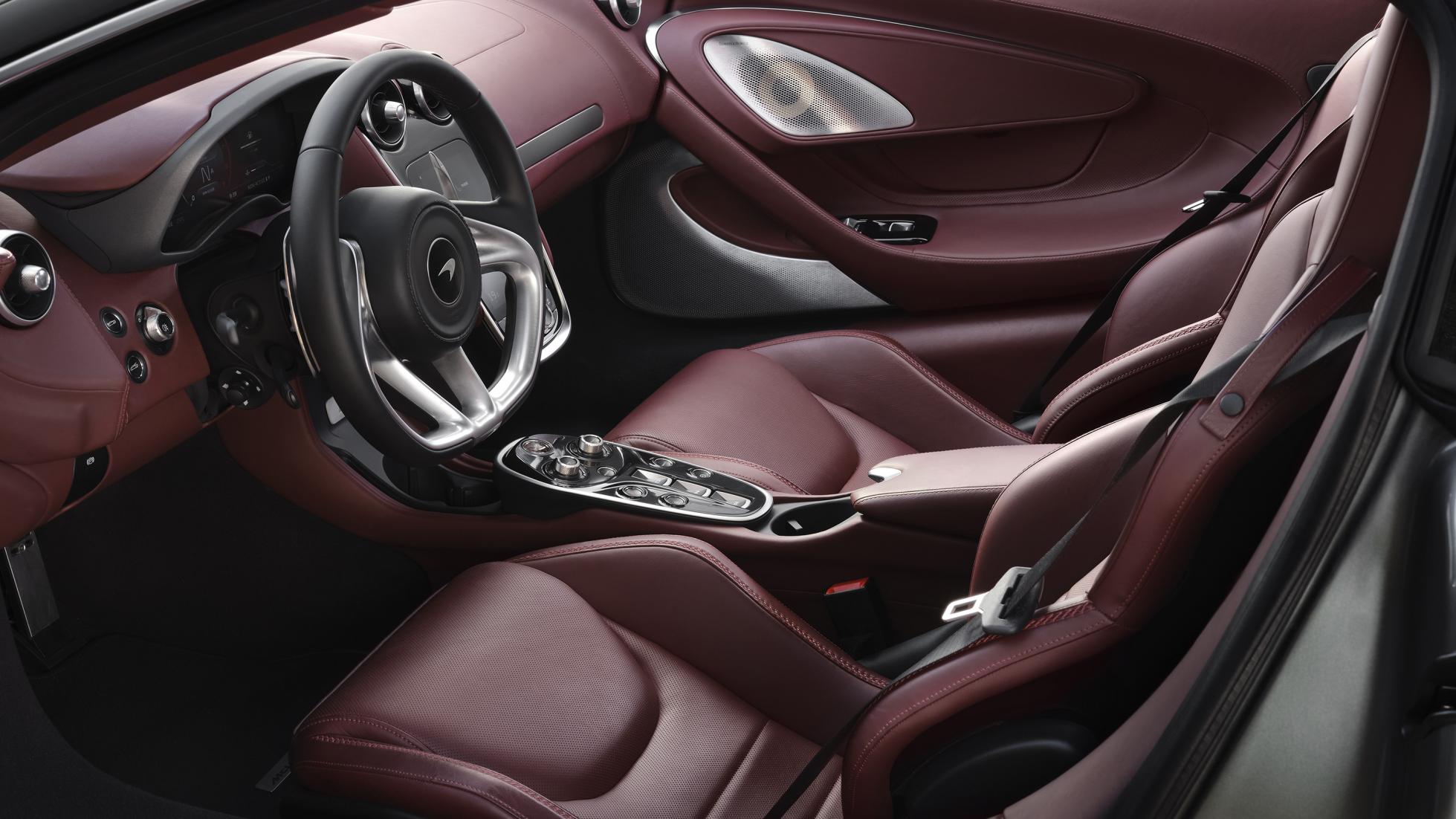 ON THE INSIDE - Layout, finish and space
McLaren has stuck to its dramatic wing doors, but the seat is a little higher so you don’t have such an awkward drop to get in. And the door power-closes the last few millimetres. Then you’re in a sports-shaped seat with power adjustments, in more directions than a supercar but fewer than a German luxo-GT. The steering column is powered too. If your shoulder blades are wide, the seat will cramp them.

The cabin trim is lovely, and customisable in lots of materials and beautiful stitch patterns. The switchgear is all metal, and everything feels expensive and is unique to McLaren.

The firm has designed a new infotainment system, with far more powerful processors, and it uses industry-standard mapping and traffic detail. You can spec a lightweight Bowers & Wilkins hi-fi. The vertical touchscreen suits the narrow centre console, and it has some useful shortcut buttons. But also some odd omissions: none of the company reps could show me how to switch to a permanent 2D map instead of bird view, so if it is possible then the menus aren’t clear enough.

Because it’s a narrow cabin, the centre console doesn’t have much storage space beyond a narrow armrest box and cupholders, and small glovebox and a little net. The wing doors don’t have pockets either. So overall there isn’t much room for the general gubbins that accompanies you on a journey.

Looking forwards and over the shoulder, the view out is terrific. But not so good backwards, so you need the reversing camera, especially when the rear boot is full. It feels very airy in the cabin, especially with the switchable electrochromic glass roof on its clear setting.

Now, the boot. Yes, it’s far, far bigger in total than anything in a normal GT. But the deepest part is just behind the seats, so you either have to reach in over the bodywork or squeeze behind the flopped-forward seats.And even though there are nets and tie-downs, they won’t stop small objects careering forward when you brake – flying ski-pole anyone? Or even tins from the shopping run. Best put that stuff in the front boot.

Still, to be fair, the rivals have pretty tiny rear boots so you have to put stuff on their otherwise useless back seats. 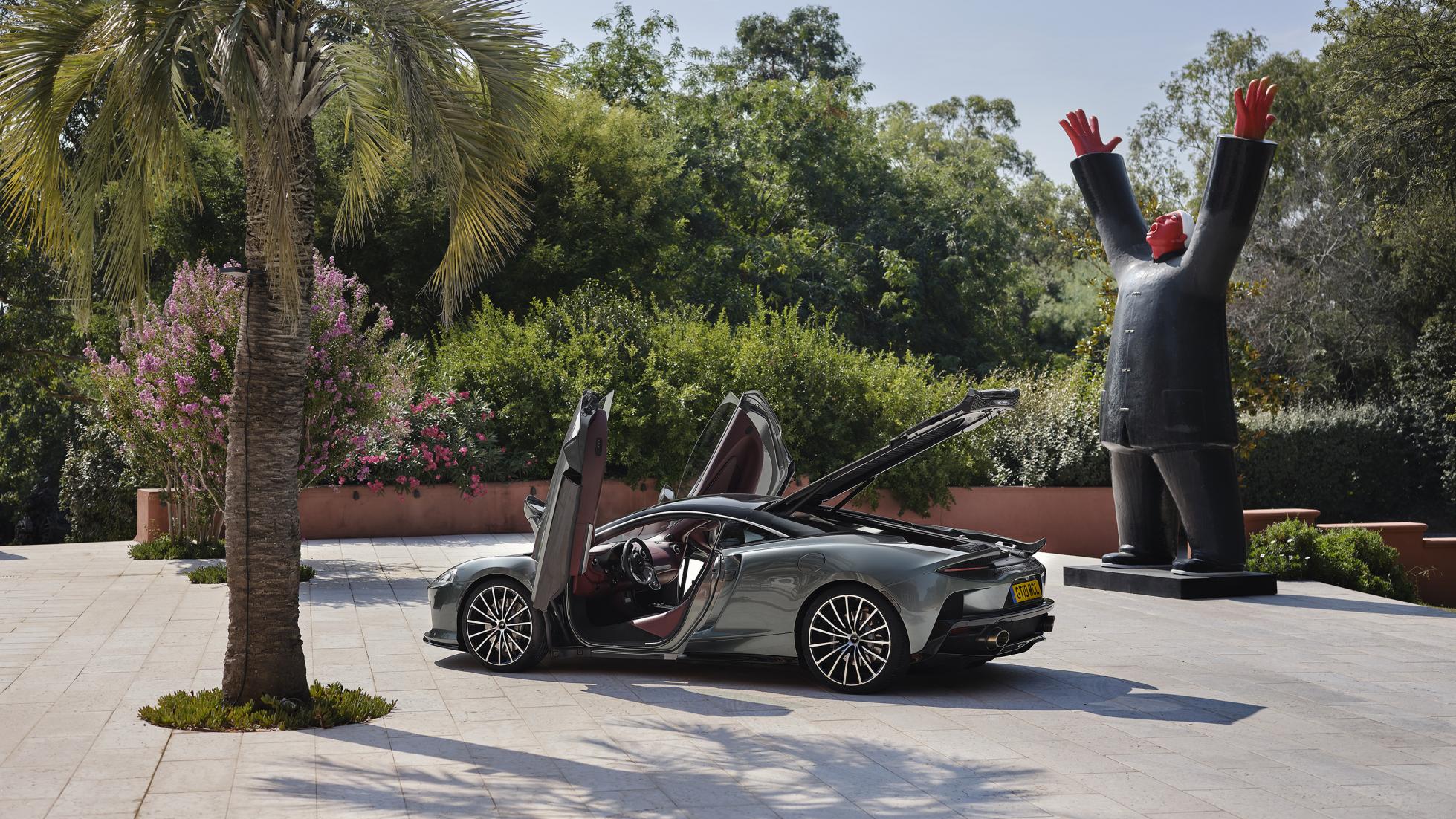 OWNING – Running costs and reliability
It comes with a three-year warranty, and you can option that all the way out to 12 years. Service intervals are 10,000 miles. See, it’s sensible.

But not cheap. The £163k starting price sounds good given the performance, but of course you can start adding spec, bundled into packs. A lot of what we’ve mentioned in the test (powered seats, B&W stereo, electrochromic roof, luggage retention, machined aluminium cabin trim) falls into those options.

Beyond that comes the tempting expense of MSO customisation, which fully deserves its own ellipsis…

Fuel consumption is 23.7mpg WLTP. You might well manage that on a tour, though use it hard on a mountain pass and of course the thirst will double. The 72-litre tank is only just enough for proper GT-ing. VERDICT – Final thoughts and pick of the range
This is a really good car. The more you drive it the easier that verdict becomes. The harder question is whether it’s the answer to the grand touring question.

Remarkably, the driving experience comes close to say a 570S. Yet the refinement and ride comfort are a big step ahead. Actually, better than the front-engined GT rivals, which try to compensate for their weight by running stiff springs and sharp damping and very noisy tyres.

But the mid-engined layout does impose its own compromises. The cabin is too cramped, not so much for the people but for objects. And the load space, although big, demands you pack it thoughtfully.

In the end then this is a compromised GT. But the thing is, so are all the rivals, albeit for different reasons. Small wonder the cars most rich people really use for long trips are SUVs. But for people who love driving, this McLaren will do the GT job like nothing else.

It drives like a McLaren sports car should, but a GT should probably be more practical 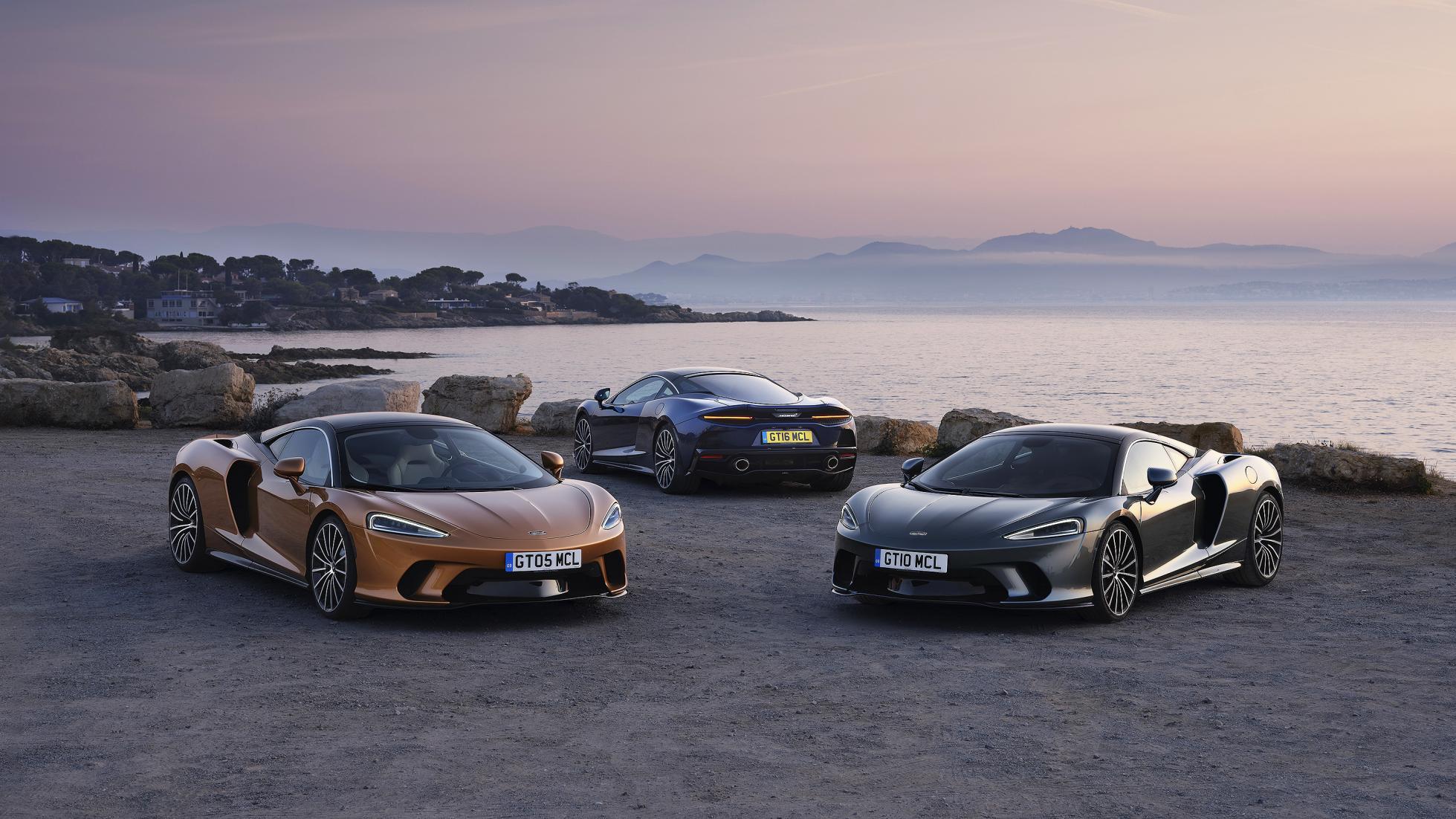 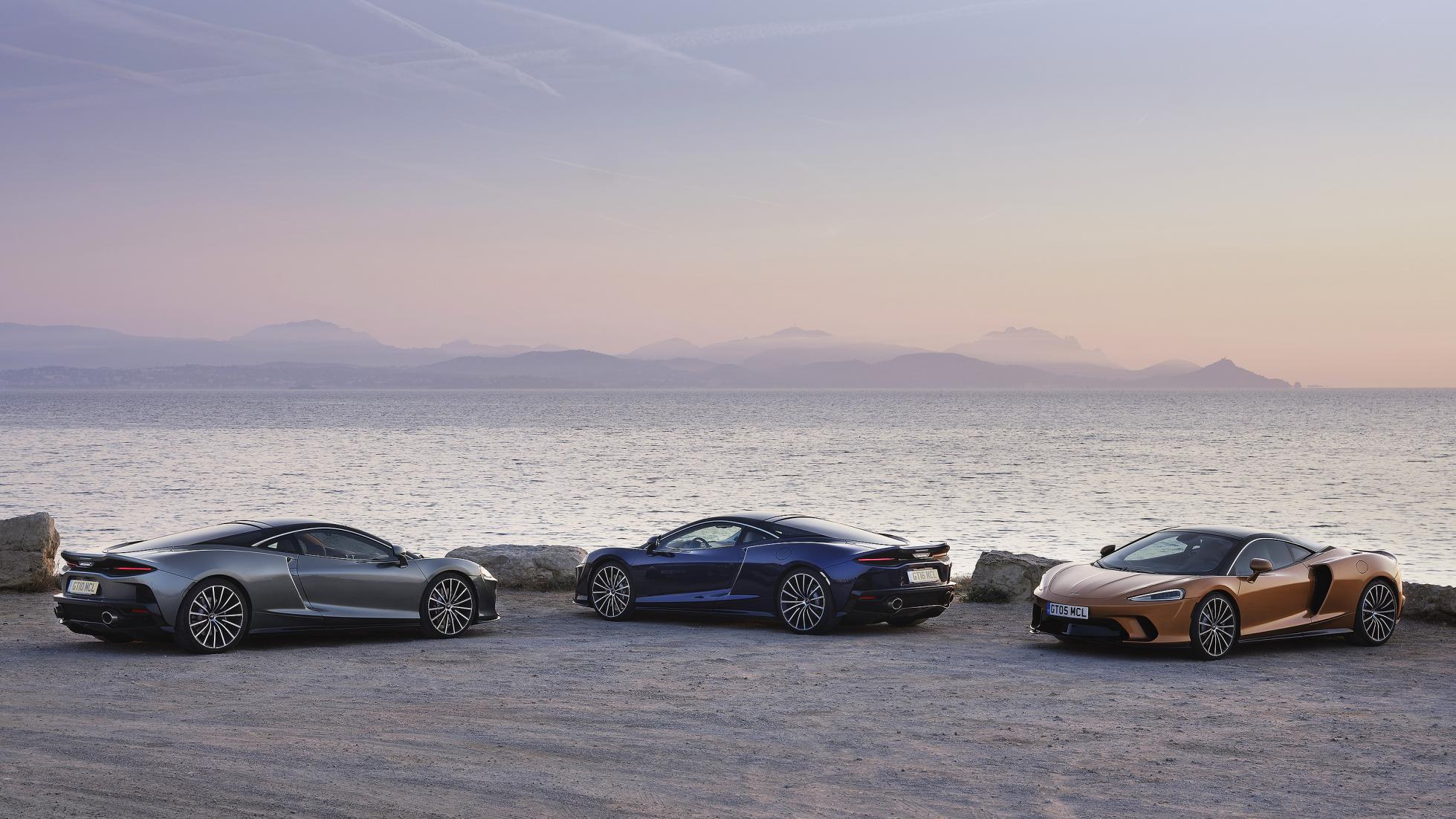 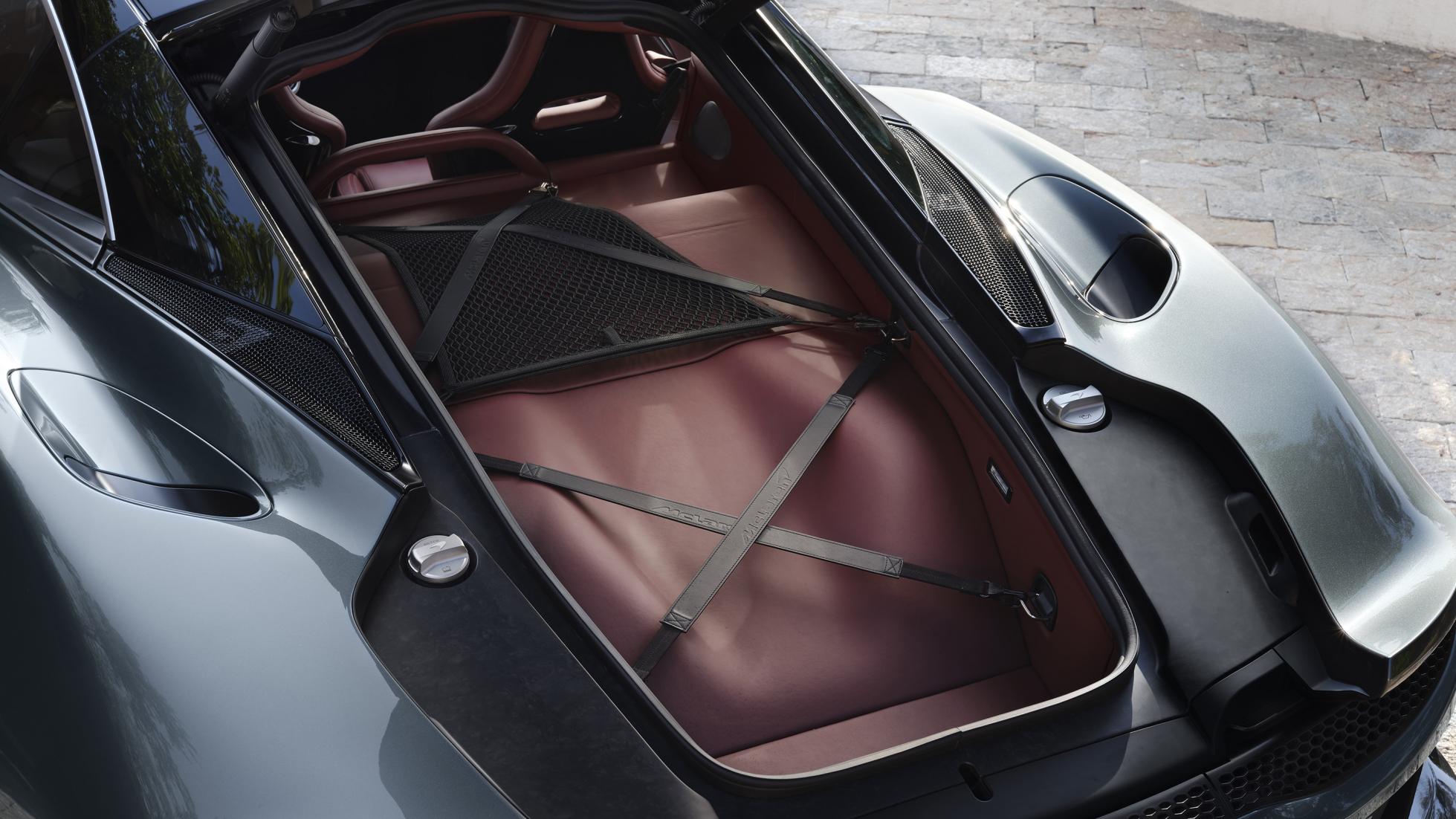 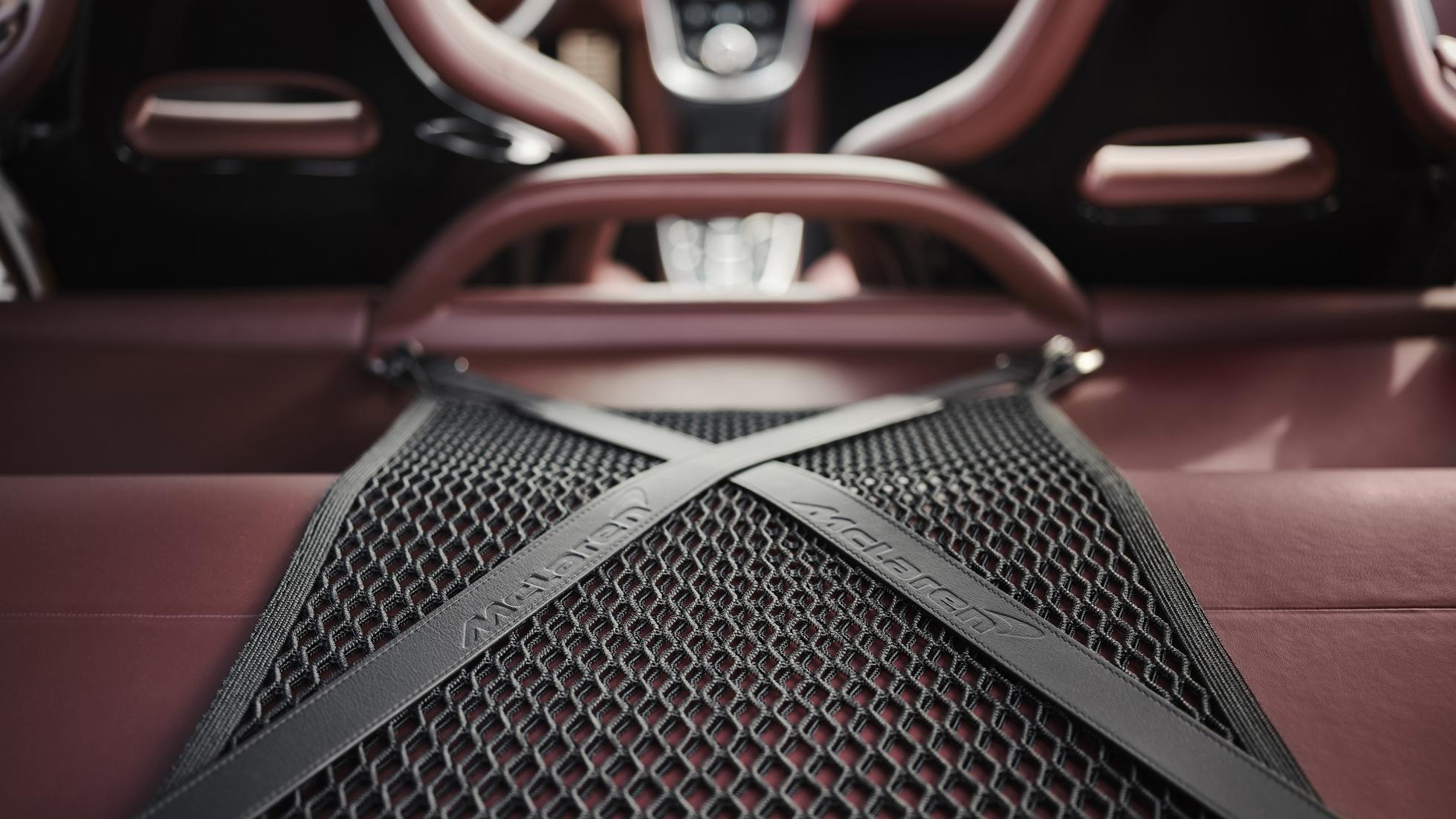