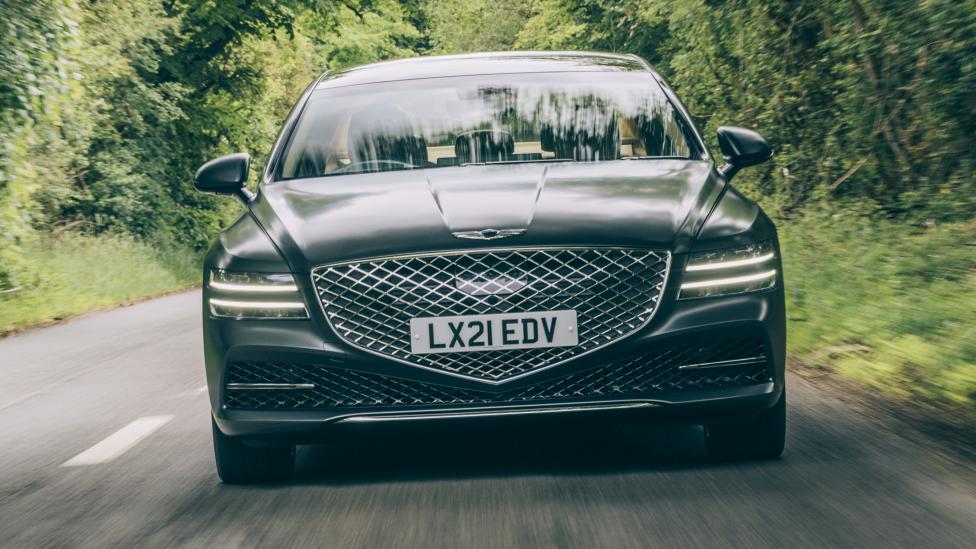 Genesis is Hyundai’s luxury diffusion line, a well-known quantity in its home market and the US, now tilting at the establishment in the UK and Europe. Many have tried and indeed are still trying, but Hyundai’s top brass see it as a matter of honour to lock swords with the big players. And they want to do it by being different. (Differentiation joins experiential as one of 2021’s key luxury buzzwords.) Last year, Genesis shifted 130,000 cars globally so the ambition is certainly not being thwarted.

It’s also possible this could be a car review in which we don’t actually review the car at all. Seriously, it’s moot how much the actual drive matters in the grand scheme of things. A large sedan and SUV are the traditional pathways to showroom glory, and it’s with examples of each that Genesis is opening its account. Key here is the fact that the company disavows the conventional retail model and is prioritising customer service above shiny-suited commission-incentivised salesperson patter.

So there are no showrooms. Instead, Genesis plies its trade via a little-known tool called the internet and retail ‘studios’; one has just opened in London’s Westfield shopping centre, with another to follow in a dramatic new central London location next year. Genesis also allocates customers an individual personal assistant, most of whom have been recruited from non-car spheres (one is ex-Harrods). There’s a mighty five-year warranty, five-year servicing, and five-year roadside assistance package, and the car is collected and returned on covered transport.

South Korea’s rep in the world of painless consumer durables is well established but we’ve come a long way since ‘that’ll be the Daewoo’. The G80 really does do different, an imperious looking sedan whose dropping rear roof-line and cut-off tail suggest coupé-like grace in a sector populated by largely trad sedans. (NB: it has a normal boot, which swallows 424 litres, so it’s not huge.) Or perhaps they suggest Audi A7 Sportback. There’s the usual stuff about being able to render the car’s silhouette with just two lines, although to be fair to the creatives here the G80’s two-line game actually is strong. It’s there in the headlights, the details aft of the front wheelarches and in the rear lights.

The ‘matrix’ grille is the usual punchy Asia-Pacific fare, although better executed than many. And it’s big, measuring 5mm shy of 5m in length, closer to an S-Class than the E with which it competes, and arguably generating more presence than the Audi A6, BMW 5 Series, Jaguar XF and the near-invisible Lexus ES. (We’d de-chrome it, though.) Prices start at £37,460 (RM215k), so the G80 adheres to the age-old lot of metal for the money mantra. But it does also have quite an extensive options list.

“You might never fall in love with it, but nor will you find yourself shaking your fists at it in a moment of Fawlty-esque existential despair”

In some respects the Genesis G80 is as soothingly reassuring as a BBC Sunday night sitcom. Whatever else is bothering you – and the list is currently long, let’s face it – the G80’s primary goal is to make all the bad stuff go away. At least for the duration of your journey.

This is a noble aspiration for a car of this type and provided you don’t start asking it dynamic questions it doesn’t really want to answer, the G80 is generally impressive. It’s extremely well-made, easier to operate and less showy than some of its rivals, and ticks all the tech boxes. The interior experience, in particular, is world-class. We suspect that what’s coming next might be more exciting, but as a mobile manifesto for a new brand this’ll do just fine. 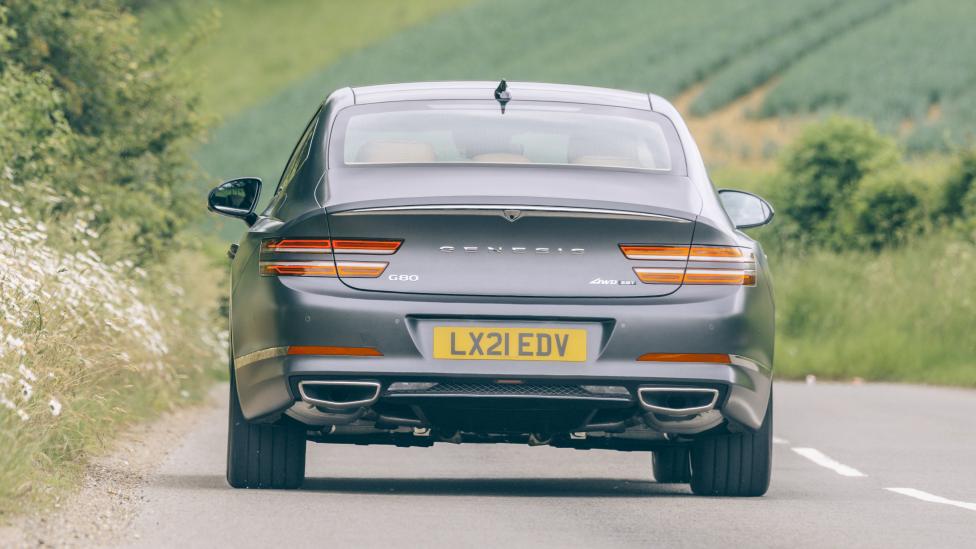 There is differentiation here, too, and it’s a refreshing one depending on how keen you are on driving your executive sedan on its slickly engineered doorhandles. Because, like the recently revealed and impressive DS 9, Genesis has gone all-out on comfort and refinement, with safety and technology also front and centre.

The entire offer is pleasingly streamlined, the G80 available with the choice of a 2.2-litre, 207bhp four-cylinder diesel in rear-drive only form, or a 2.5-litre, 300bhp turbocharged four-cylinder which gains all-wheel drive. That’s the one we tried, £45,800 (RM262k) before options, £57,370 (RM329k) as tested. It may seem nuts coming to market with only two ICE options while everyone else falls over themselves to embrace electrification, but the truth is that these cars are here to establish a bridgehead for the brand and the Genesis modus operandi. Hybrids, fully electric and hydrogen-powered models are all coming down the pipe. And we know how good the Hyundai mothership has become at this stuff.

Interesting, isn’t it, how quickly we’ve got used to driving cars with downsized engines. Not so long ago a car this size and weight with a mere four cylinders would have been laughed out of town. As it happens, the G80’s engine isn’t its best feature. It’s vocal when stretched and expresses only modest enthusiasm for high revs or spirited acceleration, should you decide to energise its two-tonne mass. Which isn’t to say the chassis lacks poise or that there isn’t a decent amount of grip when you’re on the limit. The issue is that every other aspect of the car is wondering why the hell you’d want to go there in the first place. It just doesn’t handle or hustle as well as its BMW, Jaguar or Mercedes competition.

Then again, who cares? Better to wind it all in and enjoy its terrific rolling refinement. Double glazing is standard on the front windows, an option on the rear, while the G80 also has a system that’s similar to the technology you’d find in noise-cancelling headphones. The upshot is a car of phenomenal decorum, although we suspect its ride is probably at its most civilised on the 19 rather than 20in wheels. It can feel a little unsettled on the bigger wheels, although its ‘ride preview’ tech scans the road ahead and adjusts the suspension to prepare the car for surface nasties before they intrude on the occupant’s well-being. It’s a generally very mindful sort of car. That’s a very 2021 USP. Genesis claims 10.82l/100km which is exactly what we achieved.

All the major controls have a well-oiled feel to them, the auto ’box slides imperceptibly through its eight ratios, and your inputs are dealt with in a generally polished manner. There’s a fighting chance this is one of those rare cars where you get out after a three-hour motorway schlep feeling better than you did when you got in. Especially when you familiarise yourself with the interior...

It’s a road test trope to nominate Audi as architect of the best car interiors. Well, Genesis is here to raze the traditional hierachy. The G80’s cabin is superbly screwed together, thoughtfully conceived, and delivers the perfect blend of digital and analogue. The doors shut with a very premium, beautifully damped thunk, admitting you to a cabin as well appointed and thoughtfully conceived as a particularly tasteful boutique hotel and spa. There is wood and leather but it’s core to the car not appliqué. The lids on the centre console storage areas – where you’d find the ashtray when everyone still smoked – have the finest action of any car we’ve ever driven.

Sure, you might want to spring for the Nappa seats (£2,350 (RM13k)) or the Lexicon audio system (£790 (RM4.5k)). And although the spec choice is impressively restrained by the standards of this class – Premium or Luxury, with four option packs  – it’s still possible to configure a G80 in a way that calls to mind the contents of a provincial grommet maker’s executive car park circa 1982. (Chestnut brown over smoky green, anyone? Actually it’s better than it sounds.) A £45k (RM258k) G80 can quickly become a £60k (RM344k) car, but that’s still less than a speedy trawl through its rivals’ Byzantine options list will get you to.

Other than that you really would have to visit the latest S-Class to find a cabin as pleasing as this. The central screen is navigated via a rotary touchpad or directly by touch in an easy and intuitive manner. Its graphics and illumination are spot-on, the haptics of the controller a text-book example of how to do it. Augmented reality uses real-life real-time footage from the front-facing camera to show the route ahead on the sat nav in stunningly rendered detail. The drive controller is another rotary job, also smooth in action. And the climate control combines touch with physical switchgear.

Go for that Nappa pack and you get a pair of massage seats, finished in quilted leather and so orthopedically advanced that they get the German back health association’s seal of approval. Look, you don’t have to be staring down the barrel of impending middle age to appreciate this stuff, you know. 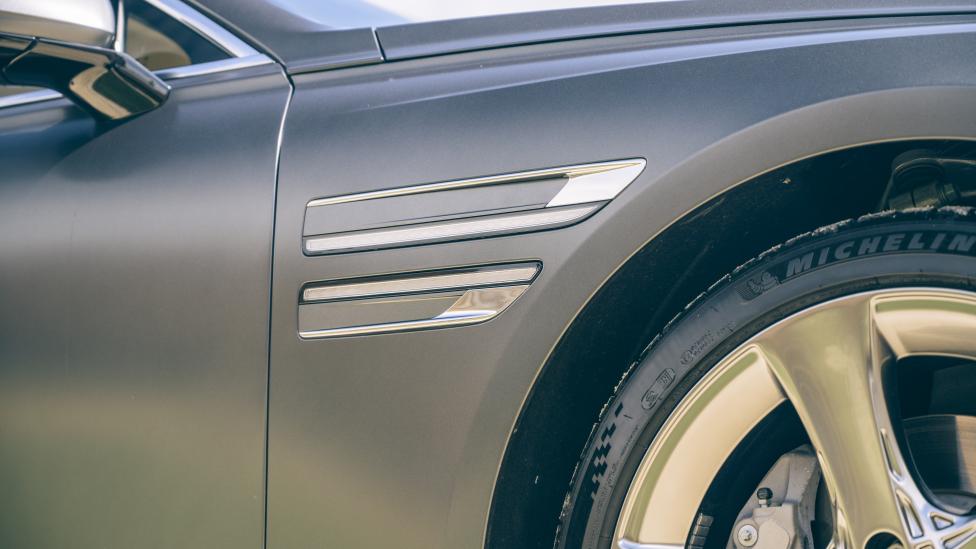 As we’ve noted, the ownership experience is critical to Genesis’ mission. The customer-focused buying experience aims to make everything as painless as possible. Configure your car online and Genesis will bring one to your home for you to try, while your personal assistant will take care of everything if you do take the plunge. The retail studios are primarily to raise the brand profile. It’s almost as if Genesis is ashamed of itself (and the industry it’s part of). A five-year warranty and roadside assistance are included. Seriously limited numbers will guarantee its rarity and protect residual values.

Safety is another key criterion. The G80 has pretty much every form of assistance currently available, including remote parking from the key fob, lane assist, and evasive steering assist. There are 10 airbags, including front centre ones. We like the blind spot view monitor, which uses cameras on the door mirrors to give a video feed to one of the instrument dials.

In terms of owning, then, the G80 aims to be about as satisfyingly seamless as any car could ever realistically be. You might never fall in love with it, but nor will you find yourself shaking your fists at it in a moment of Fawlty-esque existential despair. 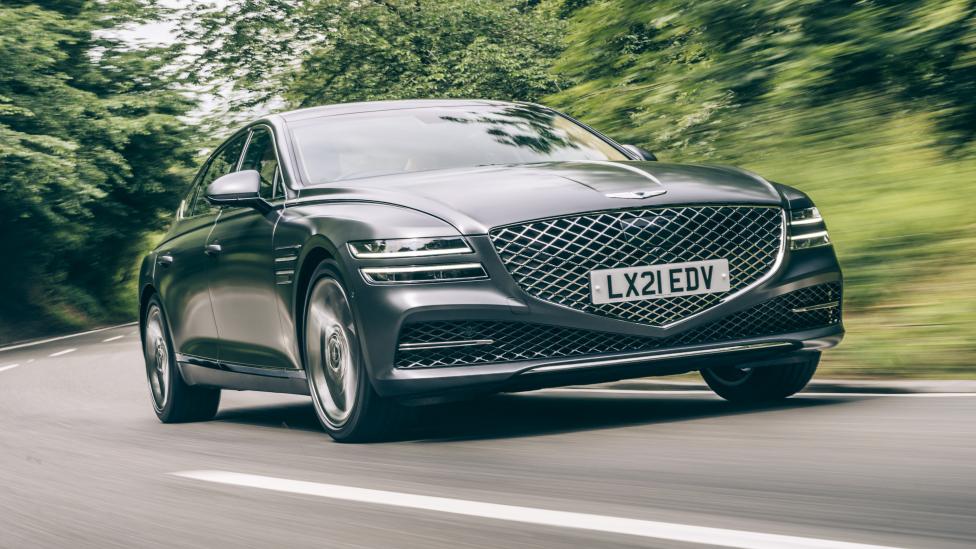 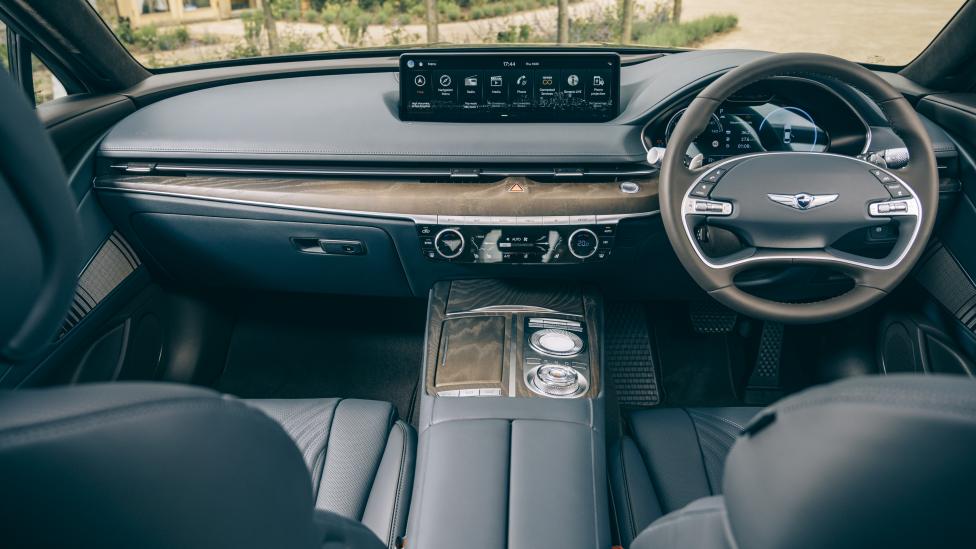 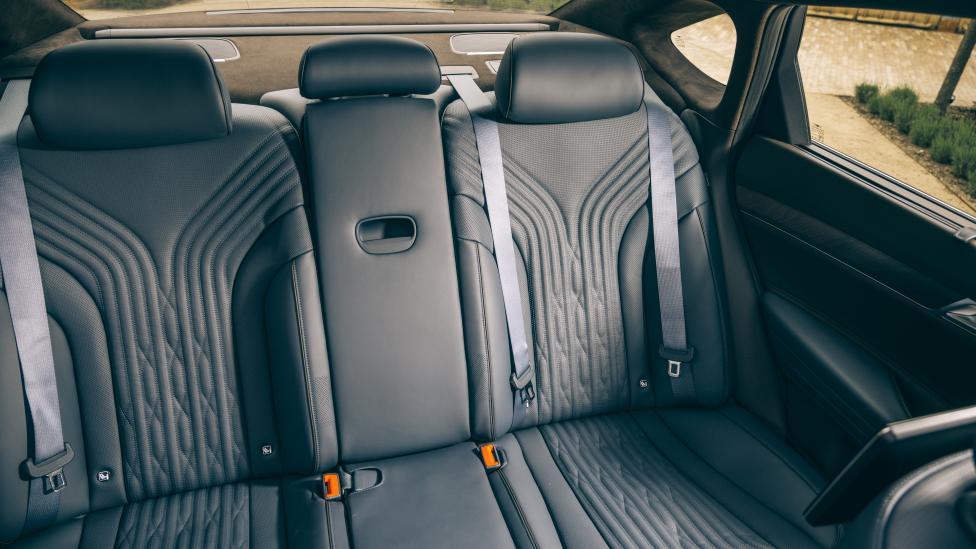 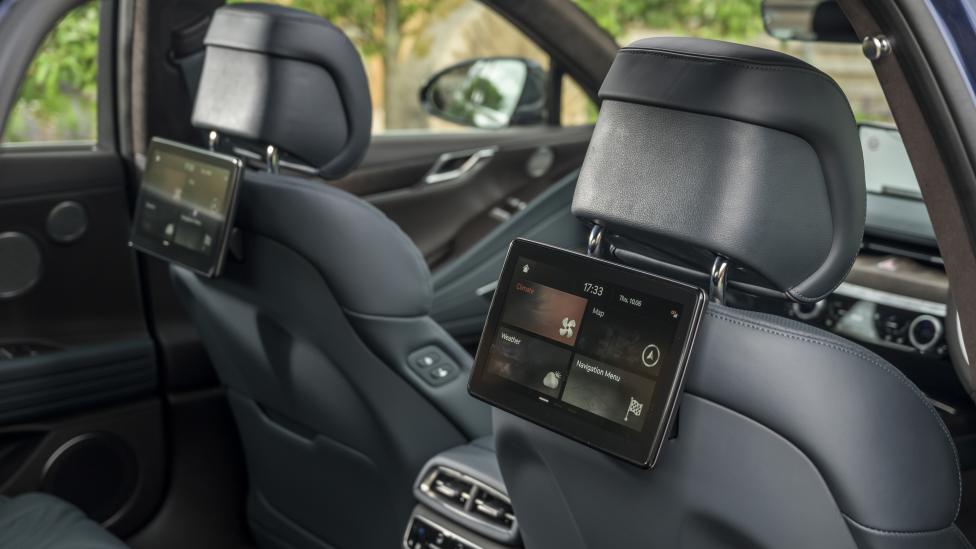 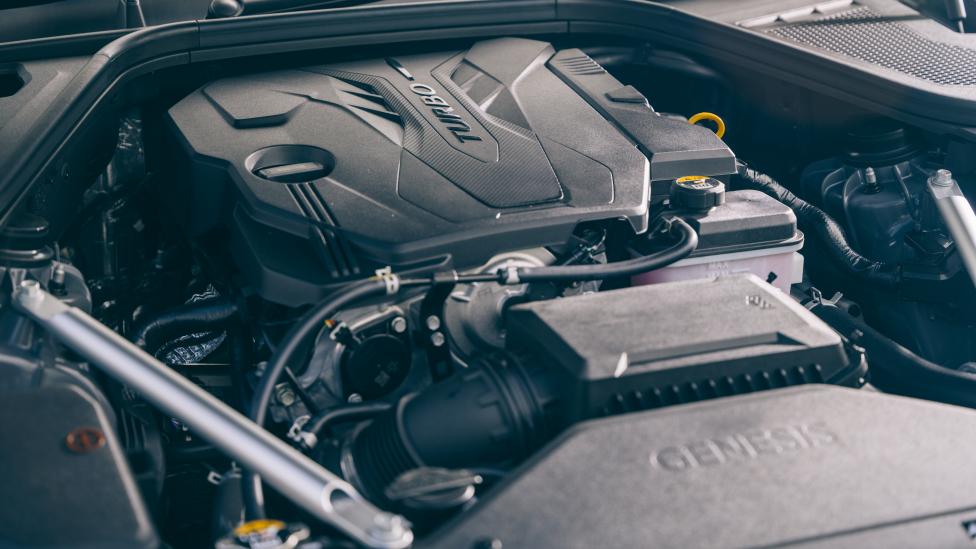 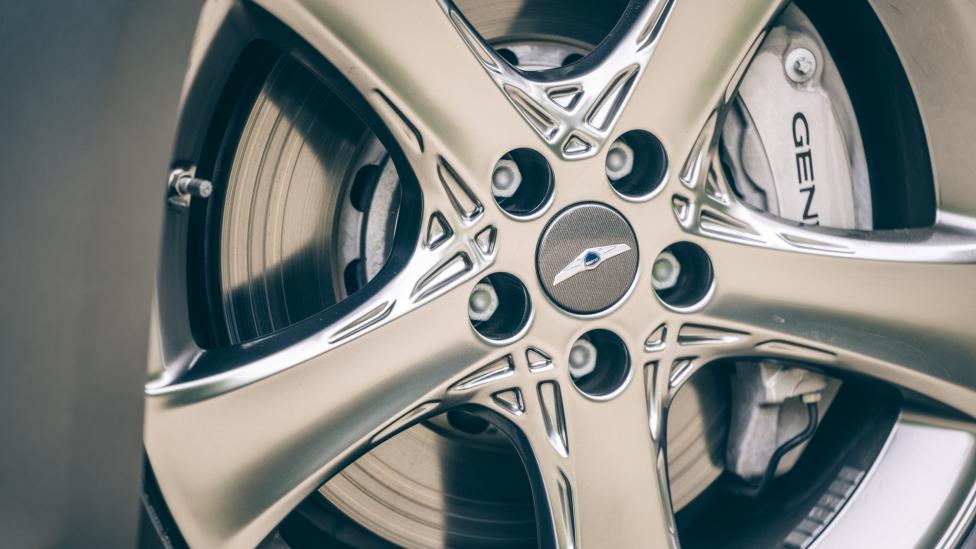