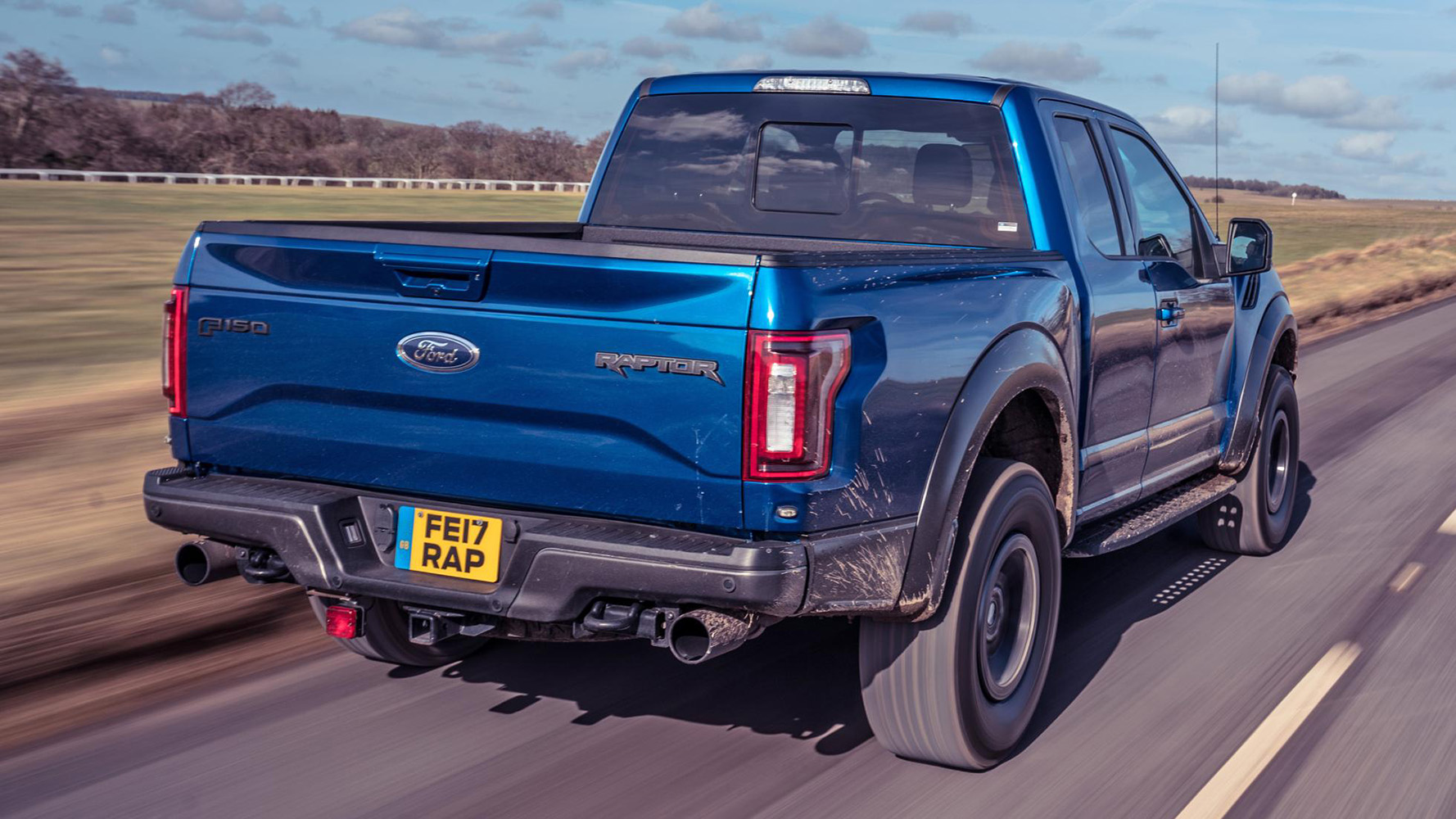 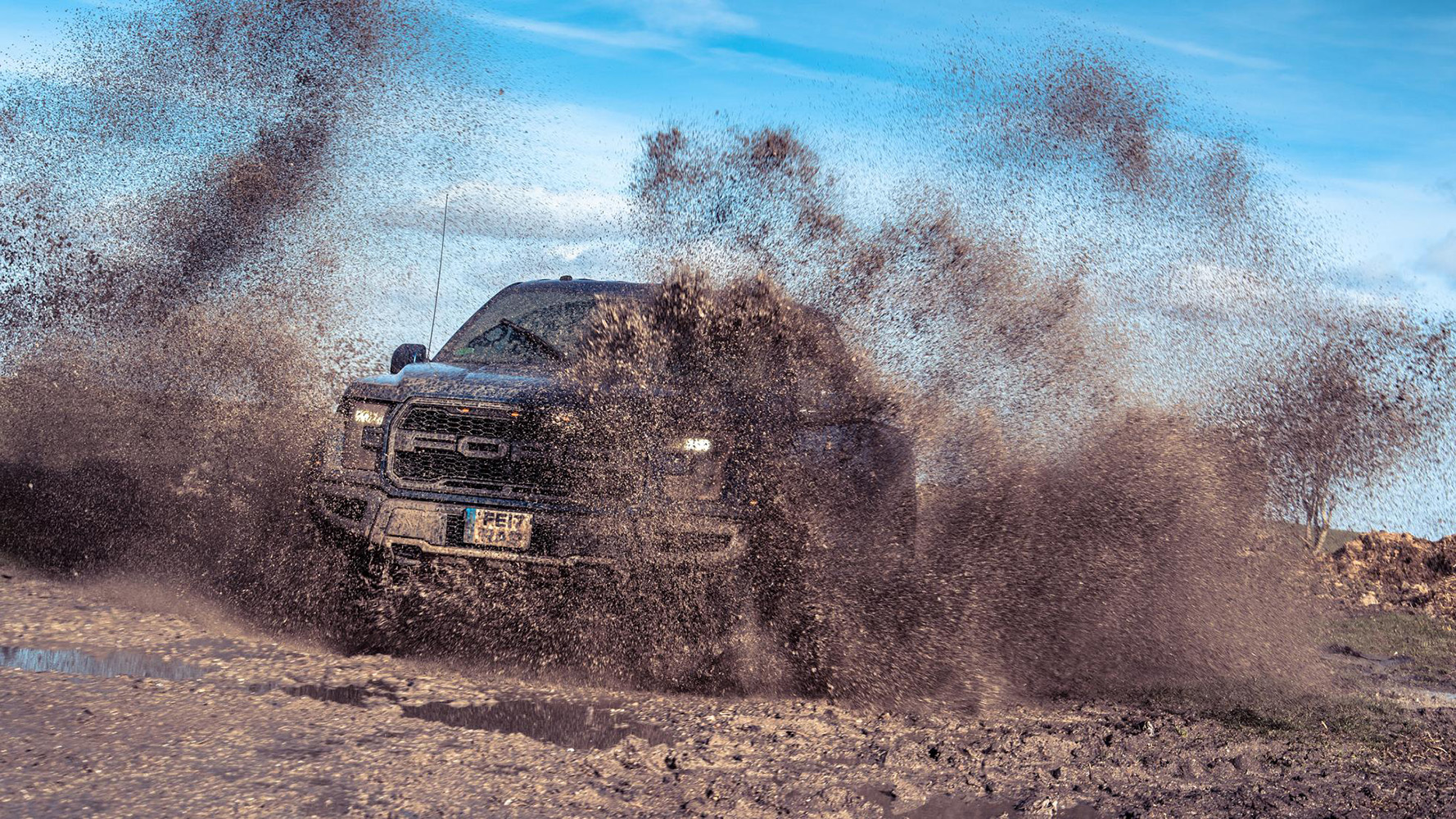 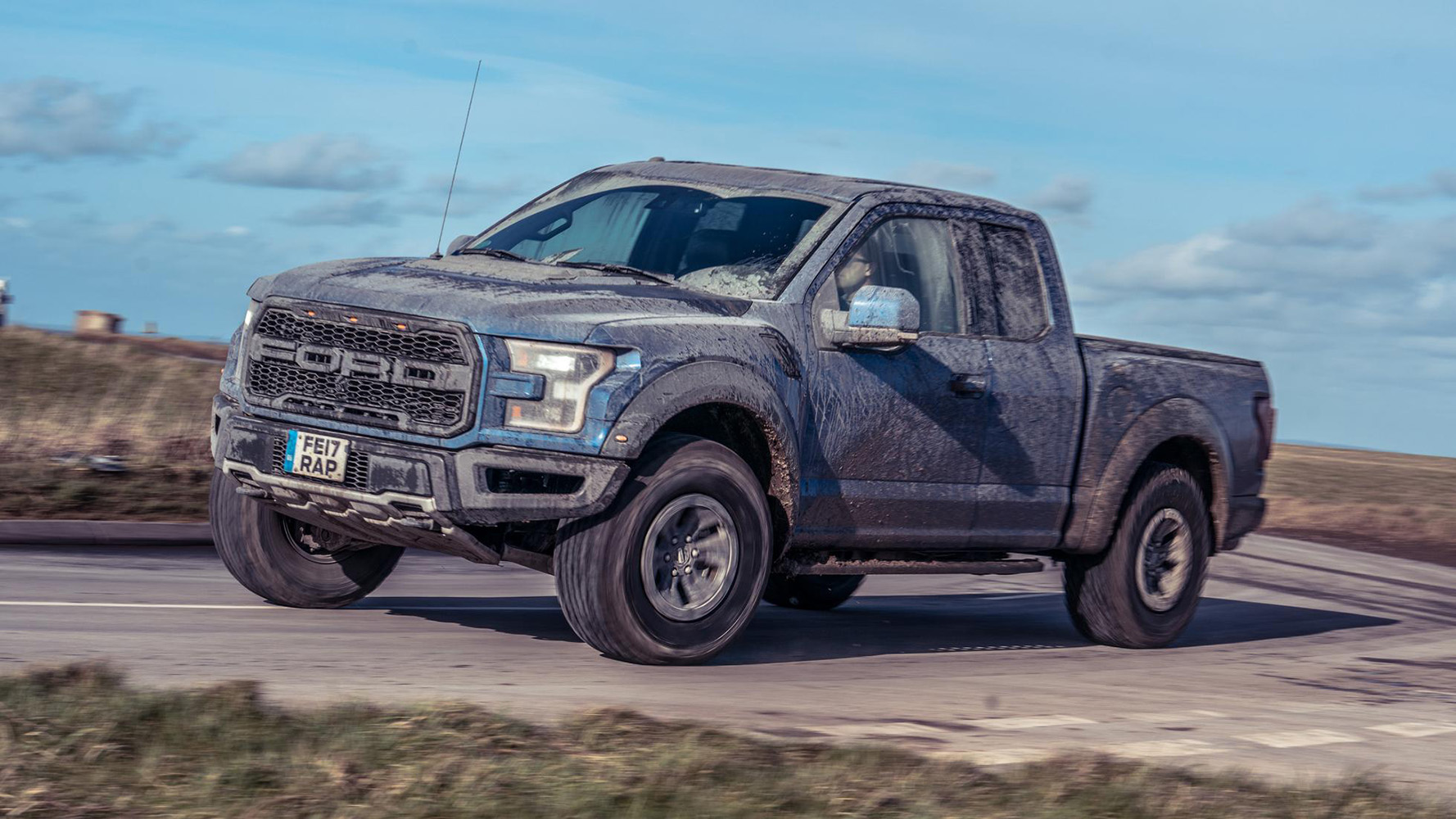 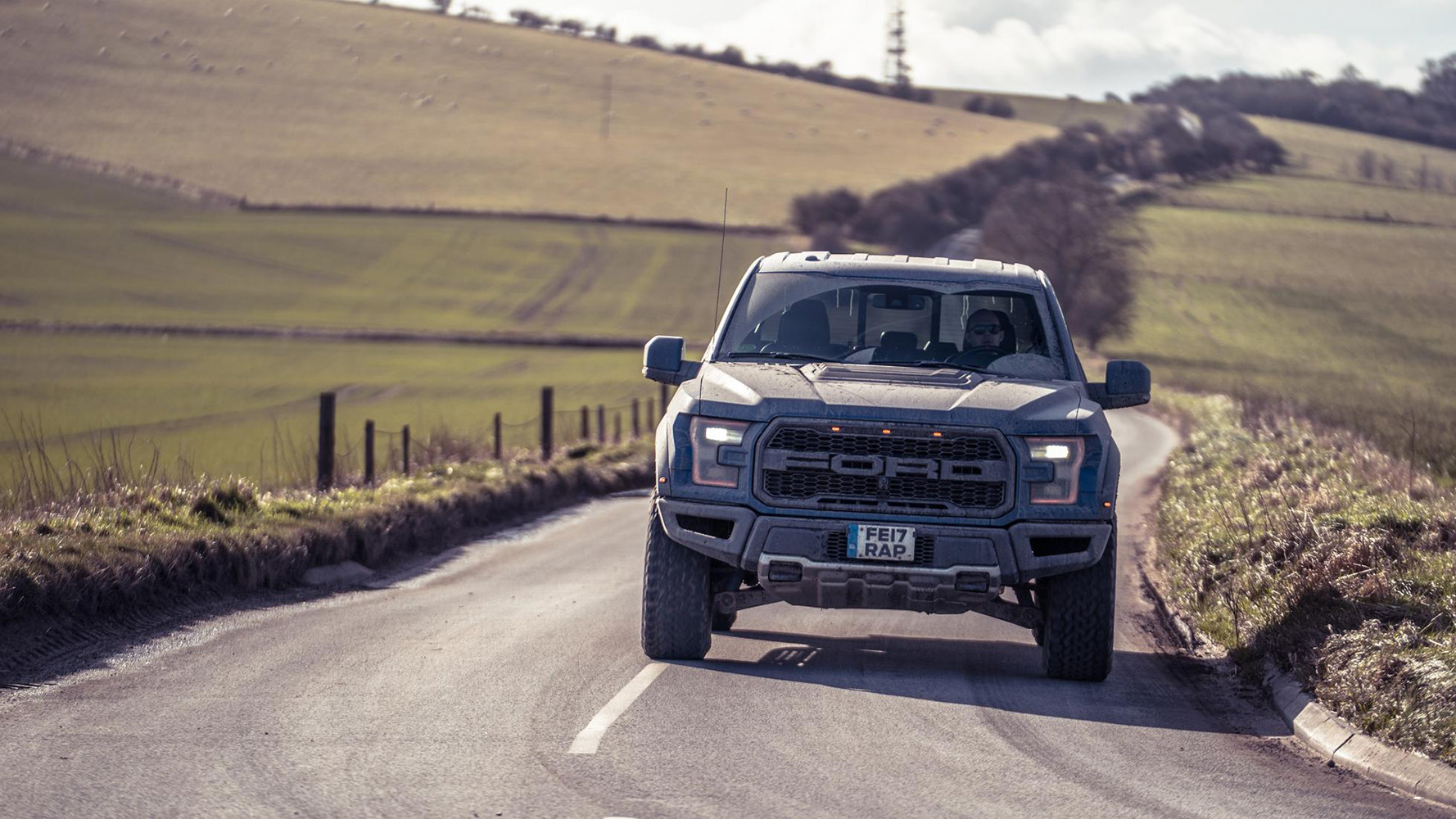 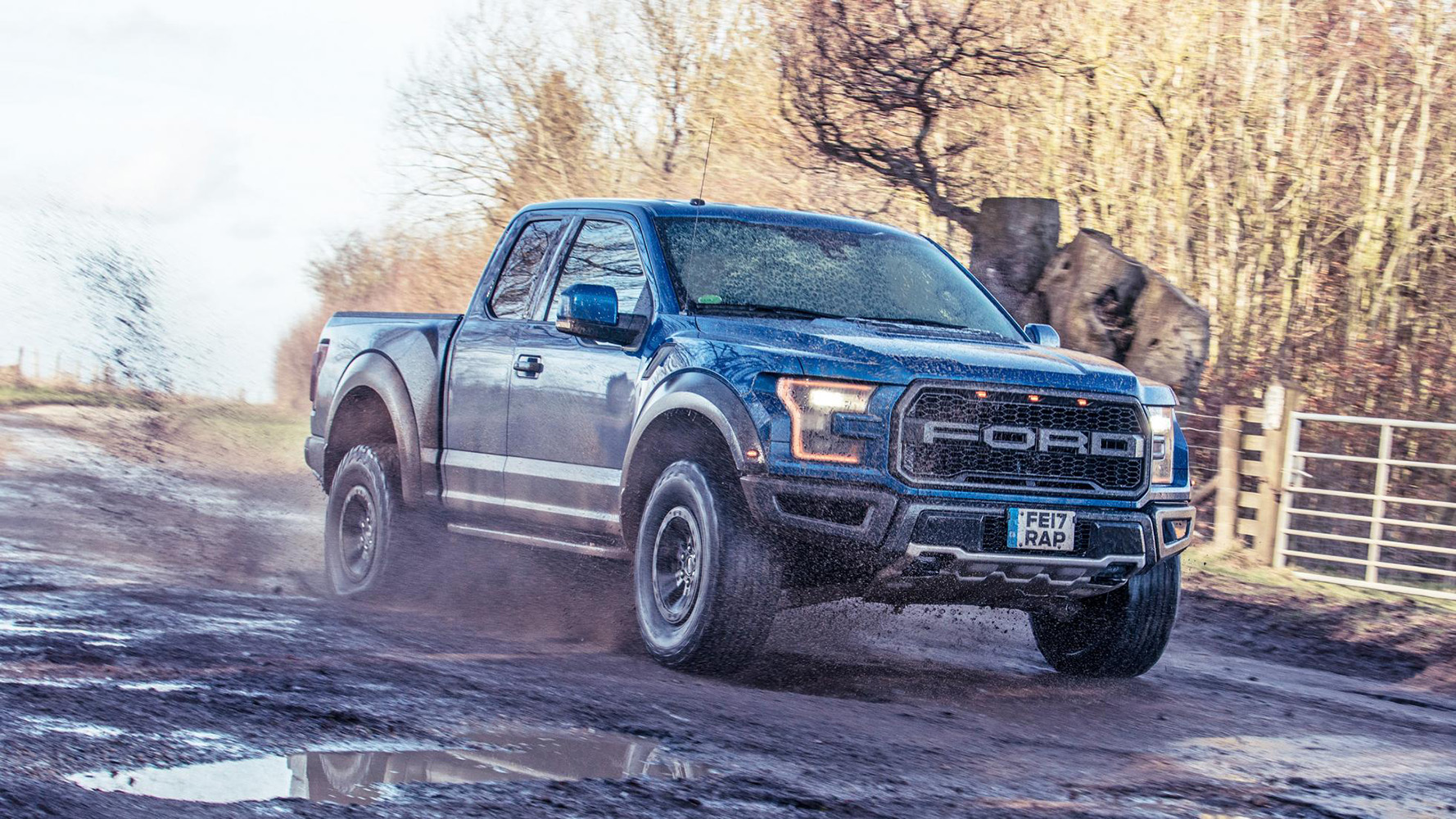 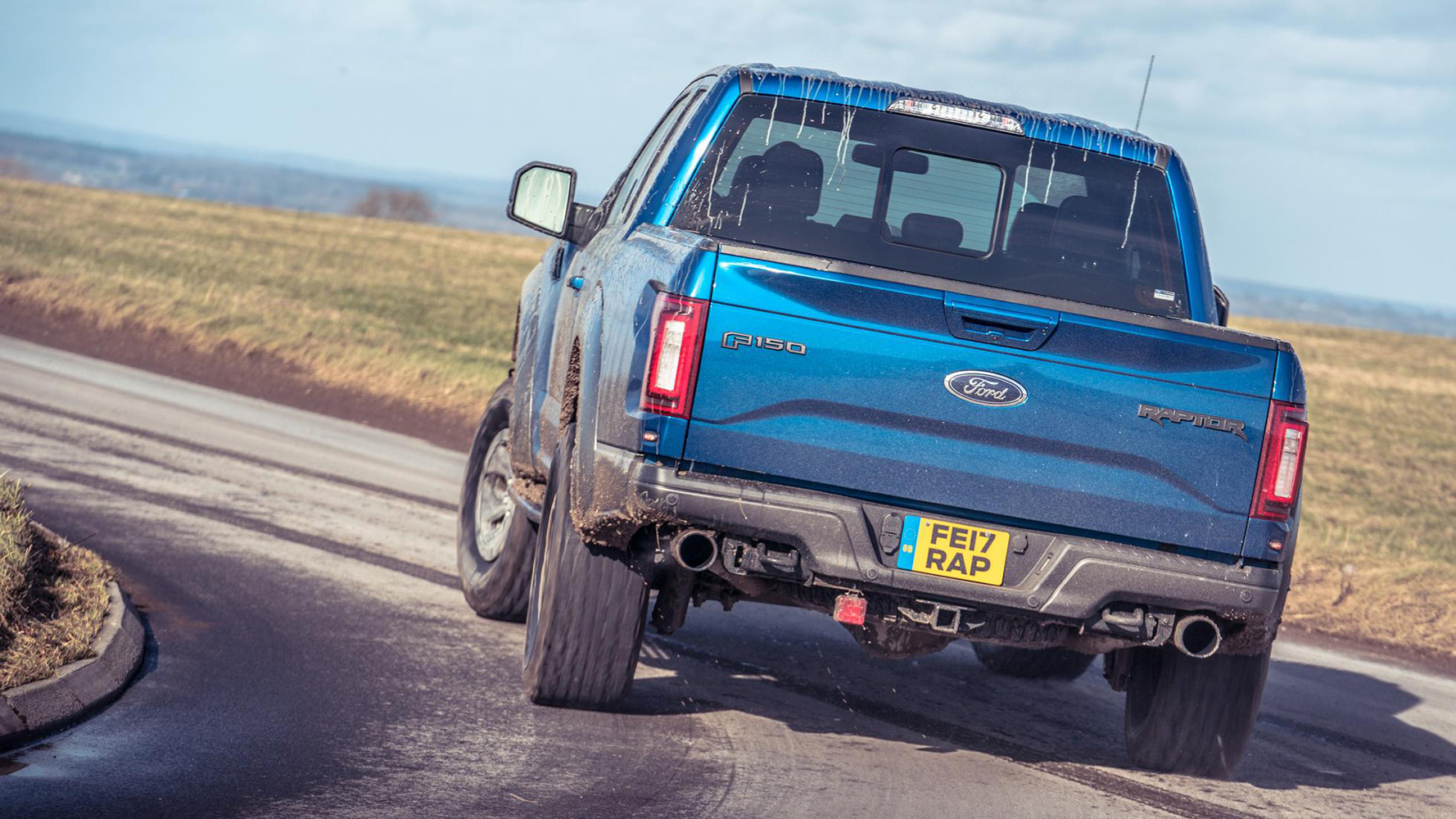 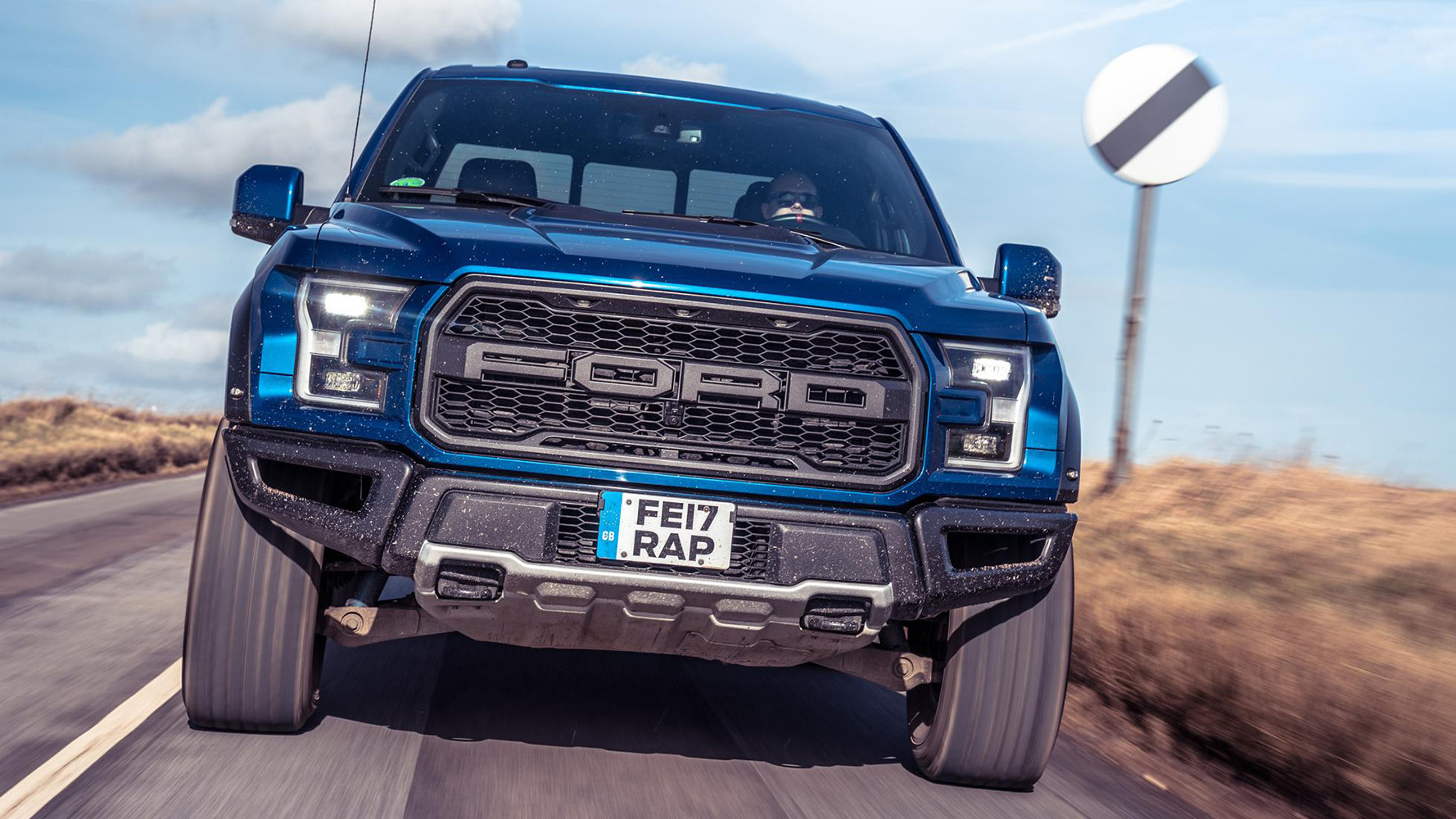 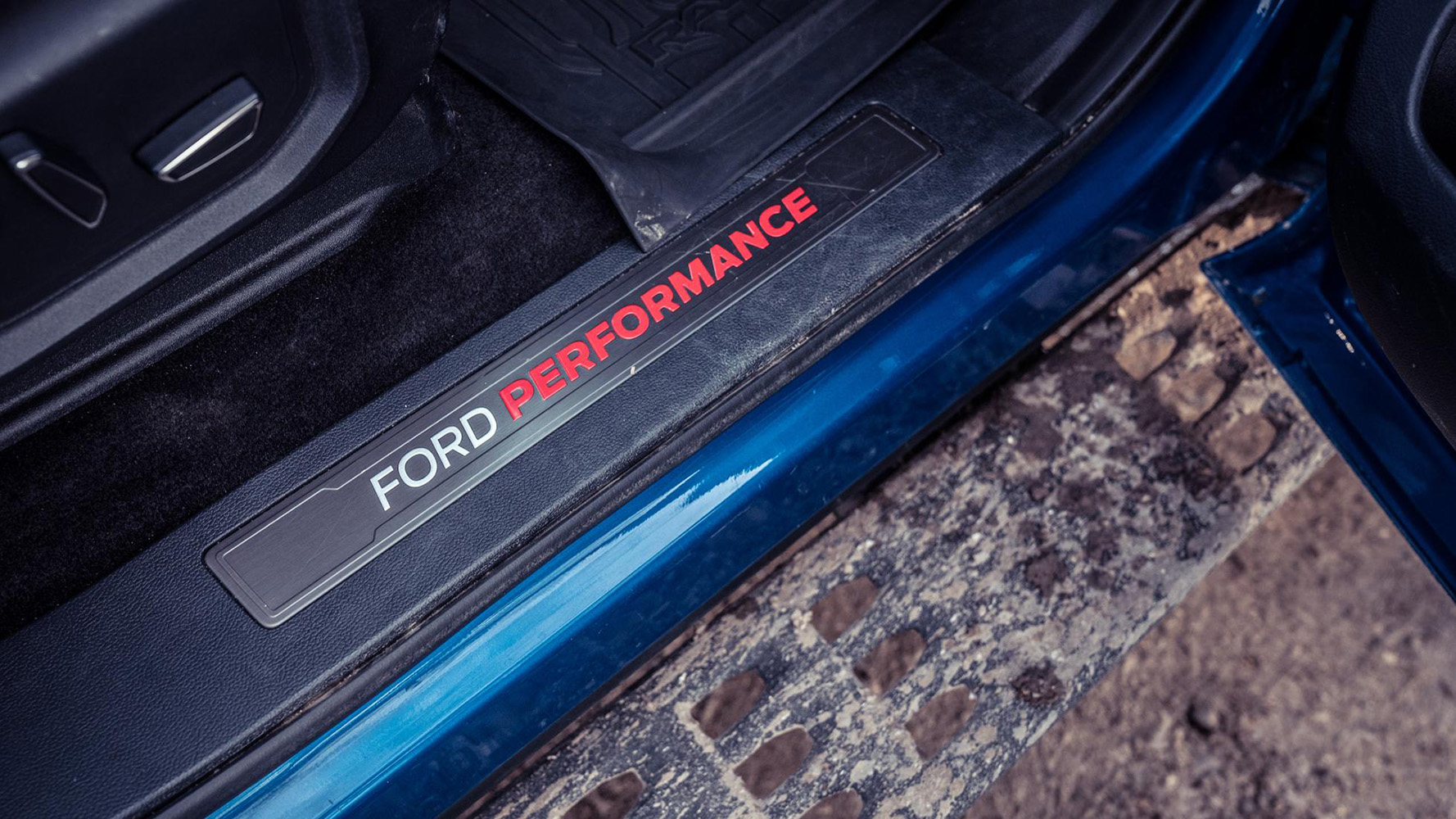 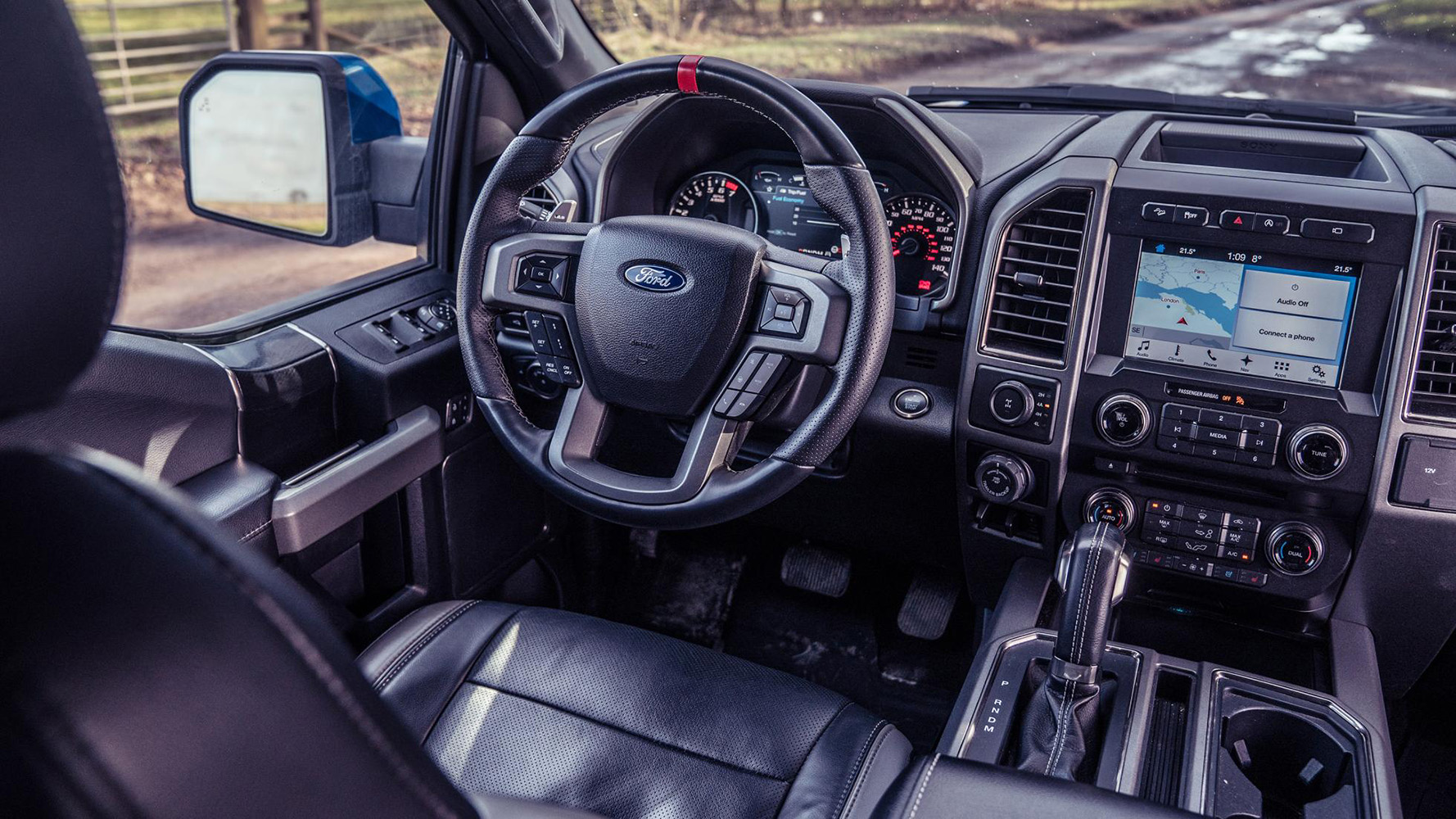 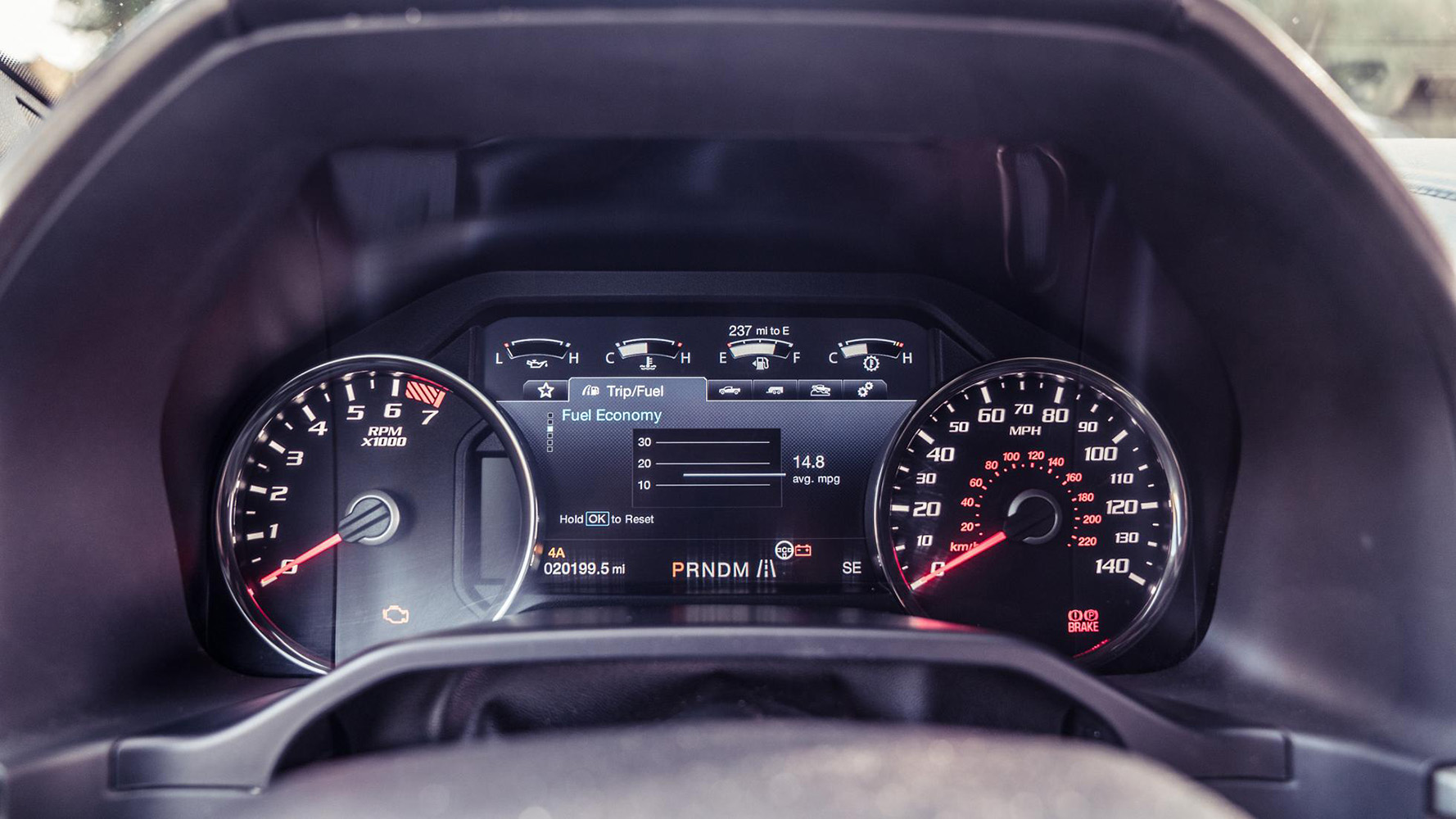 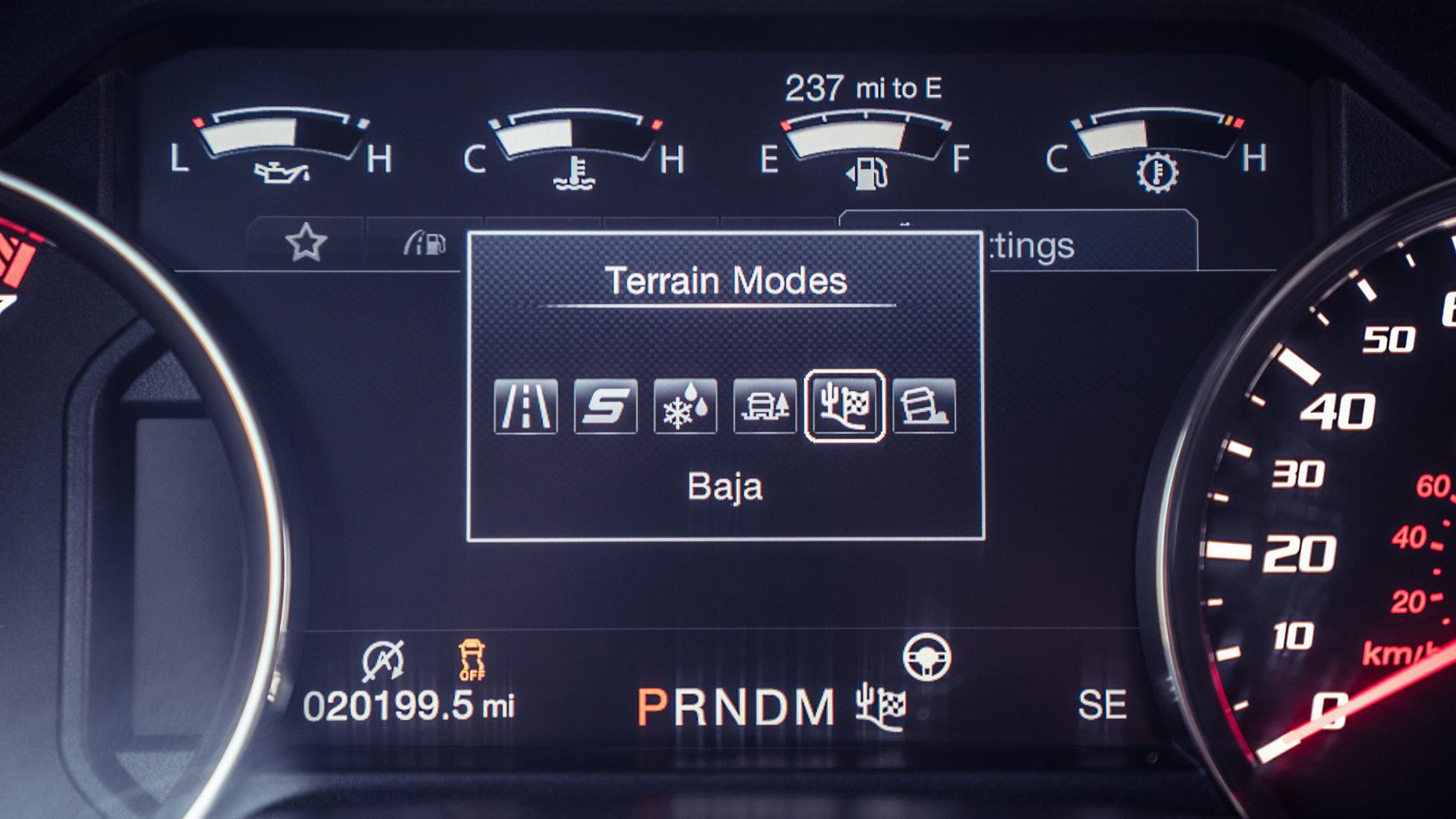 Yep. This is a US-market Ford F-150 Raptor, and we’ve shoehorned it onto a tight and twisting British B-road. Not really its natural home.

Ford knows it, too, and we won’t officially get the Raptor here. Mind, London dealer Clive Sutton is importing them, and even offering right-hand drive versions, so we thought we’d check to see if the F-150 actually fits. It does. Just.

I assume there’s a mad, rumbling V8 behind that unsubtle Ford emblem?

Actually, it’s a V6. Even F-150 Raptors can’t shirk the need to downsize. It’s no ordinary V6, though; it’s essentially the same turbocharged 3.5-litre ‘Ecoboost’ unit you’ll find in the Ford GT supercar, albeit in a softer tune. Its 450bhp and 691Nm peaks are still pretty punchy, mind. Punchy enough to propel the Raptor’s 2.5 tonnes to a 172kph top speed, via a 5.0sec 0-97kph sprint.

Four-wheel drive is standard, as you’d hope, but the Raptor defaults to two-wheel drive for road use. The engine comes only with a ten-speed automatic gearbox, with some tactile metallic paddles should you wish to bravely wade into juggling those ratios yourself. It’s probably worth packing an abacus to have a hope of keeping up with which gear you’re in.

Leave the gearbox to work things out for itself and it proves the V6 is more than torquey enough to act the role of a V8. The car selects eighth gear by 48kph, and tenth gear by 72kph. All of which helps contribute to a claimed 19mpg (14.9L/100km) average, which we came perilously close to achieving on a motorway run. Where the Raptor is also miraculously quiet and relaxing at a 110kph cruise. Fine. Find an intricate piece of road and it’s anything but quiet and relaxing. At low speed it’s fairly fidgety. For all of its fancy terrain mode choices (from ‘Sport’ right up to ‘Baja’) and Fox shocks, this is still a fairly rugged vehicle under the skin, one that needs some load in its suspension to properly settle down.

You’re left with a vehicle that patters around over small lumps and bumps but then sails over tricky pot holes and elaborate speed bumps like they’re not there. It makes mountains out of molehills but will, presumably, make a molehill out of a mountain. Give it a proper challenge and it really wants to get stuck in. The faster and harder you go, the more sense it makes.

You said two-wheel drive. Does it drift?

Find a barren desert floor and we imagine it’ll drift all day long. On a weeny country road designed for Britain’s comparatively modest cars, not so much. But there’s an irresistible boisterousness to the Raptor when it’s rear-drive only, from pulling away, as it squirms and scrabbles for grip, to tight corners, where it’ll smear its tyres the tiniest bit before the stability control uncouthly muscles in.

Mind, boisterous cornering means heavy use of the brakes, which start to smell very hot, very quickly. Treating it like an uncommonly talented Porsche Cayenne Turbo or Range Rover SVR is definitely not the best approach. Better to be smoother and more measured, avoiding sudden inputs. Then it can be an extremely satisfying thing to drive briskly.

And flipping heck, it is brisk. Something this heavy (and bluff) is never going to make 450bhp feel as assertive as it is in a BMW M4 or suchlike. Yet the way the Raptor lunges at the horizon in a low gear is laugh-out loud funny.

It’s not intimidatingly wide, either. It takes some getting used to, of course, especially if it’s still left-hand drive like this one. But it’s so slab-sided, you’ll soon be threading it through gaps and past parked cars without too much concern. There are a plethora of cameras and sensors to help you park the thing, too. The reversing camera has been ingeniously angled so that it doesn’t get all muddy. Looks like you got the rest of it muddy, though.

Well, we could talk all day about how surprisingly accomplished the Raptor is at brisk road driving or sensible motorway cruising, but it’s built for neither. And it’s amazing how quickly it’ll open your eyes to unexpected off-roading opportunities.

On a British B-road, you’ll suddenly see muddy lanes forking out of every layby and make-shift car park. Drive a Raptor and your brain becomes hyper-alert to opportunities to bury it in mud and drench it in puddles.

At which point it all makes sense, the whole thing feels in its element. It’s like a big, dependable dog that will happily walk sensibly round the block with you, but which really – whenever possible – wants to be chasing rodents and getting dirt all over its belly. When mud’s dripping from the doors and sills, you’ll need to wear similarly dirt-friendly clothes to a dog-walker, too.

What’s the point of it all?

On the one hand, it’s supremely practical, capable of towing nearly three tonnes behind its ginormous load bay. Even the cubby hole between the driver and front passenger – typically a place to plug in your phone or keep some mints – can swallow an ambitiously stuffed rucksack.

On the other, it’s a toy of the most wondrously daft variety. The UK’s off-road lanes are probably too small and precious for it, but a large American Canyon would allow you to really open the taps on this and discover just how sky-high its limits are.

Yet it offers a curious middle ground. As the SUV market exponentially grows, the benefits of a soft-roader’s slightly taller driving position dwindle – it’s no use if everyone’s at the same height. But here’s something taller than any SUV or pick-up, and considerably more rough’n’tumble to look at. It occupies the space SUVs used to before they become the norm.