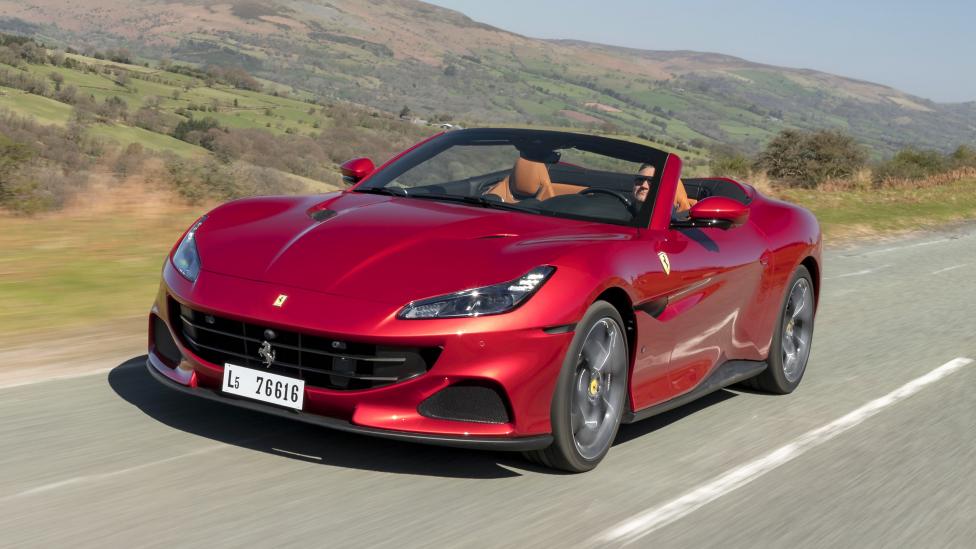 It would be damning the Portofino M with faint praise to say that this is ‘just a facelift’ of the standard Portofino, because there’s been a whole raft of changes, and some of them are really quite lovely. But yes, this is an evolution of the familiar GT/Spider convertible, bearing as it does Ferrari’s usual ‘M’ (for ‘Modificata’) suffix that denotes cars that have had a ‘significant boost to their performance’. It’s not so much a Portofino on steroids as much as a Portofino that’s been down the gym for a bit and mainlined some espresso. Easy identifiers? The M features more aggressive intakes on the front bumper, with a new drag-reducing vent on the top at wheelarch height, a new grille and a more pert rear thanks to a re-designed exhaust system - more on that later. There’s a new rear diffuser, new wheels and lots of little detail changes.

In comes the 612bhp biturbo V8 and 8-spd paddleshift ‘box from the Roma Coupe (a car that costs nigh-on the same basic at £171k vs £175k (RM979k vs RM1million) for the ‘fino M), in comes better aero, better brake feel, more options on the Manettino drive selector, more driver-assistance systems and plenty of other improvements that should make it generally nicer - and by that we mean faster and more satisfying - to drive. More on that over in the ‘Driving’ section.

THAT’S NOT TO SAY IT’S SUDDENLY A RACETRACK REFUGEE…

Not at all. One of Ferrari’s key points for this car is that it shouldn’t just be a harder version of the Portofino, but one that still appealed to people who want to cruise. There was plenty of chat about ‘usability’ and ease of use from the people in charge of the programme, who seemed perfectly comfortable with the fact that the Portofino should be as good at slow-speed showing off as full-gas thrills - and it’s the first time parking practicality has come up in a Ferrari press conference that we can remember. Still, it’s not physically the biggest Ferrari  - though it’s still not that petite at over 2-metres wide including the mirrors and just under 4.6-metres long - and the new gearbox is absolutely spot-on for pottering as well as redline-bashing. The car also rides somewhat more languidly in the softest settings, which is actually very nice, and the improved brake-pedal feel might be more noticeable on the track, but it also helps you be smooth on the road and in traffic. WHO ASKED FOR THIS? DID ANYONE ASK FOR THIS?

Apparently, yes. Ferrari insist that customers were looking for more bite from their Portofino(s), and the M is the result. But again, you’re looking at a car that’s not actually suddenly morphed into a 488 Pista clone, just pulled some of the fat from the standard car’s midriff and tightened everything up. Put it this way, there’s nothing in the M that you wouldn’t want for fear of ruining a specific aspect of the standard Portofino’s character. It’s better all-round.

THIS OR THE ROMA?

Different cars, obviously. But the Portofino M now shares the engine and ‘box from its sister car, a good chunk of the chassis and the wheelbase and general proportions. But the Roma is lighter, more sporty and a coupe. The Portofino M comes with a more laid-back feel, and you (obviously) get that option of dropping the roof when it’s nice out. Top Gear would go for the less fussy, more focussed Roma, but that’s not to say we wouldn’t want to borrow a Portofino M for a weekend if the weather looked clement.

“A chiselled and upgraded version of Ferrari’s ‘2+ GT Spider’, the Portofino. Think evolution rather than revolution”

The Portofino M is a better car than the standard Portofino in pretty much all of the key aspects. It’s better to drive, more efficient, contains more tech and yet retains the gentler abilities that appeal to people who want their Ferrari to be a daily driver, rather than a weekend warrior. And it’ll still have your arm off if you take the mickey in the wet with the traction control off. Issues are closely aligned with personal taste and preference - at £175k (RM1million) basic, the Portofino M is not cheap, and Ferrari itself makes cars that feel more Ferrari-ish - this does not feel like a definitive vehicle for the marque. Saying that, it’s more dramatic than stuff like a £150k-ish (RM859k-ish) Porsche 911 Turbo Cab, more theatrical than anything Mercedes makes in the sector - it just depends what you’re looking to use it for. 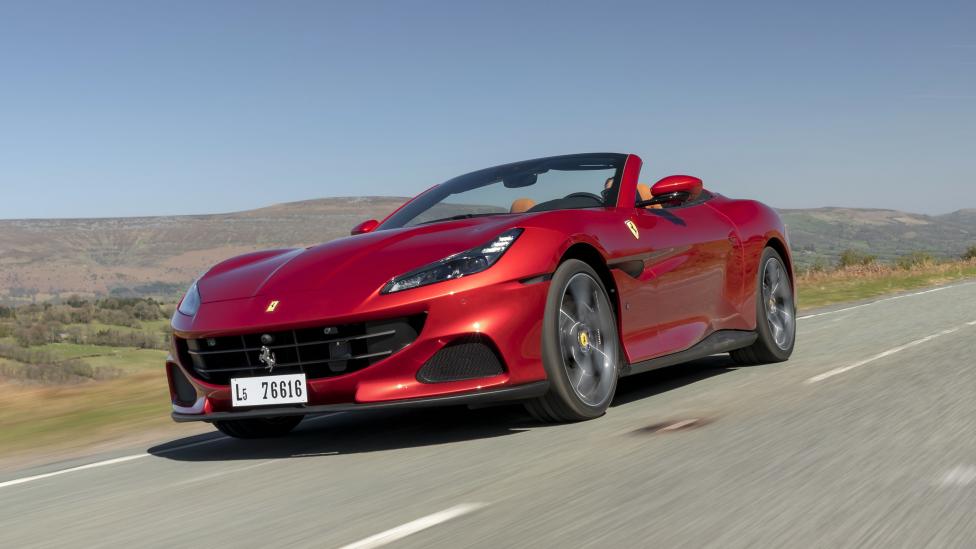 Your first question will no doubt be whether the extra power makes any difference. It’s not really the numbers that make the difference, though, more the whole package. The big news in terms of hardware comes with a slight uplift in power to 612bhp from the brilliant 3.9-litre turbo V8, as well as the adoption of the 8-speed paddleshift gearbox that features elsewhere in the Ferrari range. The modest power bump comes courtesy of new camshaft profiles, a new speed sensor in the turbo housing that allows better monitoring and an increase in turbine speed of 5,000rpm, and a new exhaust with a trick gasoline particulate filter (GDF), that allows the M to meet Euro-6D emissions standards, and also have a more tucked-in bottom. All good stuff.

The ‘box itself is similar to the one in the SF90 Stradale, but comes with longer ratios and a mechanical reverse gear, and as well as being smaller than the old gearbox, it’s also lighter. Which all bodes well. Interestingly, it’s got a slight quirk in that it will happily try and pull 8th gear at 48kph sub-1,000rpm. It’ll do it, too - it just feels weird to have the engine barely above idle in top mooching through town.

As far as it being a fast car, it most certainly is. The sprint is handled in under 3.5 seconds, and that’s do-able in the dry. The gearbox absolutely launches changes at full throttle though, so you better be ready if the ESC is off and it’s even mildly damp. Wheelspin… yes. Up to fourth.

Top end is just under 322kph with the roof up, and the switchable exhaust gets louder/softer depending on mode. Though it never really reaches the spine-tingling abilities of some of Ferrari’s other products, it’s pleasing, if a little muffled. But the brakes are a very notable change, removing ten per cent of the travel from the pedal versus the standard car. Small change, big difference.

Like all front-engined Ferraris, the Portofino M has that pleasing trick of rotating around the middle of the car, rather than feeling like you’re turning the nose in before the rest of it. And it’s as flat and composed as you would expect. You now also get more chance to express yourself, with two extra positions from the Manettino drive-select dial on the right-hand side of the wheel. And it goes a little something like this: Wet (maximum stability and control), Comfort (Normal use on dry roads), Sport (sporty driving), Race (‘maximises driving pleasure’ according to Ferrari), ESC-Off (VDC and F1-TCS both deactivated, pray).

And yes, the M gets a full suite of vehicle dynamics control systems from Side-Slip Control (SSC), an E-diff, F1-TCS, SCM-E Frs and the Ferrari Dynamic Enhancer or FDE. All of which seem keen to let you have fun, but prevent you from crashing. Basically they’re drifty modes of various states of paranoia, some of which make the car feel spookily four-wheel drive. It does, however, get a bit confusing at times, because you’re not absolutely sure whether its you making the correction, or the car helping you out. Excellent systems, but the purity and connection is slightly dialled out in line with the Portofino M’s usage profile, we suspect.

I WANT TO CRUISE…

Stick it in Comfort mode, and the M scuttles down the road very nicely indeed. It’s not a magic carpet - no car with these kinds of performance figures really can be - and it’s not super-light, but the magnetorheological damping soothes away a road’s worst excesses ninety per. cent of the time. In Race, a British B-road will fox it, leading to some eye-widening stutters on badly surfaced tarmac, but that’s at speeds/braking events probably best not mentioned. It really ticks all of the boxes, without being outstanding in any.

Obviously, with this being a retractable hard top, there’s a fair bit of weight carried just where physics gets annoyed with it. But the roof goes up and down quickly enough, with the rear panel roosting above your head while the rear assembly packages itself away. And it really does look good roof up or down. And once it is down, you get a good view of the cabin, which seems nicely made, and cleverly designed, if a bit busy at times. There’s a multi-level dash, with a 10.25-inch touchscreen in the centre, a central spar down the middle that houses the gearbox functions and a big rev-counter in front of the driver. Plenty of standard kit, and even an optional touchscreen for the passenger. The seats are comfortable, the view acceptable. All pretty much Ferrari standard, and none the worse for it. There’s even a little M plaque on the far side of the dashboard, in case you forget what you’ve bought. 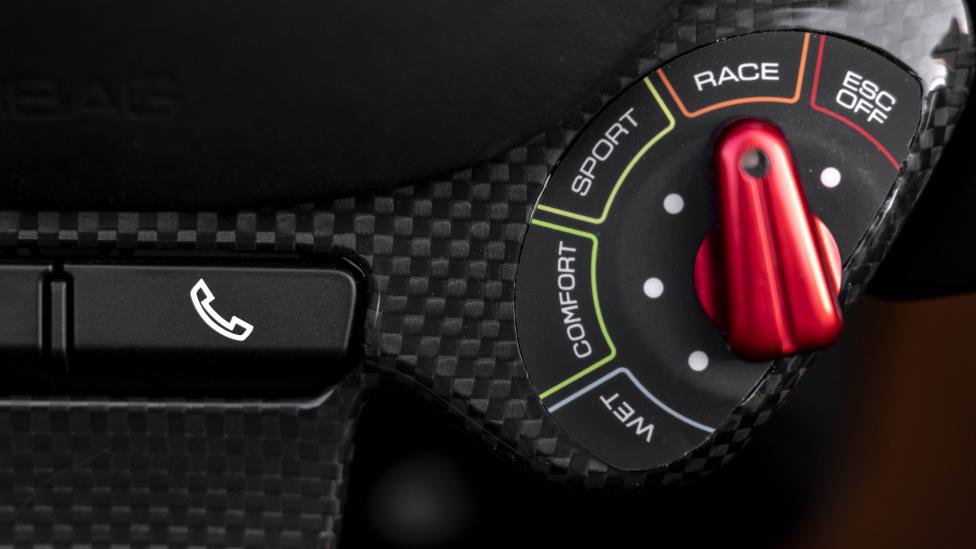 CAN I GET MY GOLF BATS AND KIDS IN IT?

Hmm. Well, the +2 seating really isn’t, unless they’re small kids. You can, however, push the passenger seat forwards and get someone in behind to make a semi-acceptable three-seater, though still for short journeys. As for storage, there’s a 292-litre boot that gets eaten by the roof, and a cover inside that needs to be in position before the roof will stow. It’s not that practical if you intend to drop the top, in other words. You can flop part of the seatbacks down, which means you can slot in a golf bag or other longer items, but this isn’t a van, and shouldn’t be treated as such. Go and bag an FF if you need to move stuff.

So be wary rather than wanton with the options list, or you’ll be burned. Saying that there’s a seven-year maintenance package, five-year warranty and decent aftercare. Servicing is roughly every 12,500 miles (20k km) or yearly, and limited supply means the M should retain decent value.

If we’re being honest, those lucky enough to be considering a Portofino M are probably not overly concerned with lease/PCP costs and the purchase price of 285/35 ZR20 tyres. 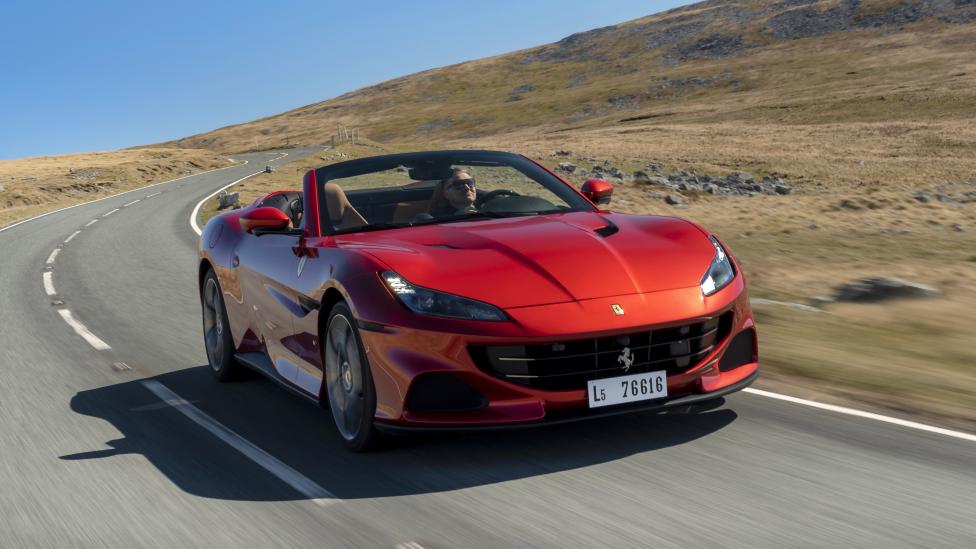 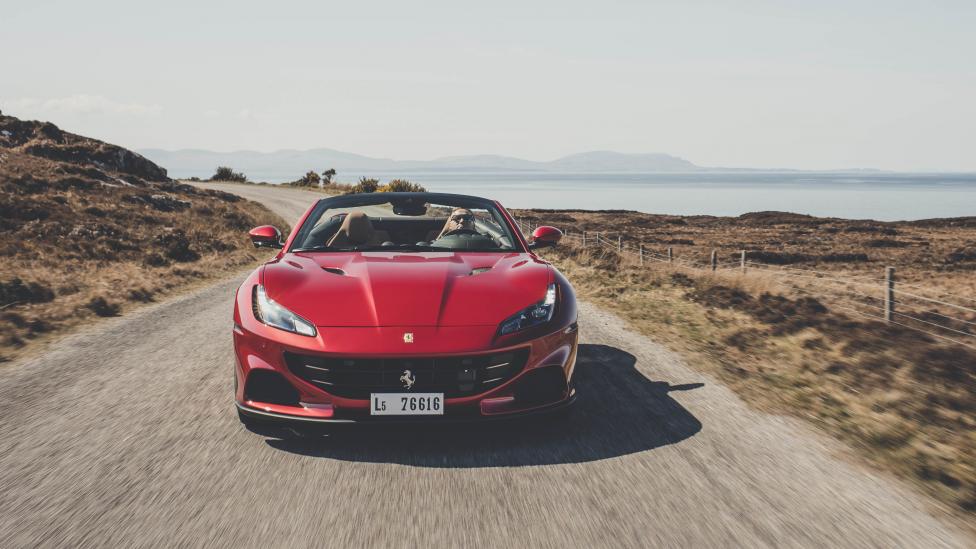 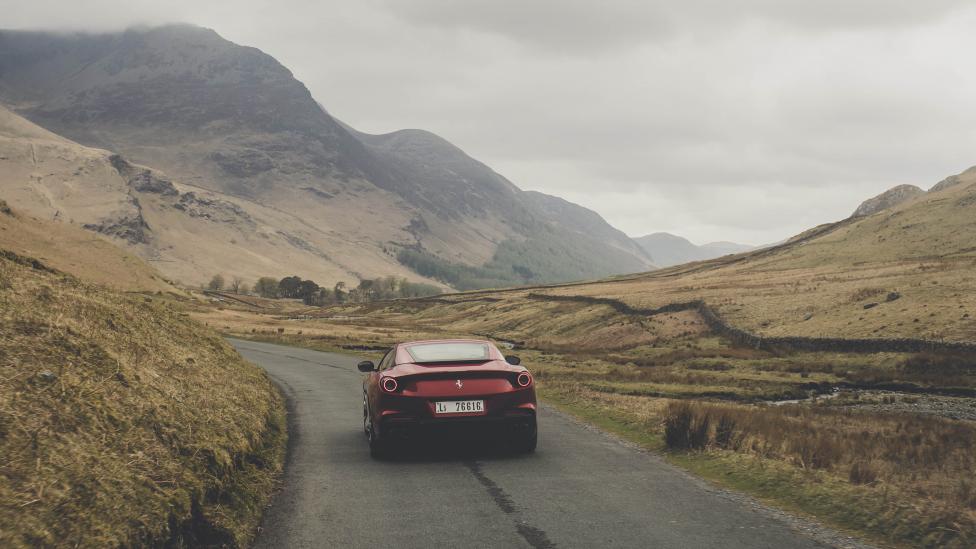 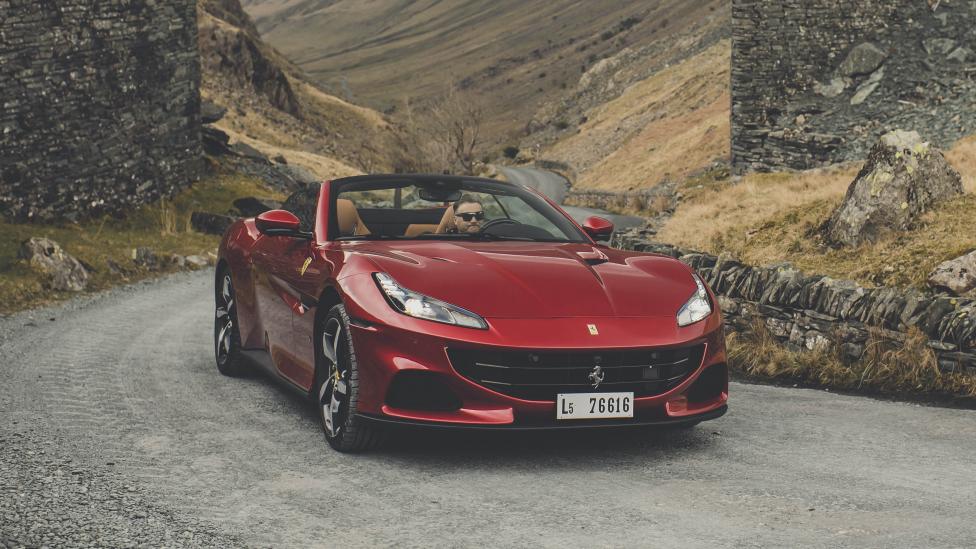 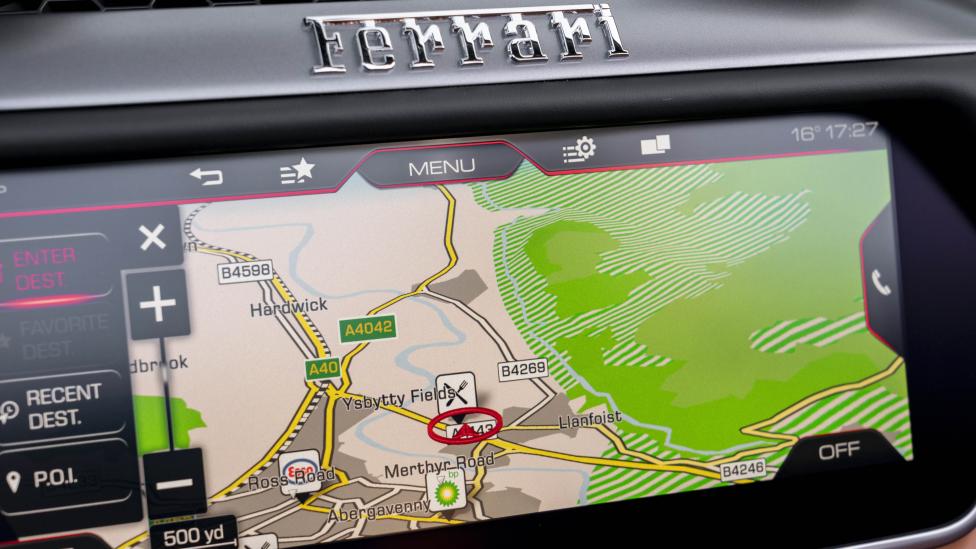 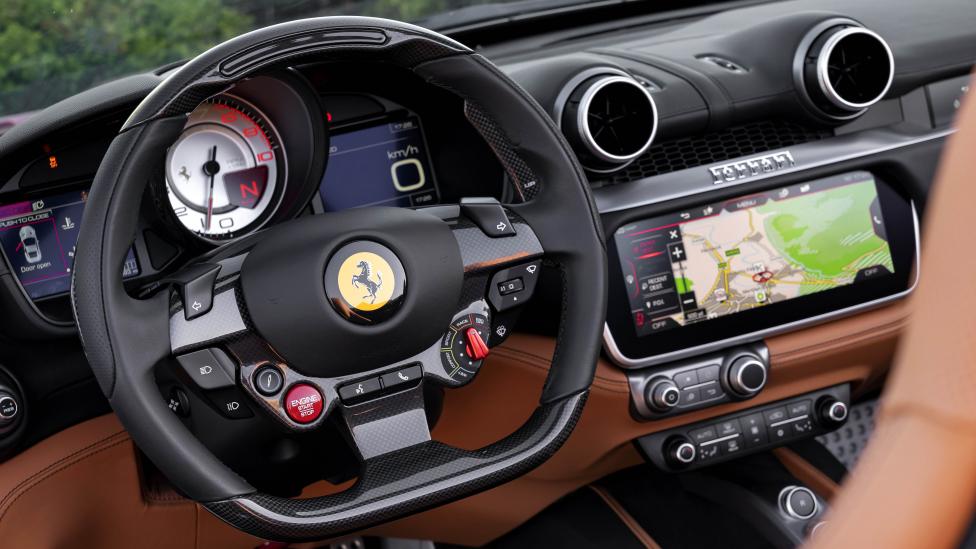