DS 9 review: the softly sprung French sedan is back 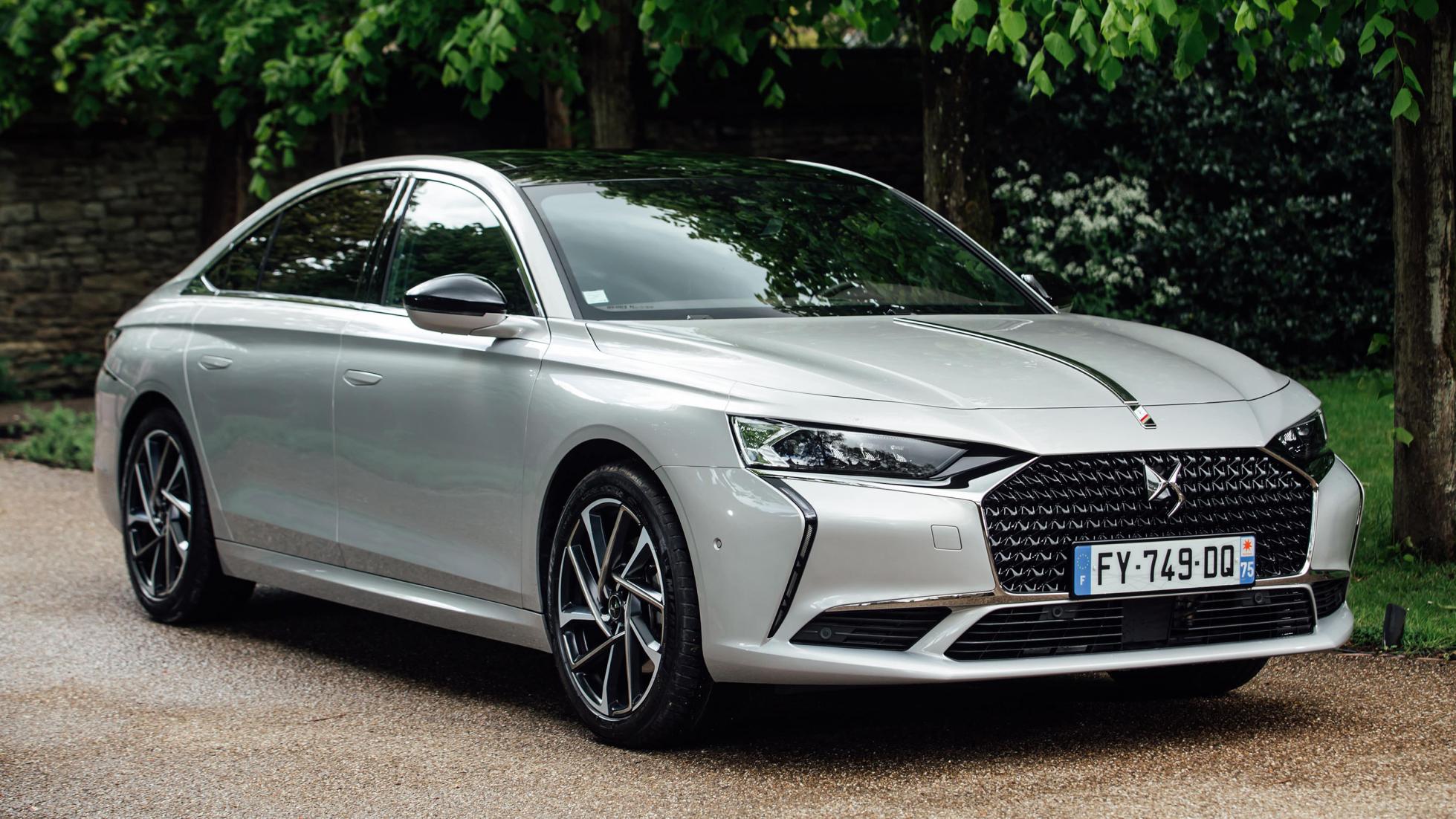 The DS 9 is the third model from Citroen’s deluxe offshoot brand, but unlike the DS 7 Crossback or the DS 3 Crossback, it’s the first designer-label French car for ages to shun the jacked-up crossover craze. Look, it’s a perfectly conventional four-door sedan car. Remember those?

Sizewise, the DS 9 is a nailed-on rival for the dominant BMW 5 Series, Audi A6 and Mercedes E-Class… but even DS doesn’t think it’ll be squaring up to those guys in a straight fight.

The game plan is to nick a few hundred sales from the Jaguar XF and Lexus ES, and provide a French-flavoured alternative for anyone who’s on their sixteenth Merc and fancies a change.

Three powertrains are on offer, and diesel is nowhere to be seen. How the times have changed, eh? Choose instead between a 1.6-litre petrol four-cylinder good for a heady 222bhp, or a plug-in hybrid that teams a lesser petrol engine with an e-motor. It also adds up to 222bhp, but with a useful 55 kilometres of claimed all-electric range. Topping the range is the 355bhp plug-in 4x4 set-up found under Peugeot’s 508 PSE.

While the DS 9 shares its under-the-skin foundations with Peugeot’s impossibly handsome 508 – which is also available with a fleet of hybrid drivetrains – the not-a-Citroen is longer and somehow more subtle.

The droopy front LED motif and big Audi-esque grille give it some snarling road presence in your prey’s rear-view mirror, but despite lashings of chrome and intricate lights, the 9 isn’t immediately gorgeous. It’s not an ugly car, but it seems to be trying quite hard to be inoffensive. And surely a DS should be wantonly mad and obviously stunning? Seems odd that Peugeot’s cheaper sedan is the palpably more seductive machine.

DS hits back on the inside, with a lush cabin that’s familiar from the DS 7 Crossback, but somehow feels more upmarket when not jammed into a jumped-up hatchback.

Front and centre, a 12-inch touchscreen. Behind the (regular-sized) steering wheel, 12.3 inches of fully digital instruments. The metal window switches live on the centre console, while the well-trimmed leathers and fillets of flashes of metal ramp up the perceived quality.

Sales targets are modest: DS wants to sell a few hundred in the UK, while a future as a French state car surely awaits across the Channel. Can it set a president for the return of big French cars? No? Merde.

So what if it doesn’t apex with the Nürburgring-conquering verve of a 5 Series? You might not arrive quite as quickly as you would in the BMW or Jag, but you’ll probably alight more chilled then when you climbed in.

It’s commendably quiet inside thanks to laminated double glazing, with no obvious wind rustle around the mirrors and less of the road-roller tyre roar you’d get in a firmer-riding rival. Obviously keeping the engine off for half the journey helps keep noise levels down. So, you’ll be wanting the E-Tense plug-in hybrid then.

We went with the middling version, got a disappointing 27 kilometres of EV range versus a claim of over 50, and combined economy of 2.5l/100km when the battery was charged, against 7.4l/100km when it ran flat. 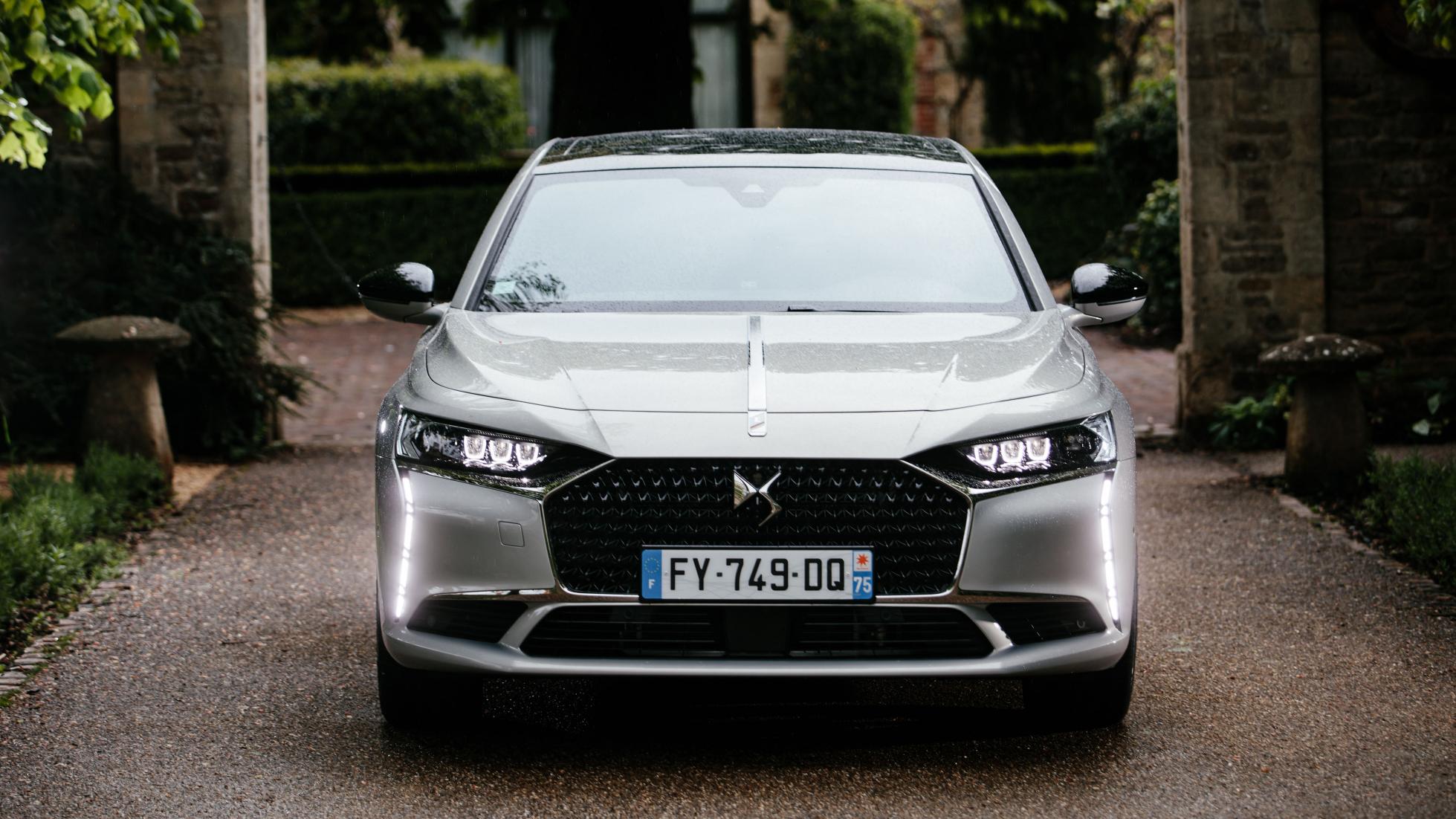 The engine’s a little too buzzy when roused, but nothing about the 9’s wafty demeanour encourages time-saving driving: this is not a fun or even a memorable car to drive. So, the game becomes driving like you’re taking a royal chauffeur job interview, trying to make progress as swiftly as possibly while keeping engine revs low, or absent entirely.

The switchover between power sources is smooth, and the brake pedal doesn’t fidget and fix as the car chooses between regen-braking and old-fashioned discs. Apparently nous from DS’s championship winning Formula-E team has been helpful here. Sounds like marketing guff, but we’ll give them the benefit of the doubt.

After all there’s nothing ‘Motorsport’ about a BMW 520d, but most of them are still plastered with ‘M’ badges… 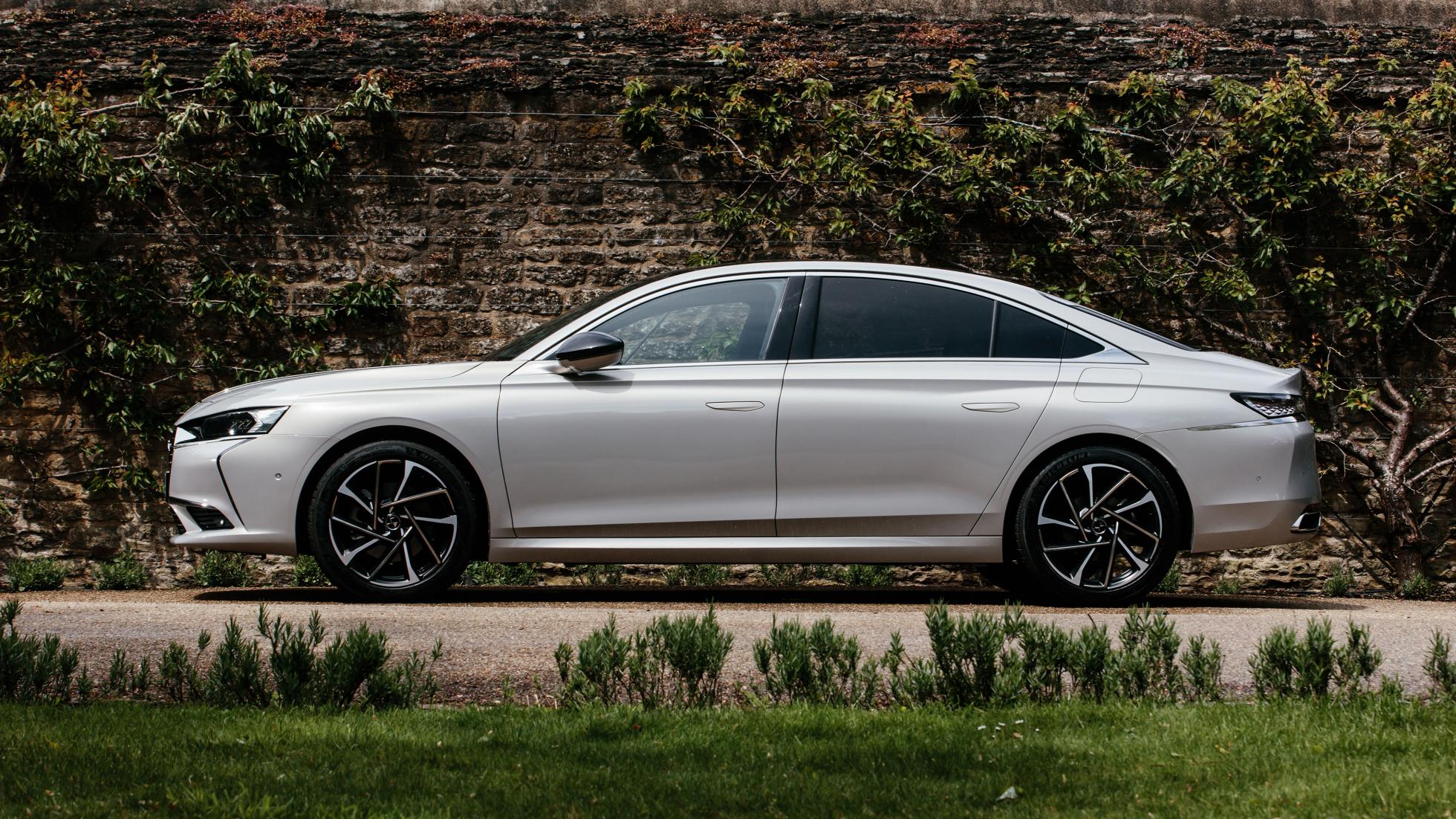 At first this all seems very familiar from the DS 7 Crossback. But that’s not exactly unusual in this class of car – a BMW 5 Series has a very similar cabin to, say, a BMW X5.

It’s much less businesslike than any of the German rivals inside, and that alone makes it more welcoming. The DS 9 cabin feels like a Tesla concept car, just from the 1970s: somehow minimalist and kitsch all at the same time. Insist your fleet manager bumps you up to the ‘Opera’ spec upholstery, enveloping you in rich-feeling, expensive-smelling Nappa leather instead of the incongruously sporty Alcantara.

While cousin-brand Peugeot is allowed to be the maddest of the French brands and go crazy with its shrunken steering wheel, mad graphics and multi-deck dashboard surfacing, DS likes things a little more reserved inside.

You look through the steering wheel to read your speed, not over it. Ergo, the driving position is better sorted. Oh, and that steering wheel itself? Hand-stitched, that is. Each one takes 45 minutes. The ‘pearl’ stitching motif on the doors has taken three years of R&D to perfect.

There are no heater controls. That’s a sub-menu in the touchscreen, which is familiar Peugeot-Citroen fare, and could do with a graphical and processor update to be the state-of-the-art centrepiece this cockpit deserves.

Below said screen are shortcut keys for the menus. Above lie vents, and the weird rotating B.R.M timepiece that DS is so fond of. It rotates in and out of view when you press the oddly sited starter button just below… every time you enter and exit the 9. It’s a slightly bizarre gimmick, but also one of the only true examples of old-school madness that exist in this new-age French luxmobile. So, it falls just on the right side of ‘the charming/annoying’ see-saw.

Based on a stretched version of the platform that brought you Peugeot’s stunning but cramped 508, the 2900mm wheelbase carves out plenty of space for grown-ups front and rear. The long glasshouse gives the cabin an airier ambiance than you might expect, while the boot is a competitive size and pleasingly features a hidden stowage cubby for the E-Tense’s charging cables beneath the floor.

If this car had an Audi badge on the front, it would sell by the heap. BMW shifts 14,000 5 Series annually, in a good year. In a single week, BMW would hope to sell most of what DS is going to shift in 12 months.

That puts into perspective just how modest the expectations for the 9 are. DS is being realistic. This isn’t going to be a volume-selling machine that rocks continents and shifts the car world on its axis. It’s a hyper-alternative choice.

So, if you like rarity, you’ll be especially interested, given this will be a scarcer sight in the UK than any Lamborghini. Naturally the dealer network is much less prevalent than the big players too, but DS prefers to operate in boutique stores than out-of-town car lots.

For retail buyers, you’ll be able to manage a DS membership via an app that allows you to rent different products within the DS range for, say, your family holiday, or a visit to a city when plug-in ability is a boon. But three quarters of the DS 9s you do spot will have been bought as company cars, not private purchases.

DS 9 trim lines are mercifully easy to decipher. There’s no such thing as a bottom-of-the-range model: all are highly specced. Things kicks off at just over £40k (RM229k) for a Performance Line+ with the non-hybrid engine. The other, plusher trim level is Rivoli+, which sounds like a Lidl brand of posh pasta but actually blesses the 9 with air filtration and road-scanning cameras which pre-emptively soften the suspension when a pothole is sighted.

We found finance deals online stretched from £780 (RM4.5k) to £900 (RM5.2k) per month across the range, based on 16,000 kilometres a year over three years with a 6-month deposit. A German exec sedan is a little over half as much money per month. Vive le difference and all that. 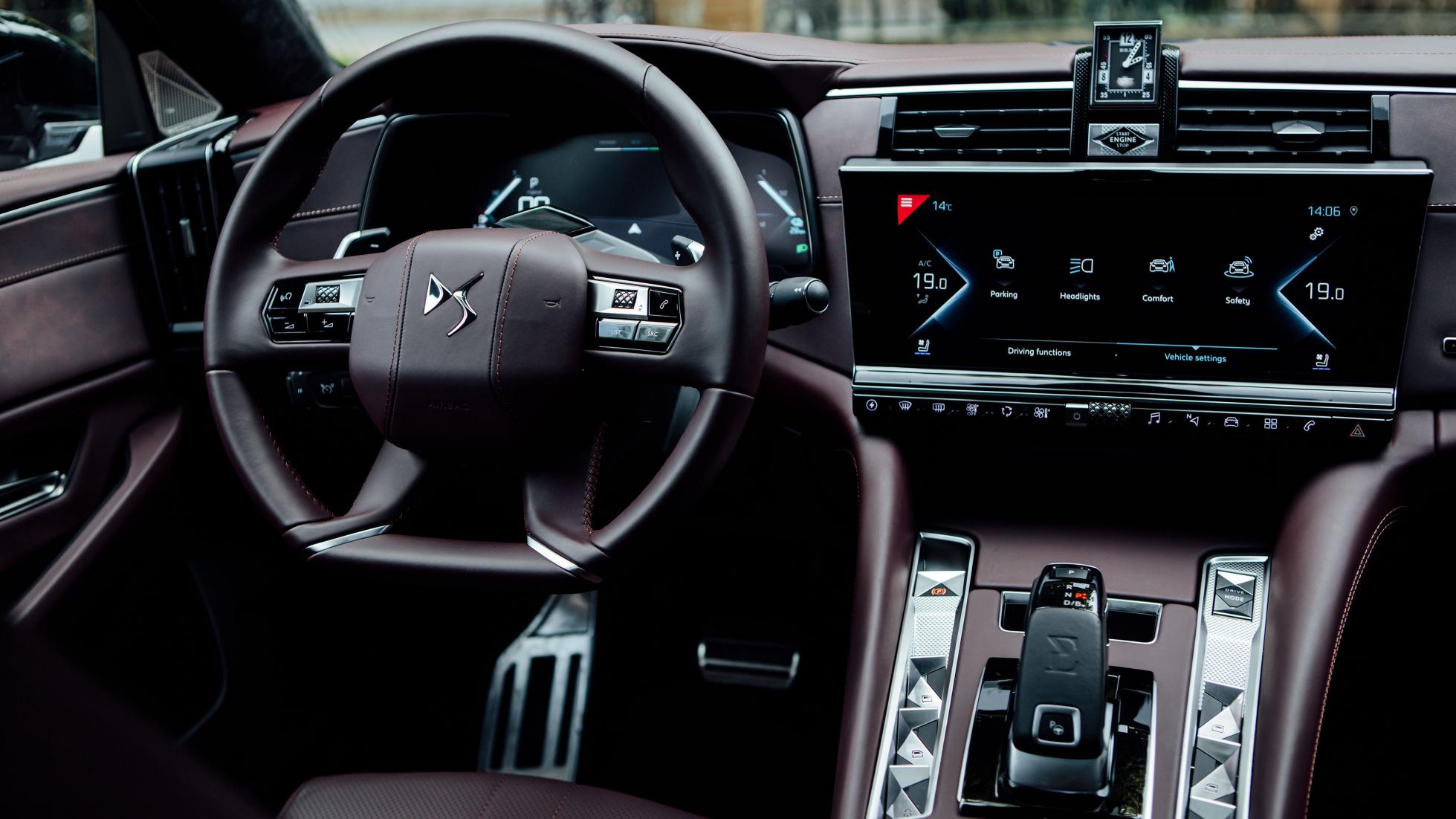 "The most convincing DS. Tried all the German best-sellers? Here’s a thoughtful alternative"

The DS 9 brings out into the light the strange contradiction at the heart of the whole DS brand. What, exactly, is it for?

Is it supposed to channel the spirit of the original Citroen DS, which was one of the most technically advanced, forward-looking cars in history? If so, this DS 9 isn’t ambitious enough. It’s competent and well-considered, but ultimately not-at-all technologically ground-breaking.

If, then, DS is supposed to be a masterpiece of design, why is Peugeot churning out a wilder-looking range of cars at the moment? It almost feels like the badges got mixed up at the factory and Peugeot’s wacky-interior’d 508 should’ve been the DS contender. See also: the Citroen C5X.

DS argues it’s a premium brand: Louis Vuitton on wheels. And we can at least agree the world definitely doesn’t need any more firm-riding schports sedans – ‘comfort’ is the new ‘Nürburgring lap time’ if you want to stay sane in the twenty-twenties. Here is where the 9 starts to find its niche. Because it’s the least sporty sedan car money can buy, it will have a rare-groove appeal for anyone disillusioned with modern obsessions over alloy wheel size and brittle damping uber alles.

Now the engineers have turned out a squishy, polite hybrid sedan, it’s going to be up to the marketing and advertising sorts to actually convince you it’s high time – for the first instance in a generation – to drop 40 grand-plus io a big French car, not a Lexus ES or a Volvo S90.

DS top brass concede this flagship – despite boasting all the tech you get from the Germans, all the space, and superior refinement – won’t make a pinprick in Audi or Mercedes’s profit margins, let alone a dent. But if you’ve tried all the usual suspects, and you’re after a change from the norm, this is the most convincing product from DS yet. 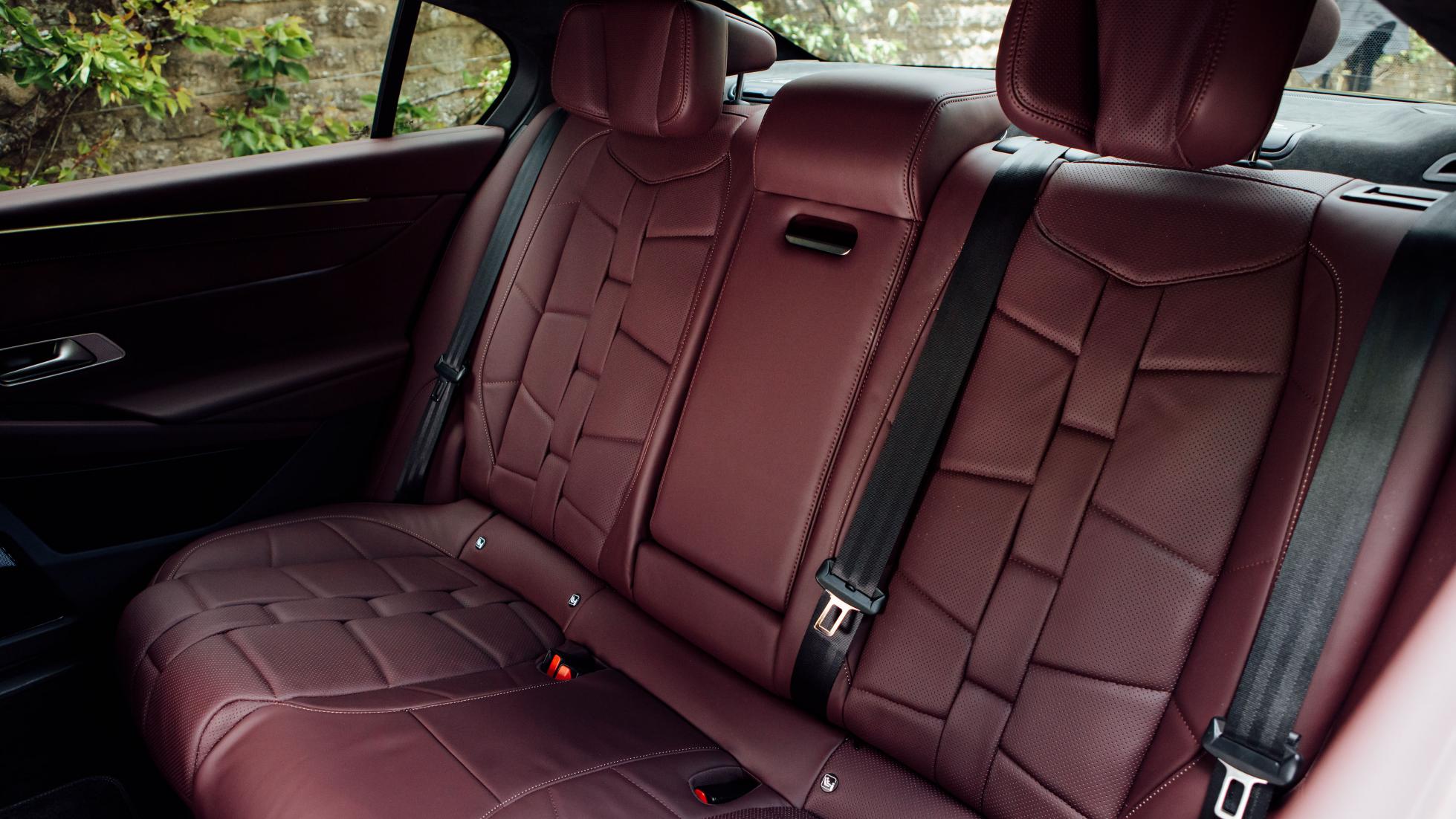 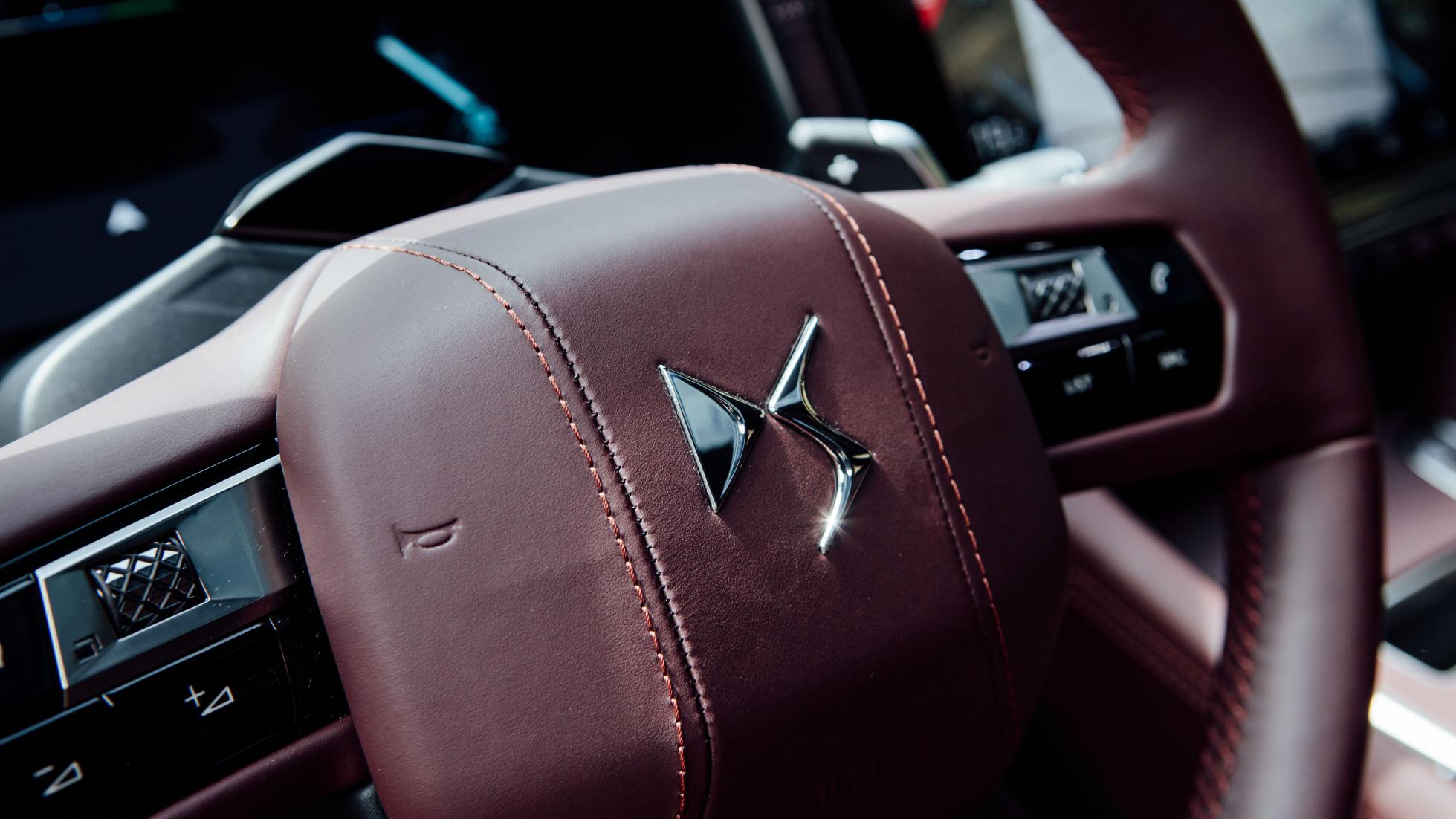 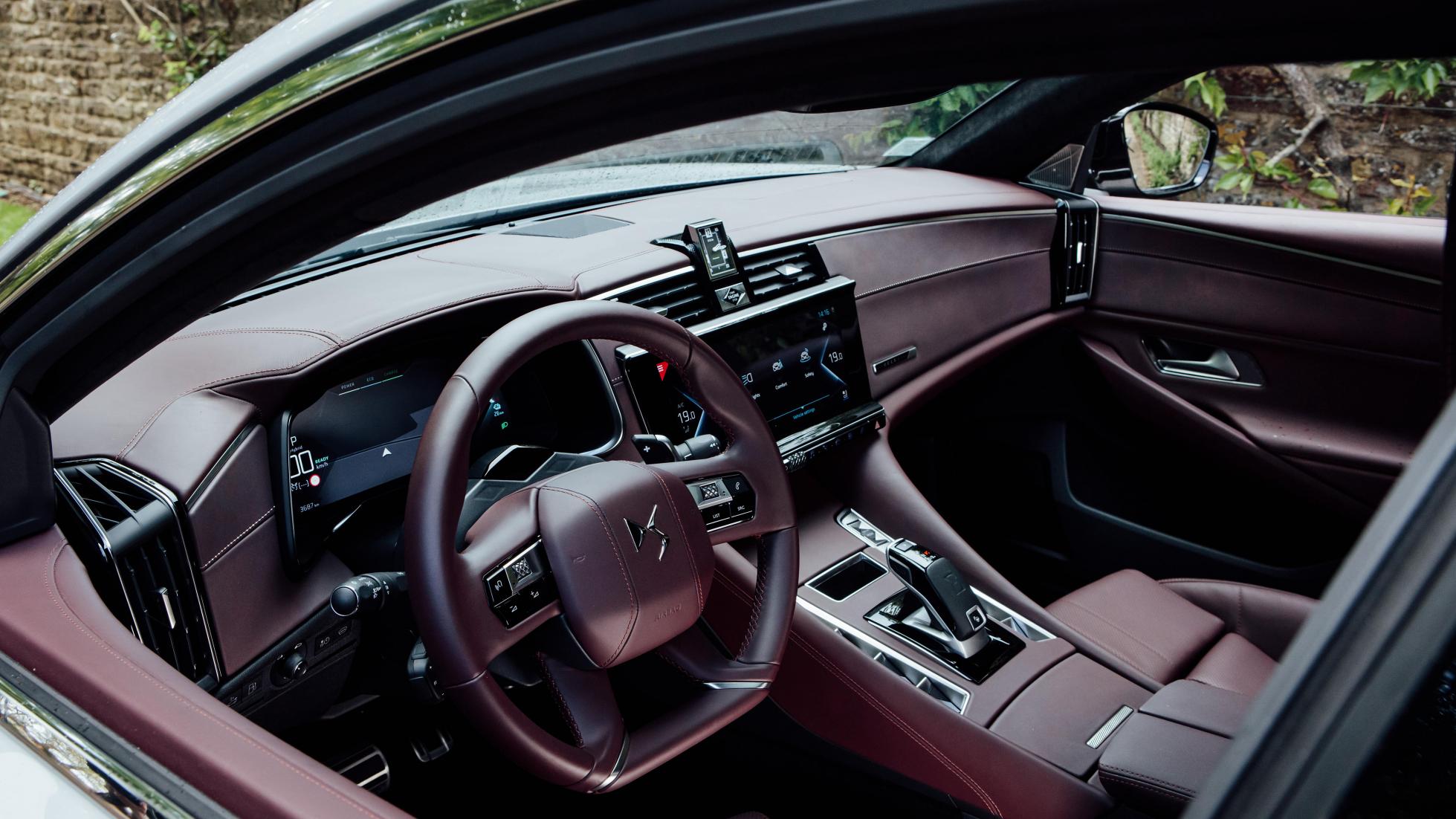