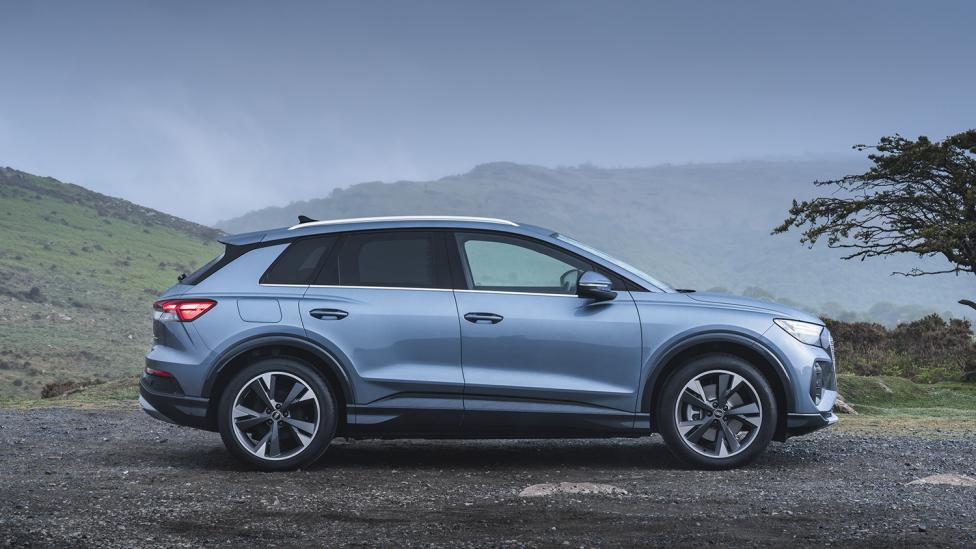 This is Audi’s new small electric SUV. It sits between the Q3 and Q5 in Audi’s increasingly complex range of SUVs – 10cm longer than the Q3 (4cm shorter than the Q5), a smidge taller and wider, but with a smaller boot, thanks to its pesky batteries. It’s also £10k (RM57k) more expensive thanks to its pesky batteries, so Audi needs to put some effort in to make the Q4 e-tron feel a bit more special.

The Q4 e-tron also comes with a sleeker Sportback version of the car with a more sloping roof and a jaunty hatchback. For a slight premium you can get slightly reduced practicality. Funny how that works.

That’s the other way to look at the Q4 e-tron. It shares its undercrackers with the rest of its Volkswagen family and it’s built on the MEB electric platform that has been deployed across the company. Essentially it is an Audi-skinned version of the ID.4 and it’s even built on the same production line as the VW in Zwickau – they really are a close family. But Volkswagen’s electric smarts combined with Audi’s interior panache? Colour us interested. 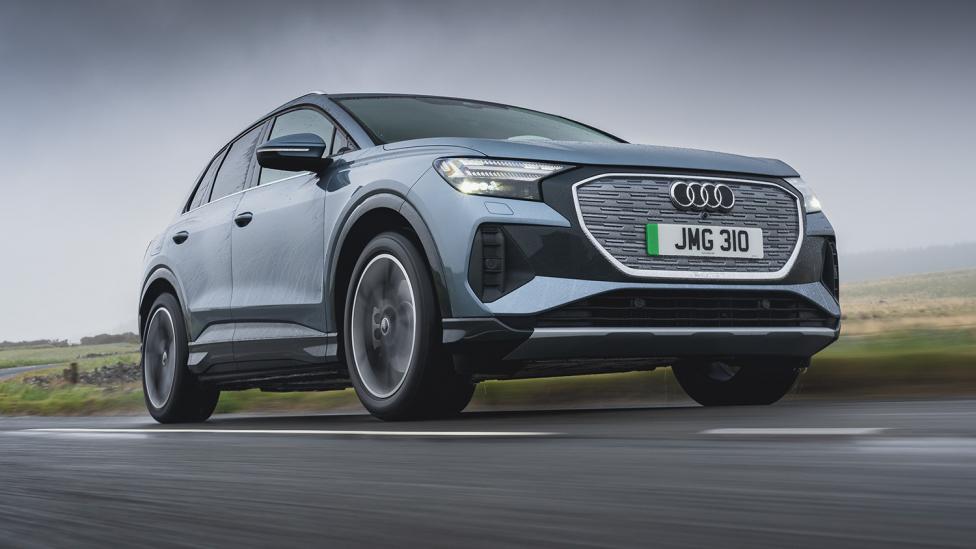 WILL I BE STUCK FOR AGES CHARGING?

Rapid charging comes as standard on the Q4 e-tron, so if you’re in a rush, the batteries charge up to 100kW DC with the 52kWh option and up to 125kW with the 77kWh version. The latter will get you from 5 per cent charge to 80 per cent in 38 minutes, adding 130 kilometres of range in 10 minutes of charging. Just enough time to grab a coffee and steel yourself for the next part of your journey.

SO WHAT SETS THE Q4 APART FROM THE OTHER VWG CARS?

Perhaps not the car’s looks – the Q4 is fairly handsome and well proportioned, but from the side you’d be hard pressed to recognise it as an Audi. There are clear benefits to the disciplined platform sharing that the Volkswagen Group has introduced, with the downside being that it’s clearly tough sometimes for the different brands’ designers to carve out a unique identity. Still, they’ve done a marvellous job on the inside of the Q4 e-tron, with an angular interior that showcases the solid quality that we’ve come to expect from Ingolstadt.

What physical buttons are there all move with a pleasing tactility, and the driving experience communicates a sense of solidity. The pedals are all well weighted and the steering is firm and accurate. Audi’s done a good job too of disguising the car’s heft, with a well damped ride that mostly smooths out the road’s imperfections. 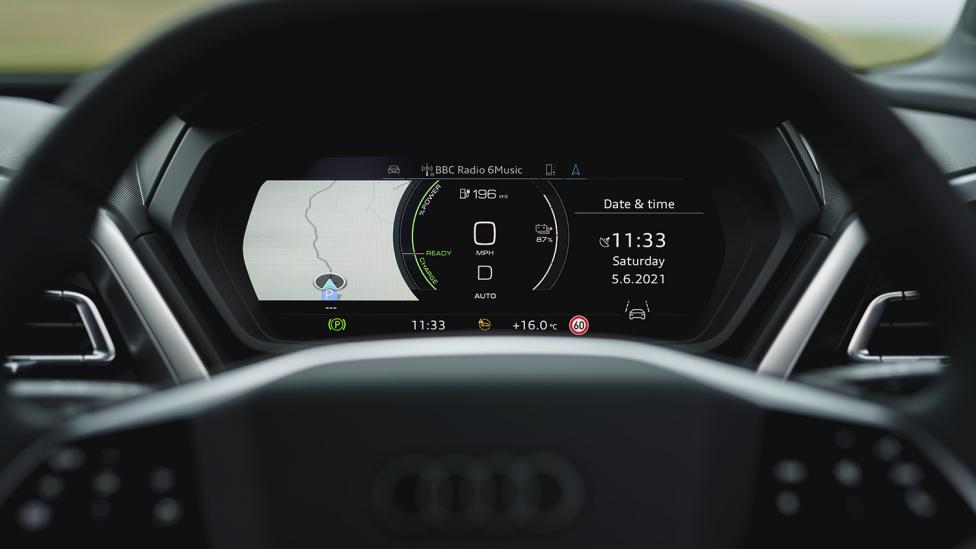 YOU HAVEN’T MENTIONED THE TOUCHSCREEN YET…

We don’t like to go on about these things for the sake of it, but with a company as relentlessly competent as the Volkswagen Group, it’s very surprising when it wanders as astray as the carmaker has with its latest generation of interior electrics.

Audi has managed to avoid the worst of VW’s electronic excesses, retaining a smattering of useful buttons in the cabin, but the infotainment is still a touch laggy, the phone connection occasionally unreliable and the whole thing randomly prone to freezing. In this bright new age of over-the-air updates it’ll probably be sorted soon enough, but such imperfections are a measure of how reliable the company has always been.

“Decent powertrain happily takes a back seat to dependable quality. This is where the electric vehicle hits the mainstream”

The Q4 e-tron truly heralds the next generation of electric vehicles – not because of any new technology, or space age looks, but rather in its overwhelming ordinariness. Sounds like we’re damning with faint praise, but this is a genuinely interesting moment – Audi thinks that it’ll shift 20,000 of these in its first full year on sale (2022), catapulting it to second place in the company sales charts behind the A3. This is the moment that the EV reaches the mainstream.

The Q4 e-tron’s success will come because it is relentlessly capable – easy to live with as a car full stop. If you’re making the switch to electric it’s a great place to start, a nifty blend of EV glamour and SUV practicality.

The small SUV is the best blend of big-enough-to-squeeze-in-a-load-of-batteries and small-enough-to-be-manageable and gingerly sidesteps the inherent tension in going electric to try and save the planet but doing it in a ginormous SUV. There’s enough range here too that you can forget about the driving and cut loose a little.

The Q4 e-tron is the perfect car for those punctual adopters who have watched others try things out. You’ll probably still get on better with it if you’re able to charge at homeo.

Audi has never quite been able to decide whether it’s supposed to build racy cars or smooth and refined ones. It usually manages the balance quite well, and electric powertrains offer the ideal opportunity to blend those traits, thanks to the instant slug of torque that e-motors offer.

So the Q4 e-tron offers a smooth ride – it’s well damped, but can get occasionally fussy as you drive over small ridges and other bumps, delivering a short sharp shock into the cabin – but it can hustle too, staying flat and clinging grimly on thanks to the low down weight of the batteries. 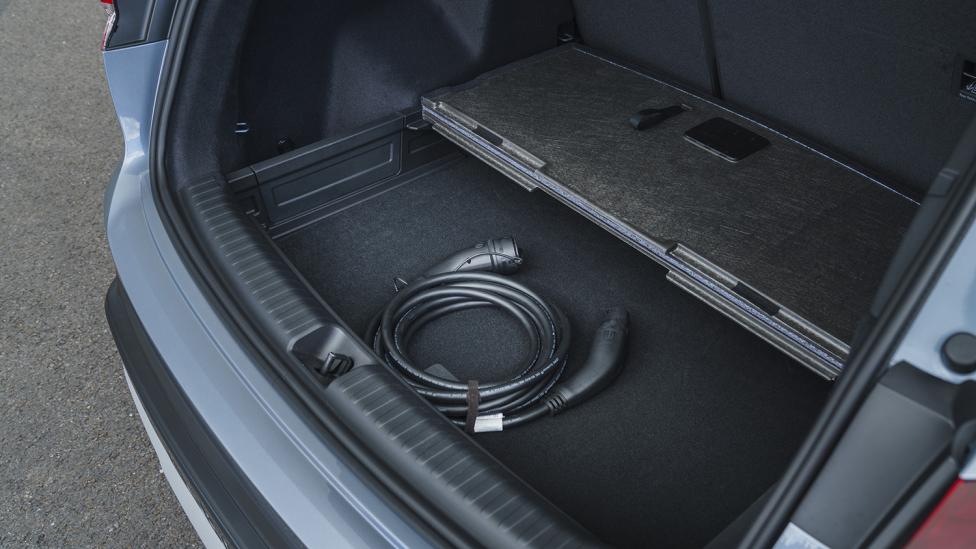 COUNTRY WAY OR THE MOTORWAY?

The Q4 e-tron is not a classic driver’s car – certainly more at home cruising than attacking B-roads – but the steering is firmly weighted and accurate, lightening up the further up the drive select modes you get towards Comfort.

The cabin is very quiet on the move, even the wipers are silent when it rains, and outside noise has been impressively muted. The problem with that level of noise reduction is that it shines a spotlight on squeaks and grunts from the rest of the car over bumps or round corners, but this Audi is properly screwed together. It’s silent enough to be awkward, so remember your conversational cue cards.

One of the most useful features on the move is regen braking, controllable through flappy paddles behind the steering wheel. This set-up is optional on Sport and S Line models, and comes as standard on Edition 1 and Vorsprung cars. It quickly becomes second nature, flicking left and right to vary the car’s rate of regeneration when you come off the, er, gas. 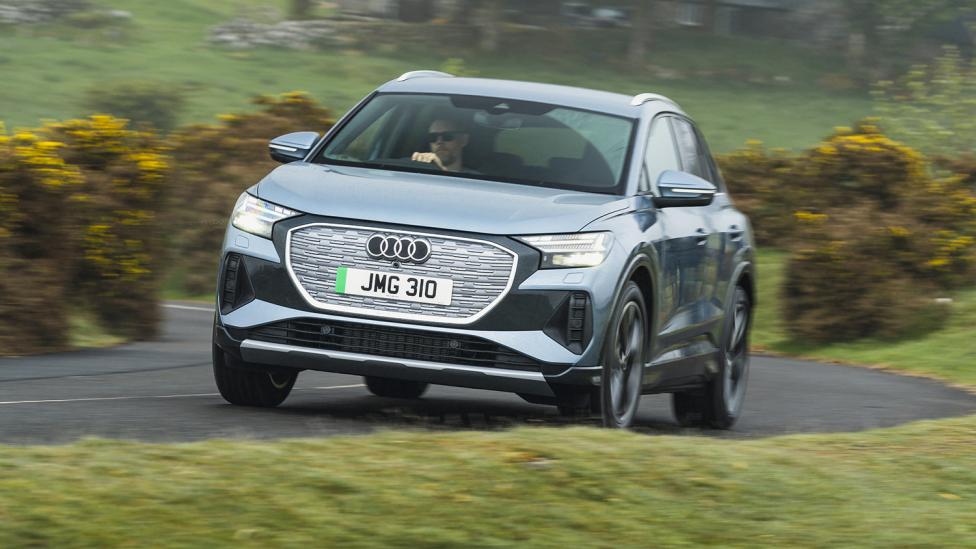 The interior of the Q4 e-tron is predictably high quality, and even base-spec Sport models get a decent kit list with three-zone aircon, heated front sport seats and a fancy multifunction steering wheel.

On the latter, the Austin Allegro is sat weeping in its grave at the injustice of it all – the likes of Audi introduce a square steering wheel and suddenly it’s cool. In fact, Audi has managed a solid job of keeping the Q4 e-tron’s insides on brand while simultaneously giving them the sort of angular, glossy look we’ve come to hope for from these machines of the future.

It’s a pared back interior, mind. The gear selector is a tiny button that you push forwards or backwards to make your choice, flanked by the start button, an iPod-style controller for the infotainment, Audi Drive selector at the back and a button to turn the ESP off. Otherwise that’s your lot. There’s a reasonable amount of storage, but covered cubbies are limited to the glovebox or a deep central bin under the armrest. If, say, you wanted somewhere to hide your swipe cards for four or five different charging networks you’d struggle.

The boot floor is set quite high, but there’s a decent sized compartment underneath the floor in which you can squirrel away your cables and detritus. Overall the boot is a good size, offering a chunk more space than electric rivals such as the Volvo XC40 and Mercedes EQA.

We can’t avoid talking screens here, and the Audi offers a 10.1-inch touchscreen display in the middle and a 10.25-inch virtual instrument panel behind the steering wheel. The Volkswagen Group has gone a little astray with its electronics, and the Q4 e-tron does suffer here, but less so than in other cars we’ve driven. We criticise these things because the company clearly takes such pride in the details – the control stalks on the steering column are perfectly sculpted for a fingertip flick, and the carmaker long ago pioneered cheeky little details like holding down the unlock button on your fob to open all the windows. The imperfections here only serve to highlight how consistently high performing Volkswagen’s output has been for a long time. 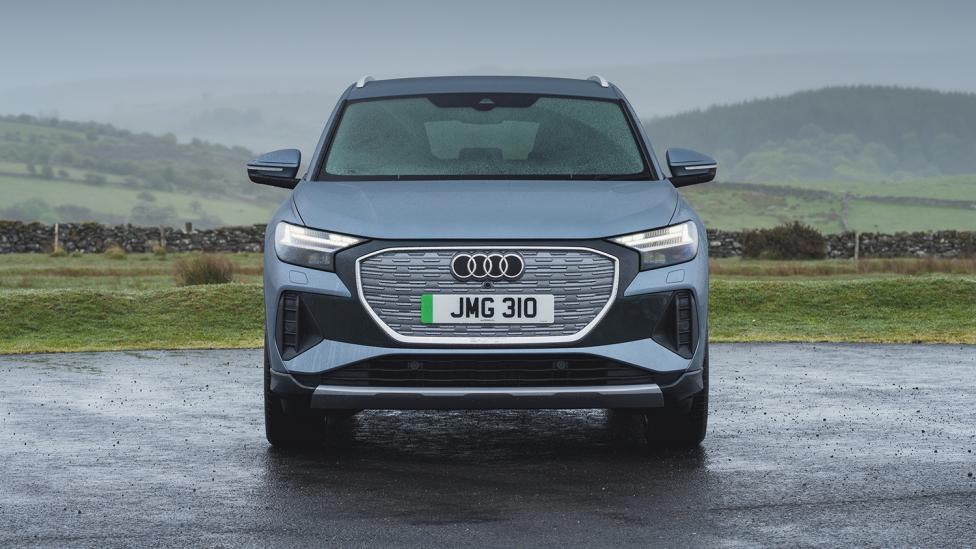 So, which Q4 e-tron to go for. The 40 is expected to take the lion’s share of sales, offering a tempting mix of the larger battery at a cheaper price, and Audi expects the standard version to outsell the Sportback. The Sport spec is on balance the best one to pick – anything higher up the price list is essentially just adding pretty things rather than anything particularly useful. This is also the model that offers the best range.

There are various packs and options to whack on top, but the heat pump is a must-have, because it helps minimise loss of range in cold weather when you’re running the heating. Prices start at £40,070 (RM229k) for the 35 e-tron Sport, up to £65,070 (RM373k) for the 50 e-tron quattro Vorsprung – something for every wallet.

Of course, Audi expects that you’ll be looking at other posh EVs when considering the Q4 e-tron. A Mercedes EQA will cost around £590 (RM3.4k) a month for a 2WD 250 with a 66kWh battery, while the Volvo XC40 Recharge and its 78kWh is a pricier prospect at £670 (RM3.8k) a month. Its cousin, the Polestar 2, can be had for £550 (RM3.1k) a month in Long Range guise with a single e-motor. All these cars can be had on 1 per cent BIK rates if you’re looking for a company car, which definitely makes them worth looking at. The Audi has the biggest boot, the Volvo is the quickest, the Polestar is the coolest and the EQA is the Mercedesest.