Rather depends where you’re perched on the cynicism scale, really. If you’re Aston Martin, this is the most viscerally exciting, uncompromising car the company has ever produced – until the Valkyrie finally lands.

If you’re a serial hypercar collector, this is your next al fresco wealth-carriage, ready to fill that gap in your collection alongside your Ferrari Monza, McLaren Elva, Bentley Bacalar, and McLaren-Mercedes SLR Stirling Moss.

And if you’re not either of those things, you’re scoffing hard at the preposterous idea of a 700 horsepower (okay, 691bhp) V12-powered two-seater with less weather protection than a Himalayan goat-herder. Tricky to make a rationale case for this car, y’see.

The V12 Speedster has no roof, no option of a roof, and no mounting points for a roof. It has no windows. And instead of a windscreen, each of the twin cockpit segments are protected from the onrushing hurricane by nothing more than a glass aero ramp that looks like it was pinched from a First World War biplane.

Sensibly, Aston Martin has limited the car’s top speed…. to 300kph. On the way, it passes 100kph in 3.5 seconds. Which means it could be lunched at the lights by a BMW M3.

This is by no means the fastest car in the world, or even in Aston’s stable. It doesn’t need to be, because as you found out the first time you ever rode your bicycle down a really big hill, going 40-50 kilometres an hour without face protection is more than enough to dry your eyes into bloodshot ping-pong balls and shove a bluebottle up each nostril.

Given you no longer get trifling luxuries like wipers, sun-visors, window motors or a rear-view mirror you’d expect Aston to have reflected these savings in the price. And they have. The V12 Speedster starts at £765,000 (RM4.4million), including tax. If you want it in this special Fifties DBR1 racer-homage livery – or the military aerospace F-18 paint job also on the menu – then you’re unlikely to be getting much change from eight hundred grand (RM4.6million).

Indeed, the V12 Speedster is a conspicuous bargain. Despite costing around three times as much as an Aston Martin DBS Superleggera Volante – which is actually more powerful – the V12 retails for half as much as the Ferrari Monza, McLaren Elva, or Bentley’s Bacalar. Welcome to the Reasonably Priced Speedster.

What’s more, the Aston is a rare machine: only 88 will be produced, versus 500 Monzas, 149 Elvas and many thousands of DBS or Vantage soft-tops. You’re almost certainly going to the be only person in your tax haven to get one. And as of spring 2021, they weren’t all sold…

So, if you’re twiddling your debit card between your fingers and wondering whether to click ‘Add To Basket’, allow us to talk you through exactly what to expect from Aston’s V12 hairdryer.

Did you bring a helmet? Oh. Well you best pop back inside and get one then. And if it’s an open-face, then have a pair of ski-goggles handy. Or your great-great-grandad’s flying hat. Don’t even think about going for a pootle in your V12 Speedster without some headgear.

Once you’re suited up, you’ll need to get settled in. The usual flush Aston door release pops open a slab-sided but lightweight door. You fall inside onto a slender carbon seat that has minimal padding stuck where your squashy bits need to sit. It is, however, more comfortable than it looks. And it’s heated. Result.

Tug the door closed with the tan hide (there’s more leather strapping in the Speedster than Anastasia Steele’s understairs cupboard in here) and drink in the view. To get an idea of what it’s like, go and grab your PlayStation’s simulator steering wheel and then lie down in the bath.

The V12 Speedster’s beltline and scuttle comes up to your ears, and there’s worryingly little sense of whereabouts on the horizon that mighty nose might end. The door mirrors are useful, but there’s no rear-view mirror, and the double-hump buttresses behind cancel all rearward visibility. Aston has fitted a reversing camera, but it should have bolted in a periscope.

Ahead, the only piece of protection between you and the category five hurricane that’s about to perform a Euro NCAP crash test directly into your face is a small glass aero screen. That’s it. No ducts, no fans. You simply share the windrush you generate with the 5.2-litre twin-turbo V12’s hungry appetite.

It’s a mighty engine, over-endowed in torque everywhere in the rev-range, but criminally, you can’t hear it beyond trundling pace. Redline this monster in second and the wind rush out-shouts the engine.

This, for me, is the greatest crime of the speedster as a genre. You’d imagine jettisoning the windscreen would turn the vehicle into a no-filter engine-appreciation theatre with you in the royal box. Instead, it might as well be electric. Want to bathe in the barrel-chested roar and overrun crackle? Save yourself half a million quid (RM2.9million) and bag a DBS Superleggera Volante. 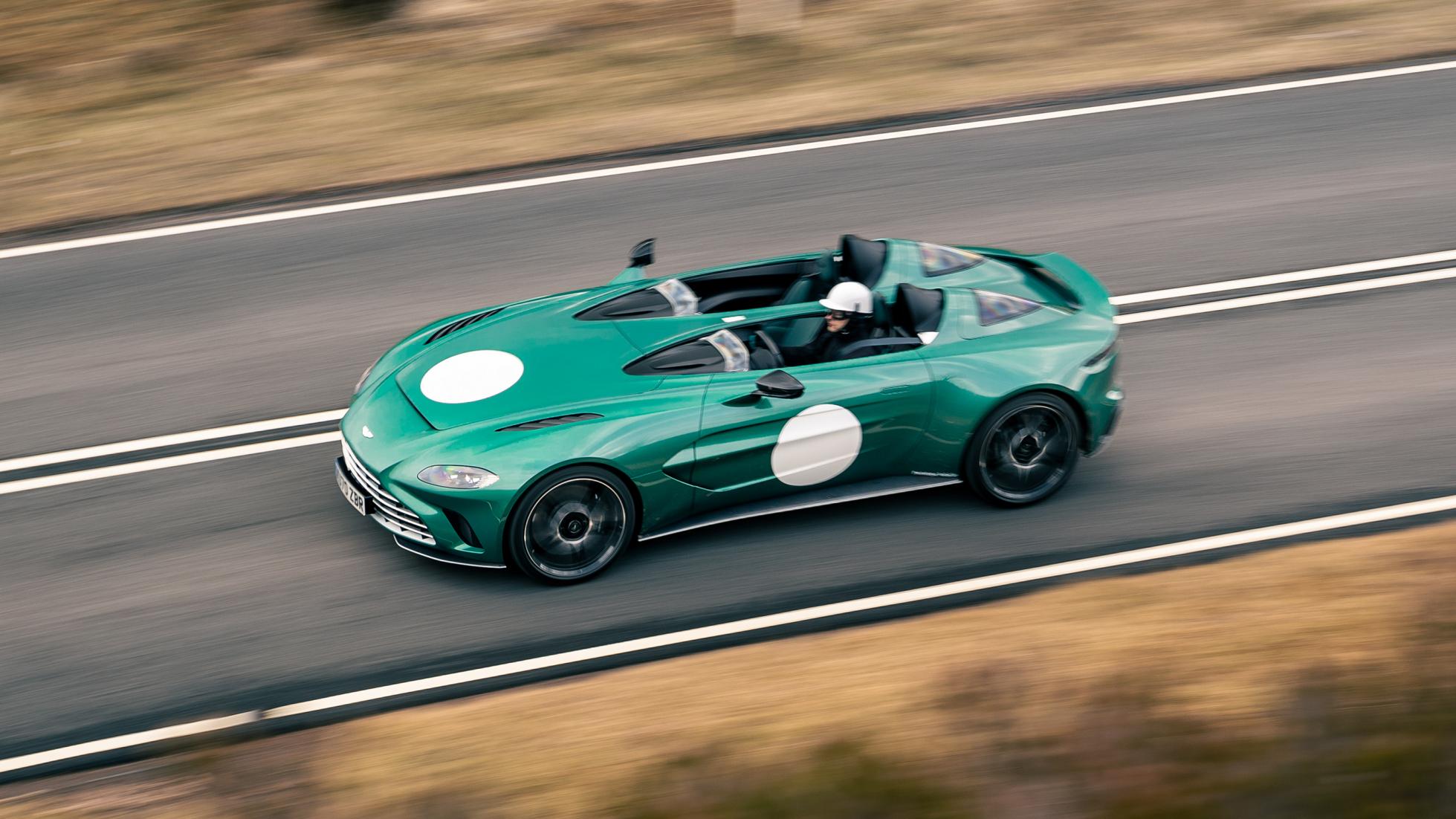 Unable to hear the revs rise and fall, you’ll at least be less aware the Aston’s eight-speed auto slushbox is far from the sharpest paddleshifter around, though there’s so much grunt here Aston could’ve got away with a BMX bike’s single-speed chain drive. It’s happy enough left in auto mode, harnessing the avalanche of boost.

As per usual, Aston’s got its carbon brake feel spot on. The Speedster is arrested by enormous 410mm front discs, with 360mm rotors out back. They live inside centrelock wheels with a lugnut that needs a giant’s wrench to undo.

So what about handling? Well, this is a surprise. The V12 Speedster is comfortable. Softly sprung, compliant, and weirdly easy-going. It’s inherited Aston’s deft but rather light steering. Gone is the meaty feel from the old hydraulically-assisted cars, replaced with a Ferrari-like daintiness, albeit without the ‘sneeze and you’re in a tree’ sensitivity.

I suspect Aston’s done this to disguise the ugly truth: the V12 Speedster is not light. How a carbon-bodied clownshoe ends up at 1,765kg has a lot to do with the sheer mass and plumbing of that massive engine you can’t hear.

So, you have to be a bit patient on turn-in. Pour the car into a bend, trust it’ll bite, then steady on the gas because blimey, even with all the electronic safety nets set to ‘Maximum Wally’, it’ll spool up both back tyres in a heartbeat if you’re greedy and deploy the boost before the traction control gets its boots on.

However, once you’ve found a dry road and generated some tyre temperature, the V12 Speedster gels. You learn to stay in third for any sort of bend. You learn that just because you’ve got 691bhp, you needn’t use all of them. Aston says this car’s inspired by 1950s Le Mans racers, but think of it more like a land borne, wing-clipped Spitfire: a giant engine and delicate balance. Don’t forget your goggles. 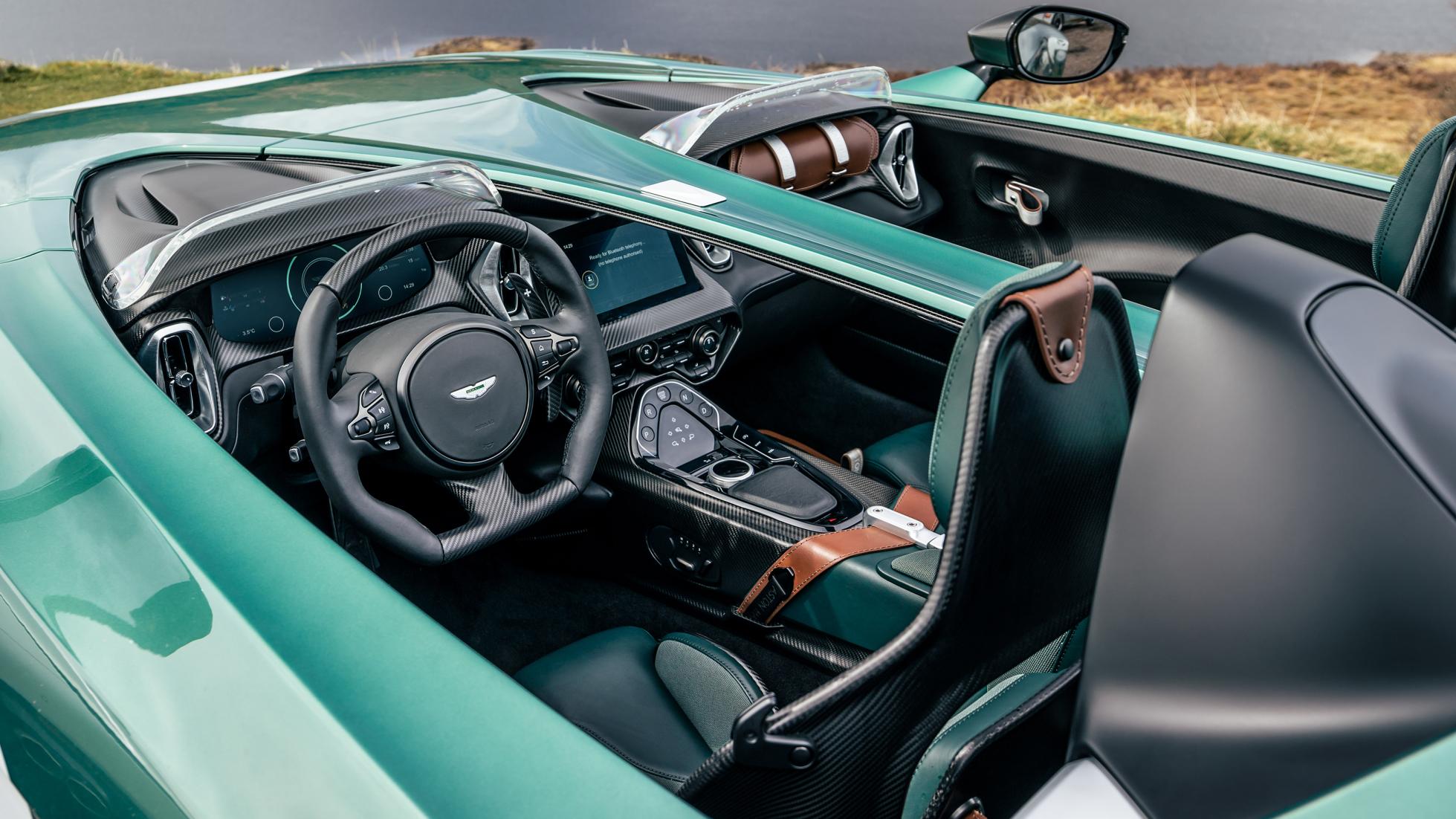 I’m not sure the V12 Speedster really has an ‘inside’. Though, you do feel very cocooned, with the high door tops and the carbon sinew rudely butting in between you and your brave passenger.

The basic architecture in here looks like it’s come from an Aston Martin Vantage – the buttons and heater dials and so on – but there’s lots that’s new and bespoke. Expensive-looking carbon fibre panels form the door inserts, punctured by waxy leather strapping for the door releases.

Because the new doors sport no buttons to operate the non-existent windows and the door mirrors, the latter’s adjustment controls have migrated to a touch-panel at the foot of the centre console. Works well. Happily, all the other switchgear has a tactile click to it. Useful when your fingers go numb.

The metal vents are new. They look much more expensive than the ones you get in a normal Aston. The leather-strapped storage pocket is a lovely touch. So are the thick alloy fixtures and fittings that give the car a real military-tough feel inside.

The infotainment is reheated Mercedes leftovers with an Aston skin. That’s no bad thing – the click-wheel operated system is easier to use than the latest Benz touchscreen, though the graphics are dated – and a slice of the screen is blocked by the cockpit spar. I guarantee you won’t care. You won’t need the nav – you’re only ever doing short loops for a jolly in this thing, and even a CIA-trained bloodhound couldn’t hear the Bluetooth phone connection beyond parking speed.

Okay, so what about practicality? No, really. Just because there’s no weather or insect shield, no security, no glovebox and no door pockets, doesn’t mean the Speedster couldn’t be deployed for the family camping holiday.

Under the rear buttresses there is indeed a boot, which any passing miscreant can see straight into through the glass humps. Don’t leave your Faberge eggs and Heart of the Ocean diamond in there overnight.

Meanwhile, there’s a void behind the slender seatbacks to store his’n’her’s crash helmets. But nowhere to stuff an umbrella.

In order to own one of the 88 V12 Speedsters being produced, you’re going to have to part with at least £765,000 (RM4.4million). That’s quite pricey compared to Aston’s other Volante fodder, but half as much as a Ferrari Monza or McLaren Elva. So we’re already onto a bargain.

You can spend the change on paint. Aston’s shown the car off in a blue-grey hue inspired by fighter jets, and the car in our gallery wears a DBR1-inspired heritage livery paying homage to Aston’s greatest 20th Century racer. Aston will no doubt flog you a cashmere car cover as well, but you might as well sling a cheapo Halfords car-condom in the boot. That’s the one you won’t mind getting wet.

We’re afraid it’s not going to be cheap to run: the V12 swigs fuel even when you’re not peeling back your eyelids with the wind. And no, there isn’t a plug-in hybrid version.

Oh, and one last thing. If you’re cynically eyeing the V12 Speedster and thinking ‘pah! I’ll hold out for a V12 Vantage, thanks’ then Aston might have seen you coming. Because while this car has Vantage lights, Vantage interior fittings and even feels quite Vantage-y to drive, Aston says this is not merely a V12 Vantage that’s lost an argument with a low bridge.

Gaydon says “utilising Aston Martin’s latest bonded aluminium architecture, the V12 Speedster utilises elements from both the DBS Superleggera and Vantage model lines to create its own unique platform”. So, while we hope the V12 does find its way into Aston’s smallest car before the electric era begins, don’t bet your very, very, very large house on it just yet. 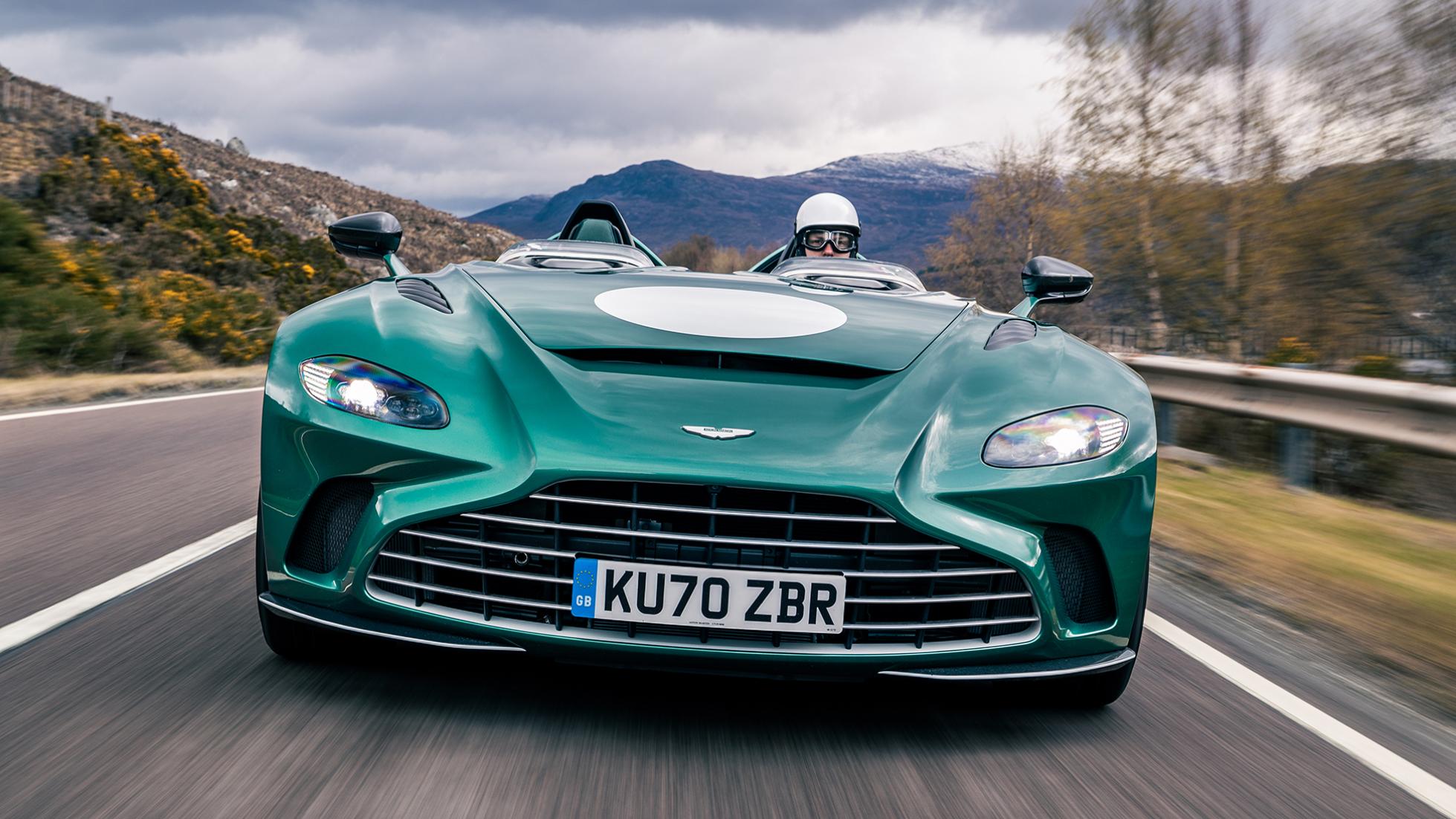 Here’s an Aston Martin we’ll never, ever see James Bond anywhere near. You can’t look suave in a Speedster. Drive one through town and everyone will judge you as an enormous poser. Take to the open roads and no-one will know who you are. Because you’ll be hidden behind a visor. Hear that? It’s the sound of The Stig emptying his Peppa Piggy bank.

Aston Martin has carved itself a fine reputation in building improbable specials, from the hyper-tracky Vulcan and stunning One-77 to the crazy Cygnet V8. The Speedster sits in the mix as a bit of an oddball, all at once very focused and hardcore and also strangely gentle and easy-going to drive.

It’s a crying shame that you don’t get much of the engine noise on board, but frankly this thing’s enough of an assault on the senses you’ll probably have quite enough to think about as you howl along. Chocks away. 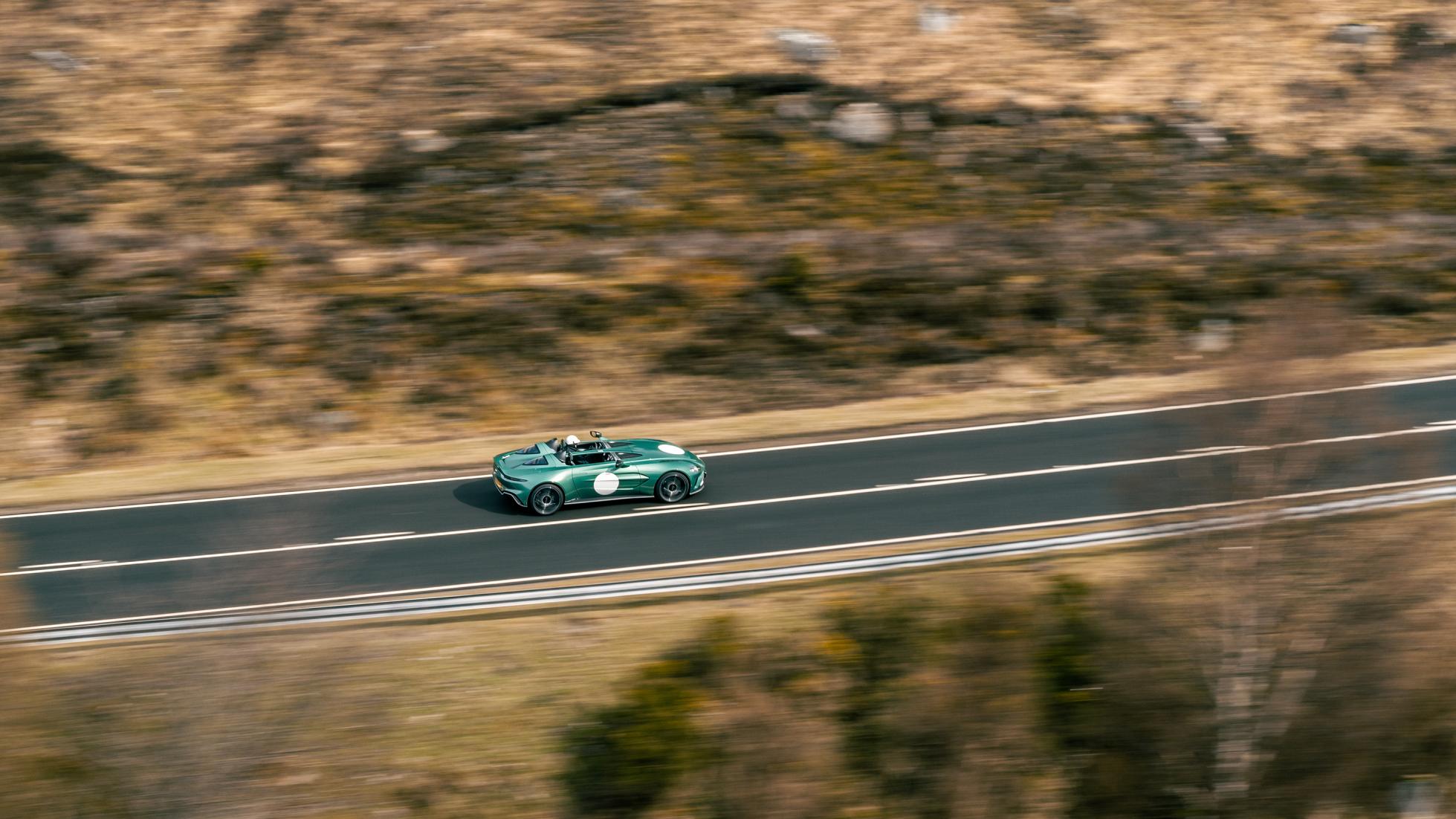 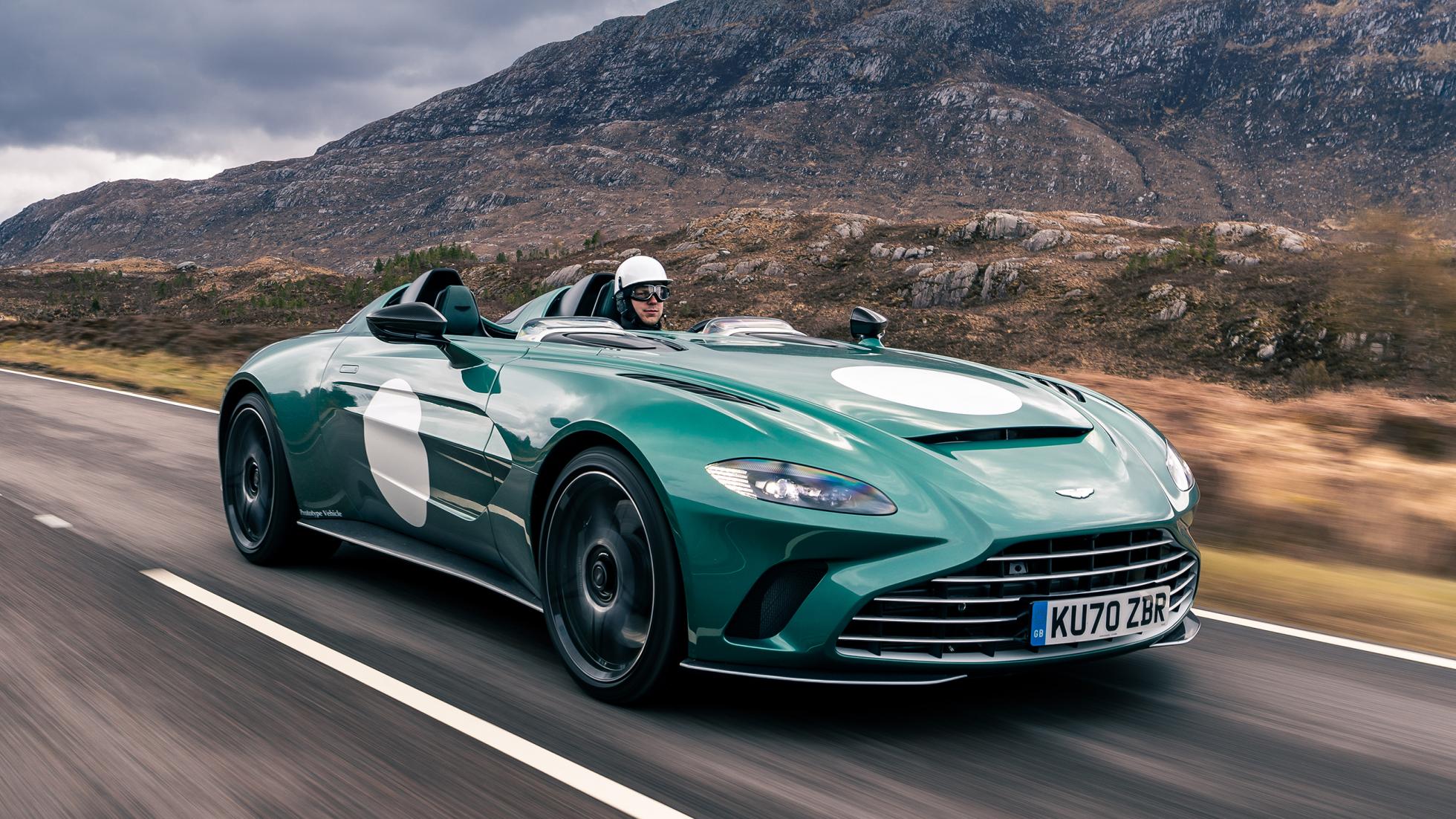 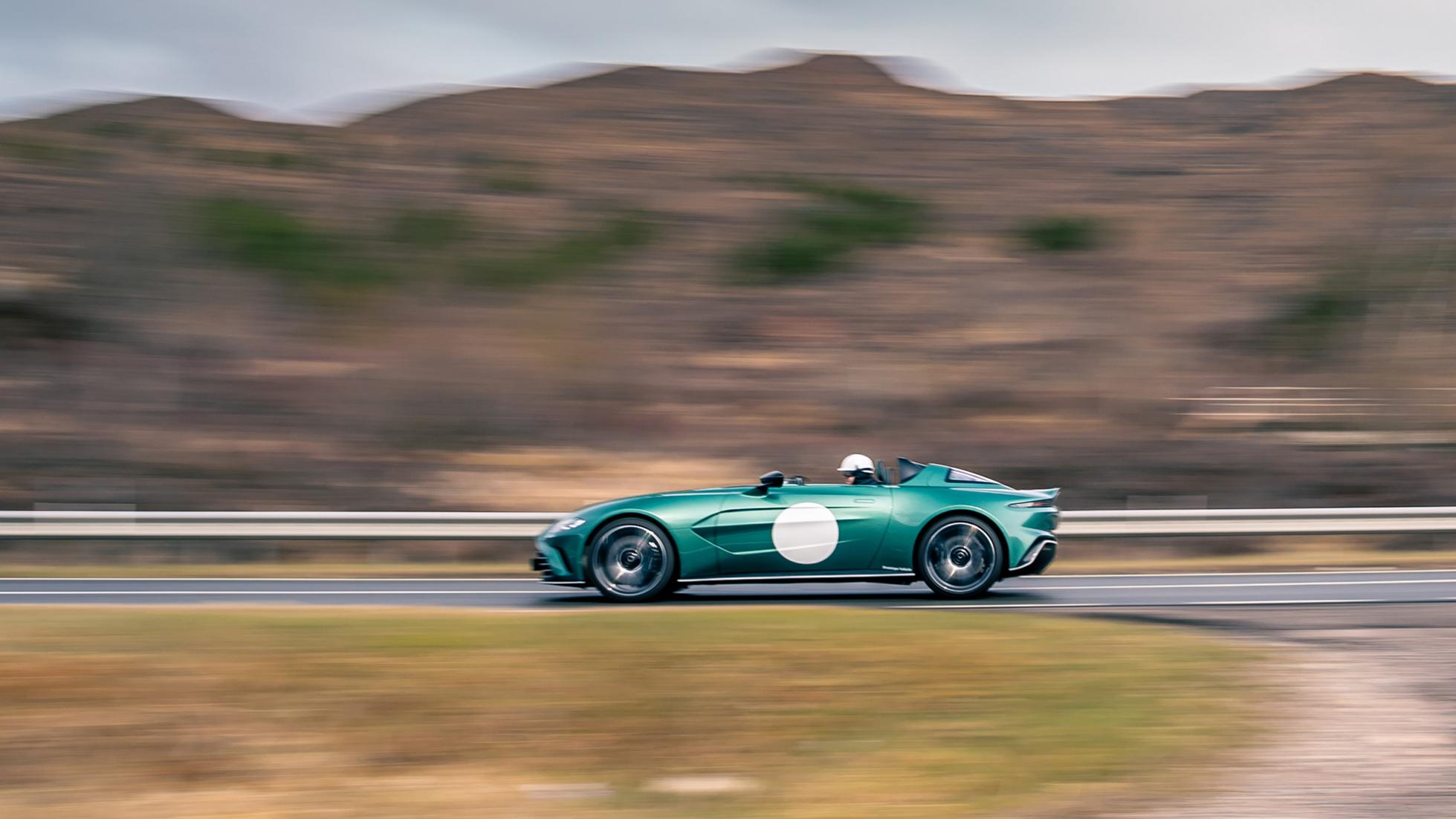 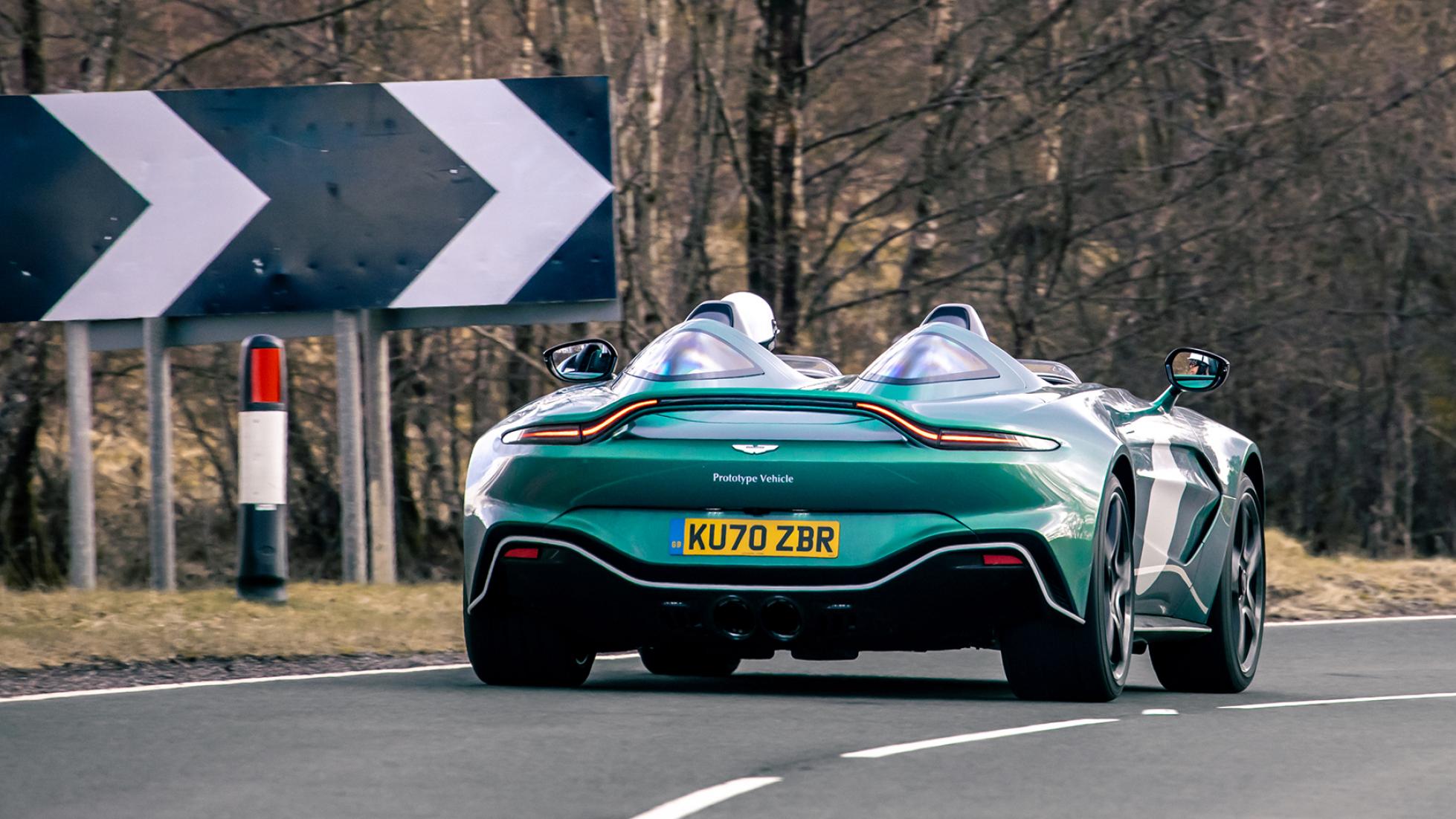 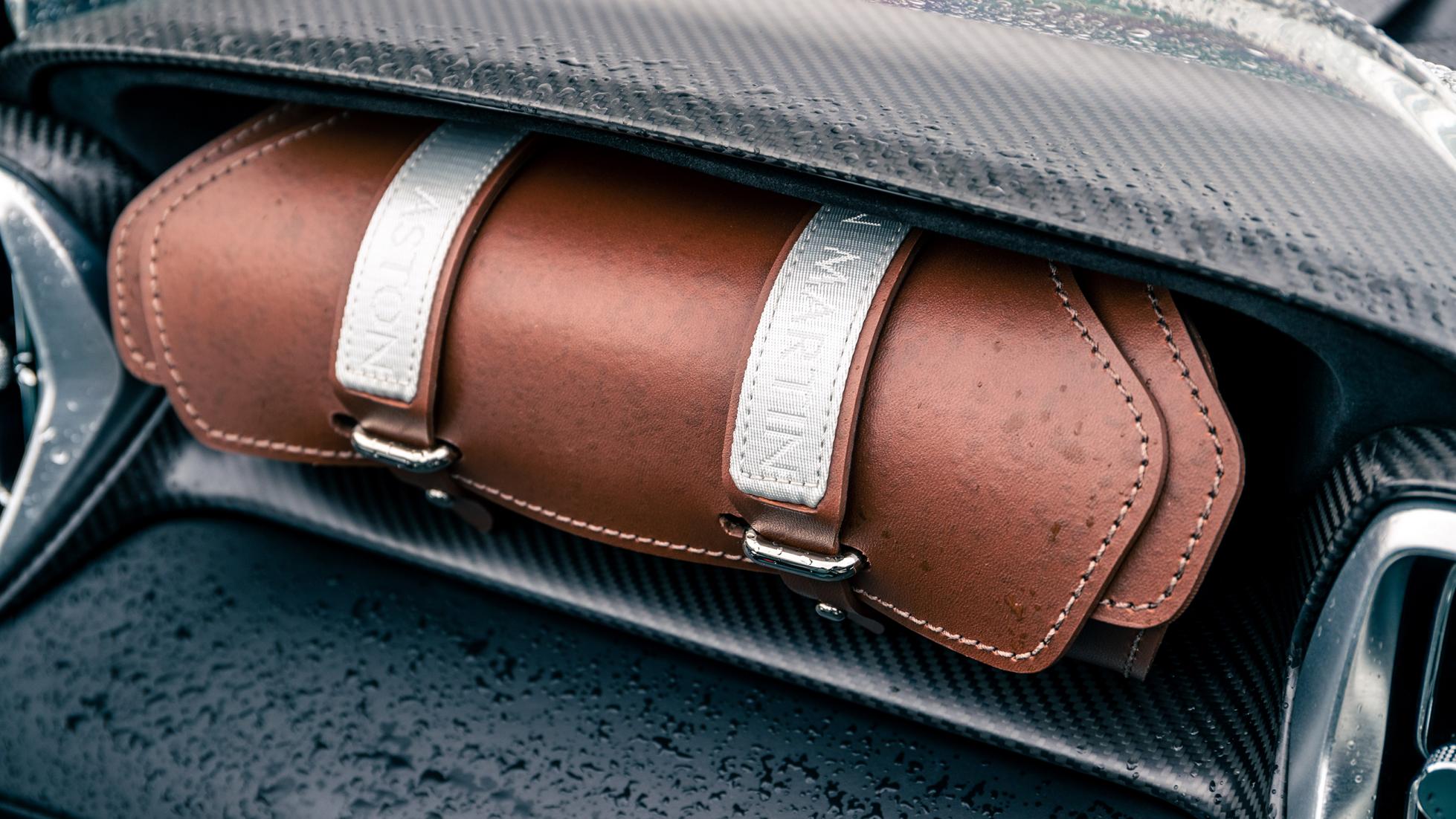