After a short-lived stint in the Philippines nearly a decade ago, Chinese carmaker Geely has returned to the island nation, making it one of the first markets outside China to receive the Geely Binyue. There, the compact SUV, which we're expecting to launch in Malaysia as the Proton X50, is called the Coolray. And Niky Tamayo of TopGear Philippines believes it can help brand custodian Sojitz, which also partners Mitsubishi Motors Philippines, propel Geely to the same heights as the Japanese carmaker.

Keep on scrolling for his full assessment of what could be the most hotly-anticipated crossover in Malaysia today... 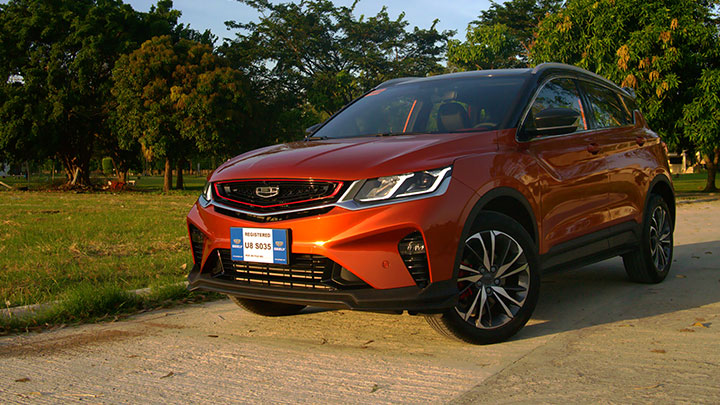 The Coolray’s design is based on the theme ‘Racing through Time.’ And those looks are suitably racy. The winged front end calls to mind a metallic manta ray, and is bracketed by brash grillework with hidden ‘G’ monogram motifs, and a plethora of LED lighting. Sharp creases give the body a solid, hewn feel. The intersection of the fender and the hard shoulder on the front door, in particular, shows off Geely’s high-pressure stamping capabilities well. A swoopy roofline terminates in an oh-so-trendy half D-pillar, ‘Wings of Time’ taillights cap the hard shoulder right underneath them.

The ‘Sport’ variant we have here features gorgeous 18-inch turbine-shaped alloy wheels, a black roof cap, and racy add-ons—front splitter, rear wing, and diffuser—with a faux carbon-fiber finish. No real aerodynamic effect—unglamorous plastic airdams underneath do all the work—but they are pretty.

The interior is best described as ‘Trekkie,’ with shiny grab handles and fancy exhaust-port AC vents framing a multi-mode LED intstrument panel and a wide 10-inch touchscreen. More ‘G’ monograms are hidden in the speaker grilles and the center console, while LED ‘waves’ under the silver panels light up at night, with colors to match whatever drive mode you’re in.

Well-bolstered black-and-red leather buckets provide comfortable perches, though the low seat cushion and the tight footwell mean you’ll have to scoot back a bit to find a comfortable driving position. Rear seat and trunk space are generous, thanks to a long 2,600mm wheelbase, but a gigantic full-length sunroof, with an integrated electric sunshade, cuts into headroom a bit. There’s a removable tonneau cover in the back, and the rear seats can be folded for extra space, though given the size of the trunk, there’s rarely ever a need to do so. The Geely’s engine starts up with a tiny bark, then settles into a smooth, whisper-quiet idle. From the inside, that is. Crank the window and you’ll be met by the muted but familiar clatter of a three-cylinder mill. But one with a big honking turbo. The Volvo-derived 1.5-litre engine makes 175 horsepower and 255Nm of torque, more than in the similar Volvo XC40 T3—at least until next year’s power upgrade. Instead of the eight-speed Volvo automatic, the Coolray features a seven-speed dual clutch, which will also likely find its way to the XC40 next year.

The combination is good for 100kph in around 8.6 secs, despite some delay in response from a full stop. Boost kicks in at just under 1,500 rpm and there’s power everywhere, though the transmission often shifts well below 6,000rpm. Thanks to a wet clutch system—as compared to the dry clutch on other small DCTs—the expected slurring, hesitation and jerkiness in stop-and-go traffic is notably absent. It’s only in the hard-shifting Sport mode where acceleration at low speeds can feel jerky. In Eco mode, operation is buttery smooth, but response feels just a bit too languid. Normal mode—accessed by simply exiting either Sport or Eco—is the Goldilocks zone, comfortable enough for daily driving, but responsive enough for quick overtakes.

Thanks to the efficient drivetrain, in-town economy hovers in the 8km per litre (12.5l/100km) range. On the highway, the sheer smoothness and refinement of the Coolray had us unconsciously cruising at well over the limit, which sort of ruined our fuel logs. Keep to 80kph, though, with the engine just ticking over idle in seventh gear, and 20+km per litre (5.0l/100km or less) is possible. Not bad for this much power!

By default, the Coolray’s steering assist is linked to the drive mode, but it’s disconcertingly light in anything but Sport mode. There’s a setting in the menu that allows you to lock it there, but even with the extra heft, on-center feel is a bit rubbery. Which is odd, because the action itself is quick and responsive. The Coolray is quite agile, with good roll control and lots of grip from the 215/55 R18 Continental Ultracontact UC6 tires. It may not have the communicative verve of the Mazda CX-3, but it’s one of the few cars in this class where such comparisons don’t feel forced. On the debit side, the soft rear suspension squats under acceleration and shimmies a bit when braking deep into corners, but stability control keeps things tidy. Again, that you can make these observations in the first place speaks highly of the car.

In more sedate driving, the Coolray acquits itself well. The stiff-sidewalled Continentals klumpf a bit over bumps, but not uncomfortably so. Good sightlines and large glass pay dividends in traffic, and a 360-degree camera display—with integrated proximity sensor overlays—makes parking a doodle. Aside from the standard top-down view on the camera system, there are several 3D views and wide-angle views that stay active at up to 30kph. They also activate when you signal to turn, to assist in merging. There’s a self-parking system (which we’ve covered in another video) that works a treat in well-marked and well-lit parking lots, but which can be indecisive in the dark. A speed limiter and adaptive cruise control round off an automated assist system that’s unrivaled by anything else in this class. Aside from the aforementioned driver aids, the Coolray Sport features automatic lighting and wipers, keyless entry, remote start, a gigantic two-panel sunroof with an electric shade, and twin USB ports flanking the 12V outlet hidden under the center console. Conspicuously absent is rear AC. Perhaps Geely thought it unnecessary on a car this small, but there’s only a narrow gap between the bulky front seats for air from the AC vents to pass through.

On the bright side, the touchscreen system rocks. There’s the aforementioned camera system, a built-in DVR ‘dashcam’ that records not only video and speed, but also driver inputs and signal usage. Sound from the six-speaker system may not be as crisp as the best, but it’s got good clarity and bass reproduction. Though the Coolray lacks Android Auto and Apple CarPlay, the bundled QDLink Android App is one of the best aftermarket mirroring systems I’ve tried so far. No faffing about with developer options or passwords. Just download, boot up, plug in, and you’re good to go. QDLink features a customisable dashboard for preferred apps, as well as straight screen mirroring. This allows you to run not just navigation apps like Waze, but also movies and mobile games. But not while driving, please! 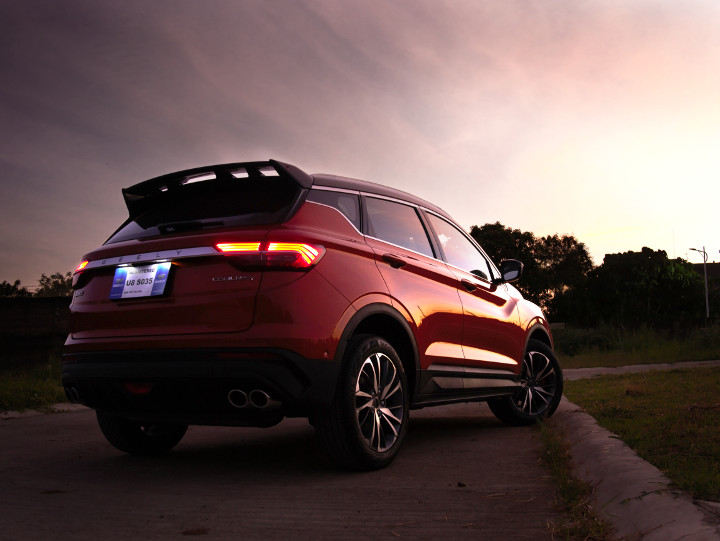 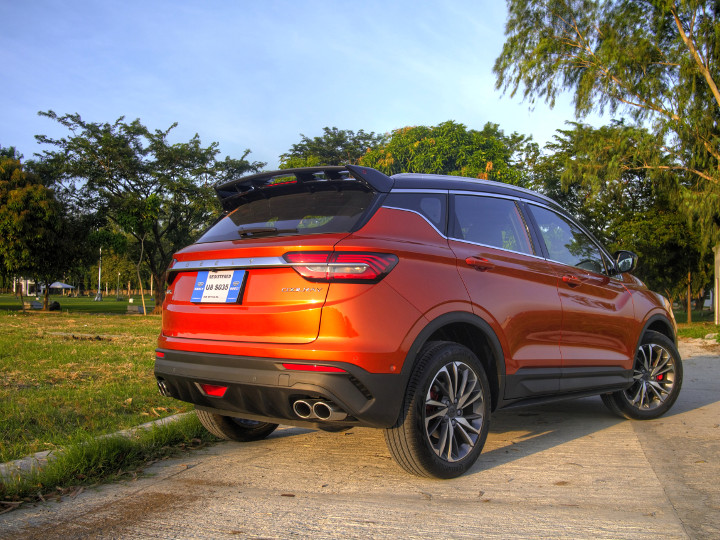 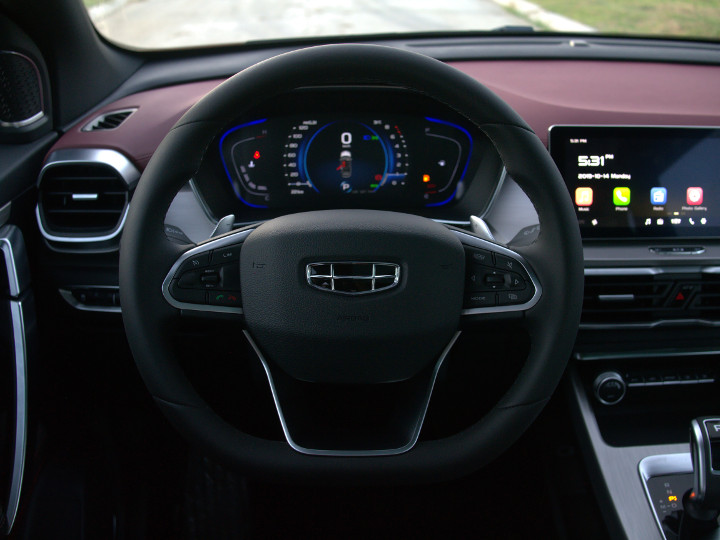 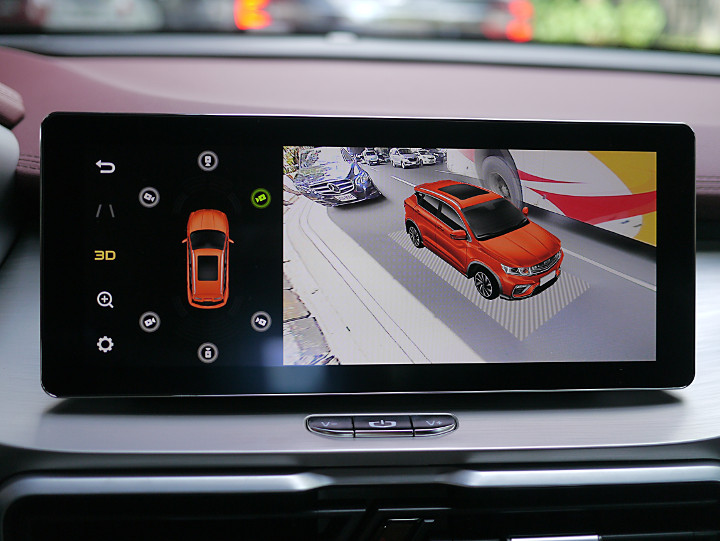 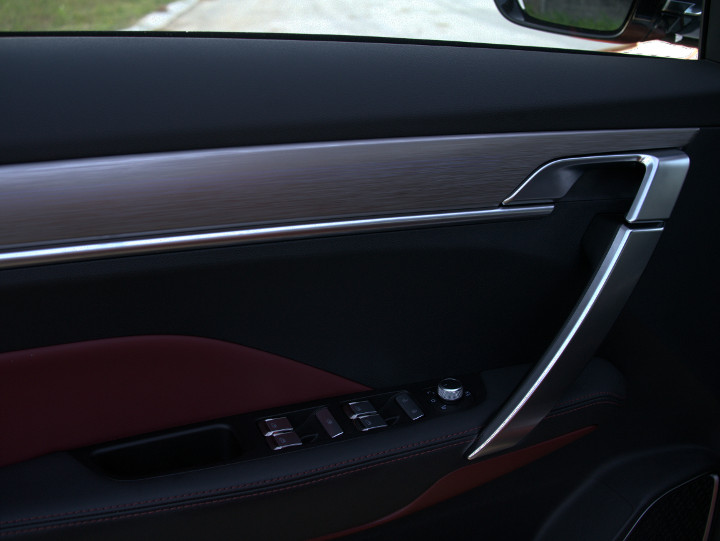 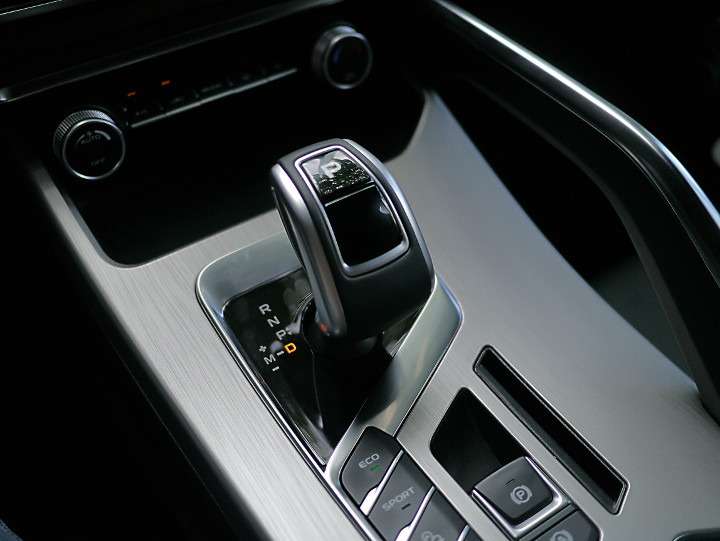 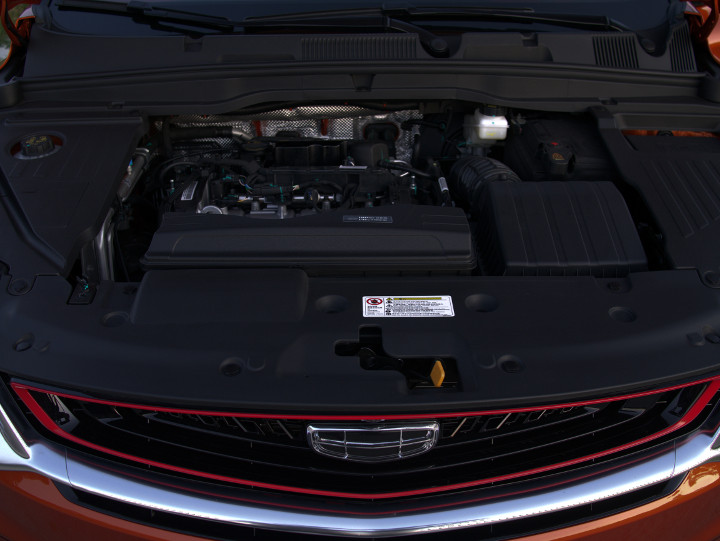 There are crossovers that provide the same level of power, kit, and refinement as the Coolray— only they tend to cost over twice as much. What you get here is premium content with a mass-market price tag. Even the base Comfort variant, at under P1 million (under RM80k), features the same 10-inch infotainment package and 174hp engine. And while it does have some drawbacks, that value for money—plus a 150,000km/five-year warranty backed by an experienced distribution group—makes it seem like a winner. It may be a little late to the game, with several other turbocharged Chinese crossovers already on the market, but there’s nothing else offering this much kit and luxury at this price level. Where the lovable Panda couldn’t charm its way into our crowded market, the ’Ray may just have the sting to knock the competition dead.

This story was originally published by TopGear Philippines. Review and photographs by Niky Tamayo.