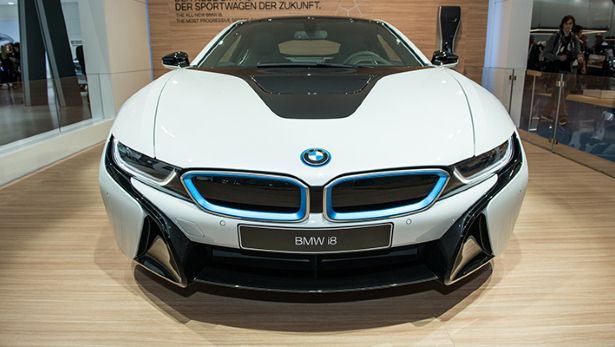 The Frankfurt show sees the unveil of the BMW i8. Like that other endlessly teased petrolelectric supercars, the Porsche 918, we've seen concepts, driven prototypes, and now get the real thing. And it's claimed to have on-road performance to match an M3 or base 911.

Far more than the 918, BMW has been marvellously free-thinking with the design. The i8 is a sports car with all-new drivetrain tech, and a new kind of carbon-and-aluminium shell, and advanced aero. So the design doesn't hide it under conventional sports-car tropes. It's proudly new.

BMW design chief Adrian van Hooydonk says the two-colour scheme emphasises the light weight and shows off the way the air flows. The body uses layered panels, which guide slices of air across the wheels, over the tail and through the radiators. He's chuffed they managed to do all that without needing a moving spoiler. "The brand is about efficiency, so we avoided that mechanism."

Among the most striking elements are the curled wings over the upper rear 3/4 part of the car. The cockpit beneath has a narrow teardrop shape, says van Hooydonk, to reduce drag. But a narrow car would look puny, he explains, so the wings add visual width without spoiling the aero. "It would be cheaper to leave them off, but without them you'd have an odd-looking vehicle."

The interior's also strikingly different from mainline BMWs. It runs glass-cockpit all-screen instruments and very thin, light seats to emphasise the featherweight engineering that's needed to keep the weight under 1500kg despite the battery.

The i8 actually began as a true concept car with no plan for production. Six years ago at this same show, BMW wanted to show it was thinking of a electric vehicle, but wanted to get away from the dullard image these things had (maybe still have). So it made the Vision EfficientDynamics, a pretty pure design exercise. "Although we did put it in the wind tunnel, which we'd never done for a concept before," says van Hooydonk.

The idea was to show off BMW's ideas on making bodies from carbonfibre, and its battery and motor tech, and to get the i brand known. It was all designed to build the hype for the i3. But then they gradually realised it was actually a viable idea to build the sports car too.

And so was born the i8. It uses the same carbon manufacturing process as the i3, and the same kind of battery and electronics, and the i3's motor. About six months after the i3 was given the sign-off for production, BMW decided to develop and launch the i8 too.

Of course the i8 isn't quite like the i3. Phew. There's no all-electric version. All i8s have a petrol engine, a highly boosted 1.5-litre three-cylinder of 230bhp. The electric motor is at the front, chipping in another 130bhp. So you get BMW that's basically FWD in electric mode, and 4WD in full-beans mode. We loved driving the prototype.