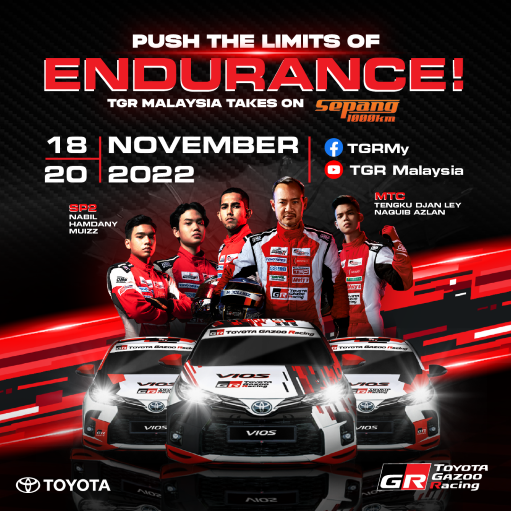 After a successful debut in the 2021 edition of the Sepang 1000KM, Toyota is now gunning for its  Vios model to win Malaysia’s most prestigious endurance race.

This year’s Sepang 1000KM which will again be contested over nine grueling hours will be held  from 17-20 November 2022 at the 5.534km Sepang International Circuit.

UMW Toyota Motor and GAZOO Racing Malaysia will be officially represented in the MTC and SP2 Classes of the Sepang 1000KM. Two racers will spearhead the MTC Class to fight for the overall  victory – an achievement it so nearly came close to achieving in 2021. The Sepang 1000KM will  also see a total of 15 SP2 Class Toyotas competing in the GAZOO Racing Vios Enduro Cup that is  exclusive to and open to all generations of the model competing in the Vios Challenge and Vios  Sprint Cup race series.

“Endurance racing is the very pinnacle of motor-racing and the Vios, as well as models like the  Yaris, have successfully demonstrated in the 2021 edition of the Sepang 1000KM that it has both  the reliability and outright performance to become winners,” said UMW Toyota Motor President  Ravindran K.

“The running of the GAZOO Racing Vios Enduro Cup further illustrate the capabilities of the  standard-production Vios in this ultimate test, keeping in mind that the same cars have already  endured six races in the Vios Challenge and another four one-hour races in the Vios Sprint Cup this  year.”

Toyota had finished third and fourth in the premier MTC Class of the race in 2021. The pair of  Hayden Haikal and Timothy Yeo had crossed the finish line in 1st place overall and three laps ahead  of their nearest rival in the Yaris but were later dealt a penalty reclassifying them to 4th place  overall and 3rd in the MTC Class. The second Toyota pair of Boy Wong and Dannies Ng in the Vios  meanwhile, concluded a strong result in 4th place in the MTC Class and 6th overall. Three Toyotas  had also occupied the top five front positions from a field of 39 entries on the starting grid for the  race.

Ravindran added that the GAZOO Racing Vios Enduro Cup will serve as a fitting finale for what has  been an extremely successful and memorable season of racing for Toyota. It recently concluded  Season 5 of the Vios Challenge premier one-make race series and the running of the inaugural  GAZOO Racing Vios Sprint Cup which has been incorporated into the national Malaysia  Championship Series (MCS).

“Expanding beyond the Vios Challenge is in tandem with UMW Toyota Motor’s aspiration of  establishing a bigger footprint and to make an impactful contribution to Malaysian motorsports.  It ties in with our objective to continually build ever better products.”

While the Vios Challenge and Vios Sprint Cup are known for its intensely close and competitive  short races, the GAZOO Racing Vios Enduro Cup will put teams, drivers and cars to the ultimate  test over a distance of 1,000km.

The GAZOO Racing Vios Enduro Cup will be putting up a total of RM30,000 in prize monies with  the overall champion taking home RM10,000! The first runner-up will win RM8,000 while the third,  fourth and fifth place winners will take home RM6,000, RM4,000 and RM2,000 respectively.
Limited slots are available in the GAZOO Racing Vios Enduro Cup, and to register participation or  for more details, racers and teams can contact UMW Toyota Motor’s Race Management  representative Janet at 016-367 3300.