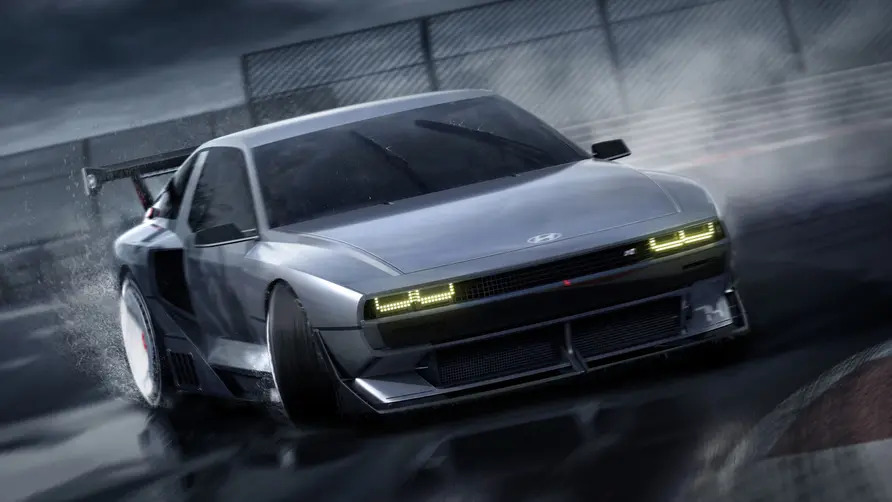 Nestled amongst the multitude of excellence that emerged from fabled Italian designer Giorgetto Giugiaro sit both the DeLorean and the Hyundai Pony Coupe; the latter influencing the former, at least according to Hyundai.

So you could say the company’s gone back for its future, because the Pony has now influenced this. Hyundai calls it the N Vision 74 concept, a car that revives that ill-fated Coupe and propels it so quickly into the future you’ll be shrieking ‘1.21 gigawatts’ in no time.

Well, not quite 1.21. There’s a 670bhp hybrid drivetrain on board that allows for a 155kph top speed, hybrid here referencing the 74's battery and hydrogen fuel cell setup. The battery is a 62.4kWh unit with 800V fast-charging capability, while the hydrogen fuel-cell is said to be “the most advanced” the company has ever built, weighing just 4.2kg and able to be refilled in five minutes.

Power is sent to the rear wheels alone via a pair of motors with torque vectoring, “allowing a precise and responsive cornering experience”. (Indeed, one of N’s key pillars for each car is to be – in its words – a ‘corner rascal’.) Judging by the oversteer angle in the shots above, job done, we’d proffer.
The deployment of both power sources is said to improve cooling efficiency, and both can be used independently or altogether for the full ‘Great Scott’ effect – 670bhp is allied to a whopping 664Nm torque. There’s no 0-100kph time – nor a weight figure – but one suspects it’ll shift.

And when it’s not, you can admire the distinctive flanks that nod to Giugiaro’s original handywork. Sure, it’s got a big wing and diffusers large enough to double up as hoverboards, but the basic silhouette is delightful. Wide, flared arches frame those retro-infused wheels, while full nostalgia points are awarded to the slatted rear window.

Though we haven’t seen the inside, we’re promised that this 'Rolling Lab Concept' reinterprets the architecture of the original Pony Coupe concept and features a driver-centric layout that blends old and new, via a digital cluster and analogue buttons.

“N Vision 74’s future-oriented design reflects the respect and appreciation we have for the dedication and passion that went into the Pony Coupe concept,” said Hyundai Design VP SangYup Lee.

Perhaps you kids out there aren’t ready for it yet, but your parents are gonna love it.