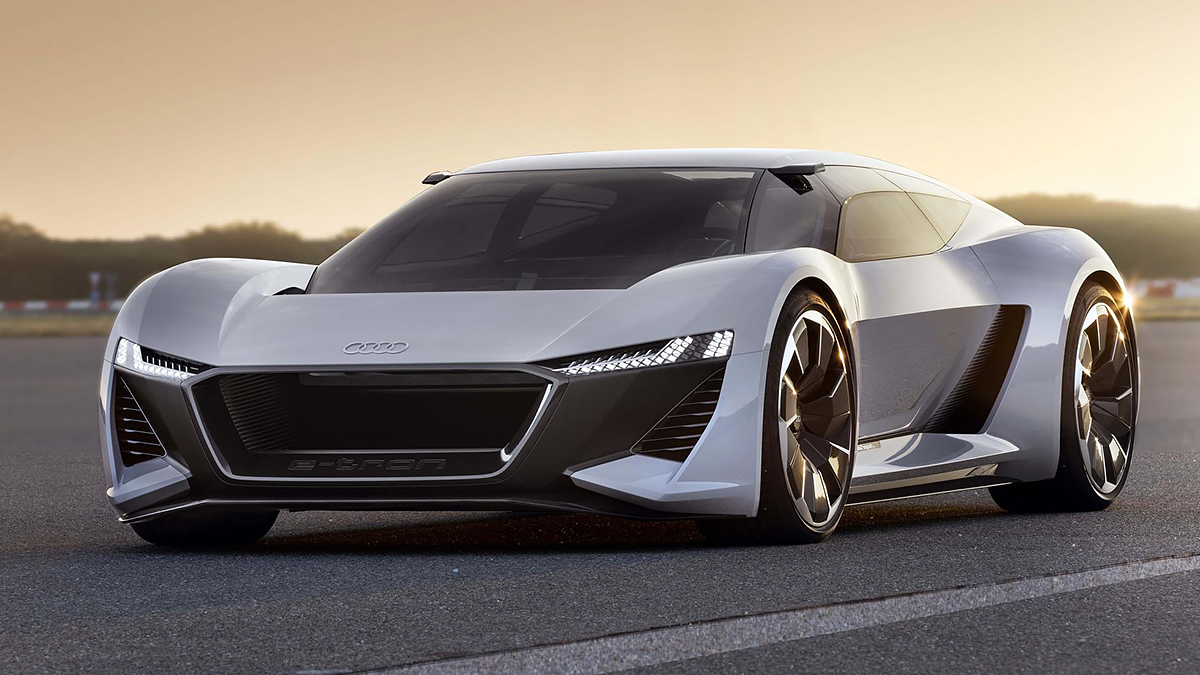 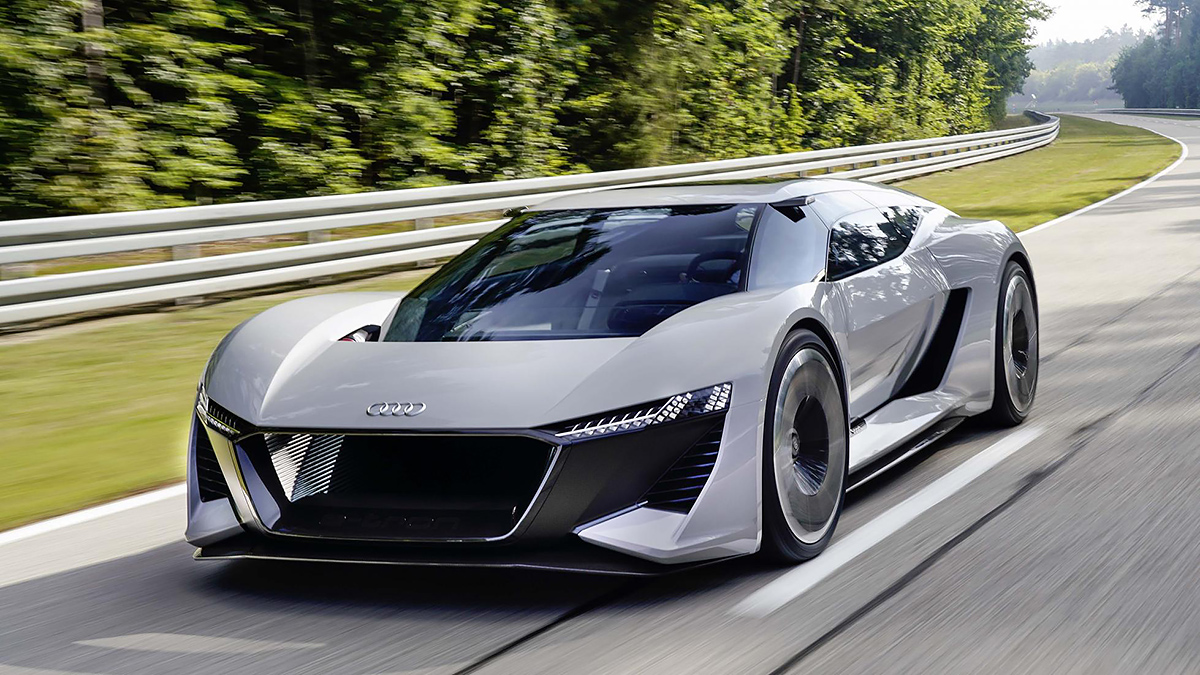 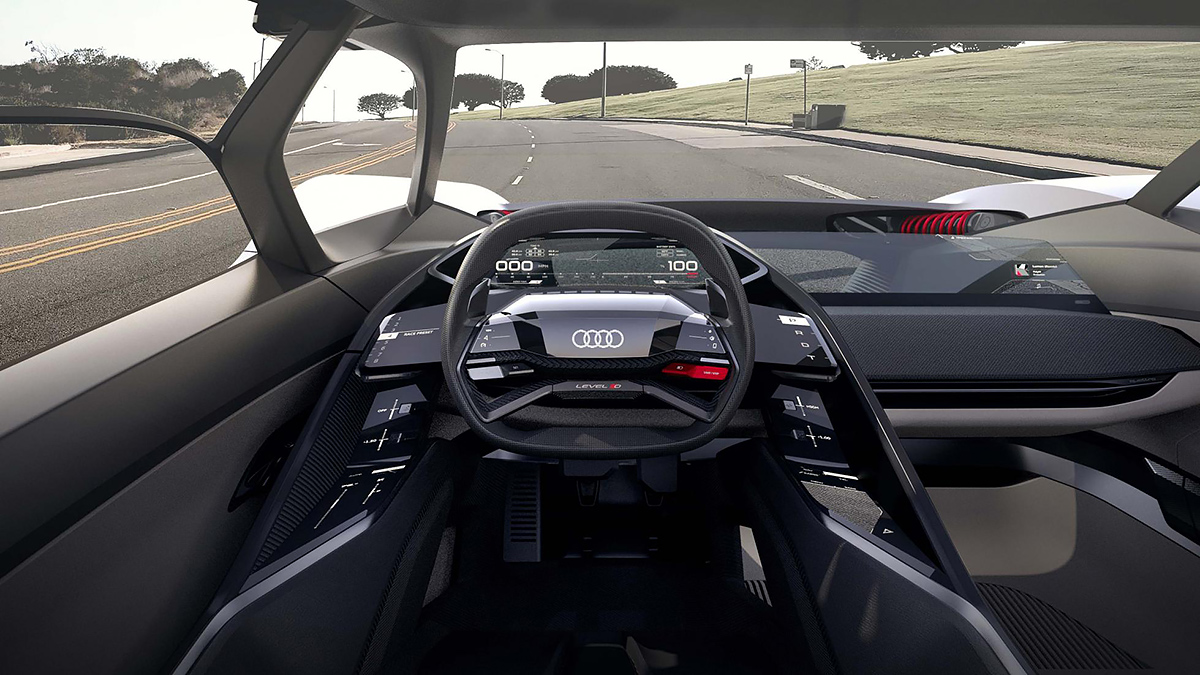 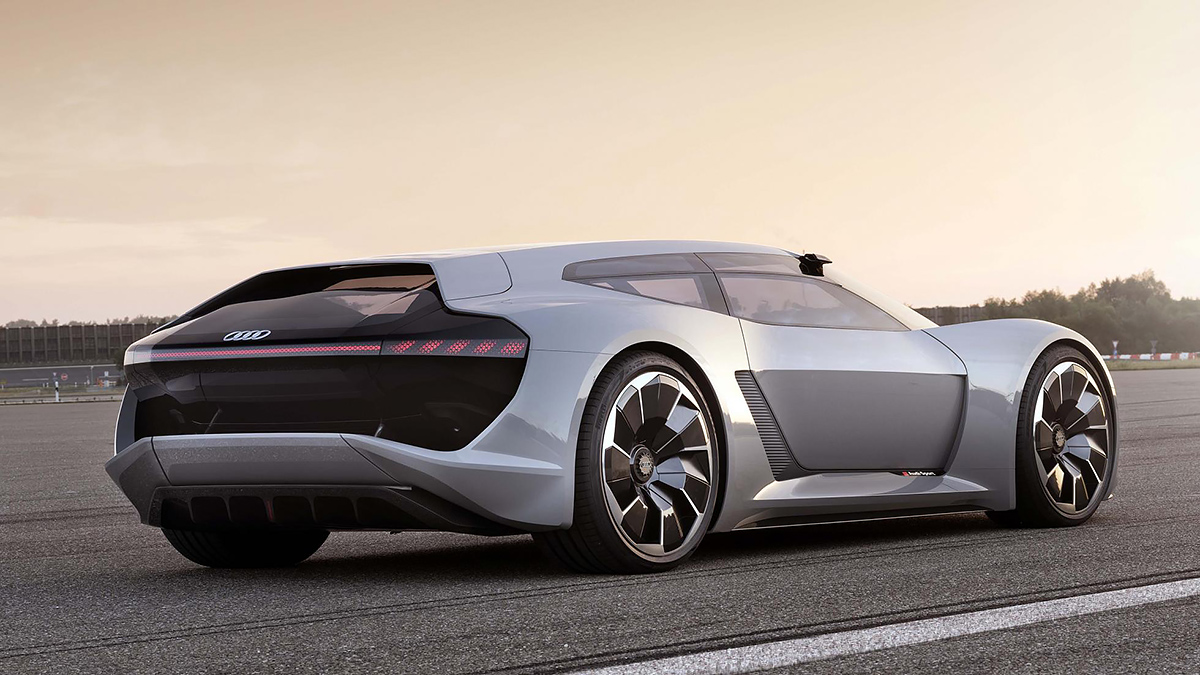 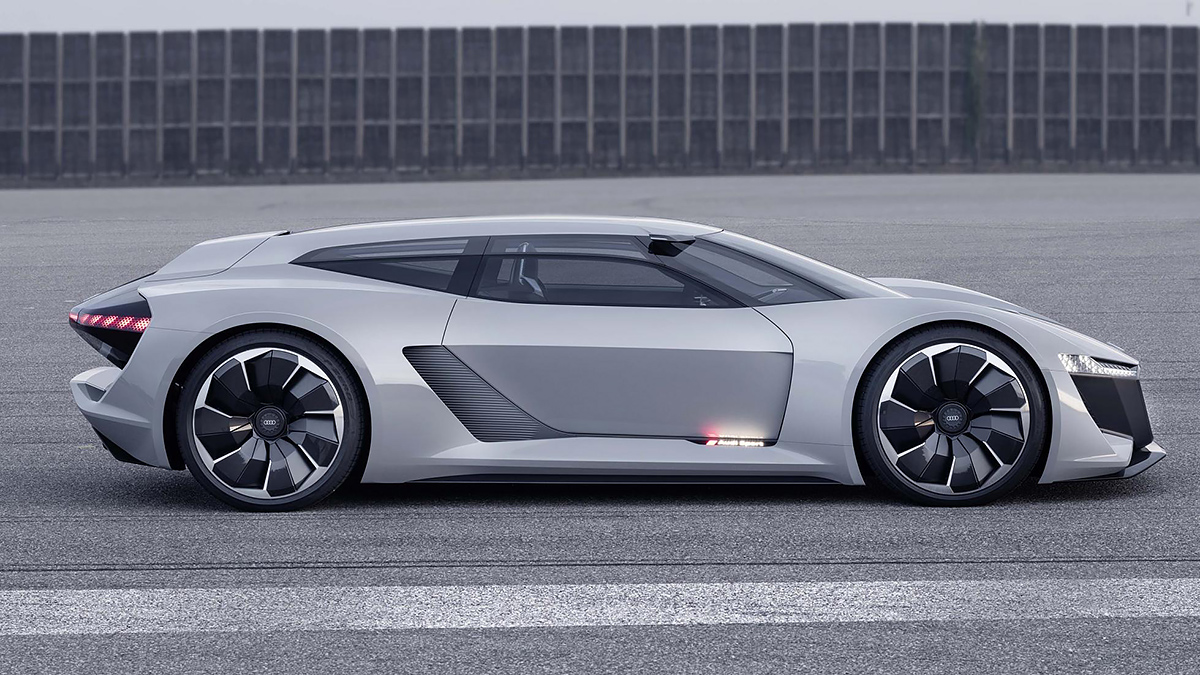 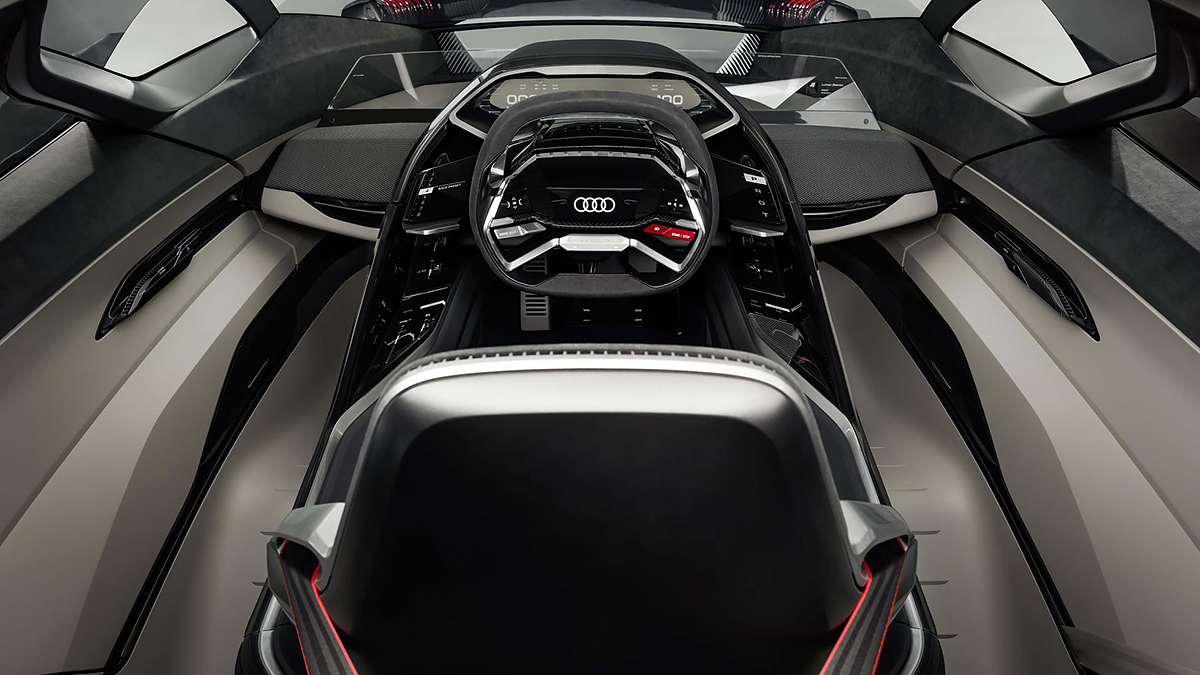 If at first you don’t succeed, stop thinking logically and design something so white-hot radical it burns a hole straight through the middle of the drawing board and lands smouldering on the floor. We can assume that’s the brief at Audi’s ‘Design Loft’ in Malibu, California, which has dreamt up this concept for a shooting brake electric hypercar inspired by Audi’s dominant decade in Le Mans racing. This 23rd century rollerskate is the Audi PB18 e-tron.

Ignore the underwhelming name, merely initials referring the car’s unveiling at the Pebble Beach festival of brightly dyed corduroy and champagne pricier than liquid platinum. Concentrate instead on details like a low, mid-mounted 95kWh solid-state battery, capable of accepting a full, 581-kilometre charge in only 15 minutes, thanks to 800-volt charging capacity. Or, if you’re less stung by range anxiety, a claimed 0-100kph sprint of two seconds flat. That comes courtesy of three electric motors: one shared between the front wheels, and one each for the rears, developing a combined 661bhp, but capable of short ‘overboost’ spurts up to 753bhp. So far so ‘generic electric supercar concept’.

But what makes the PB18 different is its love for you. Yes, you. The driver. Audi wants you there to enjoy yourself

But what makes the PB18 different is its love for you. Yes, you. The driver. Audi wants you there to enjoy yourself. Which is why this is the first battery powered hyper-pod we can remember which doesn’t twin its bowel-bothering acceleration with utopian visions of a self-driving, computer-controlled future. There’s none of that ‘you enjoy the twisties, then let the chips take over for the commute’ rhetoric here. In fact, Audi says the skunkworks codename for the PB18 was ‘Level Zero’, to ram home the fact it couldn’t be further in philosophy from the Level 4/Level 5 grades of self-driving autonomy it’s currently scrambling to offer in flagship models. Should’ve stuck with ‘Level Zero’, Loft-scribblers. It’s better than ‘PB18’ at any rate. Unless you fetishize accurate private numberplates. 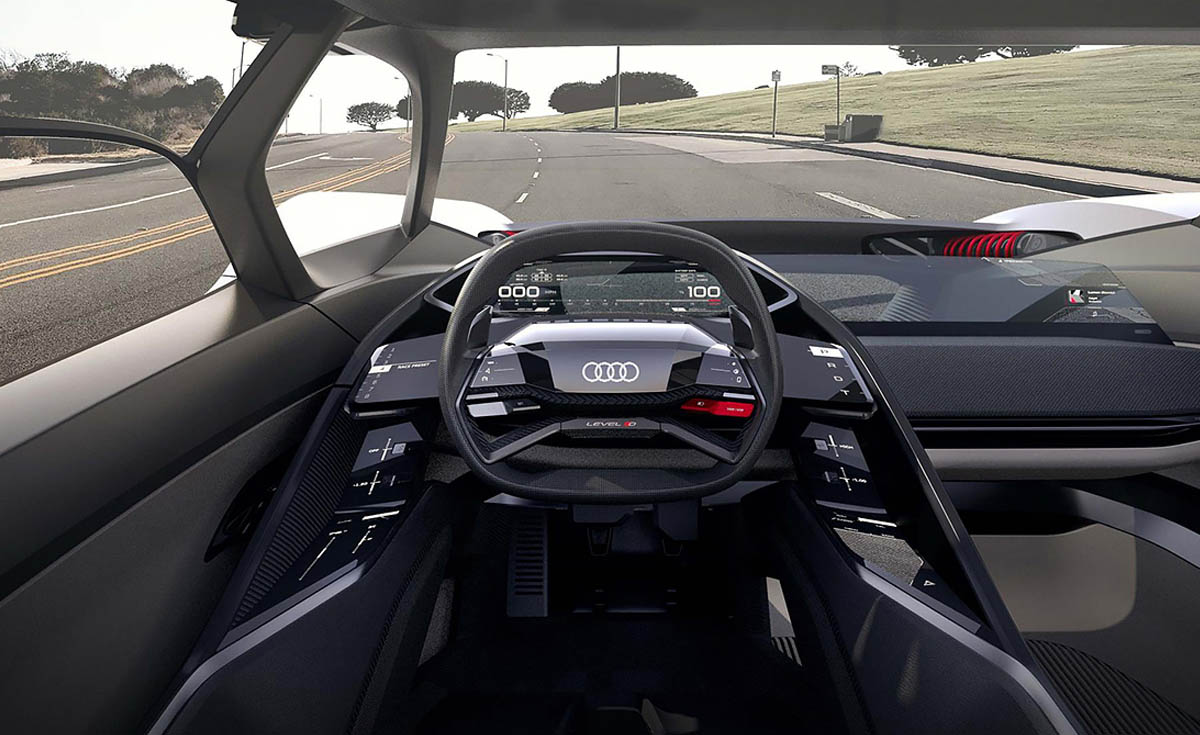 So, there are no self-driving systems on-board. But you can alter how you experience the ultimate in Vorsprung durch Elektrisch – as long as you’re happy to trust a machine with no mechanical connection whatsoever between its brake pedal and the carbon brakes, nor its steering wheel and those 22-inch front tyres. Thanks to the wonders of drive-by-wire, Audi’s designed the entire cockpit of the PB18 to slide from stage left to dead centre. Bucket seat, pedals, steering wheel and OLED head-up display – which overlays the ideal racing line on circuit into your field of view, or sat-nav directions on the way home into your eyeline – all shuffles as one. Get the full single-seater racecar experience, or ride side-saddle with space for a passenger via a flip-down jump seat. Get the spanners out and it might even fit right-hand drive…

Audi might have hit on something with the ultra-flexible cabin idea – despite being Aventador-sized, this is a very practical supercar. The pert shooting brake tail - which is home to an extending rear wing and dropping diffuser which morphs closer to the road for more downforce – allows for a 470-litre boot, not far off what you find in the back of an A4 wagon.

Of course, there’s also a Brian Cox brain’s-worth of physics going on here. Like magnetic conductive charging, corner-aceing torque-vectoring, laser headlights and so many lightweight periodic elements in the construction the whole car only weighs 1,550kg – Lotus-like for a full EV. But under it all, it’s supposed to be a selfish, purist driver thriller. It deserves to become science-fact this time please, Audi. Third time lucky?