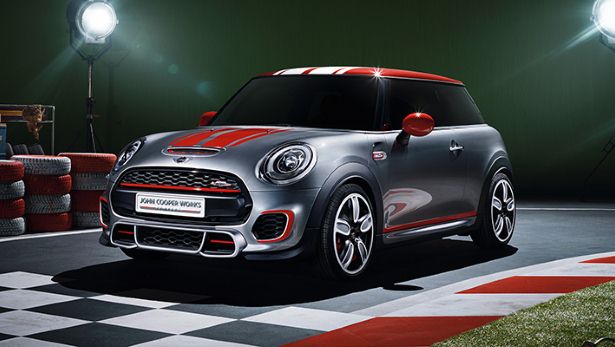 Mini shows off the hottest version of its MkIII hatch. But it’s just a concept... for now...

Good news! The new Mini John Cooper Works will be unveiled at the Detroit Show in January! Bad news! It’ll only be a concept. But not for long, we’d assume – we’ve already seen the Cooper and Cooper S variants of the MkII ‘New Mini’, so the production version of this yet-hotter JCW won’t be far behind.

So what do we know about the new JCW? Not, at the moment, a whole lot. As you can see, it gets a yet-bigger chin than even the Cooper S, with an extra set of air intakes lurking where the foglights sit on the standard car, along with smart 18-inch five-spoke alloys and much stickerage.

Mini says the sports exhaust gets a JCW silencer system (which, if past form is anything to go by, will be anything but silent), and promises an ‘unmistakable engine soundtrack’.

There’s no official word on the JCW’s power output, but with the new Cooper S making 189bhp from its 2.0-litre four-cylinder petrol, we’d expect it to get a bumped-up version of the same engine developing something in the region of 210bhp.

That should be good for a 0-62mph time around 6.5 seconds, and a top speed close to 150mph. The MkII Mini, remember, is virtually all-new, and Mini says the longer wheelbase and wider track will improve the JCW’s handling. Not that there was much wrong with the way it changed direction before, though we’d welcome a bit more travel in that multilink suspension.

We’ll find out more about the JCW concept at the Detroit show in January. So, assuming it reaches production (which it will), here’s the big question: this, or our newly crowned Car Of The Year, the Ford Fiesta ST?