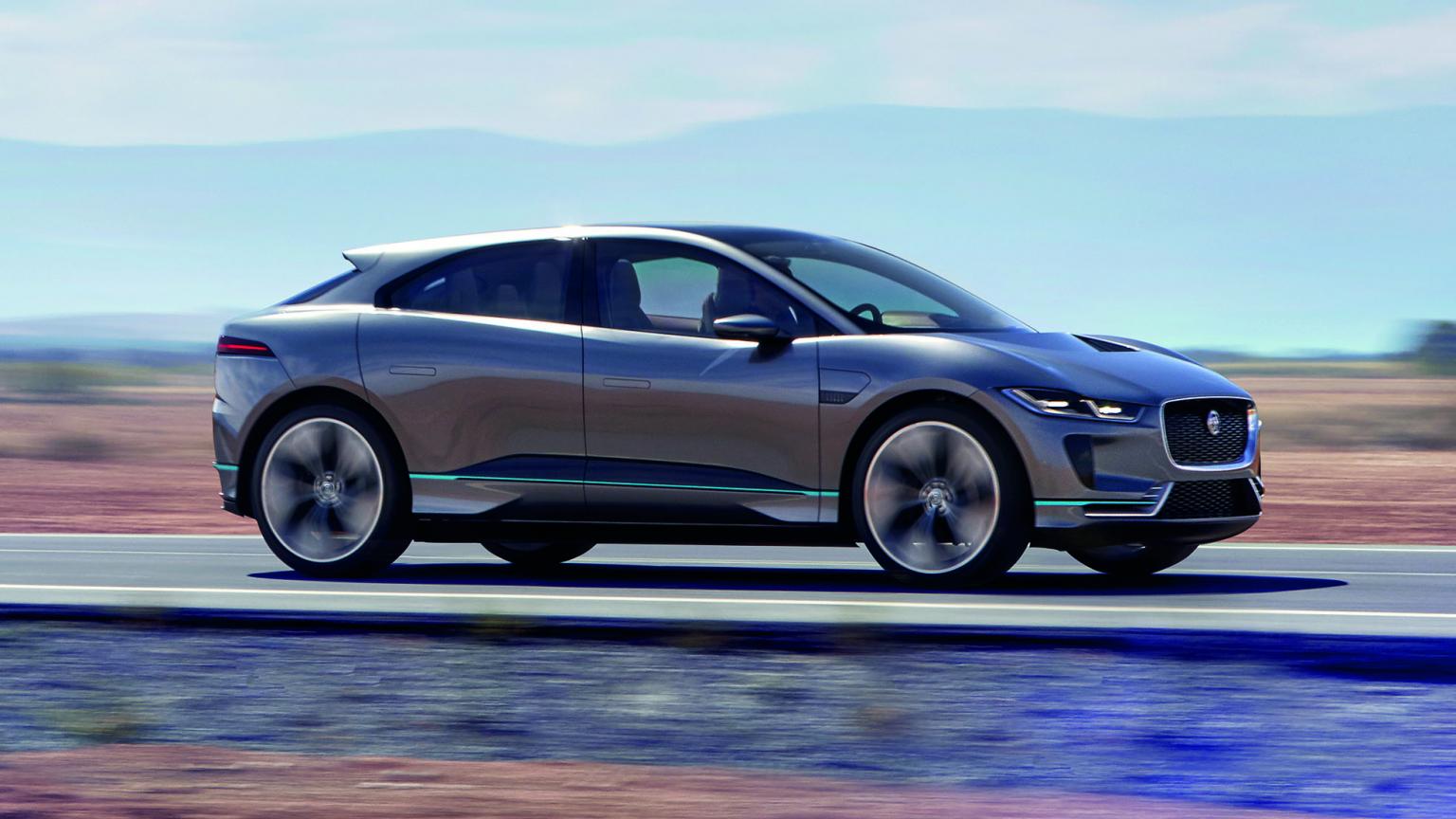 Jaguar is going Tesla-hunting. This hunk of futurism is the new Jaguar I-Pace concept: a 394bhp, 4WD, pure electric SUV that’s the size of a Porsche Macan but has Cayenne levels of space inside. And it’s not a far-away vision of the future: you’ll be able to buy something virtually identical to it in mid-2018.

“It’s a concept car, but honestly it’s pretty close,” explains Jaguar design director Ian Callum. “There’s a few little details here and there that you won’t see in production, but most people won’t notice much of a difference. It’s really quite different from anything we’ve done before, or indeed anyone’s done before, really.”

He’s not wrong. If you’re having a hard time getting your head around the car’s proportions right now, that’s because they’re the polar opposite to its running mate, the F-Pace. By starting with what Callum calls a “skateboard” platform – a flat battery between the axles with an electric motor at either end, all developed in-house – he and his team had total freedom to place things wherever they wanted. 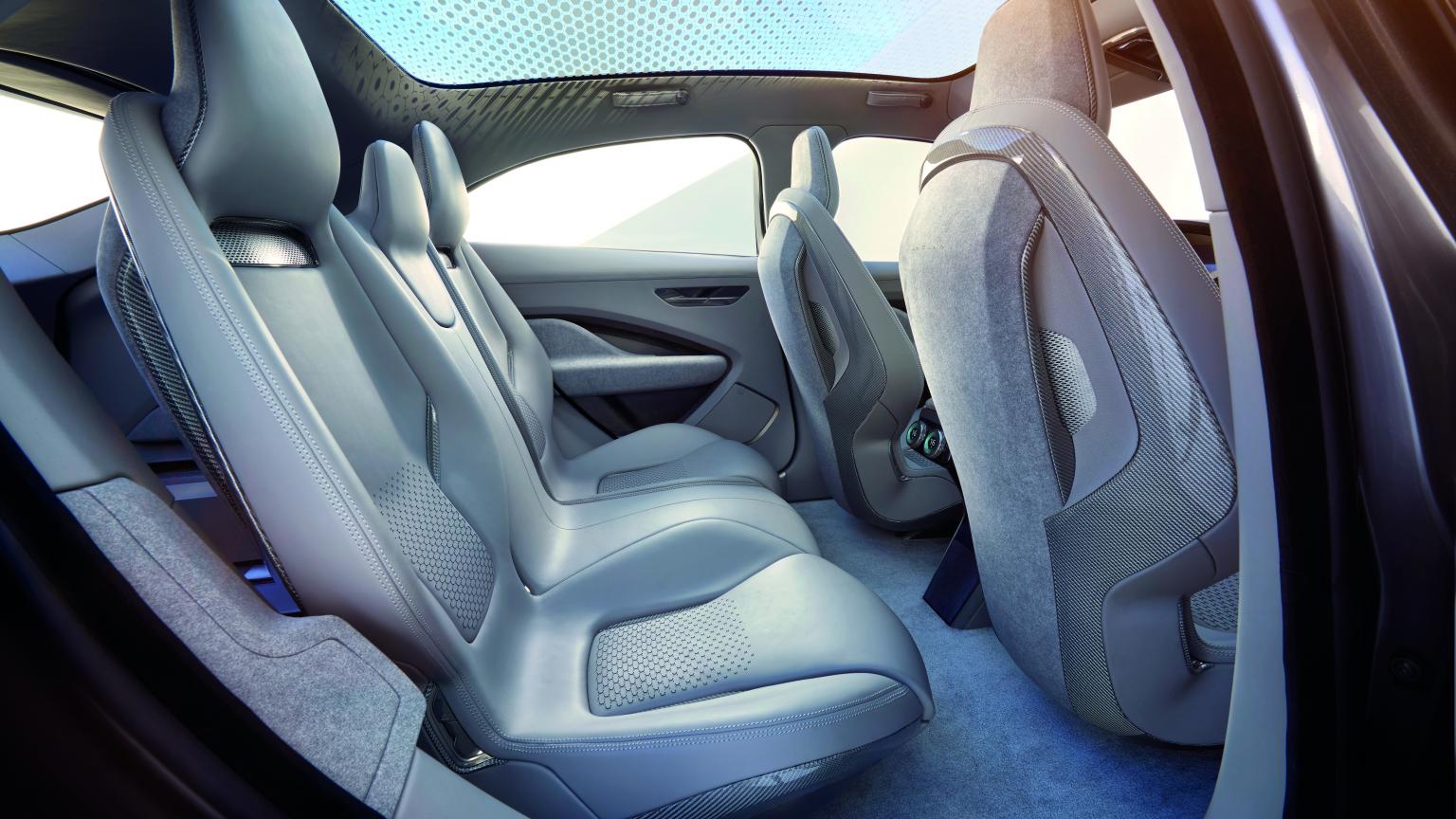 “There’s no point in a long bonnet because it doesn’t have a great six-cylinder engine like the E-Type. I found it fascinating that we could take an SUV and give it the characteristic of a mid-engine sports car in its profile because you’re bringing the cab forward and nestling it between the wheels,” explains Callum.

And it’s not just mechanical layout that encouraged him to throw the visual mass forwards. Getting the drag coefficient down to a remarkably slippery 0.29 (the F-Pace is 0.34) was a constant consideration. The scooped bonnet raises the front end and smooths air over the roof, and that most un-Jag-like rump. “Perhaps the high and square tail is in conflict with the boat tails from Jaguar’s history, but square back ends are aerodynamically efficient, so we bought into them and made it work, hopefully in an elegant way,” says Callum.

This is a bespoke aluminium architecture, not a carry-over or a battery slotted into an existing platform. It places the batteries between the wheels and as close to the road as possible, dropping the centre of gravity by 120mm compared with the F-Pace. And it’s the battery size that dictates the car’s basic shape, because a long wheelbase means you can cram in more lithium-ion pouch cells and go further on a charge. 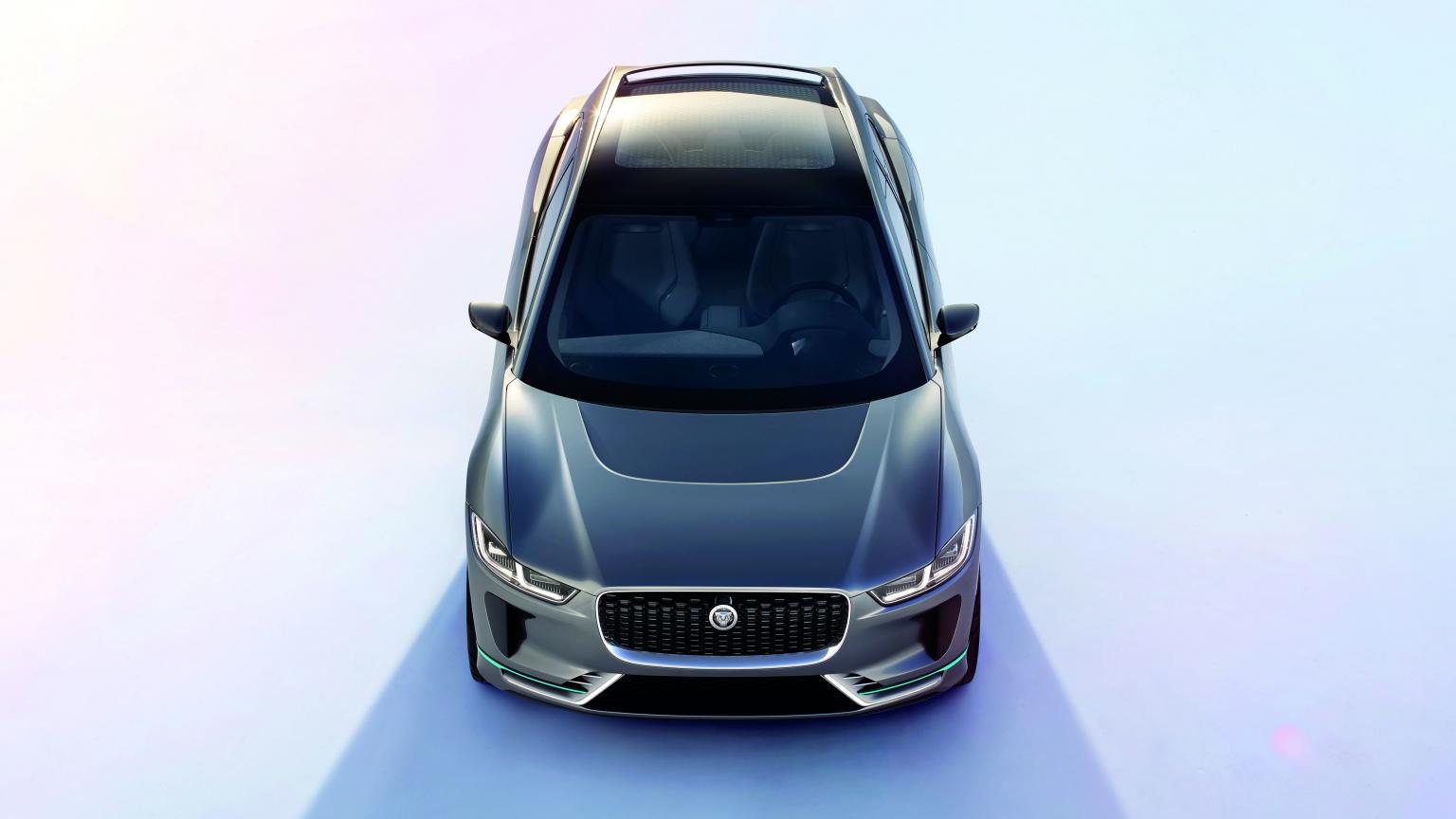 The upshot is a wheelbase that’s 115mm longer than an F-Pace’s, but overall it’s 40mm narrower and 50mm shorter. Not that you’d notice inside, because by exploiting that cab-forward design, there’s actually more rear legroom and a marginally smaller, but still vast, 530-litre boot.

A motor at each end means near perfect weight distribution. The permanent magnet motors in question are a concentric design – where the driveshaft runs through the middle – helping them to be packaged into an incredibly tight space. As for torque, the car’s brain can distribute it to the front or rear as it sees fit, while an open differential on each axle sends more of it to the side where the most grip is. It can even control the level of regen deceleration on each wheel to help balance the car.

Springs and dampers are lifted from the F-Pace (because why the hell wouldn’t you?), and the production wheels will be exactly the height you see here, albeit with a fraction more sidewall than these show-pony 23s, and slightly narrower to better slice through the air. 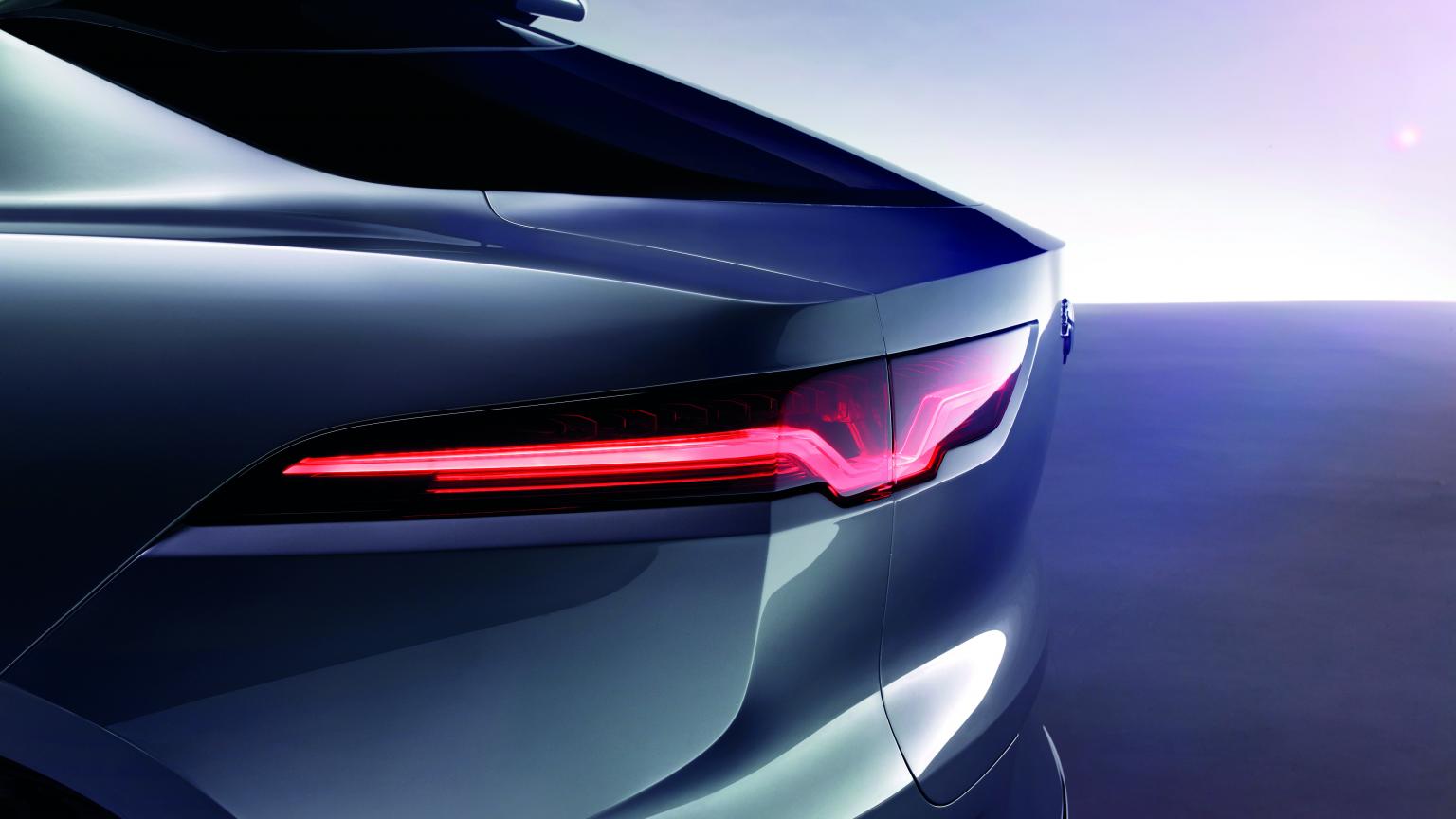 Combined power from both motors is 394bhp with a hefty 700Nm of torque: more twist than a Tesla Model X P90D, but, oddly, almost 300bhp less. There’s nothing odd about the performance, though: Jag’s claimed 0–100kph time of 4.0 seconds is 0.3secs behind a P90D, but enough to out-drag pretty much any other SUV on sale, Porsche Cayenne Turbo S and Bentley Bentayga W12 included.

More pertinent is that the 90kWh battery can be charged to 80 per cent in 90 minutes from a rapid 50kW D/C charger, although the I-Pace will be future-proofed with the ability to accept charge up to 150kW (Tesla’s superchargers currently deliver 120kW) as and when they start to appear. And the range? Up to 500km, or 310 miles on the NEDC cycle. Plenty to get you to the golf club, sorry… social media consultancy conference on the Facebook campus, and back.

In Callum’s words, the interior is “very much the template for our future touchscreen technology.” Perhaps that should be touchscreens technology, because there are many. The 12in instrument panel is, naturally, digital, while a central 12in touchscreen sits above a lower “minor” TFT screen with rotary dials (also with screens on them) either side. “I’m a big fan of the tactility of these rotary controls as opposed to a huge iPad in the dash – iPads are fine in your living room, but not at 80mph,” said Callum.

A full-length glass roof pours in daylight and helps maximise the feeling of space, while the area beneath the dash where a transmission tunnel would normally be is kept completely clear. And then there’s the details, the flashes of personality that Callum calls “the sort of stuff, being British, you do because you can”.

Cricket-ball stitching on the leather seats, the coordinates of the design studio lasered into the dash, the imprint of a glove on a tray above the glovebox, all as necessary as an ashtray on a motorbike, but key in showing this is a car designed by passionate human beings, not pie charts. 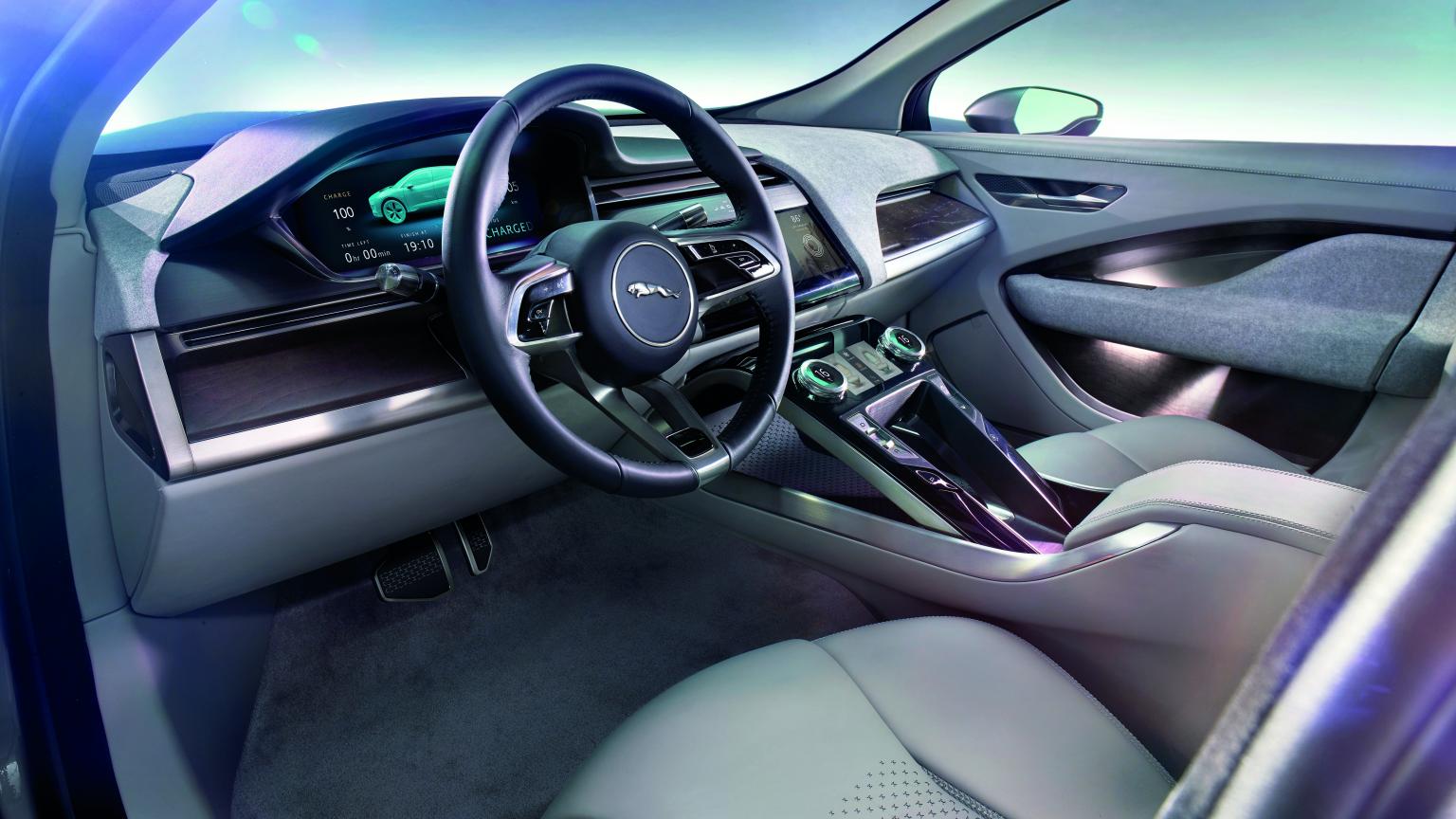 And yet Jaguar could be saving its ultimate weapon until last, because the I-Pace’s price should be remarkably palatable. We’ll know precise figures when the full production car is revealed in late 2017, but for now Jag says add 10 or 15 per cent to a similarly equipped F-Pace and you’re there. So, if a top-spec V6 F-Pace costs around £52k, that makes the I-Pace a snip at £60k.

Compare that with the Tesla Model X, which starts from £73k for a 60D, the cheapest Model X it sells in the UK, capable of 0-100kph in six seconds and 416km on a charge. Seven seats, although not offered on the I-Pace, are a £3,600 option on the Tesla, too.

Callum is bullish about its chances: “One of the main reasons we’ve done an electric car this way, is that our number one selling vehicle is the F-Pace, and we want to give the I-Pace the best opportunity to find a market straight away, without any hesitation. We don’t want any excuses.” Deliver on the price, performance and revolutionary styling, and they won’t need them.