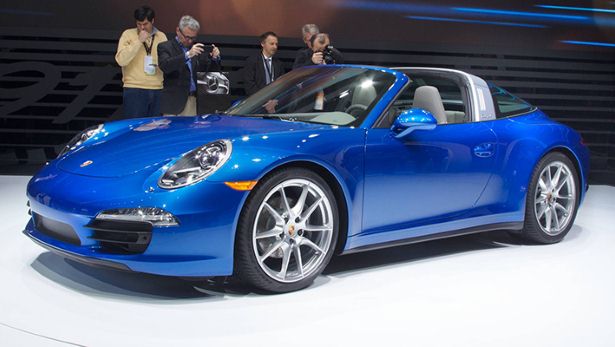 This is the brand new Porsche 911 Targa, unveiled at the Detroit Motor Show. And it looks fantastic.

Though we suspect you will require some more information other than the blindingly obvious, so here we go. Underneath it's the latest generation of the Porsche 911; up to the windowline it's identical to a 911 Carrera 4 Cabrio, though above this, it's the latest version of that classic 60s icon. Here you get a soft-top and glass rear window panel. And there's no c-pillar, as you can see. It weighs 20kg heavier than even the Cabrio, mind.

Press a button, and the rear window opens and tilts. Simultaneously, two flaps open in the Targa bar, releasing the soft part of the roof which then folds into a Z-shape and stows behind the rear seats. Then the flaps in the bar and rear window close, and the whole process is said to take 19 seconds (both ways). See? Easy. That said, you can't open or close it while on the move because the roof mechanism is heavy and wobbly on its levers.

You get a little more, too: a leather interior, sports seats, climate control, a 7in colour touchscreen, stability control and traction control. Plump for the range-topping Targa 4S, and you also get Porsche Active Suspension Management, torque vectoring with a limited slip diff, and 20in wheels.

And if you're wondering, the name Targa is taken from the Targa Florio race. See? We can be informative.