Meet the man who designed the Enzo 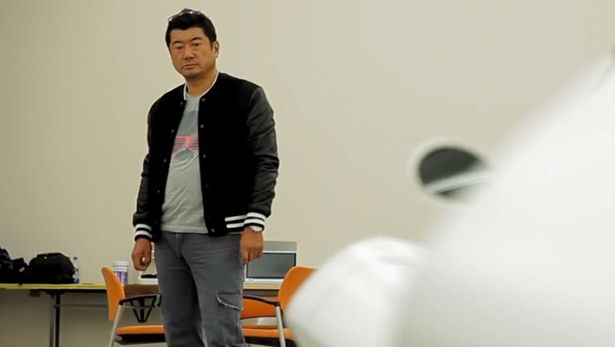 If you had the Ferrari Enzo and Maserati Quattroporte - the pretty one - on your CV, what would you do for an encore?

If you are Ken Okuyama, extrovert former design director at Pininfarina, you move from Turin back home to Japan, and get to work building your own design consultancy.

Top Gear featured Ken's KO7, a lissom little roadster part_commissioned by TAG Heuer and his launch project, back in 2008 (issue 180, in fact). We noted that it had shades of Fiat X1/9 to it.

"I hadn't thought of that but I used to own one of those and you're right!" Ken conceded at the time. "I'm a Lotus Super Seven freak, and I wanted to create something minimal but very strong. Simplicity was a big driving force. That was a philosophy Colin Chapman was committed to, and it's something that's been missing in the car business lately."

It was a great calling card, and in the five years since we last saw him lots of people have indeed called, including the East Japan Rail Company who commissioned Okuyama to create a new_look ‘Super Komachi' Shinkansen (aka ‘Bullet' train _ its design was inspired by the Akita region's Namahage demon), and a tractor for heavy industry company Yanmar.

Ken has also launched his own eyewear range, using forged titanium and aluminium for lighter construction but additional strength, as well as a range of cutlery, bespoke luggage, and kitchen utensils. None of it is cheap, but it's all beautifully made and effortlessly cool. When could you last say that about a teapot or train?

TG.com caught up with the great man in Tokyo recently, where his long_awaited new automotive project, Kode9, was debuting alongside an even lighter iteration of the KO7, now called the Kode7. All three use the central part of the Lotus Elise tub, with bespoke aluminium front and rear subframes.

The 9 is the product of all sorts of genius influences, including the Speed Racer Mach 5 (from the famous '60s Japanese anime series Mach Go Go Go, later adapted by the Wachowski brothers' for their ill_fated 2008 Hollywood movie), the 1950s Alfa Romeo Disco Volante, the Jaguar D_type, the '63 Corvette, and Alfa's 1964 Canguro Paris show concept car. But this is Ken's car, in more ways than one. "Usually, I design something with the customer in mind," he says, a pair of racing goggles hanging round his neck. "But in this case I am the customer, and if people don't like it, who cares?"

The Kode9 is powered by Honda's redoubtable 2.0_litre VTEC unit, boosted by an HKS supercharger and now good for 370bhp, which translates to ‘officially interesting' in a car that weighs less than 900kg, especially as the driver's foot is the limit of the traction control. The brakes are from racing specialist Akebono, the roof is made of carbon fibre, and the door mirrors are the same red as one of Ken's bullet trains.

He plans to build half a dozen next year, with a further 20 scheduled in 2015, yours for about £100,000 a pop, if you can lay your hands on one (ten Kode7's have been sold, all to Japanese collectors, so these cars are super exclusive).

As with the 7, the partnership with TAG Heuer extends to a detachable timepiece, this time a handsome Grand Carrera chronograph in a carbon bezel, which clips into a specially milled aluminium receptacle in the centre of the dash. It's a supremely cool touch in its own right, but also a throwback to Heuer's 1911 dash_mounted ‘Time of Trip' and the pioneering days of motoring.

More a collection of favourite styling themes than a coherent design in its own right, Ken happily admits that the 9's blistered wheelarches give the car a deliberately over_bodied look, which should make the narrow sills and body sides look uncomfortable.

Yet pure inspiration somehow keeps it all hanging together. Besides, Okuyama is the inheritor of the sadly diminished Italian carrozzeria coach_building tradition, and they were mostly a bunch of eccentric artisans with a line in charming oddities, bankrolled by whimsical millionaire playboys and industrialists.

Okuyama may have relocated to the Far East, but he's channelling the same spirit while wearing funky glasses and knocking out the odd bit of farm machinery. For which we salute him.