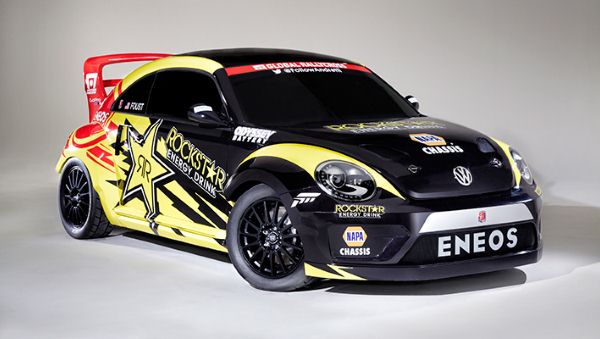 That GRC stands for Global Rallycross (not to be confused with World Rallycross, where the Peugeot 208 T16 will compete): this Rockstar-liveried Beetle will be VW Andretti Autosport's entrant for the second half of the season.

Drivers include the excellently named Scott Speed (a former Toro Rosso driver who was replaced by Vettel), and TG USA's very own Tanner Foust.

It's got a 2.0-litre TSI engine producing a very, very turbocharged 560bhp. Actually, VW tells us it has ‘more than' 560bhp. It's also four-wheel-drive, and completely, utterly bonkers.

And if you're wondering whether a 2.0-litre Beetle engine can manage 560bhp without going pop, don't forget TG has actually driven a 2.0-litre, four-cylinder 500bhp Beetle in Los Angeles (along with that 500bhp Golf GTI concept), and it was very, very fast. And laggy.

And about that second-half-of-the-season thing. VW says it wants to run a modified Polo rally car for the first, and then switch to the Beetle.

We don't know why, but the Polo is built on the same chassis that won last year's World Rally Championship. So again, no slouch.

We are expecting many fireworks to occur during the running of the 2014 Global Rallycross season - which kicks off at Top Gear Live in Barbados later this year - because we rather like this Beetle.