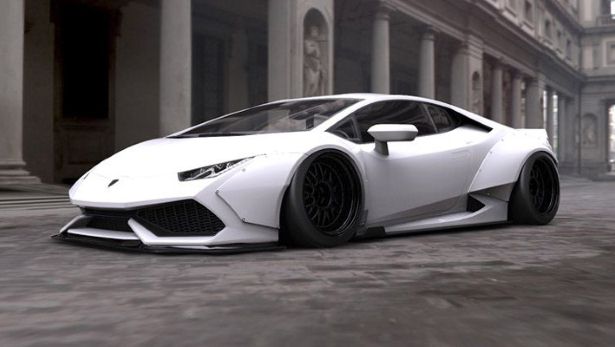 We're no strangers to Liberty Walk. First came the bonkers Ferrari 458 Italia, modified to within an inch of its life. Then an Aventador so wide that its arches resided in separate postcodes.

Now we've gotten a first glimpse of the Japanese tuner's plans for the new Lamborghini Huracan. This is it.

As ever, LW has toyed with the Huracan's sharp lines in the same way a tiger toys with its evening meal. That snow-plough front, the rear wings dotted with visible rivets, the XXL side sills, the so-low-it's-scraping ride height, the rear diffuser and spoiler arrangement, the deep-dish alloy wheels and slick tyres - not one for the wallflowers amongst you, it's fair to say.

There's no word on any performance upgrades, though we suspect the ride height of this rendered version might increase a little, lest the LW Huracan launch itself tail over bonnet after running over a pebble.

Whaddya think? And - before we take shelter for writing this - is it wrong that we think it just about suits the Lamborghini ethos? No?