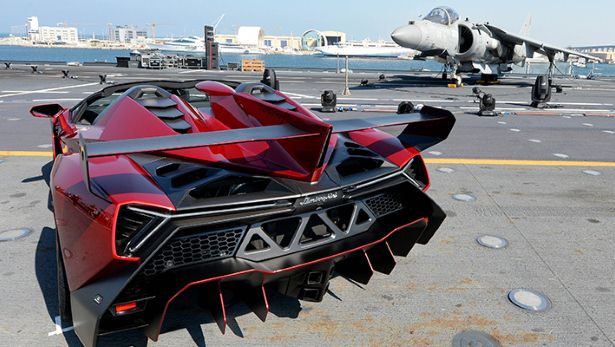 When Lamborghini wants to show off its latest, maddest hyper_convertible on its first public appearance, it slaps it on the deck of a warship. An Italian warship.

Yes, in an exercise apparently demonstrating (a) the superiority of Italian_made goods and (b) the appointment of a nine_year_old boy somewhere high up in the Sant'Agata management structure, Lambo has parked its very expensive, very pointy and very exclusive limited_run Veneno Roadster next to a Harrier Jump Jet on the Italian navy's 240_metre aircraft carrier in Abu Dhabi.

If ever there was a car that didn't require a massive, weaponised boat to boost its visual oomph, it's the 740bhp, V12_engined, styled_with_a_cheesegrater roofless Veneno. At the same time, we're not complaining, because, y'know... it's a pointy Lambo and a warship. What's not to like?

Even so, a word of warning: 220mph hypercar, aircraft carrier... best keep Black Stig away from the Persian Gulf for a while. Remember what happened last time?

Clearly the military_hardware_plus_hypercar gauntlet has been thrown down to Lambo's arch_rival. Let's see a LaFerrari strapped to the fuselage of an SR_71 Blackbird, Maranello...