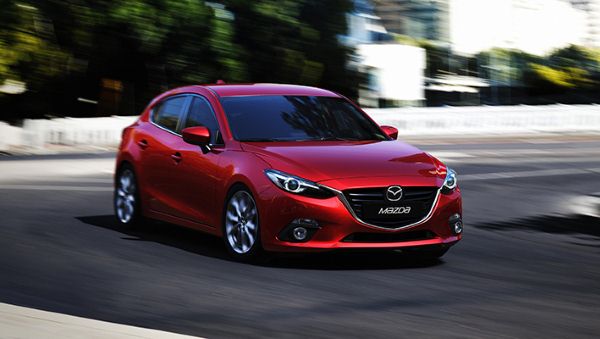 The Mazda3 is the Japanese firm's rival to the Ford Focus and Vauxhall Astra. If this had slipped your mind, don't be ashamed: in the near-decade the current 3 has been on sale, it has slowly slipped the mind of most of the rest of Britain, too.

But now here's an all-new Mazda3, one far less likely to blend into the forgettable background of one of the UK's toughest sectors. Looks smart, doesn't it?

The new 3 is wider, lower and - beneath that now-familiar Mazda face and those sculpted lines - is lighter than before, the base model weighing some 80kg less than the outgoing 1.6. Yet the new 3 is 30 per cent stiffer too, with a new brace fitted to ‘suppress body deformation when cornering'.

That gives some indication as to Mazda's intent, and it continues with some more superlatives such as "neutral steering, smooth, predictable pitch and roll, and harmonious linear responsiveness". We'll do the road-testerisms, thanks Mazda, but it does sound promising. Suspension is lighter and tighter too, there's a reworked power steering system, and a ‘brake booster'.

Inside, the cabin has been rebigulated, with redesigned seats, a centre-focused driver space, a head-up display, ‘black keynote colours' and a boot with 10 extra litres of storage space than before. There is of course, lots of connectivity, a Bose sound system, new sat nav, Bluetooth, smartphone integration and a litany of safety features.