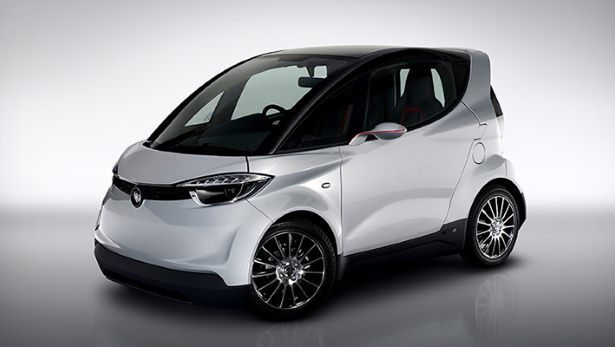 Last year, James May spent some time with legendary designer Gordon Murray – he of the most revolutionary F1 cars of the Seventies and Eighties, plus a little thing called the McLaren F1 – finding out about his T25 and T27 city cars, and Murray’s patented ‘iStream’ manufacturing process they previewed.

Well, good news: Murray has teamed up with Yamaha to implement his genius iStream system in this, the Motiv city car.

It’s a lightweight two-seater that makes the Smart ForTwo look like an overgrown lardbucket: though the Motiv is the same length as the Smart, it’s 5cm narrower and 6cm lower.

The ‘Motiv.E’ previewed at the Tokyo show is all-electric, and weighs just 730kg including lithium ion battery. With a 35bhp/661lb ft (yes, you read that last number correctly) electric motor driving the rear wheels, Murray says the Motiv.E will take around 15 seconds to reach 62mph, top out just a few mph above that and do 100 miles or so on a single charge.

But the production Motiv could equally be powered by a small petrol engine, likely one adhering to Japan’s stringent kei car regulations. Whatever the powertrain, it’s unlikely to steer like a mobility scooter: Murray, remember, is a card-carrying car-lover, and promises “an exciting and high quality driving experience.”

The Motiv should also be quicker to produce, and quicker to modify, than any existing road car. iStream aims to escape the inflexibility of modern monocoque construction and its massive up-front costs, moving to a system of simple steel spaceframes wrapped in recycled, composite monocoque panels.

The Motiv is a concept for now, with production still some way off. But if and when it reaches the road, this could be, in its small, sustainable way, one of the biggest cars of the decade. Excited? We are…