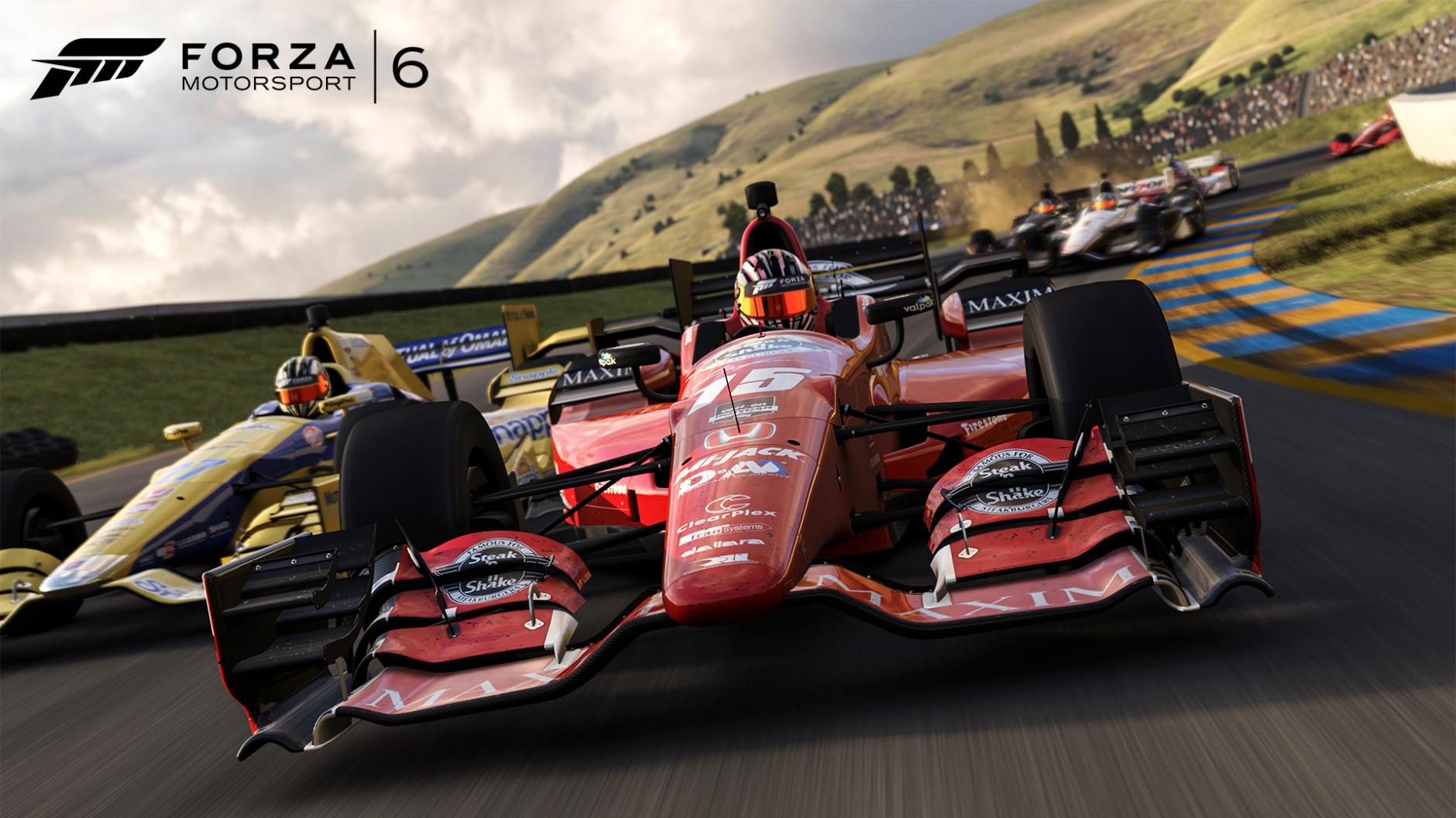 Microsoft's brand new, money-no-object racing simulator, released on September 15, certainly has the numbers. Forza Motorsport 6 has 460 cars to choose from, 26 locations, 24 cars on circuit at any one time, and approximately a billion individually rendered raindrops, probably.

The thing is that the last game in the series, Forza Motorsport 5, had some impressive numbers as well, but in the hurry to bundle it with the (at the time) brand new Xbox One, it unceremoniously flubbed a few crucial things. The worst offender was a handling model that would occasionally misbehave and fling you into the weeds without warning. We can only assume the studio's resident Carol Vorderman forgot to carry the four in some crucial equation. 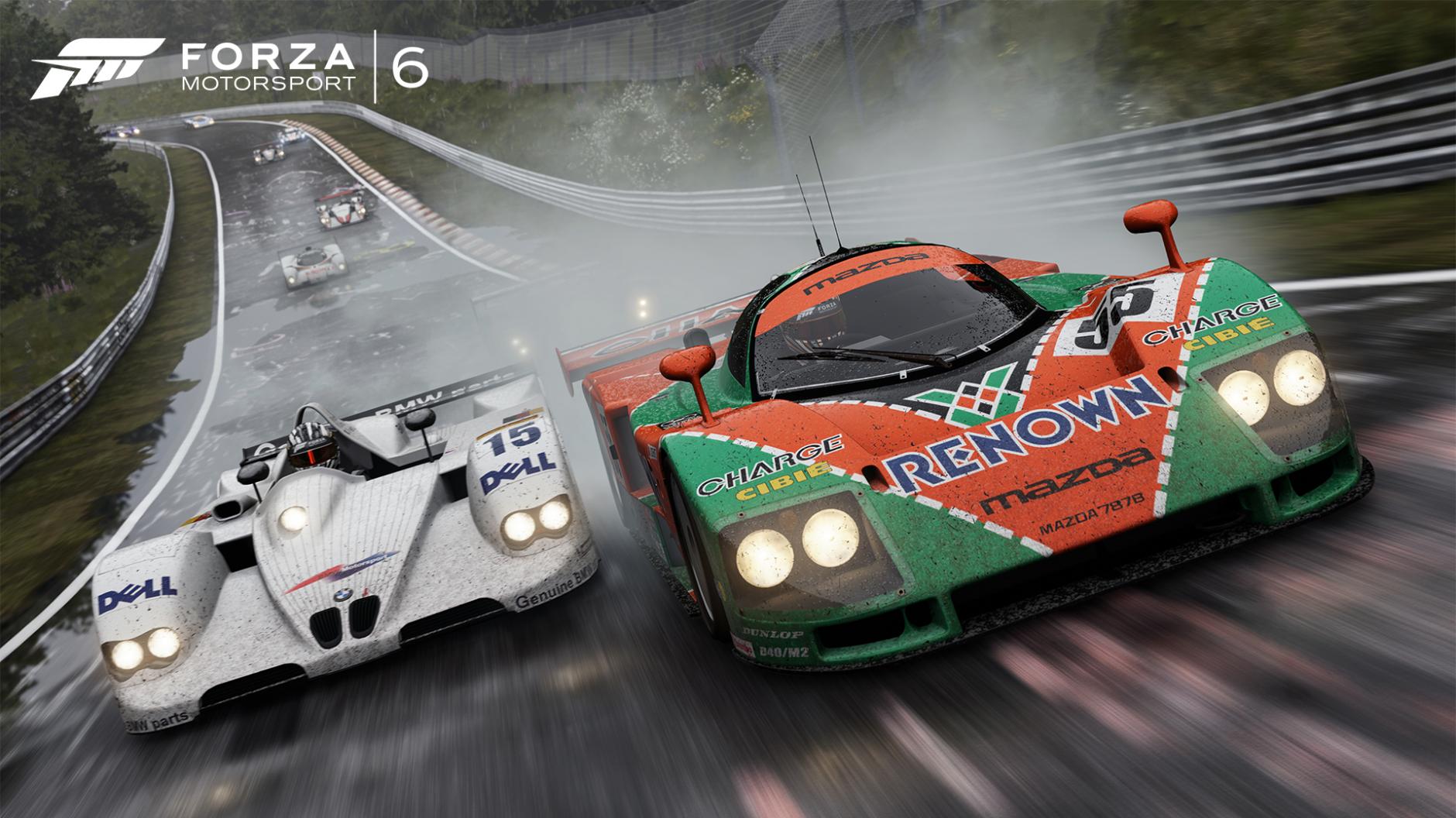 Fortunately that's been fixed for Forza 6. We're pleased to report that the faster cars still have the capacity to scare yesterday's lunch out of you, but this time around it'll be entirely your own fault. You'll be glad your car adheres to the fundamental laws of the universe too, because you've got slippery wet races to deal with now.

Unlike Project CARS' dynamically changing conditions, Forza 6's weather has two speeds: either a bone dry summer's day or rain so torrential that you could reasonably expect to be overtaken by Noah's Ark. The bad news is that means you miss out on all the interesting stages in between, where grip is far less predictable and strategic drivers can make up ground. Still, rain races are undeniably thrilling, with you plunging through the sort of lake-sized puddles that usually form temptingly close to bus stop queues. 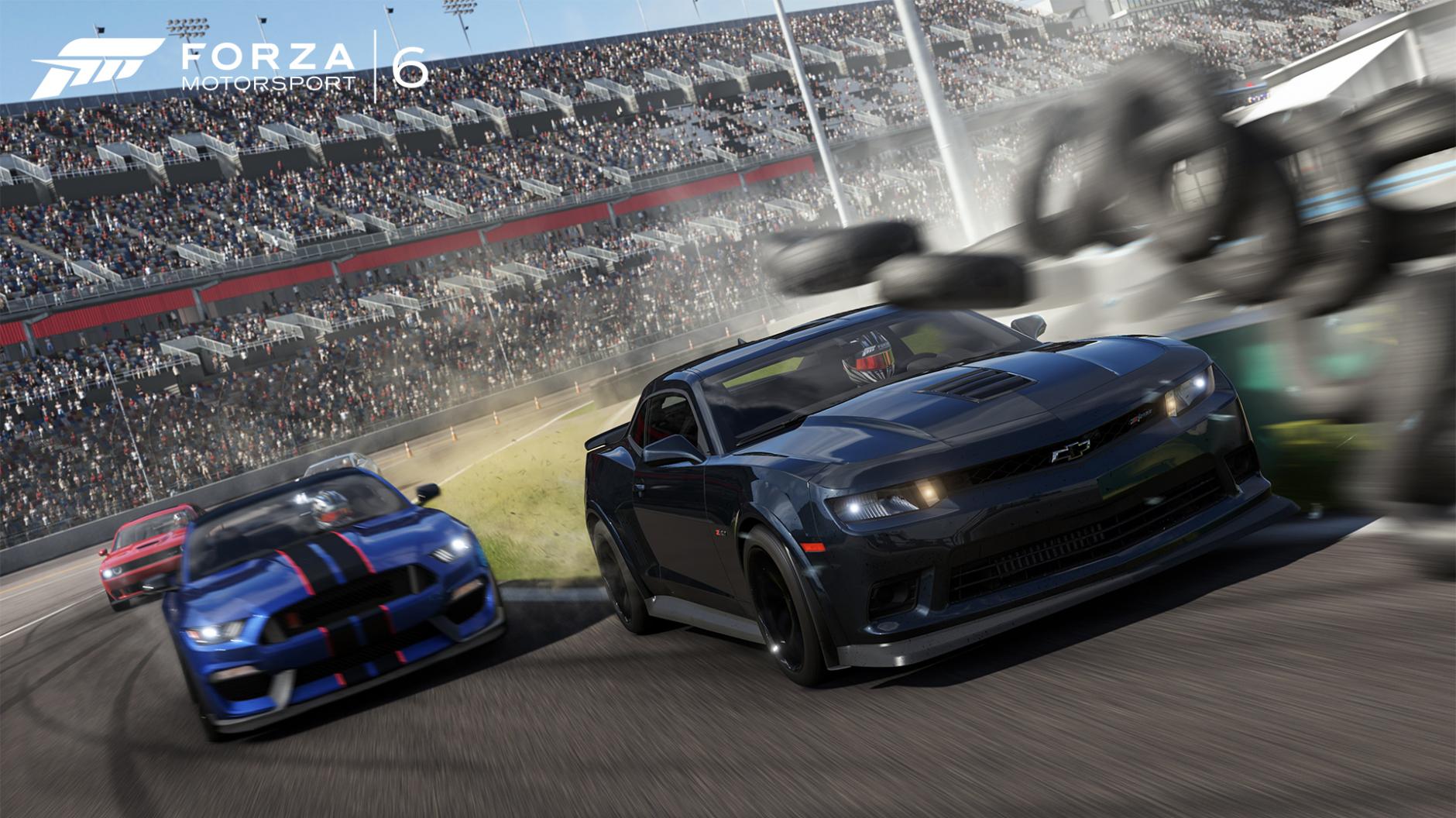 Forza Motorsport 6 solves another important element the previous game struggled with: making every race feel meaningful. Forza 5 essentially dumped its entire catalogue of cars and circuits in your lap and expected you to entertain yourself. This new edition provides the two key missing pieces: structure and context.

Structure comes from a more organised career mode, with curated championships based around a particular theme, such as night racing or US circuits, and a broad progression towards ever-faster machinery. It'll keep you busy for tens of hours and the game's also more generous this time around, tossing out cash and new cars out enthusiastically. 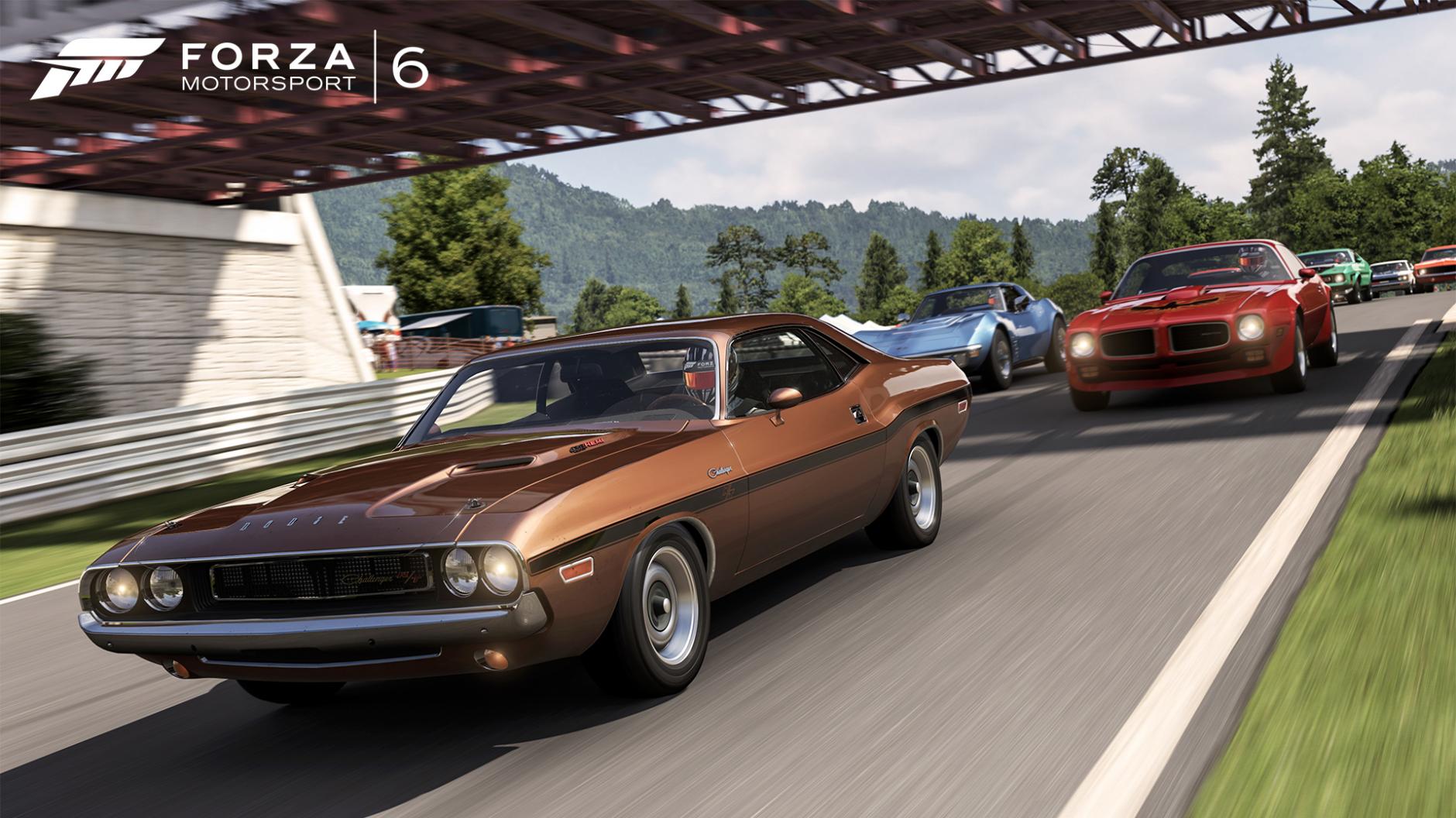 The context bit is even more exciting. New additional Showcase events place you in a specific car, on a specific track and with a specific set of opponents or objectives and are Forza Motorsport 6 at its very best. The scenarios are plumbed from racing history, modern motorsport disciplines and, of course, TG.

Forza 5 didn't seem to understand that racing a 70s Formula One car in direct competition against a LaFerrari feels like hokey videogame nonsense. Forza 6, on the other hand, can rustle up multi-class racing at Le Mans, the entire Formula E grid and a certain tame racing driver's digital cousin. A little drama and authenticity goes a long way. 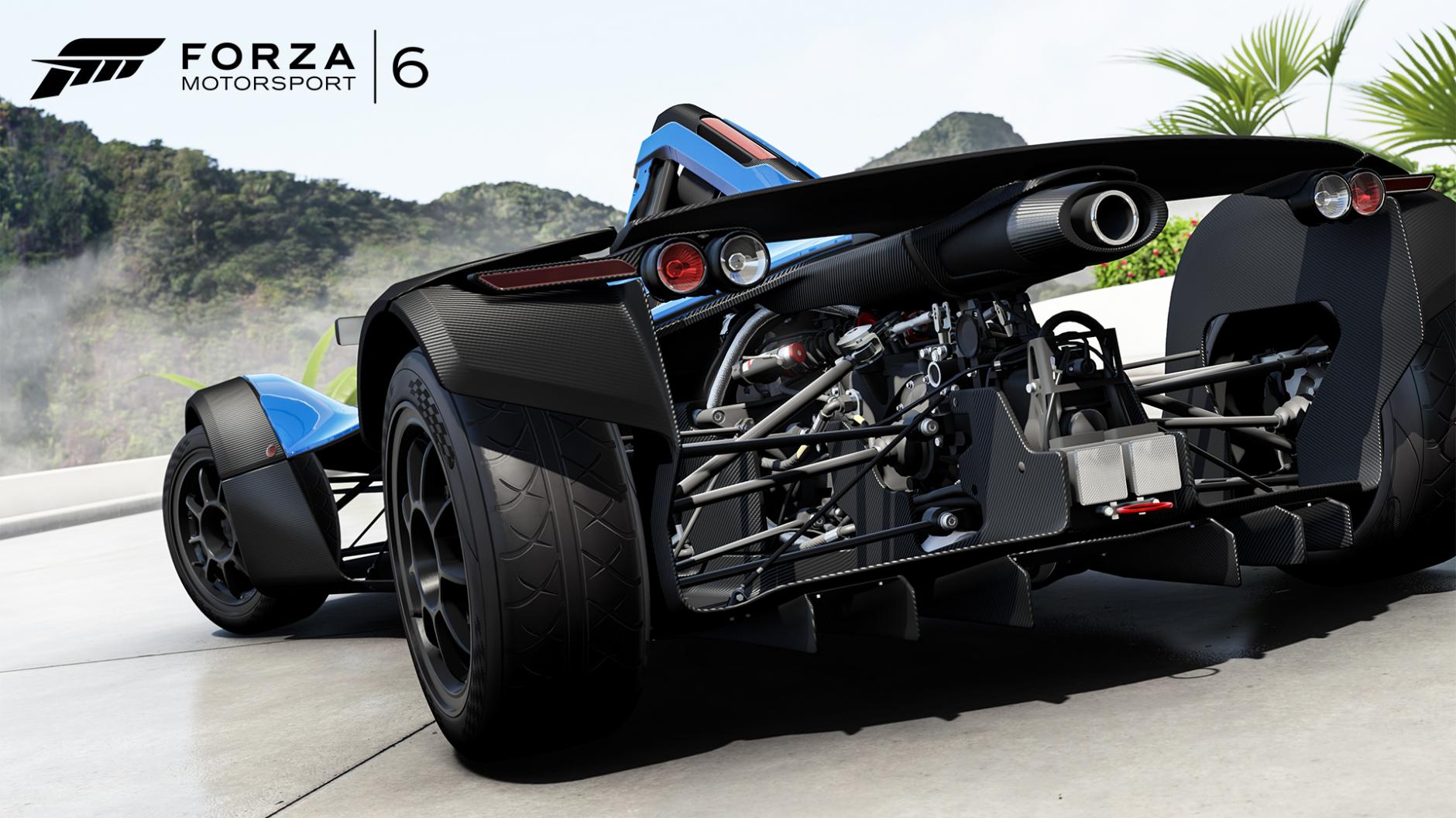 Of course that authenticity does evaporate when the artificial intelligence has one of its rare moments of catastrophic brain fade. The first Showcase event the game proudly offers up to you is an Indycar race around Indianapolis, which descends immediately into carbon fibre chaos as a field of 23 AI drivers all cautiously brake for the easy flat first corner.

They only seem to struggle in certain specific circumstances and, according to developer Turn 10, the 'Drivatar' system that does the thinking for your opponents should learn and improve as people play the game, but right now it can occasionally feel like you've accidentally stumbled into a remedial driving school during reverse parking practice.

Ultimately, Forza Motorsport 6 remains the biggest budget racing game on the block, but the important thing is that money has been spent in a more considered, more passionate way this time around. The result is a vast game that treats each corner of automotive culture as unique and important, stays true to the word 'motorsport' in its title and offers something for all but the most contrary of car fans. Now if you'll excuse us, we're descending into our nerd cave; you can expect to see us some time next June...