Full-throttle in the Ford GT 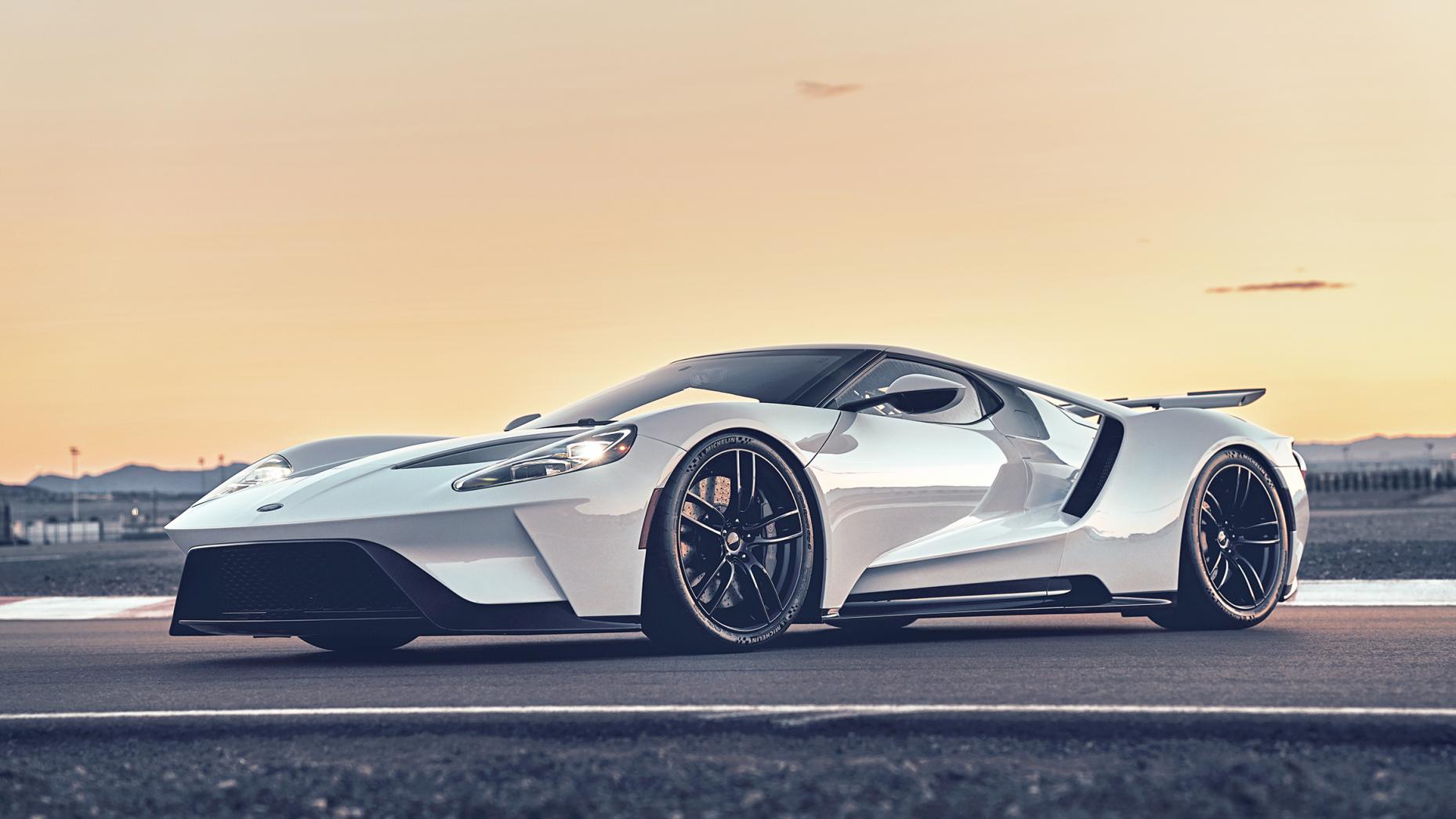 Shivering in a windswept car park next to Las Vegas Motor Speedway in near sub-zero temperatures, we watch as a pair of the US Air Force’s finest fighting machinery, F-22 Raptors, slingshot into the crystal blue winter sky out of Nellis Air Force base. Engines on full reheat, every metallic sinew stretched to near breaking point in their quest to gain altitude and speed as quickly as possible. 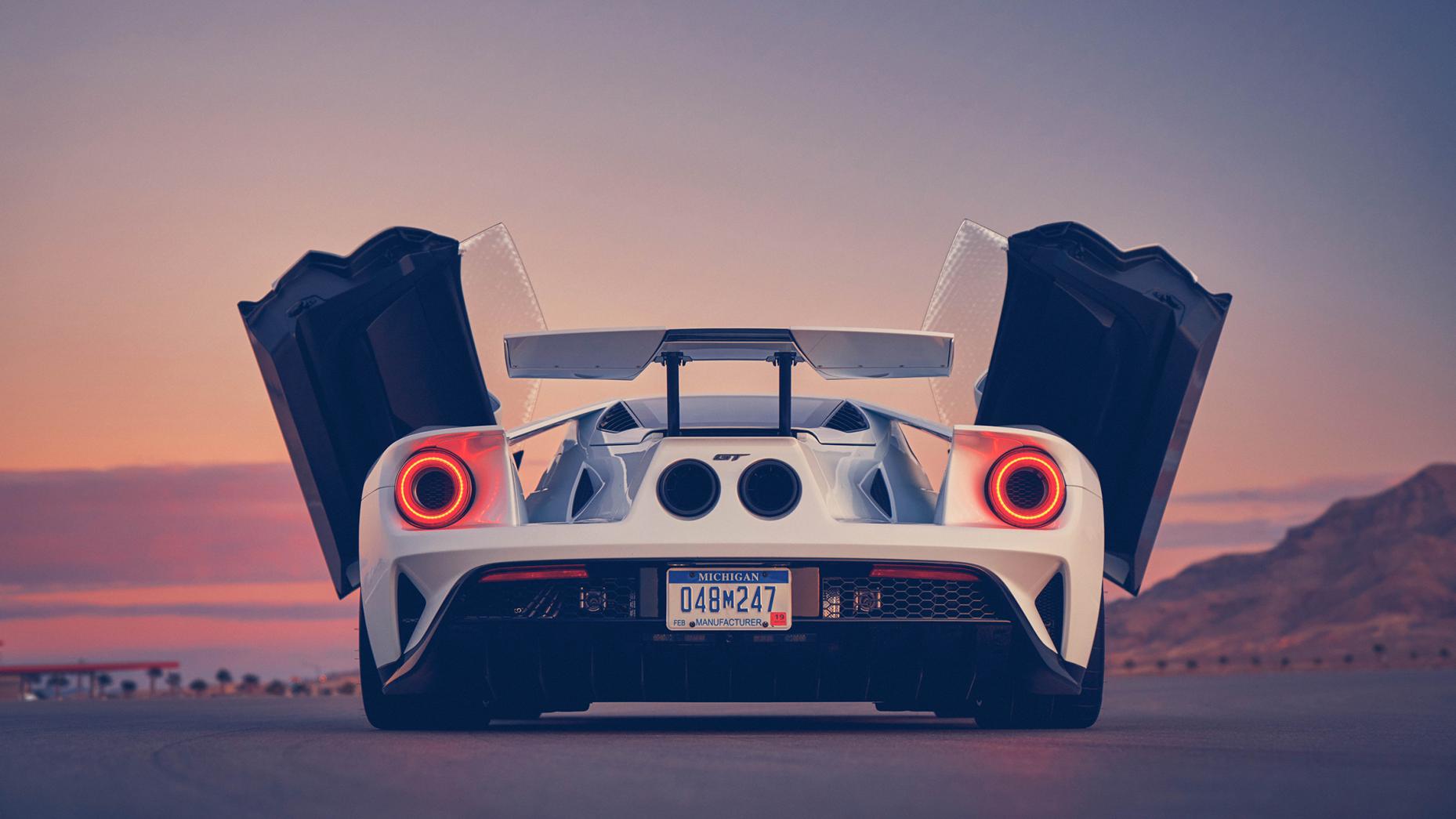 As they vaporise into the heavens in a blur of heat haze and crackling jet noise, it’s hard not to draw a comparison between the super-secret jets and the blue and white Ford GTs lurking just a couple of feet away from us. Both bleeding-edge, bunker-developed US-built products packed with still-secret technologies. Both, quite possibly, the fastest, most advanced of their breed. And both, most importantly, with a whacking great set of afterburners. 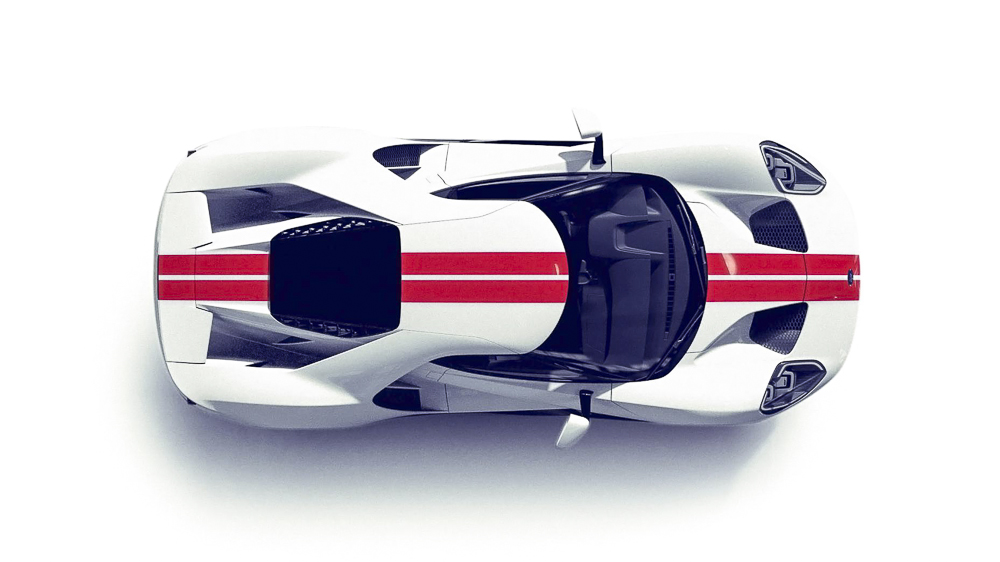 The only key difference right now is that, while it will be decades before we can truly understand the total capabilities of the F-22 – it’s so secret it cannot be exported to any other country – in the next few minutes we are not only going to find out a raft of new things about the next Ford GT. We – just three people – are also going to get to experience the car for the first time on a track. 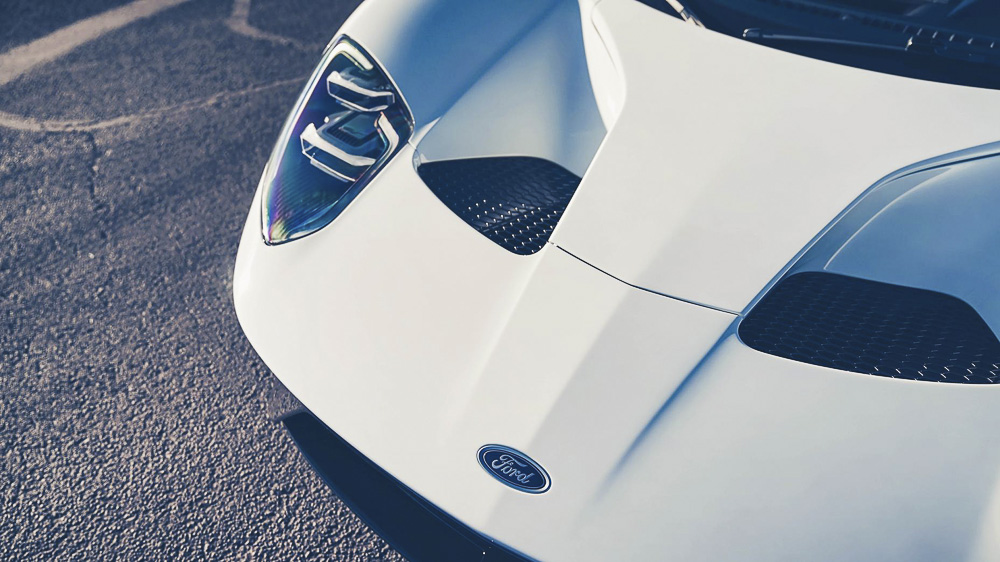 Not drive it, mind – that idea got nixed a week earlier to much gnashing of teeth – but be driven in a near-finished car, first by Ford head product honcho Raj Nair. Then, with everything up to temperature, do a few laps with 2016 Ford GT Le Mans-winner Joey Hand. The track is a little-used testing facility, so it’s very green and slippery. Plus, it’s covered in a fine layer of wind-blown desert dust and grit. So it’s not far short of a skating rink. 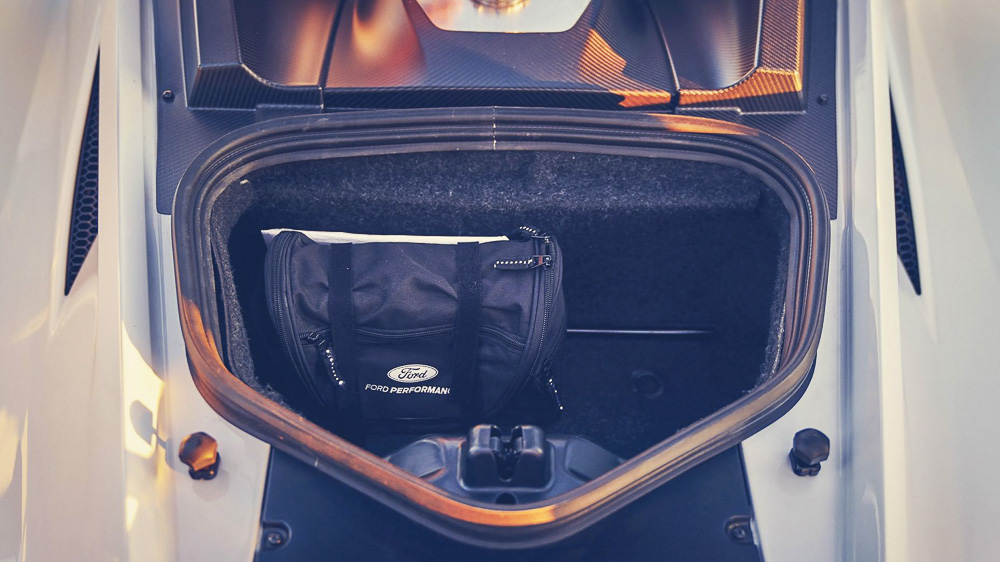 But that’s Raj and Joey’s problem. First order of business is to walk around the car and see what new things we can uncover on this all-but production-quality GT. The only things obviously missing on this car, which is going to spend its life at the Ford Performance school at the Utah Motorsports Campus, are final-spec software for the main screen and, yes, the cupholder. 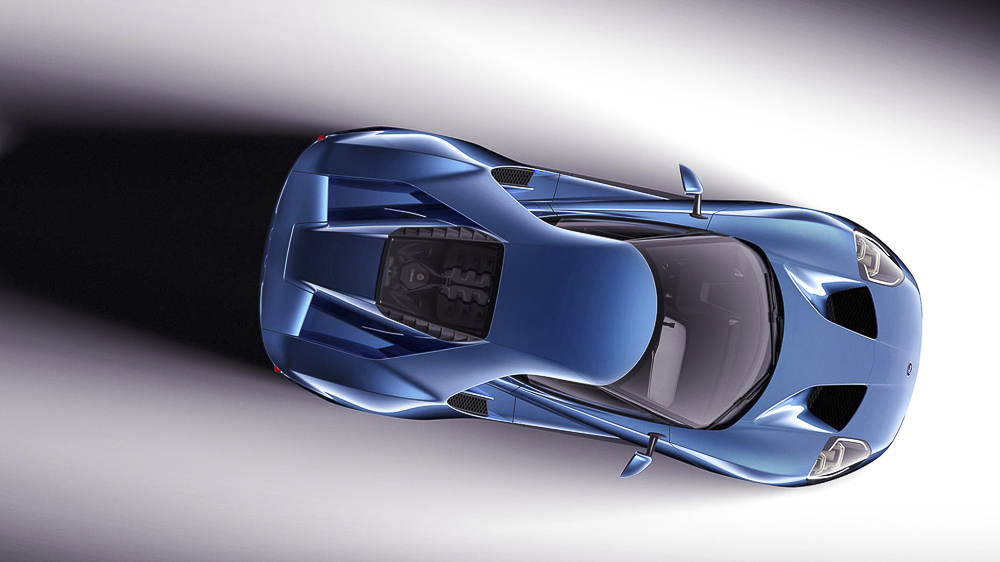 We start at the front of the car with Raj and Dave Pericak – Ford Performance boss – on their knees with us pointing under the front bumper. “This is super cool,” says Raj. “It’s got an F1-style keel underneath [the benefits of this are the lower suspension arms can be attached to the car parallel with the road surface for optimum suspension geometry, mechanical grip and aero efficiency]. So we are generating a ton of downforce on the front.” 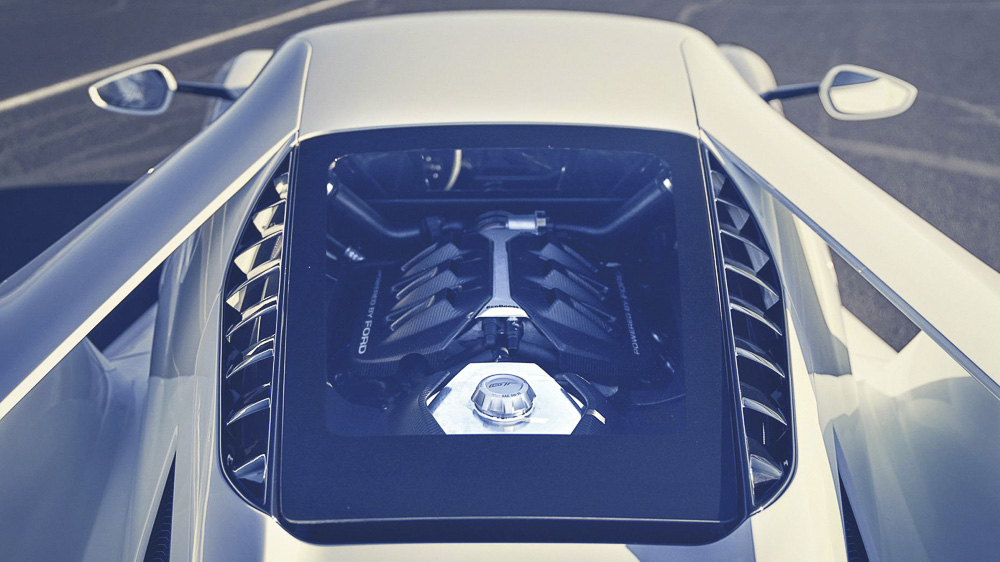 Almost too much as it turns out. “We knew we were going to get pretty good rear downforce with the buttress concept,” says Raj. “But we were generating more front downforce than we thought we would. So we had a centre of pressure problem – it was too far forward.” The centre of pressure is important as it affects the car’s handling. Too much pressure on the front causes oversteer. Too much on the rear leads to understeer. 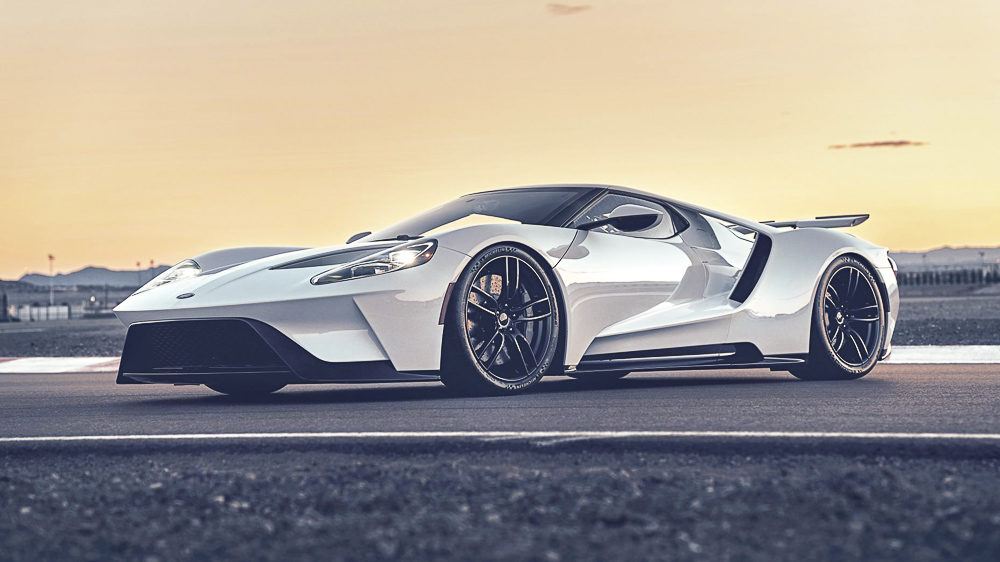 The solution? Active front flaps which regulate the downforce. “When the wing is down, the front doors are open. But when the wing is up, we can bring more downforce to the front end, so the doors close and keep the centre of pressure where we need it.” And the car planted firmly on the ground. How firmly? Raj isn’t saying just yet. “I’m not going to quote a number right now,” he says. “But I’m telling you, it’s significant.” 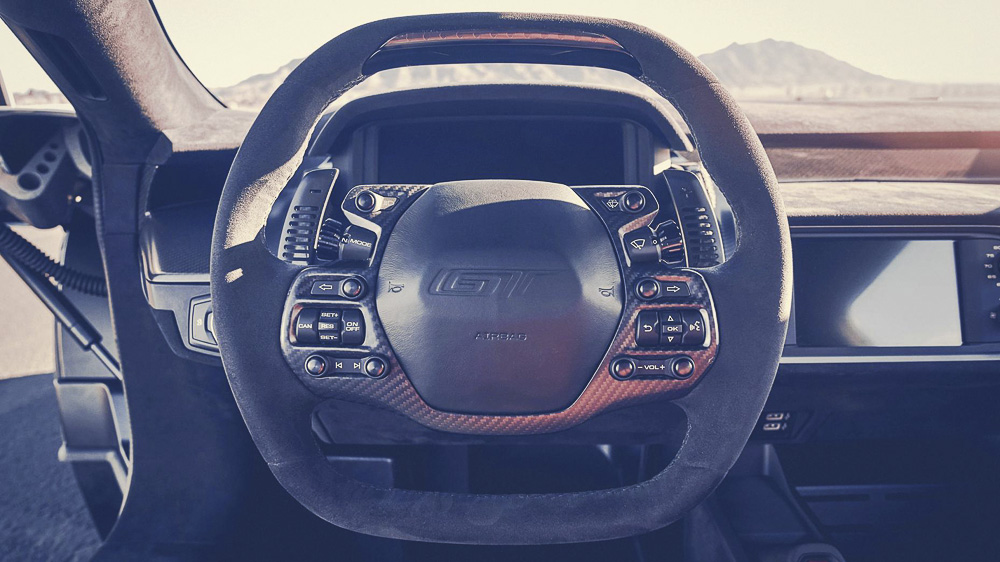 We don’t doubt that, especially after Dave shows us the rear wing. Far from being a simply profiled piece of plastic, it’s alive. Wedged into its profile is a cam and electric motors that change the wing’s shape according to the car’s speed and mode. When the central brain orders it to create maximum downforce or drag, the trailing edge pushes upwards to create a gurney flap, which disappears again when the wing is stowed. So if you didn’t know it was there you’d be none the wiser once the GT came to rest again. 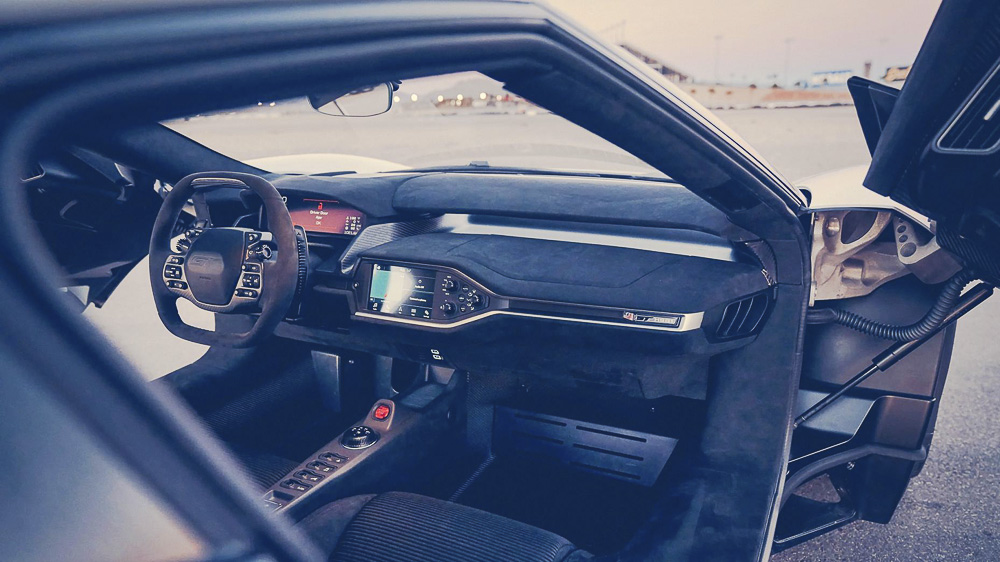 However, the wing is not the GT’s only party piece. The active aero is clever, but what makes it really special is that it works in sync with the active chassis. The GT’s normal ride height is 120mm, but rotate the five-mode driving-style dial (more about that in a minute) to VMax or Race mode, and the car drops like it’s falling in a vacuum on its Multimatic DSSV dampers to 70mm. It also jumps instantly back up to 120mm like it has been electrocuted when the dial is turned the other way. When a few millimetres difference in ride height can mean a second’s improvement in lap time on a racer, you start to get the idea how this 50mm drop, along with all the other aero bits, could completely change the GT’s performance. Two other side benefits of this sentient system, which is all hydraulic, is that, because the system was already there, the steering is hydraulic, too. Which, as good as electric systems have become, should mean outstanding steering feel through the F1-inspired squarish steering wheel. It also means the sleeping policeman axle lift is lightning fast, not one of those slowly inflating and deflating balloons you get on most other supercars. You press the button and it’s up. Then again and it’s down. No drama, no delays and your GT’s front end stays in one piece. Max speed with it up: 19kph. As Raj and Dave move to show us around the interior of the GT, Joey powers past the pits for the umpteenth time in his quest to bring the second, Liquid Blue, GT up to working temp. The car sounds good. Very good, which is a relief. After hearing the frankly flatulent racecar it didn’t bode well for the road GT’s sound signature. 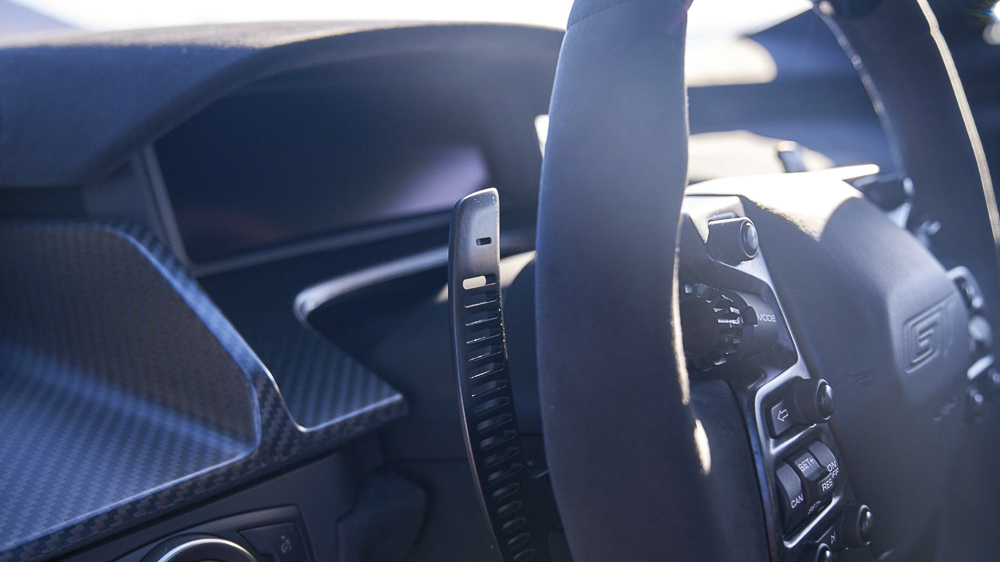 But not to worry. The road GT on full chat sounds just as visceral and urgent as any V8 engined race-bred road car. The reason for the racecar sounding so flat is its exhausts are side-exiting, so you only really hear half the engine at a time. The road car’s exhausts are at the back, so all the sound concentrates into one aggressive metallic wail. This is a good thing. Raj has now inserted himself into the cabin – you don’t just jump in, it’s a manoeuvre – and is starting to give us the first guided tour of the GT’s interior. First up: the seats. The base is fixed to comply with unbelted head protection rules, but the backrest adjusts for recline. So the pedals and the steering wheel move manually instead. The wheel actually has not one but two adjusters, one for the large – or coarse – in/out adjustments. And another for the fine tuning. Never seen that before. Likewise, the steering wheel isn’t like many supercars’ we’ve ever seen either. It’s got a cruise-control switch, for a start. On a Le Mans-winning car? Raj defends it as “You know, there are times when you’ve got to get from one curvy road to the next curvy road…” And it’s packed with other buttons and switches too (including Ferrari-style indicator buttons) as there is next to nothing other than a dial and row of buttons between the seats. On top left is the mode – choose from five: Normal, Wet, Sport, VMax and Track. Other interior firsts include a built-in steel race-legal roll cage. So it’s pretty well race-ready right off the production line. But that’s enough talk, now it’s time to feel what the GT is like moving around on a track. And when I say moving, I mean sideways… Having climbed into the passenger seat next to Raj (despite the GT’s broad stance, the cabin is very narrow, about the size of a Lotus Evora, so you literally rub shoulders with the driver) we shoot off down the pitlane and onto the track. Raj is busy giving me a running commentary about the car, which is in Sport mode, but I’m trying to soak up the whole experience. The GT feels tight, fluid and supple as it surges between the curves. The in-cabin soundtrack is not V8 great, but more than acceptable. In this mode it eases over the red and white kerbs and feels urgent between them. Damn, I want to drive it! As we come onto the home straight for the first time, Raj opens up the taps, and we rocket toward the 90° right-hander. It feels every bit as fast as any Ferrari, Lambo, McLaren or Porsche of a similar ilk. The GT benchmarks? The Ferrari 458 Speciale and the McLaren 675LT. After a slight dab on the brakes, Raj steers into the corner, exercises his right foot and, bam, there goes the rear end stepping out on us. “Ah, yes,” he says countersteering into the slide with a giggle. “That shows how, when in Sport mode, we open up the stability control which lets you slide the car around a little bit. In Normal mode, it wouldn’t have done that.” But then we continue, the car dancing left and right, Raj, a long-time second-gen GT owner, offering his views on the car’s handling capabilities. Next up, Joey – choice fact: he has never driven any other supercar than the GT – gives us a joy ride with the GT in Race mode. Raj had said it would be a night-and-day difference but, honestly, it wasn’t from the right-hand seat. Joey’s a fabulous driver and the car is travelling much faster now, but still has the same sense of unflappable calm to it. The track is still very slippy so it’s impossible for Joey to show me the limits of the brakes and handling, but it just feels extraordinarily solid and unshakeable around the whole lap. Climbing out of the car, then watching as it high-tails it down the pitlane again, we’ve learned several great new things about this extraordinary car. But the one key burning question remains – what is it like to drive? For the answer to that we are going to have to keep waiting a while longer.