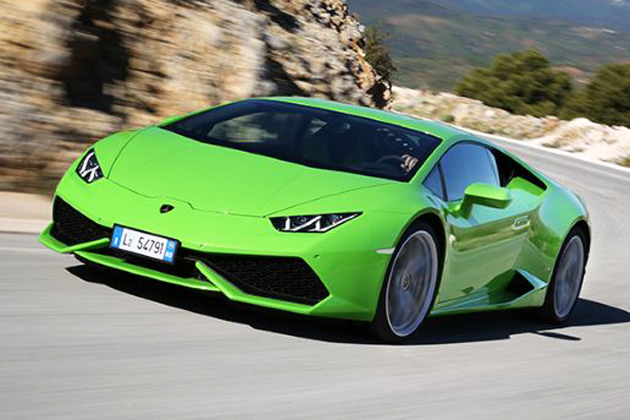 What is it?
It's a big one: Lamborghini's replacement for the best-selling car in its history. In over a decade of production, Lambo shifted 14,022 Gallardos, accounting for more than half of all the cars sold in the brands half-century existence. The all-new Huracan, then, has some pretty big boots to fill.

Is it really all-new?
It would be wrong to dismiss this as a refreshed Gallardo. Very wrong. In a marketplace containing the Ferrari 458 and McLaren’s 650S, anything other than a radical refresh of Lamborghini’s V10 formula would have the Huracan entering an automotive battleground severely outgunned.
So what's new then?

Pretty much everything. The Huracan features an all-new chassis structure, new suspension with new controlling electronics, new steering, a heavily revised engine and – maybe most significantly – a new seven-speed dual-clutch gearbox to replace the Gallardo’s clunking robotised manual. There's a new four-wheel drive system and new cabin, too. Point is, while it might not look radically different from the outside, this is a completely new car.

The Huracan, like the McLaren, uses RTM carbonfibre for its rear bulkhead, central tunnel and the rear part of the sills. From the rear bulkhead backwards, the frame is aluminium, like the 458 and the 650S. It's also aluminium from the base of the windscreen forwards, while body panels are made from aluminium, too. The chassis, then, is 10 per cent lighter than that of the Gallardo, but 50 per cent more rigid.

Tell me about the engine...
The good news is that Lamborghini has stuck to its roots in the engine department. In a supercar world increasingly turning to forced induction for performance, the Huracan is powered by a naturally aspirated 5.2-litre V10, which delivers 602bhp to all four wheels through that new double-clutcher.

All of which means the Huracan will smash 0-100km/h in 3.2sec, hit 200km/h in 9.9sec, and reach a v-max of ‘over 320km/h’, while drowning the surrounding countryside beneath one of the most iconic engine noises of the modern age, utterly unadulterated by forced induction. Good news.

Other good news comes in the form of the Huracan’s torque curve, with no less than 75 per cent of the V10's 560Nm available from just 1000rpm. Proof, if you needed it, that you can have low-end torque without turbos. A dry weight of 1422kg sees the Huracan deliver a power to weight of 423bhp per tonne, well north of the 458’s 378bhp per tonne and just a fraction behind the 12C.

Doesn’t it look a bit… sensible?
Truth is, Lamborghini has been the victim of its own success in the design department. During more than a decade in production, the Gallardo spawned some 40 different iterations, sprouting ever more aggressive wing packs as it aged.

Throw in the motor-show headline acts that are the Veneno, Aventador J and the Sesto Elemento, and the design of the ‘base’ Huracan was always in danger of looking a trifle safe.

But surely it’s the Aventador’s job to be the shock and awe of the supercar world, a job it does mighty well? The Huracan must appeal to a broader church, and while initial pictures may not have had the hairs on the back of your neck standing up, in the flesh it’s far finer: subtle yet striking. But be in no doubt though: this is merely the start of a genus of derivatives that will mutate in ever more aggressive directions.

What's it like on the inside?
As you drop into the driver's seat you're met a familiar, effective origami of aggressive lines. The Audi underpinnings might have robbed Lamborghini of a little Italian originality, but this interior exudes a quality that used to be a distant dream for Sant’Agata.

There's a new full-TFT screen (shared with the Audi TT, but with Lamborghini's own bespoke graphics) that you can configure to major on the rev counter, speedo or nav. Very clever.

The interior is surprisingly button-light, with most key functions including indicators and wipers now nestled on the steering wheel, like the 458. At the bottom of the wheel lurks a button Lamborghini describes as ‘Anima’. This translates as ‘soul’ and features three settings: Strada, Sport and Corsa.

These alter the parameters of the magnetorheological dampers, steering and traction settings, with Strada and Sport modes also making the V10 pop and bang hilariously on the over-run. Nice.

Visibility through the rear-view mirror is virtually non-existent, but can be improved by optioning the glass rear deck. This not only improves your view, but far more importantly puts the V10 on full display.

Driving a Lamborghini should feel like an event, and the start procedure for the Huracan is pure supercar theatre. Slam the door, flick the red ‘missile arm’ toggle forwards to reveal the pulsating start/stop button, press and you send the V10 barking to life. All is well in the world.

So how does it drive?
Our first shot in the Huracan is at the Ascari track under the baking glare of the Spanish sun. I'm led out by a Lamborghini test drivers in a lime green Aventador Roadster. After a sighting lap the pace builds, and as I uncoil the Huracan, two things become immediately clear. First, that the Huracan has traded in none of the Gallardo’s trademark Lamborghini DNA. The V10 is a fabulous accompaniment to proceedings and the perfect advert for the purity of a naturally aspirated engine, snarling its way to the 8500rpm with relish.

Secondly, the Huracan has a suppleness to its suspension that distinguishes it from the opposition. As the laps accumulate and the speed builds, it’s a suppleness that inspires real confidence, helping TG to stay pinned to the back of that Aventador in all but Ascari’s longest straight. This is a seriously rapid car.

The instant response of the new gearbox is fabulous, and a quantum leap forwards from the Gallardo’s thunky transmission. As are the stability systems, which Lambo says utilise the same technology that keeps complex fighter jets aloft, a fiendish combination of three accelerometers and three gyros. Well, if it's good enough for the EuroFighter...

Confident in the fact that there's a 4WD safety net in place, it’s easy to dig into the Huracan’s chassis capabilities. Dive into a corner too deep and initially the front end will wash wide, but counter that on the throttle and the nose nips back into line, as up to half that V10’s torque is pushed to the front axle, dragging you out of the bend and down to the next braking zone. The carbon ceramic brakes are fabulously strong, too, hauling the Huracan down from triple-figure speeds time and time again without fading.

The car we drove featured Lamborghini’s new active electric steering, which varies in rate depending upon ‘Anima’ setting, and can make minor adjustments to steering angle at the limit if necessary. Thankfully the active element is unobtrusive, and for 99 per cent of the time, 99 per cent of Huracan owners will merely be aware of a nicely weighted lightness to the steering in all types of driving.

After four track sessions it's clear the Huracan is a huge leap forward from its predecessor. This is a car that positively encourages you investigate the depths of its talents, and flatters you throughout the process. It's a car that knows its audience: those who want a car with huge potential, but enough of a buffer to encourage them closer to the limit.

What about on the road?
Just as impressive. The Huracan is as cheery pottering about at low revs in seventh as it is blistering down a mountain pass with a speed and surety that few can rival. It’s a car that’d destroy a trans-continental trek before eking every micron of grip from your favourite back road. It is, in other words, a supercar for the real world, if such a thing exists.

It was bone-dry during our time with the Huracan, but soon enough we'll find out how it handles a damp British B-road. I have no doubt it will shine. The pliancy of its ride, combined with the grip served through the 4WD and traction systems, could make this the supercar of choice for the UK. Time will tell. On the downside, those on-wheel indicator buttons are fiddly and annoying.

How does it compare to the Ferrari and McLaren?
According to the official numbers, the Huracan will split the 458 and 650S (on P-Zero Corsa tyres) on a 0-62mph dash, getting there a tenth of a second ahead of the Ferrari but two-tenths behind the McLaren. The Huracan’s top speed is identical to the Ferrari at 202mph, though the Lambo can’t match the McLaren’s 207mph max.

So if pub stats are all you care about, the 650S is a marginally faster braggin’ wagon. But supercars are about more than pure maths. They’re about drama, too, and Lamborghinis have been delivering high theatre since the 350GT first turned a wheel. The Huracan delivers more of the same.

Its uncluttered exterior might disappoint those who hoped the Huracan would be a production version of the Sesto Elemento. But the more time I spent with the shape, the more I loved it, and that sophisticated simplicity masks a car that oozes adrenaline from every pore.

By spurning the trend towards turbochargers, Lamborghini ran the risk of being outclassed in the performance credentials. No chance of that. The V10 is a masterpiece, not only dishing more than enough power to keep the 458 and 650S honest, but also delivering the life and soul of the Lamborghini experience. Chuck in that sublime new transmission, four-wheel drive, stability systems that can not only keep fighter jets in the air but subtly convince you of your own Driving God status, and it’s clear the Huracan is a mighty thorn in the side of the opposition.

The Gallardo was once described to me by one of Lamborghini's legendary test drivers as ‘the bull with no bulls**t’. A decade on, the Huracan more than lives up to that brief.