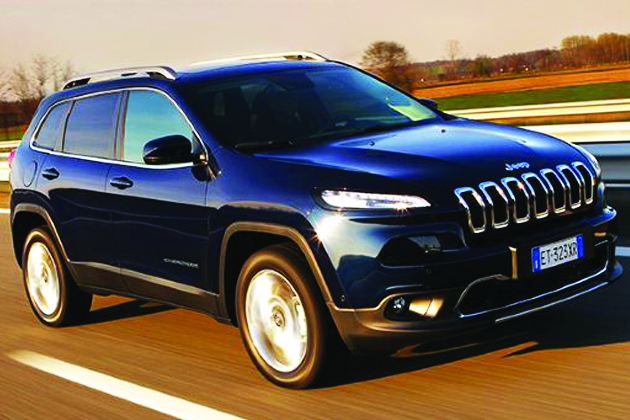 Whatever happened to the Jeep Cherokee?
Good question. It launched in the mid-'80s as a boxy off-roader, and did rather well over here as well as back home in the Land of the Free. But then it didn't have much opposition: the Freelander hadn't appeared and the German car makers still sneered at the idea of SUVs.

Then there was a second generation in 2001, the boggle-eyed one (Liberty in the US), but by that time the clunky mechanicals had been left well behind by the new breed of crossovers, so the Cherokee died an unlamented death several years ago.

Now the Cherokee's back, re-imagined for modern times. It's got successfully sleek, interestingly surfaced styling (yes, you do begin to get used to those split-level lights after a while). And under the skin, Jeep reckons the Cherokee has the smarts to compete with Europe's crossovers on refinement, handling and economy, while still providing Jeep's signature rock-climbing ability.

Off-road my backside. No-one does that in Britain, not in their shiny new family crossover anyway. What's it like ON the road?
Quite agreeable, provided you acknowledge its mission. In other words it has soft springs and long-travel suspension, because it goes off-road.

Off-road my ba-
OK, no-one does much off-roading. But the thing is, those spring rates give a lovely supple ride. And the suspension (multi-link at the rear) is sophisticated enough not to send a load of secondary shudders into the cabin.

So it leans like a sloop in corners?
True, it doesn't have the precise buttoned-down feel of a BMW X3. But the steering, though it goes oddly weighty at about five degrees off-centre, is precise enough and there's reasonable grip, plenty of traction out of bends, and decent braking confidence. So it's not nerve-wrackingly pendulous.

I'm hearing damnation by faint praise.
Calibrate your expectations. The Cherokee is set up for real driving by real people with real families in the back. It's got accurate steering and excellent comfort. It cruises motorways with superb quietness and excellent stability.

And the engines? A gas-guzzler with a crude slushbox?
Not at all. The one we tested had a 170bhp four-valve VGT turbodiesel, linked to a brand-new nine-speed (yes, nine) autobox. The engine's pretty refined, and the transmission chooses its gears well. Because there are so many steps, first is super-low for off-road hillocks or getting a trailer under way, while ninth gives you quiet, economical tickover cruising.

Trouble is, this is a biggish car and built impressively strong for, yes, off-roading, Result is, in 4x4 auto form it's 1950kg. The Cherokee is economical for a car that heavy, but it isn't quick. The 0-62 figure is the wrong side of 10 seconds. And it feels as leisurely as that.

How does it do as a family hack?
Pretty well. The back seat has loads of legroom, and if your spawn haven't yet grown gangly you can slide the rear seat forward for extra boot space. The cabin's dotted with 12V outlets and inputs for USB, aux and SD. The whole interior has more storage spaces than I could count, including one under the passenger seat cushion. If you rent a Cherokee for your US fly-drive, we guarantee you'll leave some vital possessions in the car when you hand it back.

One last piece of anti-American prejudice. How's the interior quality?
Hardly German-premium, but perfectly competitive against the Japanese or, say, a Freelander. But then, the Freelander is getting close to the end of its life and the Cherokee is new.

There is a FWD version... Wait, what?
There is a FWD version with a 140bhp version of this engine and manual transmission - that's just 139g/km CO2. Then you can have that drivetrain with the 4x4 system, or the 170bhp/auto/4WD combo. With each of those three drivetrains there are three trims: Longitude, Longitude with nav, and Limited. You don't need Limited - with the top drivetrain for BMW X3-ish prices.

But Jeep doesn't think it'll sell many front-drive Cherokees, because it's a Jeep, innit. You know, off-road freedom and all that. Or maybe things will work differently here. Who knows?

OK OK, you're clearly not going to shut up about this. So... drum roll... what's it like off-road?
Pretty serious. The critical stuff is engineered right in, which is why it's heavy. The bodyshell is strong. We drove it over some dire cross-twist obstacles and the litmus test - putting your fingers between the top of the door and the frames while driving along - evidenced very little flex. The clearance is decent. The auto has a nice low first. The suspension is game. It can also tow a two-and-a-half tonne trailer. Which is a whole lot of horseflesh.

But in some regions of the world they also sell a truly hardcore Cherokee, with a low-box, locking rear diff, higher ground clearance, re-shaped front spoiler for far better approach angles, and skid plates. It's called (adopt gravelly voice) Trailhawk. But that chassis comes only with the V6 petrol engine.