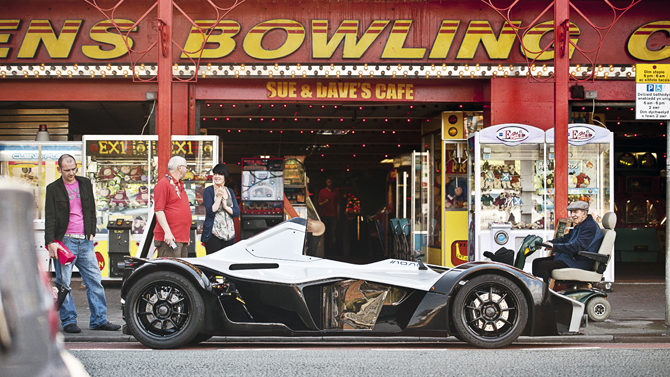 It would be easy to dismiss the single-seat BAC Mono as another garage-build special, another ‘racecar for the road' from a British start-up company, with a supercar-crushing power-to-weight ratio and a chassis constructed from bits of old washing machine and blind hope.

But the Mono is different, and not just because of its conspicuous lack of passenger seating. Though its headline stats are suitably devastating - 280bhp and a 540kg kerbweight means 519bhp per tonne, a 0-60mph time of 2.8 seconds and a top speed of 170mph - it's the sheer quality of the Mono that sets it apart. This is a pocket-sized masterpiece of engineering.

Directly behind the central seat, a Ford Duratec four-cylinder - worked over by Cosworth with a dry sump, forged pistons and con-rods - lurks exposed, butted up against a Xylon-coated six-speed sequential gearbox. This Hewland transmission, borrowed from an F3 racer, drives the rear wheels through a limited-slip differential. About the powertrain, the Mono's pushrod suspension clings gracefully to its tub like a spiders-web.

As the first media trusted to drive the Mono on the road, Top Gear is delighted to report that the BAC rides sublimely. With 10cm of wheel travel and perfectly judged damping, it bumbles over rutted city roads as calmly as a posh saloon. In fact, drive it gently and the Mono is astonishingly civilized and tractable, with none of the oh-bugger-it's-about-to-stall twitchiness of your run-of-the-mill trackday special.

But who wants to drive this thing gently? Find a few yards of open, empty road, wedge the accelerator deep into the pedal box and the Mono reveals itself to be... quick. Very quick. Absurdly quick. Quick enough to tear a neat single-seater hole in the space-time continuum. This midget monster serves up the sort of acceleration that leaves you screaming blind obscenities into your race helmet while simultaneously cackling like a madman.

Almost as shocking as that momentous, massless acceleration is how easy, how natural it is to drive the Mono fast. Lying almost on your back in the dead centre of the chassis, a wheel at each corner, engine behind your head and a never-ending slug of even, addictive power, it's an act of instinct to thread the Mono from corner to corner, rear tyres chatting convivially with your bottom.

At the very limit, there's a hint of understeer to prevent you headbutting the Armco, but for the most part, the BAC is deliciously neutral. If you're used to road cars - even supercars - the Mono requires a recalibration of your brain to its physics-warping abilities: brake deeper, turn in later, get on the power earlier. This is a supernaturally good track car.

Sure, £80,000 (roughly what you might pay for an Audi R8) is a lot of cash for a car that'll require you to strap your significant other to the roll-hoop if you're planning a romantic weekend away together but, given the sheer depths of its performance and engineering, the Mono looks like a bit of a bargain to me.

But pleasing mere humans is one thing. Impressing Top Gear's white suited racing driver is quite another. To find out what Stig thought of the BAC Mono when he thrashed it on track, you'll have to pick up this month's issue of Top Gear magazine...