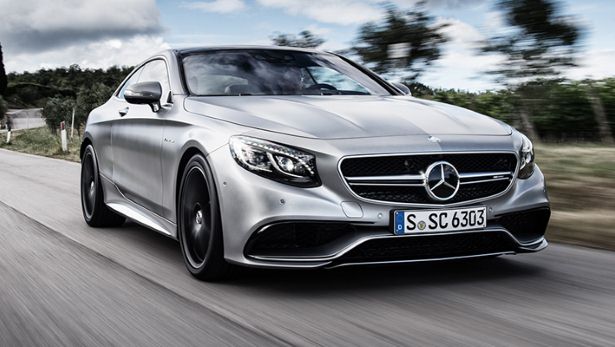 What is it?
It's the Mercedes S-Class Coupe 63 AMG 4MATIC - a snappy title, we're sure you'll agree. And as you can see from the pics, it's a two-door coupe based on the luxurious S-Class saloon.

But unlike the previous coupe version of the S-Class, the CL, Merc has tried a bit harder to distinguish between the two and four-door versions for this generation. As such, and in addition to the obvious external styling alterations, the coupe gets a unique interior treatment with a floating dash effect, different exhaust, shorter wheelbase and new suspension settings.

Exact prices haven't been released yet, but expect to pay a premium over the saloon. Other engines will be available - an S500, as well as the monstrous V12 65 AMG - but there are no plans for a diesel. Coupe customers just aren't the sorts of people who are worried about fuel economy apparently.

As this one is an AMG, presumably the engine is excellent?
Exactly. It's the 5.5-litre bi-turbo V8 producing 577bhp and 664lb ft. And because we're in a 4MATIC four-wheel drive version (sadly only available in left-hand drive), traction isn't an issue. 0-100km/h takes just 3.9 seconds. In something weighing over two tonnes, that is one hell of a figure. And like all AMGs, the acceleration never really tails off. Or certainly not at legal speeds.

The strength and flexibility of the engine is incredible - to give you an idea how relaxed it can be, and how long the gearing is, the transmission wouldn't let us select top gear at 50mph. This is where the Coupe really scores - able to waft along, but also provide continent-crushing speeds.

Yes, yes. But does it sound like an AMG?

Very much so, thanks to the unique exhaust we mentioned above. The V8 rumbles away in the distance - loud enough to be noticed, not so loud to be crude. Plus, it parps (in a nice way) on up and down shifts, so it's a much more emotional experience than the saloon. You feel like you're driving a more enthusiastic car.

Does it drive differently to the saloon?
Yes. The suspension has been lowered by 10mm and stiffened as well, but don't panic as it's still a comfortable thing on the whole. It's just that there's a fraction more rumble through the chassis than the saloon. But the trade off in handling is worth it. The Coupe corners with more poise and the body control is spot-on - the two-door isn't necessarily any quicker over a B-road, but you don't have to hustle it as much. The car feels more effortless through the corners, and the clever suspension isn't working as hard to keep it on the straight and narrow.

It feels lighter - strange, because it actually weighs 15kg more than the saloon. And Merc has got yet another technical innovation that makes the Coupe handle even better - Active Body Control (standard on rear-wheel drive AMGs). This is a system that reacts to steering input and actively ‘tips' the Coupe into a corner, like a motorbike. It's a slight tip - you won't be getting your knee down anytime soon.

Gimmick?
Not at all. The car really carves through bends so you can carry much more speed than you'd think possible. Weirdly, we found we had to alter our driving style. Normally, you'd tip an S into a corner with a certain amount of steering angle to take account of the body rolling away from the bend. But with ABC, you don't need to use as much steering input, and can wind the lock off earlier - it makes you a smoother driver. Honestly, a revelation.

Are there any weaknesses?
Just one - the gearbox. It's still Merc's seven-speed automatic and it's starting to feel dated now. It clunks occasionally, and it's too easy to wrong-foot it. Merc must be aware it's an issue, as a nine-speed auto will be dropped into the S500 Coupe later on this year.For the time being, though, the AMG continues with the seven-speeder, which is a pity.

Admittedly, it doesn't hamper the car too much, and to a certain extent we're nit-picking, but when the rest of the Coupe is so excellent, it is a let down.

Anything else I should know?
This is just one small part of an ever-expanding S-Class family. We've already had the short and long wheelbase versions, and we know there's a dictator-friendly Pullman coming, complete with armour-plating.

Speaking to Mercedes people on the launch, it's clear there's also a convertible due sometime soon. Oligarchs have never had it so good.

So should I bother?
Definitely. If you're in the market for a Bentley Continental GT, then certainly take a look at this - unlike the CL, this is now a proper rival for the Conti, and a serious statement car. Plus, it also makes sense as an AMG. Don't get us wrong - the saloon S63 is a great car, but the whole AMG-power-mated-with-coupe-driving is a much happier fit. The package makes sense as a complete entity. Quite simply, it's a master-class.