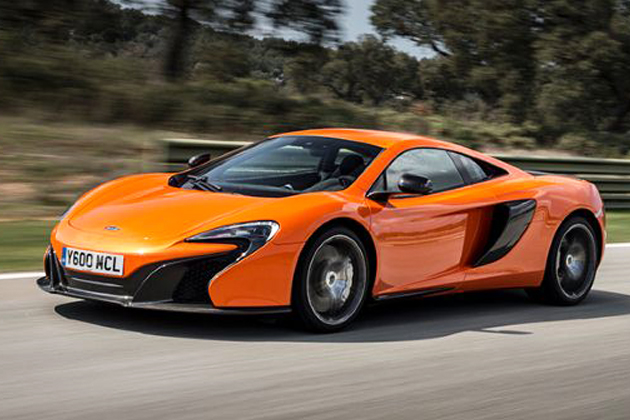 Ah, just like the race team does a fresh car every season, is this the 12C update?
McLaren would rather you didn't say that. Whilst manufacture of the 12C has been temporarily suspended (yeah right) it's still available for order. But the 650S is faster, better around a track, and feels sharper on the road. Plus it looks more like a P1. And when you take into account the improved equipment including carbon-ceramic brakes, it's similar value to the 12C.

So you're saying there's absolutely no reason to buy the 12C now?
No I'm not actually. For a start, most of us at Top Gear don't actually think the 650S looks as elegant or well-proportioned as the 12C. Oh it's more dramatic, and it generates more downforce. But all that strange black swoopy stuff at the front reeks of facelift, and especially at the back makes the car look narrower and higher. Honestly, what is there left for Mansory to add?

More than that, the springs have been stiffened. This means a slight erosion of the 12C's extraordinary ability to swallow Britain's brutal lumpen urban roads, or indeed to glide through a whole transcontinental drive, in uncanny comfort.

Well, I can disguise the two-tone styling by ordering a black one, and I can cope with the comfort loss by driving my Range Rover in town. I want a supercar that's like a supercar. Is the 650S a better supercar than the 12C?
Oh my, and how. For a start, it makes it easier to go way faster. The 12C's performance didn't need fixing, not if you remember the way it hooned in on its 8500rpm red-line, making 625bhp. But the 650S, despite having only an extra 25bhp (that is four percent) feels epically quicker - fast enough to make your head spin.

How so, if it's barely more powerful?
Because torque in the mid-ranges gets an enormous boost. It's done through proper engineering, not just chipping. The engine has new pistons, new heads, revised valve timing, bigger intercoolers and a freer exhaust. Result is a sort of easy, almost casual, nature to its brutality. Warp-drive any time you choose. But only if you ask: the delivery is progressive and free of significant lag. What an engine.

Can I have some numbers please?
It does 0-100km/h in 3.0 seconds, and 0-200km/h in 8.4s. That's not quite as quick as the new generation of hypercars, but no variant of the Ferrari 458 or even the new Lamborghini Huracan can get close.

Can the chassis cope?
Not just cope. It comes back for more. There's more grip, and even more astounding body control especially through chicanes or when you lift off in a bend to tuck the nose in. But best of all, the thing feels more organic and transparent. You don't have to be leaning into a corner at last-gasp effort for it to feel alive. It's more engaging even at real-world speeds.

And it still has the ability of the 12C to maintain its speed even when the road is lumpy, because the dampers can decouple the two sides when it needs free wheel travel, but connect them when it needs anti-roll. And finally the Track mode sharpens the damping some more and the ESP lets the car slither around a surprising amount without leaving you entirely alone.

There are standard carbon-ceramic brakes, and Pirelli P Zero Corsa tyres. Both were optional on the 12C. The carbon brakes are great - even in day-to-day road driving they're progressive and quiet. The Corsas are fine on track, but on the road, when they're not fully warmed, the car can sometimes surprise you with understeer in a tight bend. If you live in temperate climes and don't drive on track, investigate Pirelli's calmer 650S tyre option.

Any other options?
Well you can get an electric steering column now, and electric seats, if you want to ease yourself in. There's a rear-view camera and a brilliant Meridian hi-fi. Or, in the other direction, carbon race buckets. Or carbonfibre external panels, bumpers and aero parts, which shave off another few kilos, but would expose you to catastrophic levels of supermarket-car-park anxiety. Then you have the choice of Coupe or Spider.

Any guidance on the Coupe-v-Spider thing?
The whole car, in either body style, gets its extraordinary rigidity and handling precision from the rigid carbonfibre lower tub. You really don't notice it being dulled when you switch from coupe to open spider, as I did at the launch event.

Anyway, the Spider has a hard roof so is as protective as the coupe when the roof is up in place, and it looks almost as good, and has almost as much storage space. Roof down, there's a whole new level of sensation and noise and drama. Eight out of 10 McLaren-owning cats prefer the Spider. And I agree.