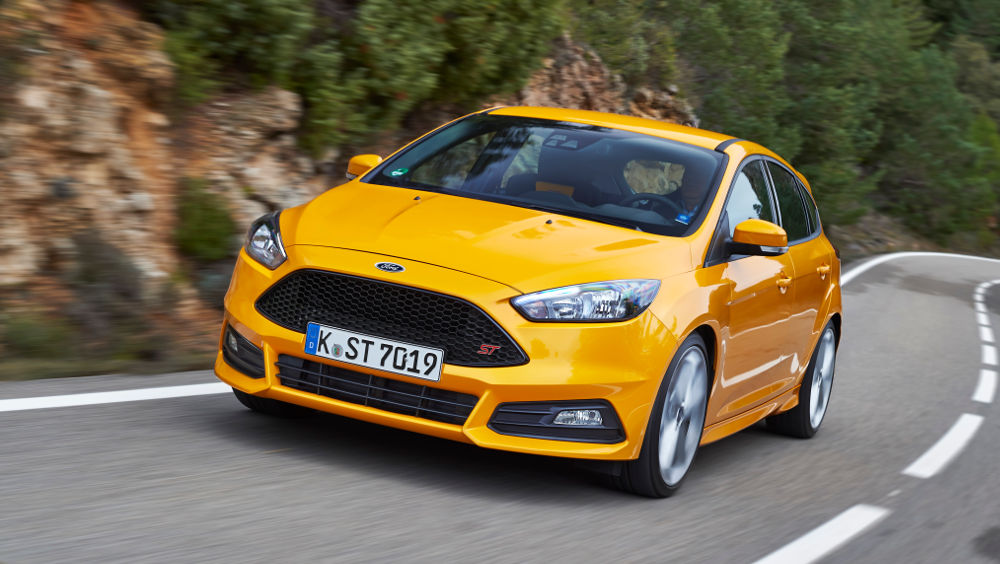 What's new with the ST, then?

Ford's hottest Focus (for now...) joins the rest of the hatchback line-up in getting a jolly good spruce-up. It's no mere dusting of new headlights and a sharpened grille - though these two tried-and-tested modifications do give it an uncanny resemblance to the dinkier Fiesta ST - rather a more thorough fine-tuning of its whole character.

What are the headlines?

Big news comes in the form of a new engine. The 247bhp 2-litre petrol turbo unit continues service, albeit with some mild software tweaks, but sitting alongside it is now a 182bhp 2-litre turbodiesel option. And no, it's not called the STD. Both drive the front wheels rather frenetically through a six-speed manual gearbox.

Elsewhere, the chassis has had some attention, with stiffened suspension, while both the torque vectoring system and the electric power steering have received a retune. Detail evolutions rather than revolutions, but the end result is a car that feels much sharper than before.

It's good to drive then?

Oh yes. It was pretty good in the first place, twinning keen, agile dynamics with a firm yet compliant ride. There's more of the same here: the steering feels more focused, with satisfying levels of weight for an electronic system, endowing it with an intuitiveness that should rarely see you having to adjust how much lock you've applied.

The ride, meanwhile, feels a tad firmer than before, but purposefully so. Given how well maintained our Spanish test roads appeared to be, however, full judgement is reserved for when we try the ST on the UK's more pock-marked tarmac.

Shorn of a proper differential, the front axle can feel overwhelmed by the ST's torque out of corners, though the solution might sound counterintuitive. Turn the ESP into its slacker Sport mode and the traction control's tight grasp is loosened, allowing the tyres to dig in nicely.

While accomplished rivals from VW, Renault and Seat prove the benefits of a diff, the Ford compensates with an electronic torque vectoring system that feels hugely effective. We encountered some extremely soggy conditions, yet full faith could be put in the front end, goading us into going faster and faster every corner. Just like a good hot hatch should, then.

The petrol is just as before: extremely flexible in its power delivery yet grateful for a good revving, too, allowing you to stir the snickety gearchange as much or as little as you like.

Really extend the engine out and this is a blooming fast little car, swifter perhaps than its 6.5sec 0-62mph time suggests. The artificially enhanced engine noise doesn't even offend, burbling especially entertainingly at the rev counter's upper reaches.

The diesel, meanwhile, is less appealing in soundtrack. It too gets some artificial assistance, but it can't disguise an agricultural undercurrent that is especially present at low speeds. Naturally, it's more admirable for its claimed figures; 110g/km and 67.3mpg (versus 159g/km and 41.5mpg for the petrol) make it much the more plausible company car choice.

While the oil-burning engine comes with a 27kg weight premium, there's no perceptible effect on its keenness to turn, while throttle response is pleasingly crisp for a diesel, allowing for some satisfying rev matching.

But that phrase - "for a diesel" - is hard to avoid when dishing praise out to the ST TDCI. It's notably the less stimulating of the two cars, its 0-62mph time pegged at 8.1sec and as the powerband wanes just north of 4000rpm, so might your excitement. Starting at £22,195, there's no difference in price between the two, but unless your car choice is dictated by economy figures, we'd stay petrol.

Anything else of note?

As before, there's a choice of both five-door hatchback and estate models, the latter commanding a £1,100 premium. Weighing just 24kg more, and with an identical wheelbase to its smaller sibling, any handling differences are difficult to spot. It's arguably the smarter looking car of the pair, too, especially if you go for stealth-spec solid grey paint.

While the Focus ST's £22k entry point undercuts a 30bhp-lighter Golf GTI by around four grand, only two per cent of UK buyers actually plump for basic spec. Far more popular are its better-equipped ST2 and ST3 trims, and the latter - which starts at £25,995 - is where you'll find Ford's smart new Sync touchscreen media system as standard. It mops up the old button-festooned dashboard and gives the Focus a far more premium feel than before.

You want more stats? Ford expects petrol and diesel sales to be split 50/50 in the ST range, while the newly frugal engine option should boost the current 15 per cent take-up of estates. And less than ten per cent of people dare go for the 'Tangerine Scream' paint you see above...

I hear there's an RS coming?

Ford's unveiling of its startling new GT supercar trumpeted the arrival of Ford Performance, a new name for the umbrella that all of its sporty activities fall under.

Ford Performance is split into three categories, dubbed 'ultra-high performance', 'high performance' and 'enhanced technology'. With the ST being pigeonholed in the latter, there's room for a 300bhp-plus RS above it, something we'll get our first glimpse of very soon. The ST is likened to a pentathlete for its do-it-all capabilities, while the RS will be altogether more focussed, with track use firmly in mind.

A Fiesta RS, too? No confirmation yet, but performance targets have been set, the hardware required to meet them identified, the small matter of justifying its business case remaining. Ford is intolerant of loss-leading performance cars that build the brand, so its performance cars need to make cash as well as titillate us petrolheads. Cross your fingers while petitioning to your dealer, then.