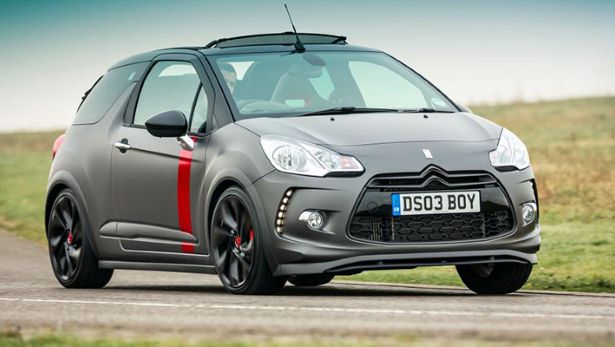 Yay! So I can buy a DS3 Racing again!

Yep. When the DS3R launched back in 2011, Citroen promptly sold out. So everyone bought Renault Clio Cup 200s and Fiesta STs then forgot all about it.

Afraid so. It costs as much as a M135i and Golf GTI, both proper, grown-up hot hatches.

Blimey. Is this as resolved as those two?

Actually, it is. While there’s less metal than the VW or BMW, this is a really refined little thing.

But it looks a bit… loud.

You’ll have to look beyond that stuff. Unfortunately, it only comes in matte grey paint, and it’s scored with a big red stripe. Then there’s the gloss black 18-inch alloys and grille, and tiny carbon splitter. Inside, it’s also a bit idiotic. There are a set of leather racing seats lifted directly from the set of Logan’s Run, and a carbon fibre dashboard.

Wait, so how’s this grown up again?

It’s the drive. The four-cylinder 1.6-litre engine, which is what BMW used in the Mini until recently, keeps all of the old DS3R’s mods, including a remapped ECU, uprated turbocharger, and sports exhaust system. The changes hoik power up by 30 per cent compared with a normal 1.6-litre DS3, and it matches the hot tin roofed model’s 0-100km/h time of 6.5 seconds.

But it’s the delivery that’s important here. Unlike a more focused hot hatch (see Fiesta ST, or anything with RenaultSport on the back), it’s not a fizzy, frantic thing. Once you’ve gone past the first few thousand rpm, which are softened very slightly by turbo lag, it puts on speed in great gusts – more mid-range and GT-like than you’d expect a little Citroen with a fabric ceiling could ever be.

And what about round corners?

Same deal. The Citroen bods that built Seb Loeb’s rally machines lightly tweaked the chassis, but you can’t help but think they’ve been told to go easy. There are big Brembo brakes, it’s a manageable 15mm lower on stiffer springs, the track’s been widened by 30mm, the 18-inch wheels have sticky tyres, and the steering’s been made more feelsome. Which means it won’t raise your blood pressure when you’re pottering around town, but there’s a crispness to it when you prod it a bit. And the scalping hasn’t added any baggyness to its cornering ability – it feels as tight and true as the old one.

I see. But that’s still a lot of money…

Yes, it really is. OK, so it’s exclusive, one of few things that’ll headbutt you into soft-top hot hatchery, and it’s genuinely superb to drive. But it’s just not as good as the other fast, smaller cars out there. Which, we imagine, is why they’re only building 100.

"The Citroen bods that built Seb Loeb’s rally machines lightly tweaked the chassis, but you can’t help but think they’ve been told to go easy."