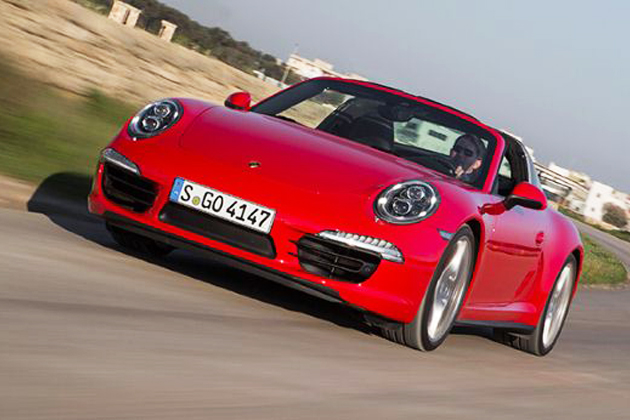 Hang on. Doesn't Porsche already make a convertible 911?
It does indeed, the fully-open Cabriolet, but this is the ‘half-open' (Porsche's words, not ours) Targa, a model that actually precedes the cabrio in 911 chronology by 15 years.

What's the point of that back bit?
Porsche developed the original 1967 Targa for the US market, which was threatening to ban full convertibles outright due to safety concerns. Zuffenhausen built the rollover hoop and folding rear screens to counter such crazy laws, and this engineering side-stepping gave the Targa its distinctive appearance.

But America never actually banned cabrios, right?
Right, but the Targa quickly acquired a cult following nonetheless so Porsche kept it going. And it has been soldiering on ever since, even after the Cabriolet muscled in on the act in 1982.

I don't remember the previous 911 Targa having this roof set-up.
In 1996 - during the 993 generation of 911 - Porsche changed the Targa to make it look more like the coupé, and through 996 and 997 variants it has been nothing more than a car with a fancy sliding sunroof, much to the chagrin of avid Targa fans.

So what does this new one offer?
A shedload of style, that's what. The Targa looks stunning, the modern rendering of the hoop and wraparound rear glass working brilliantly. It has much more class than the Cabriolet, simply by being daring enough to stand out from the flat-shouldered convertible norm.

It also offers a drive that's nigh-on indistinguishable from its hard-top coupé siblings. This is good. The Targa only comes in four-wheel drive format, and there are two engine and transmission options - the 3.4-litre, 345bhp standard model and the punchier 3.8-litre, 395bhp Targa 4S. Go for a 4S fitted with the PDK transmission, as it suits the car's laid-back, sunshine-seeking attitude better.

There's more weight up top, as the Targa is 40kg heavier than the equivalent Cabriolet due to the glass rear screen, but it's not enough to ruin the 991's excellent chassis. The steering's a bit uncommunicative, though.

And how much does it cost?
Ah. You might expect the Targa to undercut the fully-open Cabriolet by quite some margin, but it doesn't. Both Targa variants are less than a grand cheaper than their equivalent Cab models; a T4 starts at S$541,288, the T4S a princely S$608,588. And you can't raise or lower its fancy folding roof on the move either. The rear screen would act as an airbrake and there'd be all kinds of aerodynamics-related shenanigans that would damage the hood's complex structure.

Is it worth the money?
We think so. The Targa exudes an air of élan that very few other convertibles do and, when all's said and done, it is a 911, so it drives fabulously too. We like. A lot.