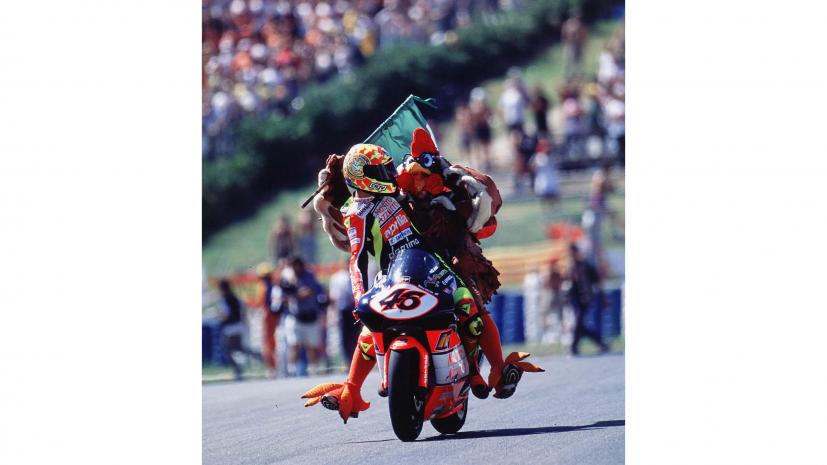 Motorsport is so full of sponsorship these days,’ you might fairly bemoan. ‘No sooner has a driver finished a race and they have to slap on a cap full of adverts.’ Well, Valentino Rossi had the antidote years ago. Already famous for his sense of humour having dressed up as Robin Hood during celebrations in his 125cc title win season a year earlier, Vale then concocted fake sponsor – Osvaldo Chickens – throwing Italian press into disarray. The punchline of Vale’s early career spoof was a full-size Osvaldo joining him for a pillion lap of Catalunya after Rossi’s second 250cc race win. 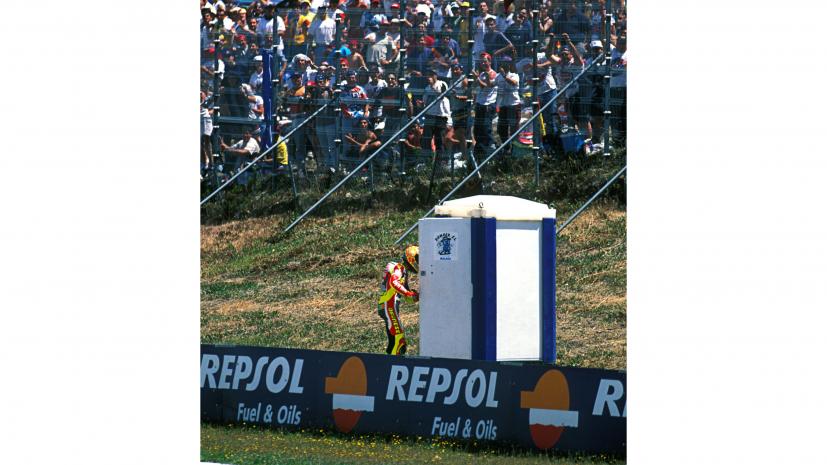 If you’re anything like us, you’ll frequently wonder what our motorsport heroes do when they need a pee mid-race. Well, in 1999 a young Italian 250cc rider called ‘Valentino’ answered the question in less than glamorous style: you hold your excess liquid in all race then nip into one of the race marshal's portaloos once the chequered flag falls, holding up the podium you’re due to stand atop having won the race. Quite the achievement. 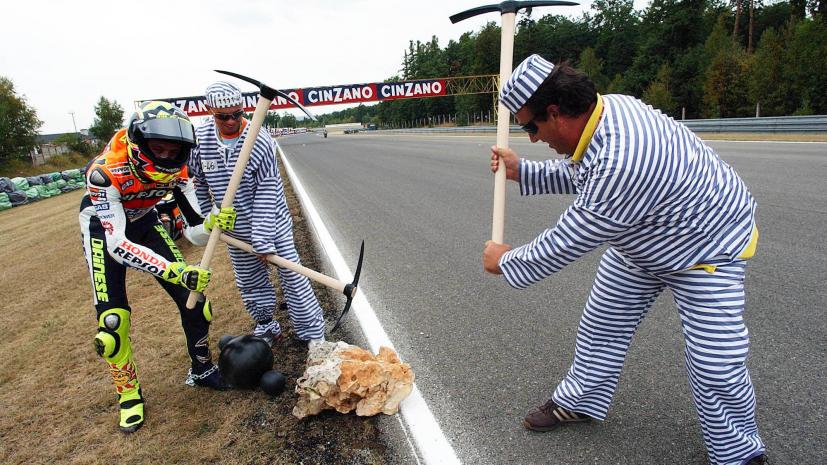 If Osvaldo the chicken taught us anything, it’s that Rossi had the press in the palm of his hand. So his reaction to the more fickle side of sports reporting, the one that jumps straight into criticism when a winning run falters? To portray himself as ‘the condemned man’ after victory at Brno in 2003. How long the costumes and props had been prepared we don’t know, but this came off the back of four races where Vale had to slum it on the second or third step of the podium. Either way, he won five of the six races that followed to take his third world title on the trot. 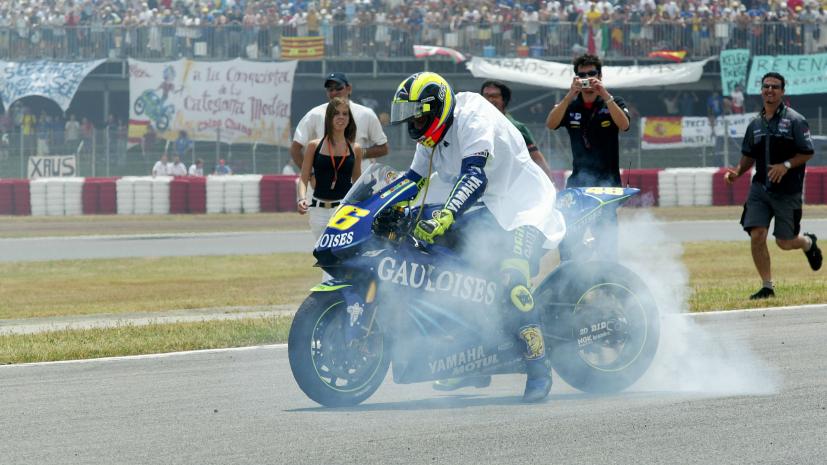 Vale, VR46, GOAT… here's a boy not short of nicknames. Perhaps most iconic – and most commonly transferred to mugs, t-shirts and bumper stickers – is The Doctor. Theories of its origin very wildly, some as prosaic as ‘quite a lot of doctors have the surname Rossi in Italy’, but Rossi’s ability to make any bike work beneath him – to fix its quirks – is somewhat neater. Either way, said Doctor fully indulged the legend with his doctor's cloak and stethoscope after victory at Catalunya, his third win with new team Yamaha in 2004. A bike he’d clearly made work nicely after naysayers questioned his move from Honda after three championships there. 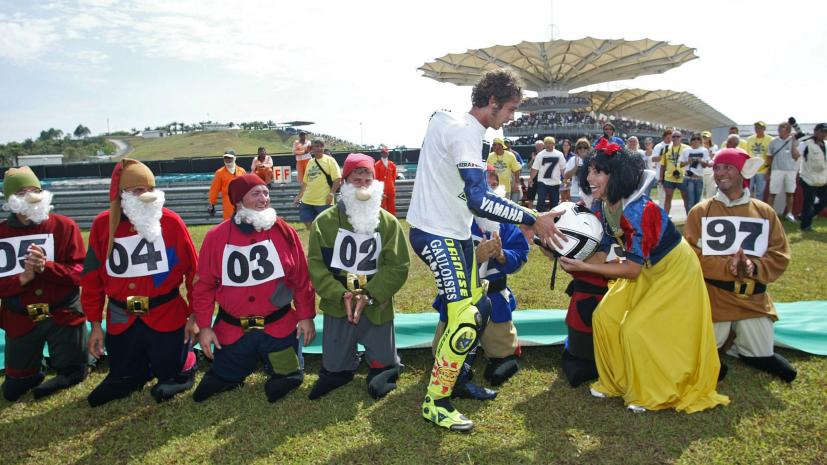 Rossi had to make do with second place at Sepang in 2005, making this our first celebration not associated with victory. It was a sweet, sweet second place, though; one that had secured Vale his fifth MotoGP world title, and his seventh world title when you include those early 125cc and 250cc honours. Back to the fancy dress box, then, to mark seven titles with Snow White and the Seven Dwarves – and eight very excitable members of the Valentino Rossi fan club surely having the best day of their lives. 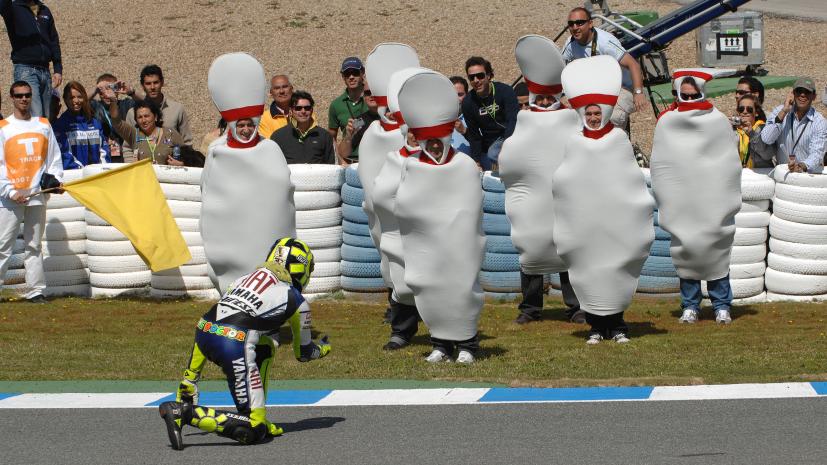 More fans in fancy dress, this time as bowling pins which Vale bowled over – one teetering side to side like a Weeble before falling, just to drag out the spectacle. There was no abundantly clear reason for this one, though perhaps – after five winless races and following his first season without a title since the year 2000 – it was a visual metaphor that Vale could still strike down his opponents. Or bowl them over. Either way, we’re still talking about it 14 years later… 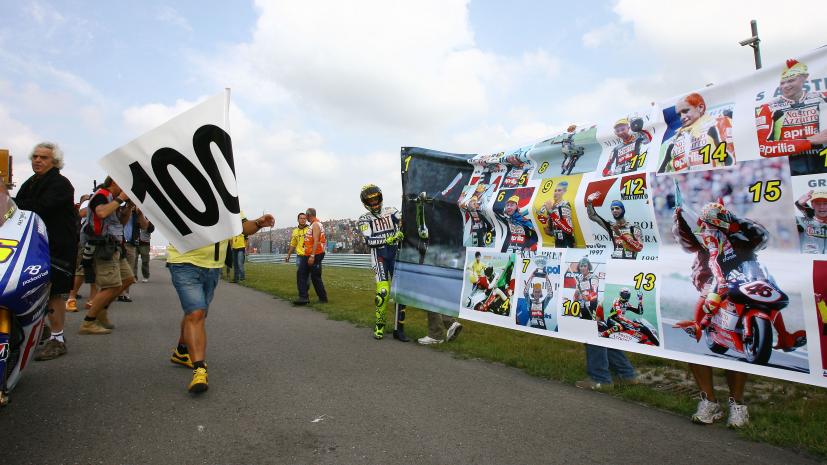 Clearly Valentino Rossi is not shy. And, so willing to reference his own riding genius in a number of well-choreographed celebrations, nor especially modest. So it was probably little surprise to see The Doctor roll out a vast scroll illustrating every Grand Prix win of his career as he hit victory number one hundred at Assen. One can only imagine the bill he racked up at Prontaprint with that order. 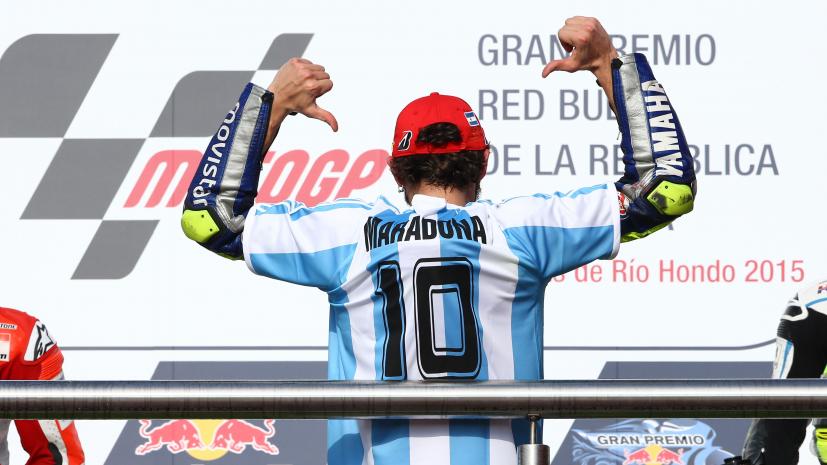 Rossi can be humble too. And deeply, deeply classy. If a major bike racing name passed away in the days before a VR46 victory, he’d wear their name on the podium. As Rossi’s latent talent saw him surpass the sport’s greats – such as Mike Hailwood – there’d be an appropriately judged flag or banner to acknowledge their genius. So when Rossi first won in Argentina, he immediately recognised Diego Maradona – a player he’d idolised in a Napoli shirt as a boy. Vale had brought the shirt with him to the 2014 Argentine GP but missed out on a podium spot… 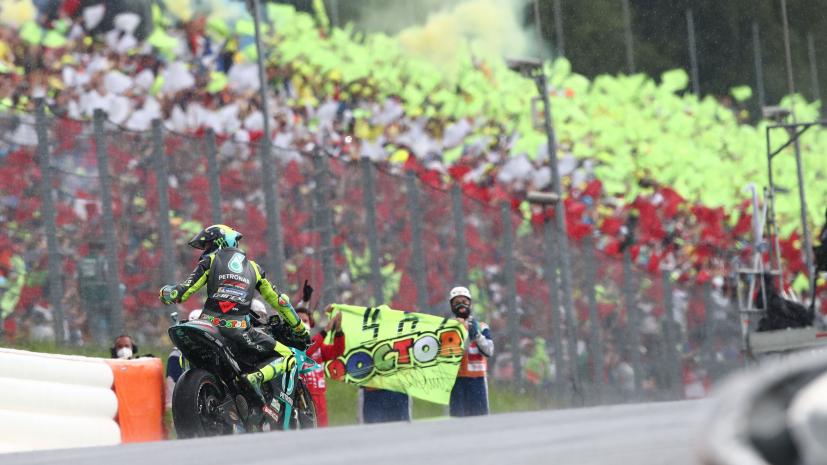 Barely had anything ever mattered less, for it was in the pre-race build up when The Doctor called the press conference we’d all been dreading – this would be his final season as a motorbike racer. No need for costumes or planned theatrics when the man who is MotoGP has announced he’ll soon be vacating the paddock, and the watching, adoring tifosi are lapping up every second they see him buzz pass.