At 3pm on 8 May 1945, following Germany’s formal surrender the day before, Winston Churchill made an announcement over the airwaves that World War Two had come to an end in Europe. Today is the 75th anniversary of that monumental day: VE Day. Or, to fill out the military’s love of acronyms, Victory in Europe Day.

Let’s just make something clear from the outset, Top Gear’s not normally the place for regaling tales of war, and we’re not here to give you a Ken Burns documentary of the ins and outs of WW2 (there’s plenty of better placed beardy types for that), but given it is VE Day, there’s a little-known story we’d like to tell. The story of an often-forgotten two-stroke motorbike; one that was hurled out of planes with paratroopers to play a vital part in defeating the Nazis. It’s the story of Royal Enfield’s ‘Flying Flea’. Now, if you’re one of the 60 million playing Call of Duty: Warzone during lockdown, you’ll be familiar with the role of a paratrooper. If you’re not, the concept is simple: they’re the airborne force – the soldiers with parachutes on their back that jump out of planes into battle. Back in WW2 though, throwing military personnel out of an aircraft was a novel, pioneering concept.

At the outbreak of war in 1939, Britain had no airborne forces. None. Impressed by Germany’s Fallschirmjäger, Churchill ordered the formation of a 5,000-strong parachute and glider-borne corps in June 1940. Now, as you digital war heroes will know, once you land on the ground it’s quite tiresome to get around – especially if you’re lugging a load of kit and weaponry with you. What these newfangled flying soldiers needed was transport to be thrown out the plane with them. So that’s what happened.

Initially, folding bicycles were seen as the solution. But soldiers didn’t really like the idea of jumping out of a plane with the equivalent of a Boris Bike strapped to their chest.

And due to this thing called ‘gravity’, lobbing a bike out of a moving plane to then land on a hard surface would, more often than not, leave them looking like crushed Coke cans. Even if they did survive (the bikes, that is) they were cumbersome, slow and utterly rubbish to get around on if you landed in the wrong, boggy field. Which happened.

An obvious solution was the bicycle’s natural evolved state: a motorcycle. However, typical military despatch riders’ bikes at the time were too heavy. So, in early 1942 the campaign for a lighter, more versatile bike began. 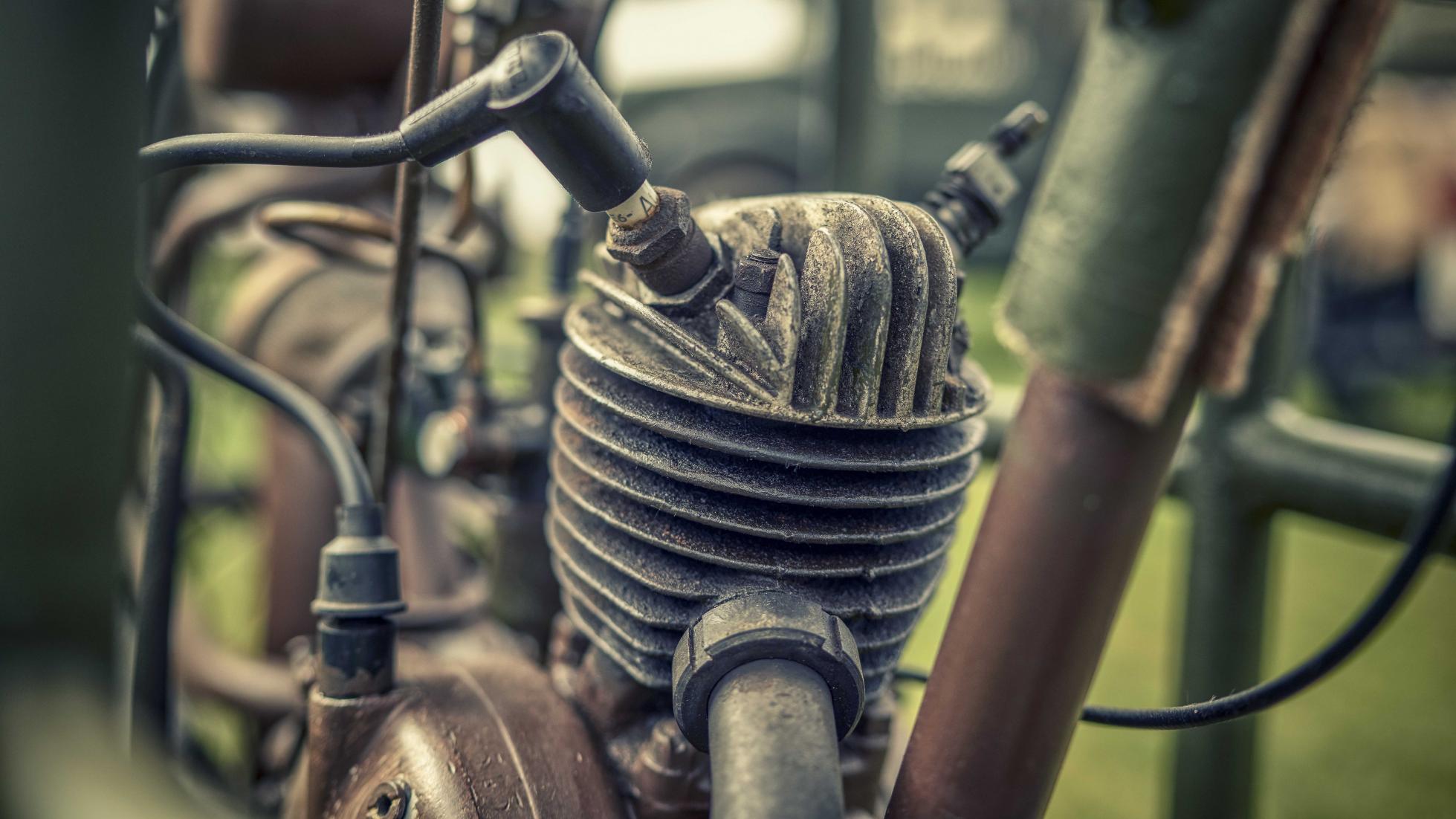 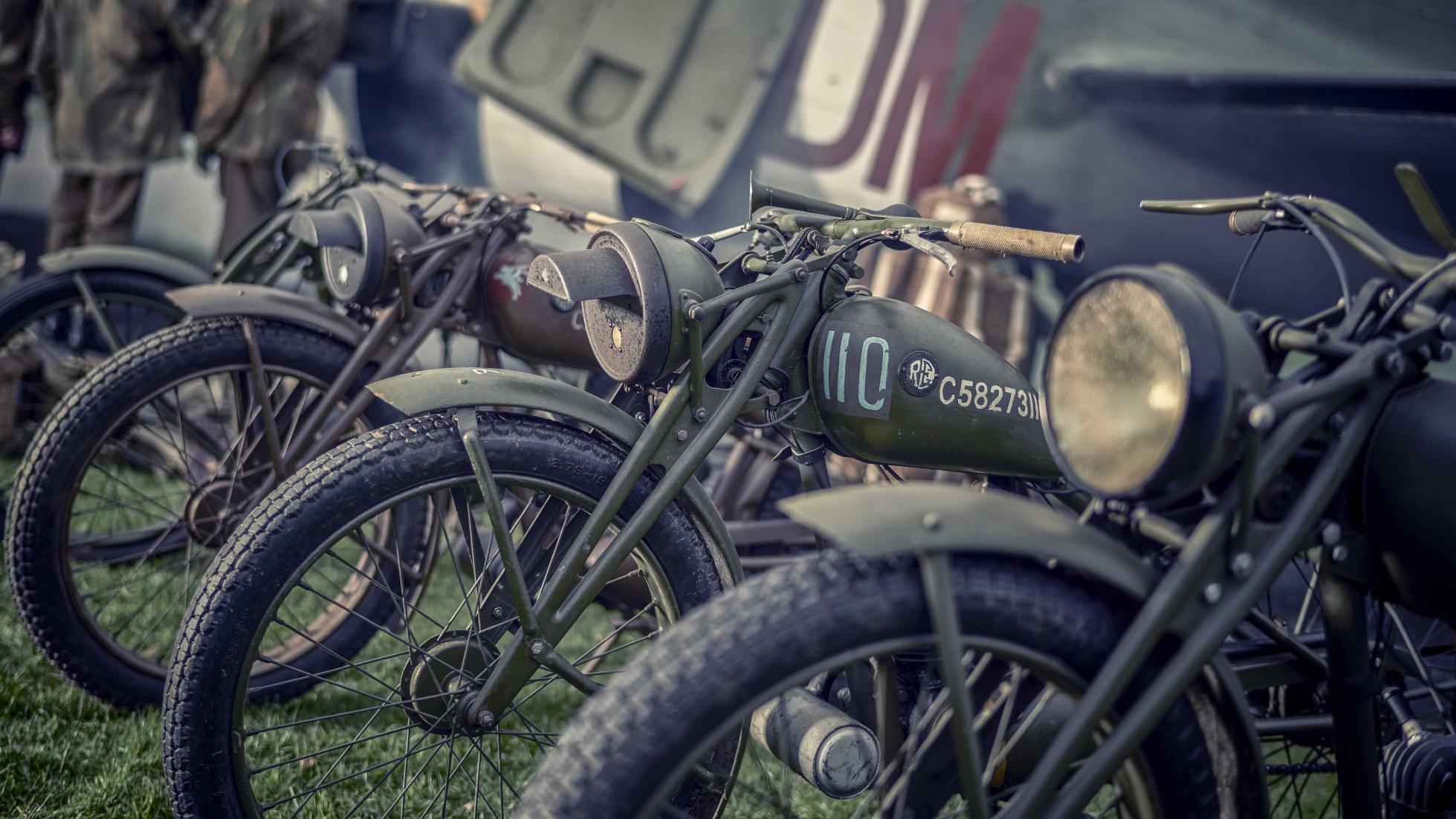 The effort was largely led by Arthur Bourne, editor of The Motor Cycle (Britain’s top-selling weekly motorbike magazine at the time) and a crucial lynchpin in getting paratroopers moving. In a remarkable case of foresight (and in response to the growing Nazi threat), he’d been rattling the military’s cage since the mid-1930s, stating that a light motorbike for battle was a Good Thing. Back then, he tried to get them to buy a load of RT100s, a 97.5cc two-stroke made by German manufacturer DKW. But the War Department civil servants crossed their arms, shook their heads and said no.

Fast forward a few years and that all changed when things got particularly fighty across the Channel. By now, the need for paratroopers to have a bike was very real. So Arthur Bourne got on the blower to his mate – Royal Enfield boss Major Frank Smith – and went back to the Army-types with a new idea. See, in the time period that the War Department went from completely disregarding motorbikes to really needing them, British bike manufacturer Royal Enfield had started reverse-engineering the DKW bike in order to produce a similar machine, the Model RE. However, it had one crucial upgrade: a bigger, more battlefield applicable 126cc engine. 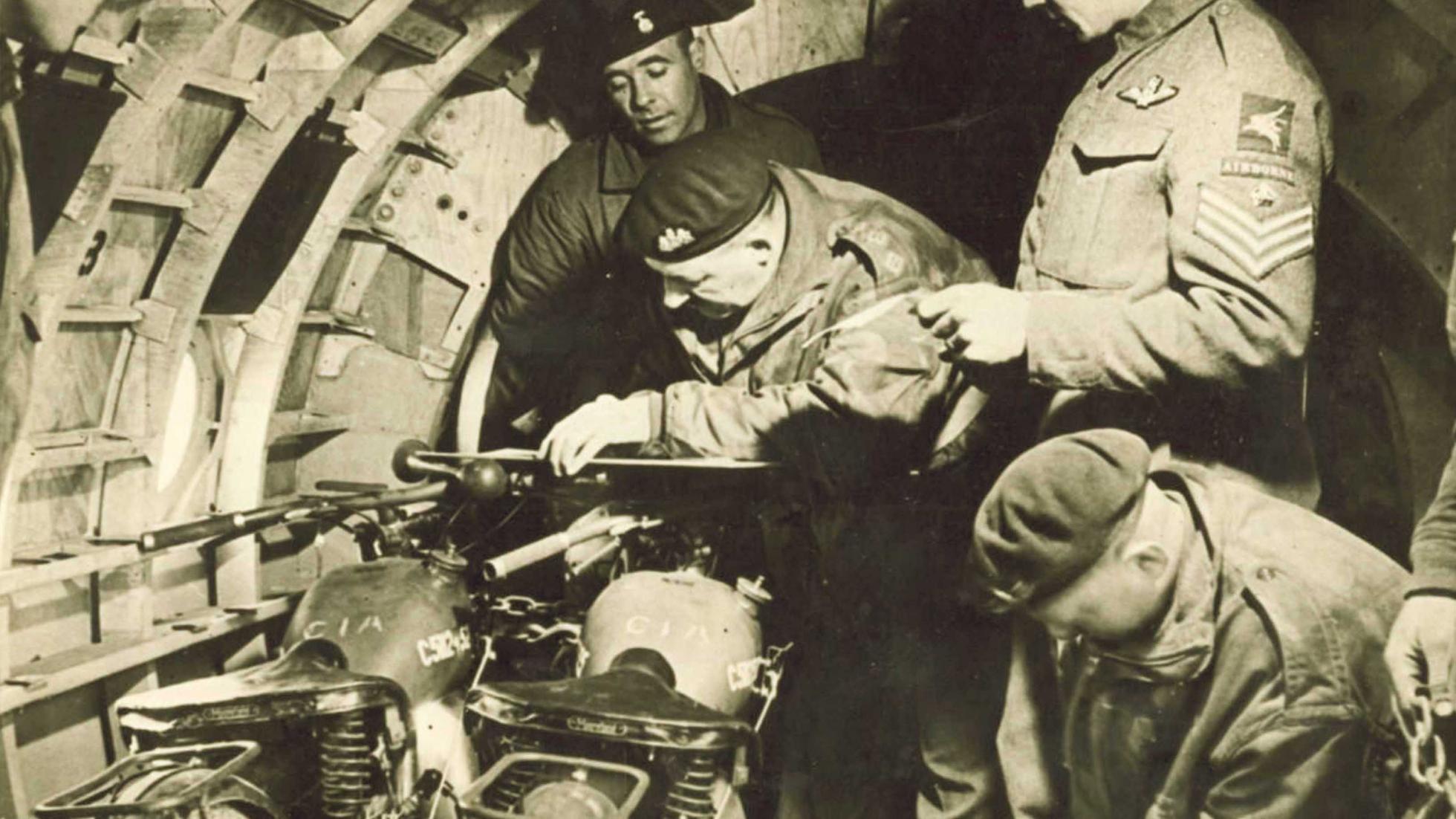 Being a weedy thing, when Arthur showed the bike to the Army bosses they laughed their heads off thinking it was a joke. They stopped laughing when someone handy started to ride it. Enter Arthur Bourne. With years of trials experience, he skipped the little RE across logs, bomb craters and generally bounced it around like a deer who’d drunk too much Robinsons Fruit Shoot. Impressed, the Army top brass had a go themselves. One of those was Major General Frederick Browning – the man responsible for providing the new airborne force with special equipment. Being a two-wheel enthusiast himself he declared, “We must have these”.

The War Department ended up placing an order for 4,000 RE models. But that name didn’t stick around for long. Because of the bike’s lithe dimensions, the fact it only weighed 56kg, plus the fact it could be dropped from aircraft, it quickly got brandished with the nickname the ‘Flying Flea’.

As bikes go, the Flea was as basic as they come. In fact, compared with the current age of traction control, yaw control, wheelie control and heated grips, it’s practically prehistoric. But that didn’t mean they were bad. First off, they were proper featherweights. Only weighing the same as a mid-sized kangaroo, squaddies could easily lob them over a wall, carry them across a river and easily traverse difficult terrain by simply keeping the throttle pinned. We know what you’re thinking, “that titchy air-cooled two-stroke couldn’t pull the skin off a rice pudding!” Well, it had enough poke and range from the one-and-a-half gallon fuel tank for around 150 miles (about 240km) at about 35-40mph (56-65kph). That’s efficiency.

Gears were dictated by a three-speed, hand gearchange and, with a very low compression piston, its diddy 126cc engine could run on the cruddiest quality war fuel. Trust us, you don’t want to be looking for 98 octane when you’ve got to get out of the way of live ammunition. The suspension was also rather rudimentary, consisting of three strong rubber bands. It was a simple, cheap – if not bouncy – solution. But most importantly, it worked. Especially having fallen from the sky. On that point, tubular steel cradles were drop tested by the army and built by Royal Enfield to act as a protective shield so they didn’t turn to sparkly dust on impact. Other changes were also made to the bike to make it more war-ready; handlebars were rotated to fit within the cradle, the kick starter and footrests were replaced with folding ones to make it even more compact, and the seat height was raised and an expansion chamber added to muffle the exhaust for stealth behind enemy lines. A quiet exhaust? That wouldn’t fly with YouTubers nowadays. Luckily, the paint job would. The first Fleas were painted Standard Camouflage Number Two, or ‘Fresh Dogsh*t Brown’ in unofficial British army speak. Later ones were painted in Olive Drab, or Camouflage Colour Number 15.

“The Flying Flea was a phenomenal piece of equipment developed in very short time and adapted for airborne use,” said Airborne Museum curator Jon Baker. “It’s a good example of industry stepping up to the plate in wartime conditions.”

With the boots of the freshly assembled maroon-bereted Parachute Regiment polished, and the Royal Enfields built, in 1940 both bike and rider were ready for battle. Many Flying Fleas were dropped out of American Douglas C-47 Dakotas ahead of the D-Day landings and Operation Market Garden, the largest airborne operation in history which culminated in the Battle of Arnhem. Once on the ground and unpacked from their crates, the Fleas were used for all manner of jobs: establishing communications between airborne units that were scattered all over the place (remember, parachutes back then were directionless – effectively giant duvet sheets above their head), reconnaissance, troop transport and rescue. Not all were parachuted in though, many were transported inside Horsa gliders and some carried ashore from Royal Navy landing craft, especially during D-Day. The first division to land – the 3rd Infantry Division – was equipped with 600 Flying Fleas to help co-ordinate the beach landings. Imagine the sight as Allied forces fought to establish a beachhead, then hundreds of Flying Fleas zinged-up their two strokes and charged from landing craft. “The ramp would touch down and out would come the bikes,” explained Royal Enfield historian Gordon May. Once on the sand, the motorcycle-mounted ‘beachmasters’ would wrangle troops like a sheepdog, then help to push forward while slaloming through heavily mined, obstacle-strewn terrain under constant enemy fire. Elsewhere in the war – like during Operation Market Garden where paras’ drop zone was eight miles from Arnhem – the Fleas were critical to getting men to the action. It’s well documented that artillery units made extensive use of Jeeps, but for infantry battalions on the ground, it was the Flying Flea that enabled a large body of men to be able to advance rapidly and engage the enemy. Just like Jeeps, tanks and aircraft, the Flying Flea was a combat vehicle… a lifeline.

Being used and abused in battle, only a handful of original military Flying Fleas have survived. Like lots of military hardware from the period, they were seen as disposable and sent across the Channel on a one-way ticket. But the part they played in scooting those incredibly brave soldiers and servicemen around can’t be underestimated and shouldn’t be forgotten. So join us as we salute that incredible little motorbike, the Royal Enfield Flying Flea. 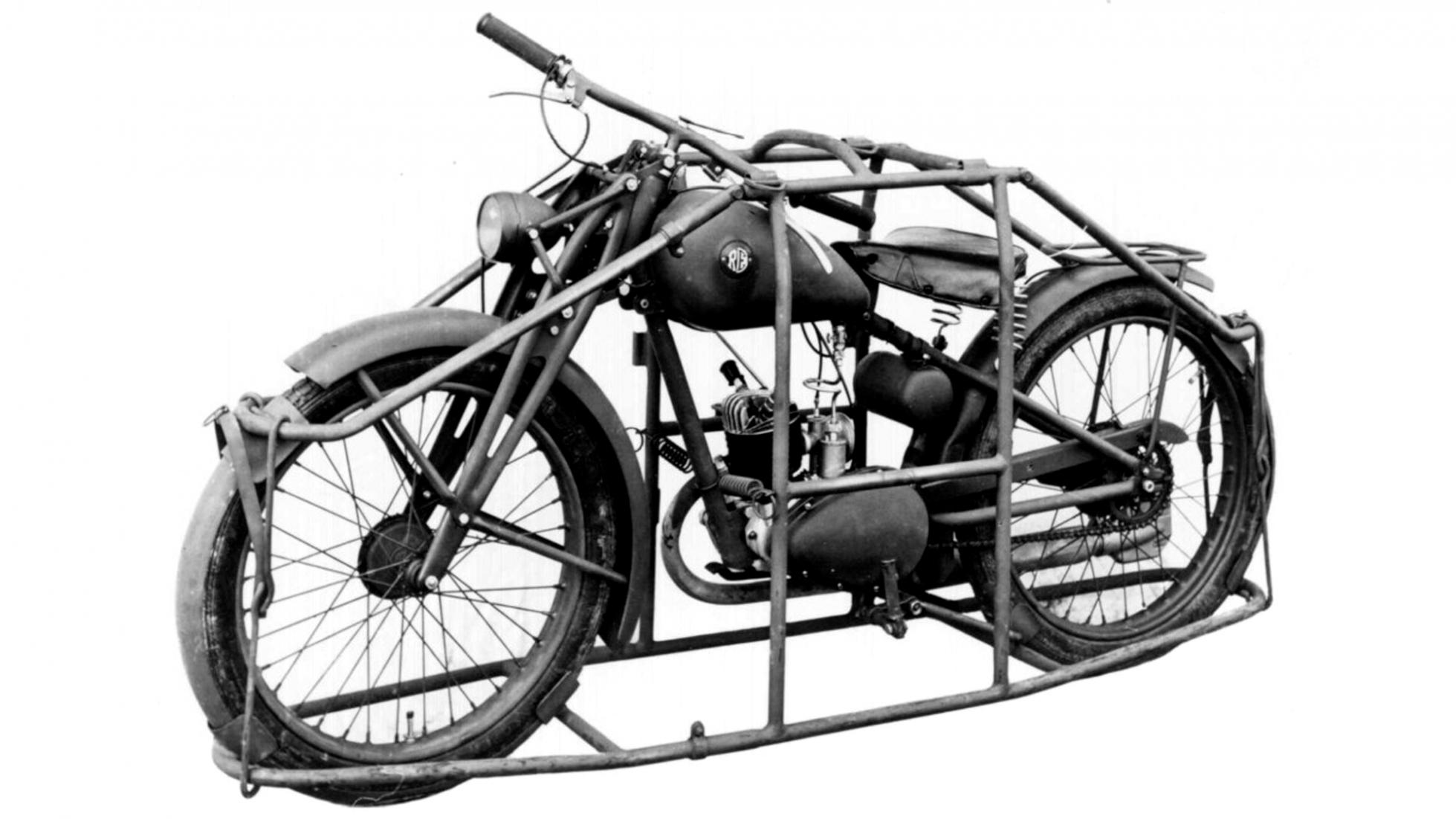 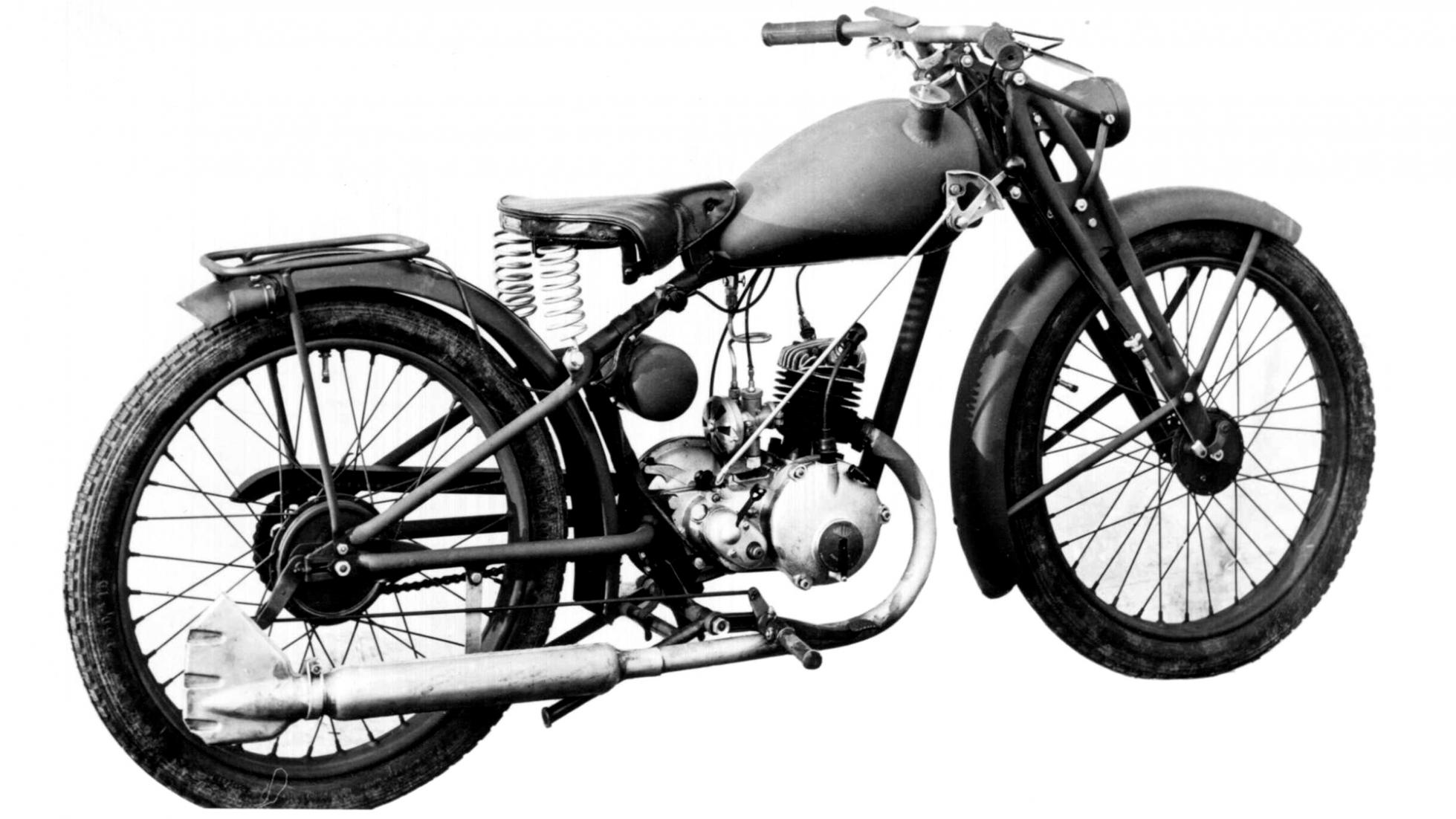 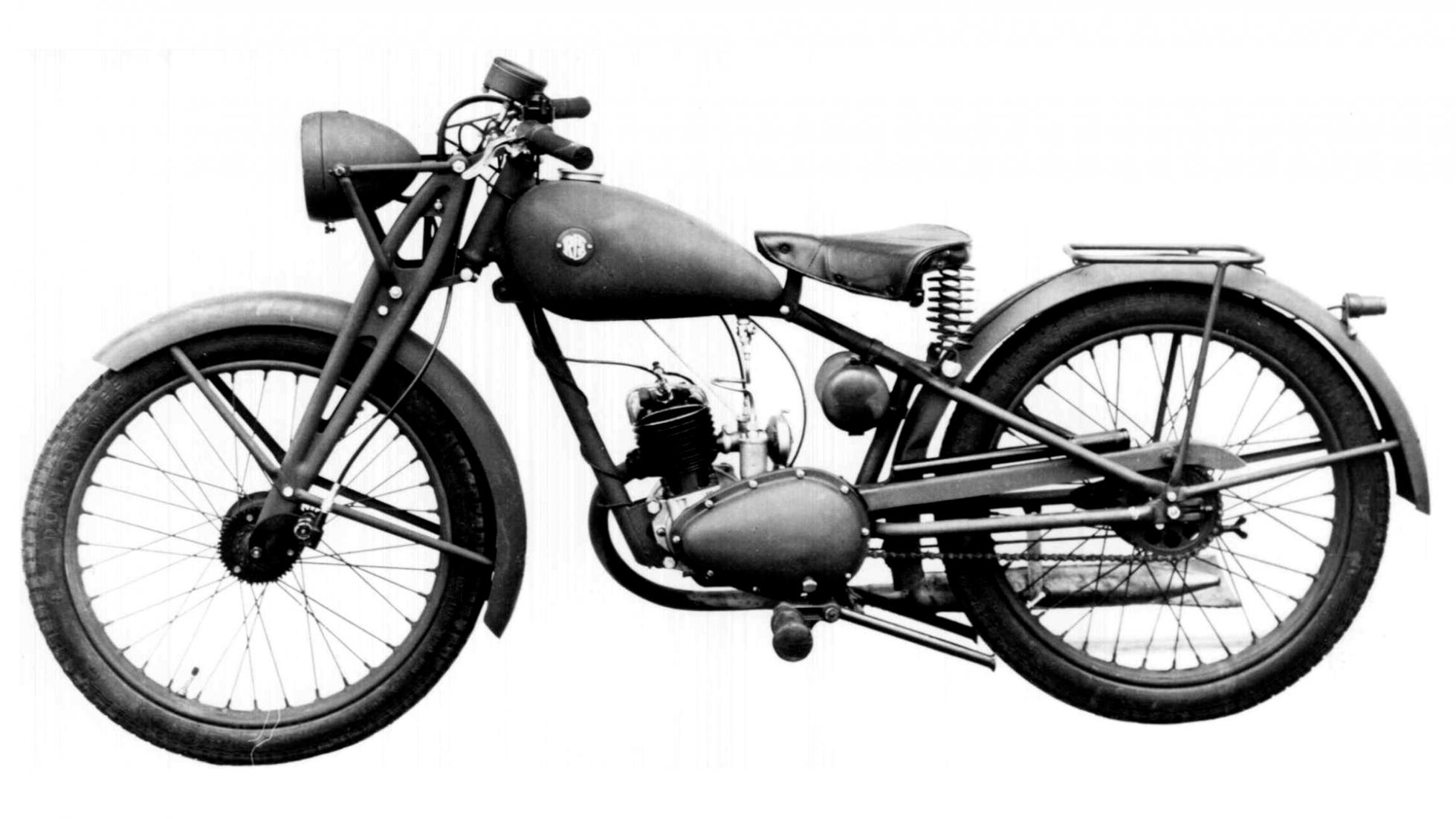 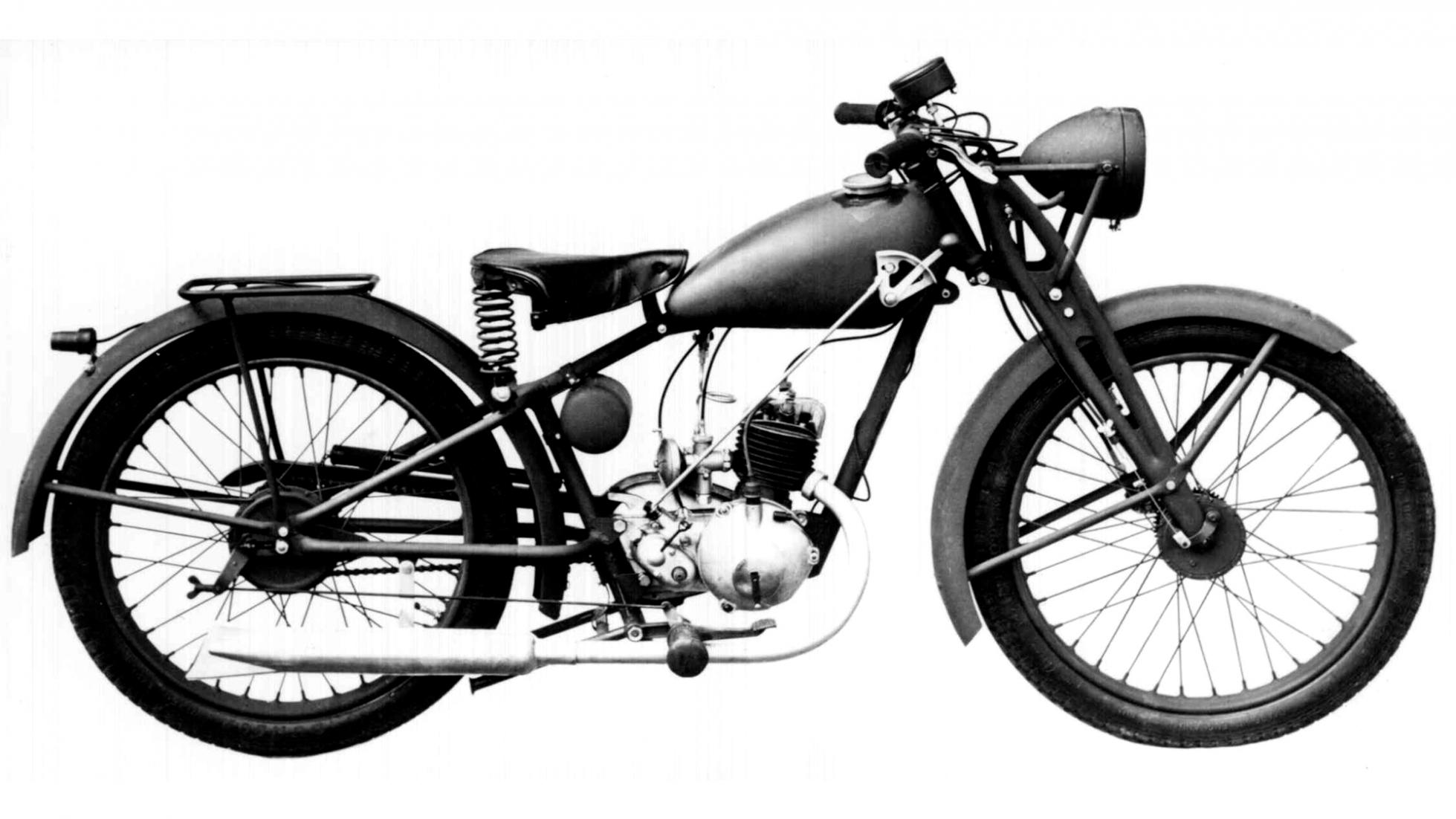 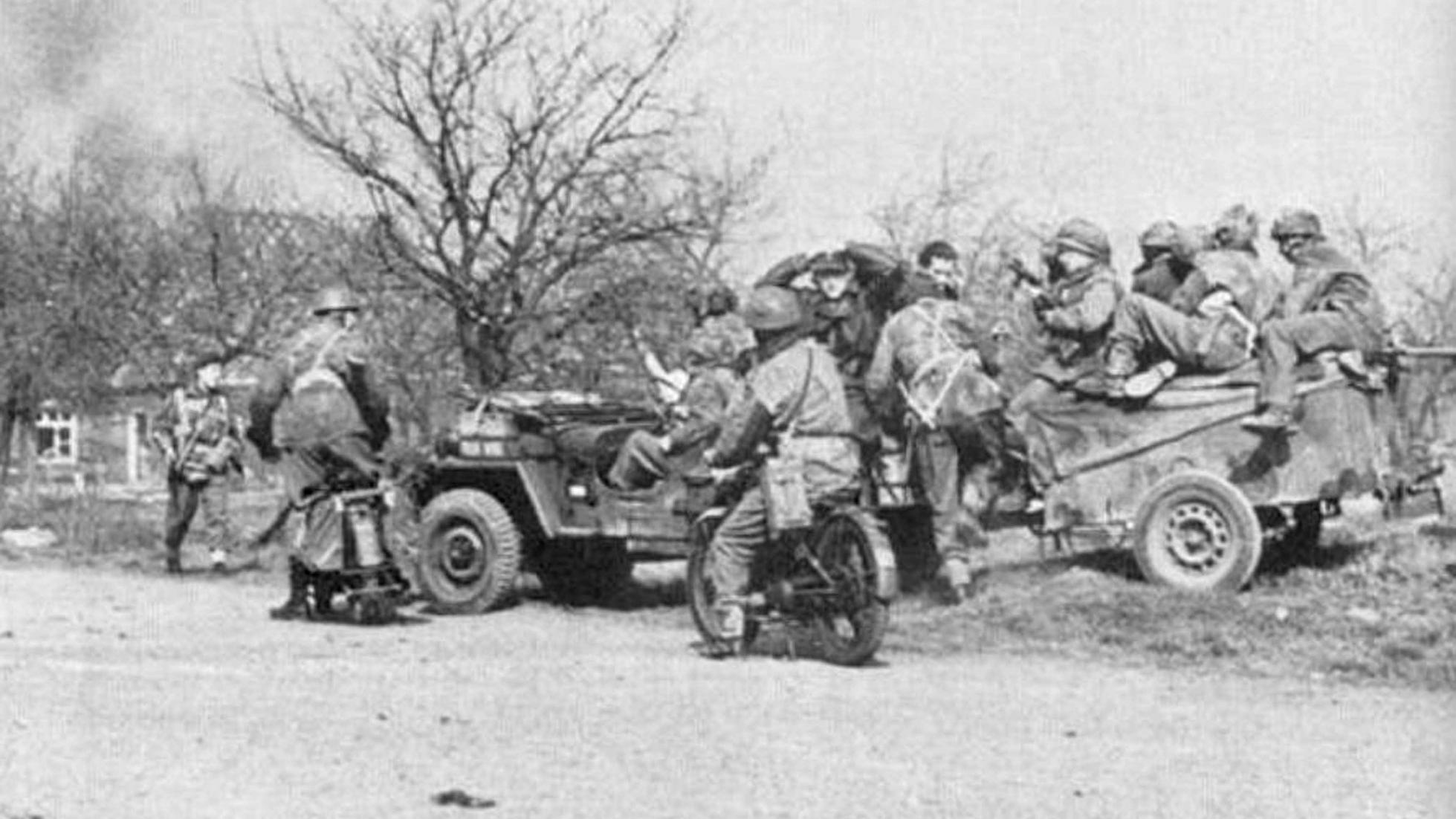 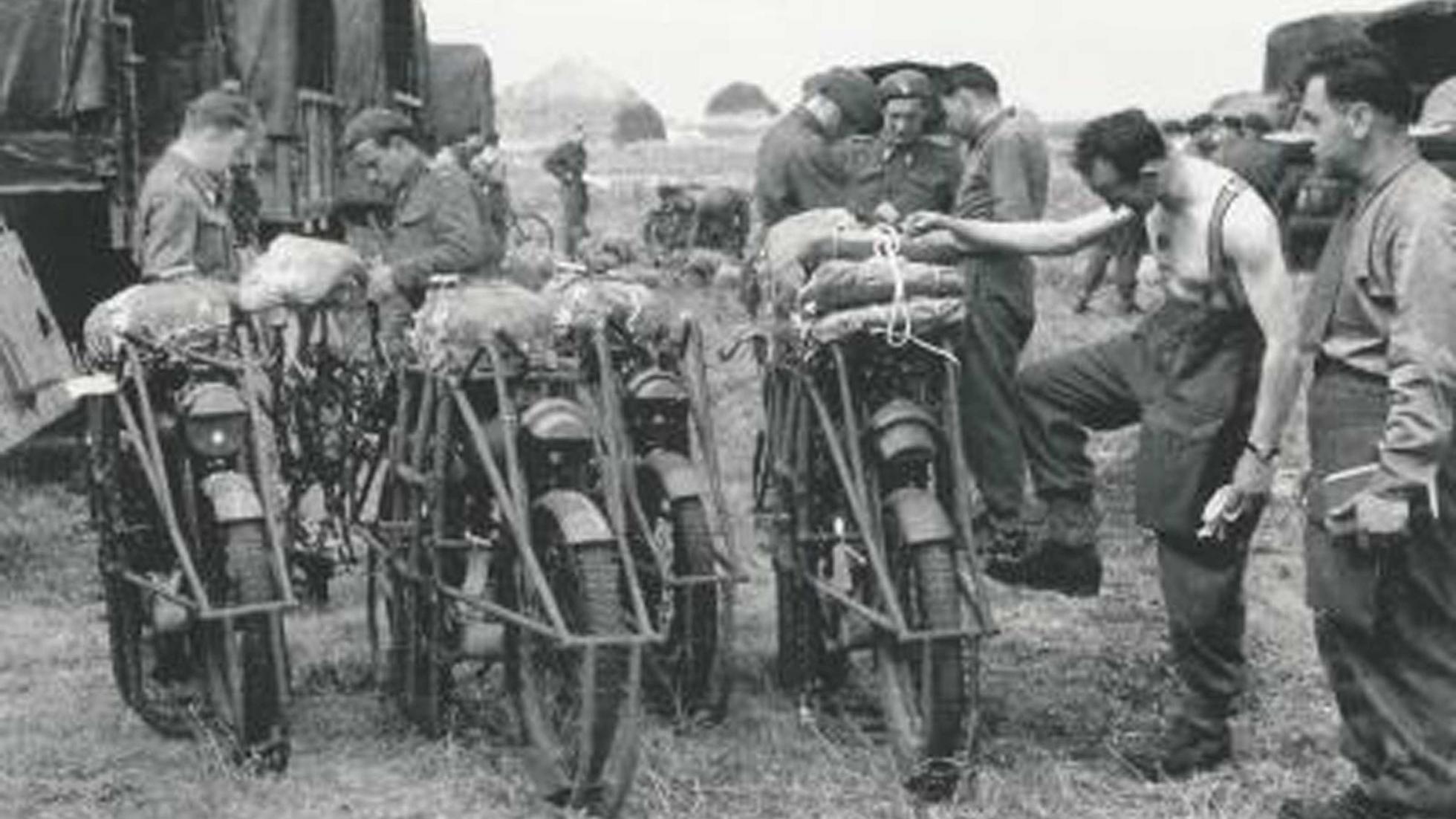 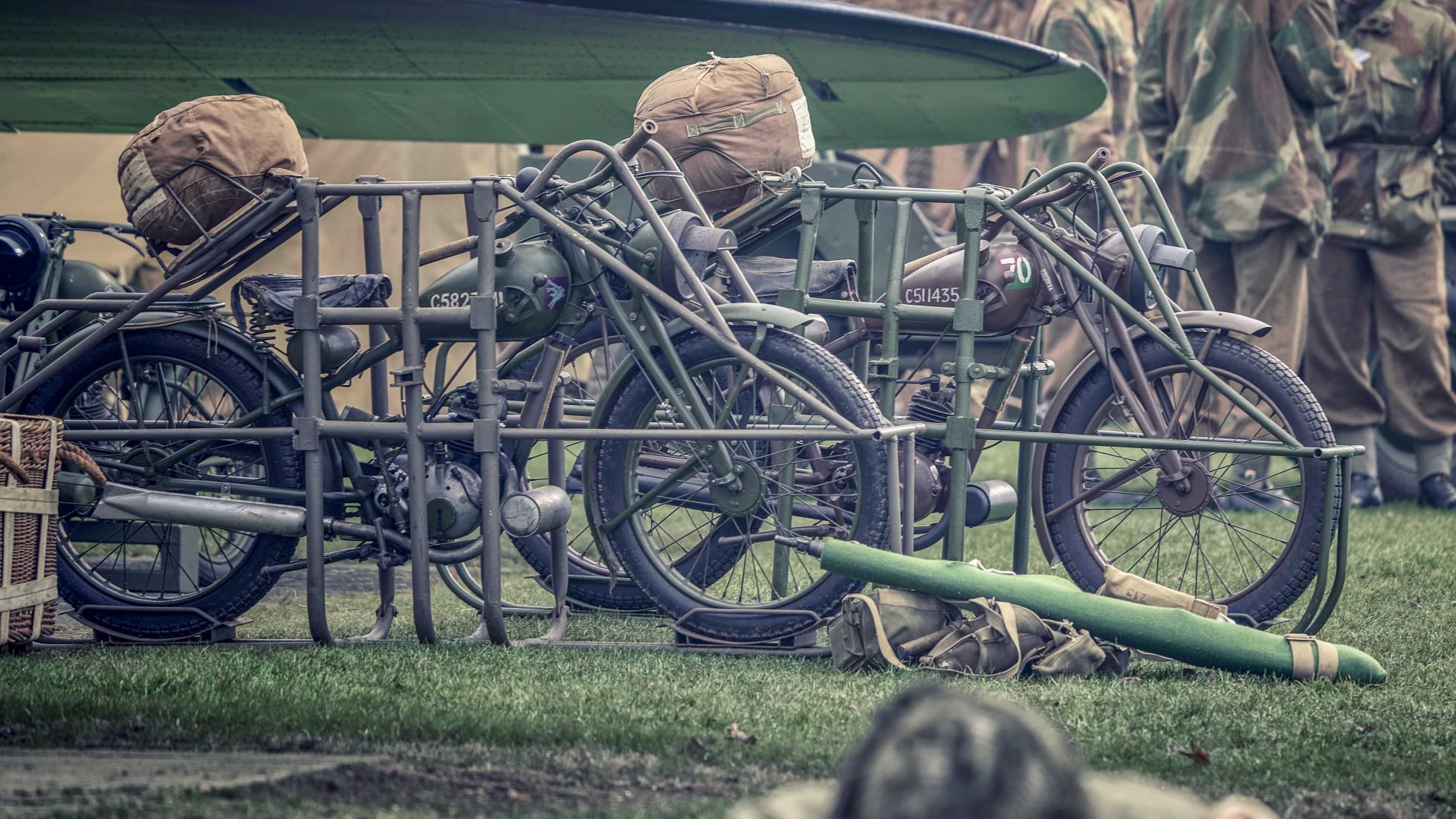