On the road in Bugatti’s EB110 Le Mans car

This stunning device is the actual Bugatti EB110 that raced at Le Mans in 1994. So far it’s the only Bugatti to have taken part in the 24hr race since a supercharged T57C took Bugatti’s second victory back in 1939. Despite needing five new turbos during the race, the EB110 ran as high as sixth overall before a tyre failure less than an hour before the end caused Jean-Christophe Bouillon to spear into the barriers before the first chicane on the Mulsanne straight. Therefore history records that no Bugatti has finished Le Mans in the post-war period.

But the story of this EB110 didn’t finish 25 years ago. Nor does it stop once beyond the racetrack gates. Because the car, commissioned by French publishing magnate Michel Hommell, was designed from the outset to be road legal. Hommell’s dream was for the car to be driven to the circuit on public roads, and driven away afterwards. It would prove to be a one-way journey, but this EB110 was alleged to have been driven over a thousand kilometres from Bugatti’s state of the art factory at Campogalliano north of Modena, to Circuit de la Sarthe.

I’m not doing that many miles today, but I am driving the one and only EB110 LM in the hills outside of Barcelona. Here’s what it’s like.

Inside the engine bay

Think the Veyron was the first hypercar to mate a quad turbo engine to four wheel drive? Wrong. The EB110 pioneered the layout in the early Nineties, using a 3.5-litre V12 with one turbo per three cylinders. This particular engine is known internally by engine code B.110.11, no. 104, and each turbo was equipped with a 25.9mm inlet restrictor. During the race, this is thought to have been the cause of the uneven wear on the internal blades that necessitated the turbo replacements.

Astonishing. There’s a fair amount of lag at the bottom end where the engine just chunters and hiccups – it likes some throttle angle before it clears its throat. But just let the revs climb. Soon after 2,000rpm the turbos start to fizz and hiss, distantly at first, but then more fiercely. But that’s largely all it is – the revs are rising, the noise is intensifying, but the car ain’t going much faster. At 3,000rpm all that changes. The turbos are now boosting at more than atmospheric pressure and from 3-5,000rpm the EB110 really gets its shoulder into it. Now it feels fast, modern Porsche 911 quick.

For those used to modern turbo engines, you’ll know this level of thrust is then continued to the cut out, probably somewhere around the 6,500rpm mark. 25 years ago things were different. The EB110 LM’s rev counter doesn’t even enter the orange zone until 8,000rpm, with the cutout another 500rpm higher up. But it’s how the turbos behave over this second half of the rev range that’s so exhilarating. Because the noises get wilder, the thrust more vivid, the progress more eye-widening. Now it’s modern supercar quick: 600bhp only pushing 1,200kg, so a power to weight ratio near enough the same as a McLaren 720S.

The faster the pistons pump, the more air the turbos seem able to cram into them, the noise ultimately split evenly between shrill whistle and baritone cylinders. This isn’t a deep-chested, torque heavy motor, but a frantic, fizzing V12 that hisses and squawks, thrashes and soars. It sounds and feels amazing.

It’s the six speed manual transmission from the standard SS road car. The clutch is heavy, most notably at the top of its travel where it feels like you’ve got to push it past a hinge point before it becomes more progressive. It’s a long travel pedal, and the throw of the lever isn’t race car short either. But it’s oh-so satisfying.

There’s the warm tactility of that wooden knob and a weighty pull across the gate, but it’s the way the lever slides into each gear so crisply, slotting home so securely that gives you so much confidence. I’m sure the Le Mans drivers would disagree, but this is not a shift to hurry, more one to savour. I got a massive kick out of trying to heel and toe, meshing the gears as neatly as possible, simply because the act of changing gear was so involving.

This is my ‘I can’t believe it’ face. Just holding that Alcantara steering wheel in my hands was a massive privilege. Cars from this era deliver so much tactility and reward. Take the steering itself. There’s nothing remote or detached about it. You turn in and feel the effort build, get a sense of how hard the wheels are working.

Of course it corners flat. The suspension was shared with the road car, but tuned for racing. It’s very hard. Not solid, and as is so often the case with racing cars, packs remarkable damping into practically no travel, but it’s not going to compress its springs readily. Clearly I’m not going to be driving it at speeds that’ll test the grip levels of the Michelin race rubber, but the ease with which it turns into corners – progressively, without the over-brightened super-quick racks of most modern supercars – speaks of its athleticism.

It’s not massively eager though. Let’s blame the inertia in the 4WD system for just taking the edge of its turn-in bite. But once into a corner it’s stable, composed and, provided you manage to keep the turbos on the boil, you’ll get yourself a gale force exit out the far side.

These were the roads we were driving it on

Mostly forested, but smoothly surfaced and a great mix of sweepers and tight curves spread across hillsides. Somewhere to stretch the car’s legs…

… but not your own

Like almost every racing car, the EB110 LM is not big inside. Over six feet tall? You’re going to struggle. Slightly broad across the hip? Struggling might not be enough. The race bucket is brilliant. The flatter second seat obviously wasn’t in while it was racing, but is an original EB110 GT road car chair. Headroom is even more limited in that seat.

It has a lovely patina

Which is another way of saying it’s not in utterly perfect condition. But nor should it be. This is a 25 year old racing car, and that’s exactly what it feels like. The owner has a spare windscreen for it – what he actually believes might be the only unfitted original EB110 screen left anywhere – but has decided not to fit it just yet. Hence the whacking great crack.

Inside there’s a lovely hint of grubbiness, of a car that’s been used, not over-maintained or polished just for the sake of it. It feels like a time capsule rather than a museum piece.

Here’s an interior shot, just so you can have a nose around the cabin

Not much more to add. I’ll leave you to ogle its Nineties-ness. Feel free to put any questions in the comments and I’ll try to answer them.

And here’s the exterior

Complete with all the original sponsors. You can see how small the cabin is – how small the whole car is- when you learn I’m only 5’ 9”. But just look at it though. Short, squat and stubby. The car, not me.

This sums up my day in the EB110 LM. It jetting along a great road, chin scraping the tarmac, turbos hissing and wailing, the car dense and energetic. Just a massive privilege. 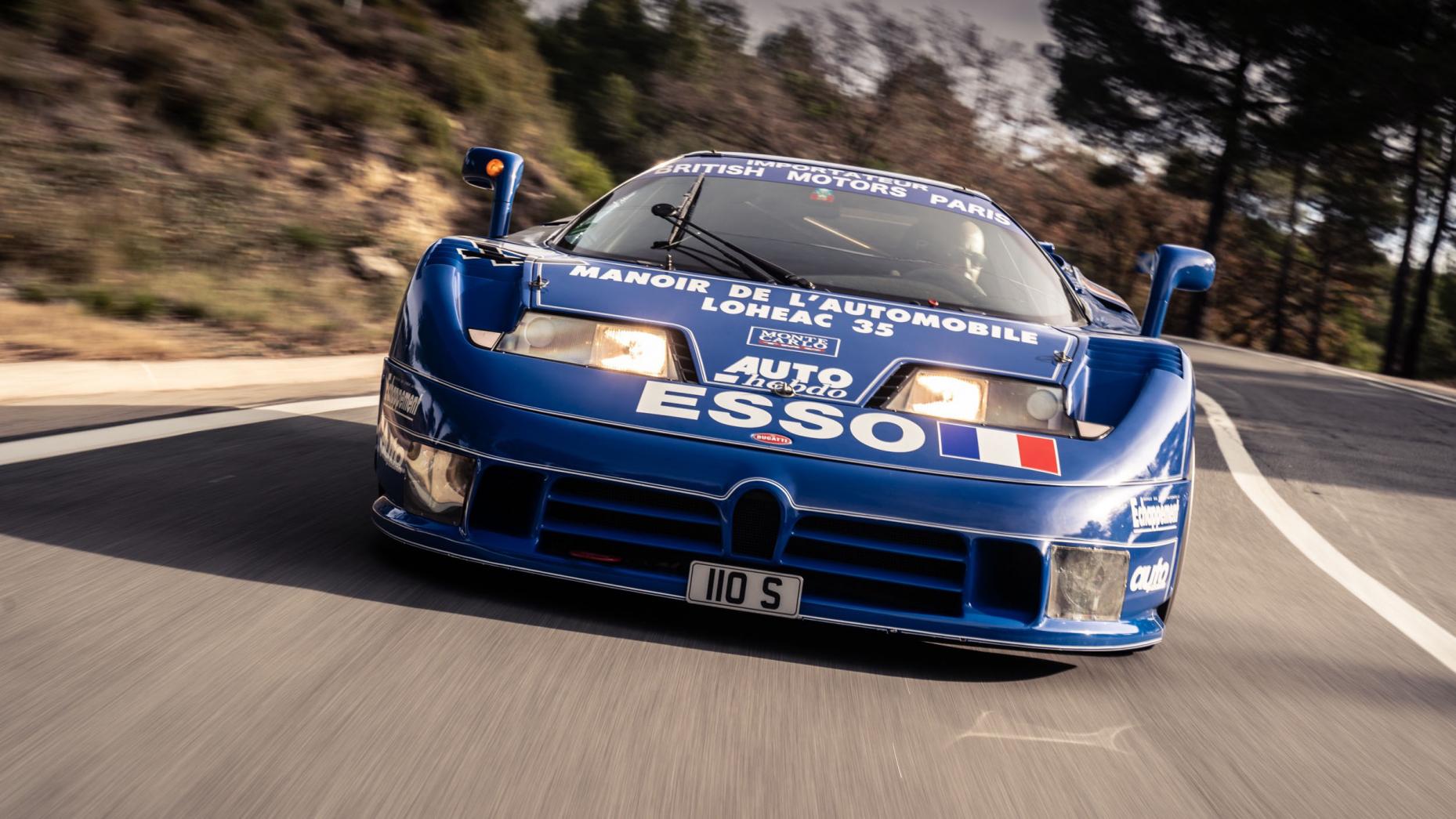 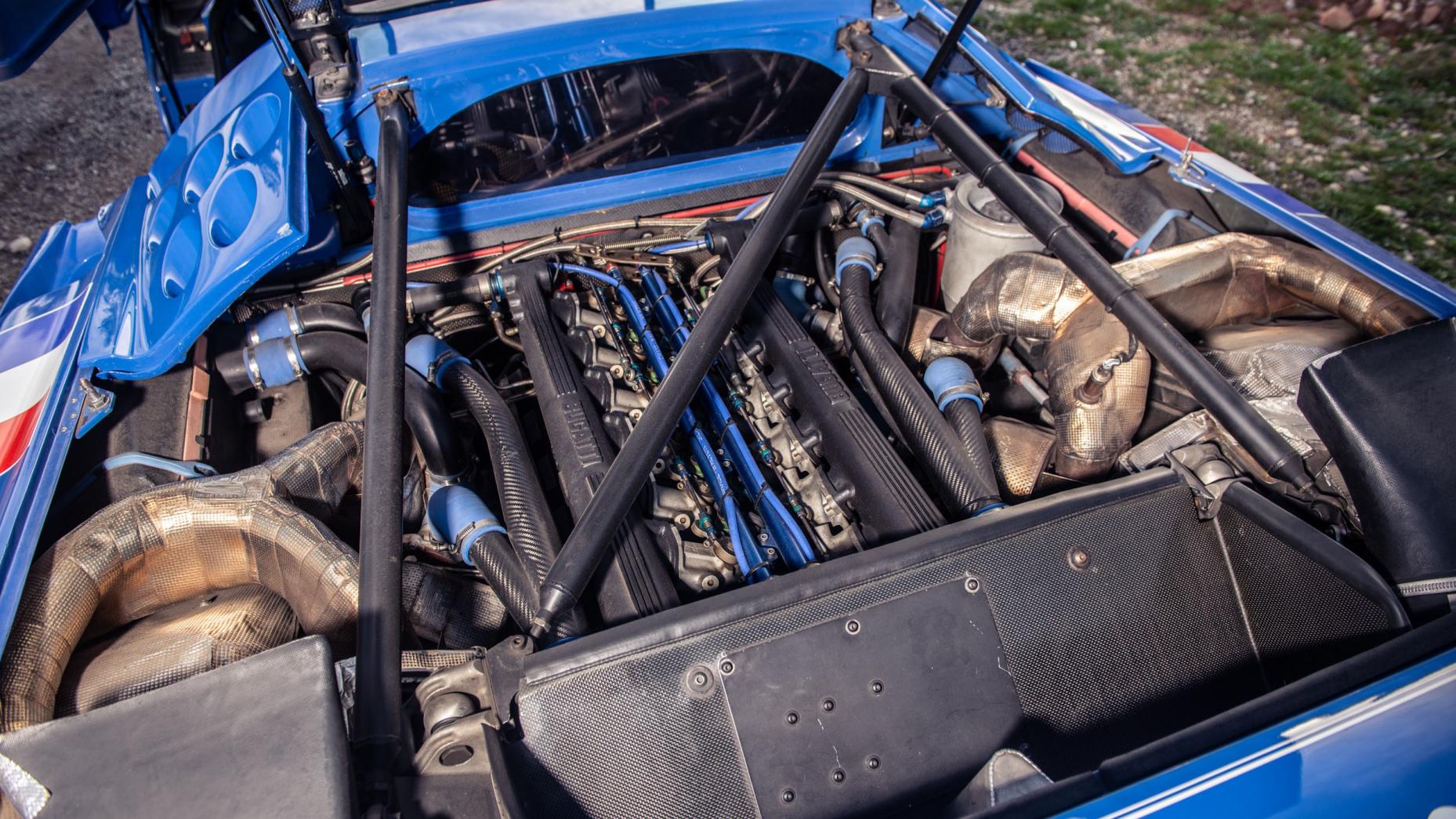 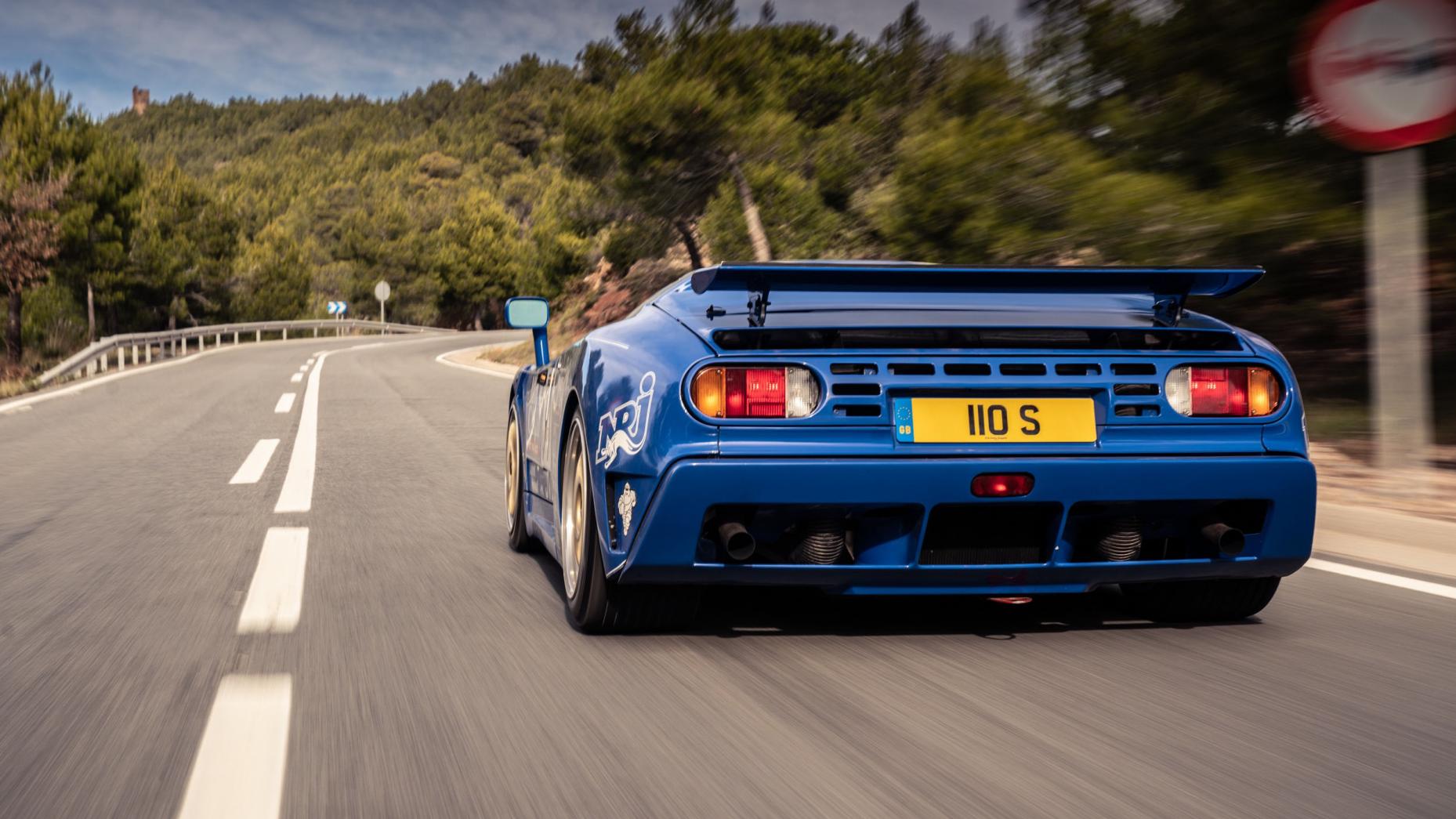 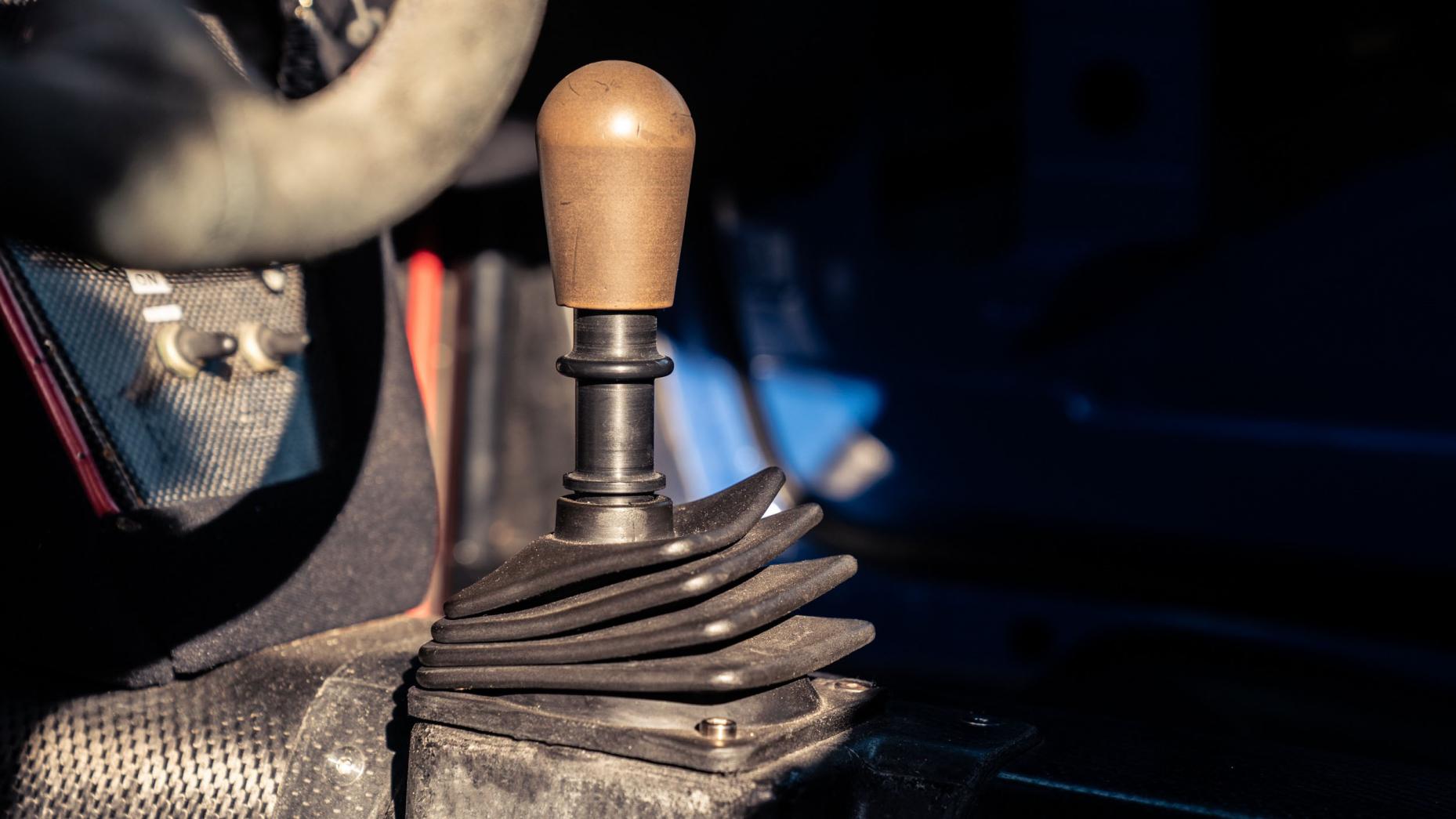 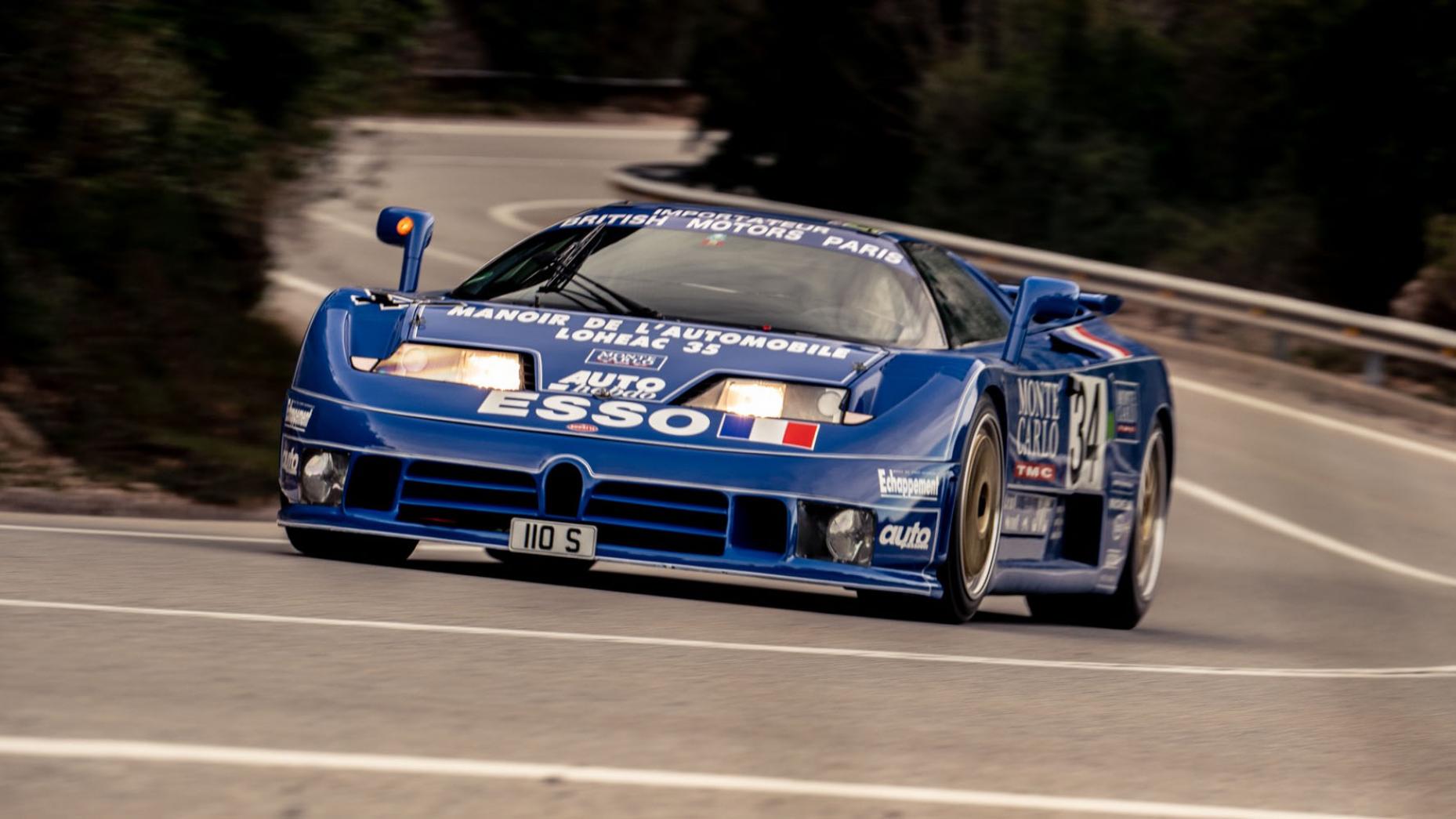 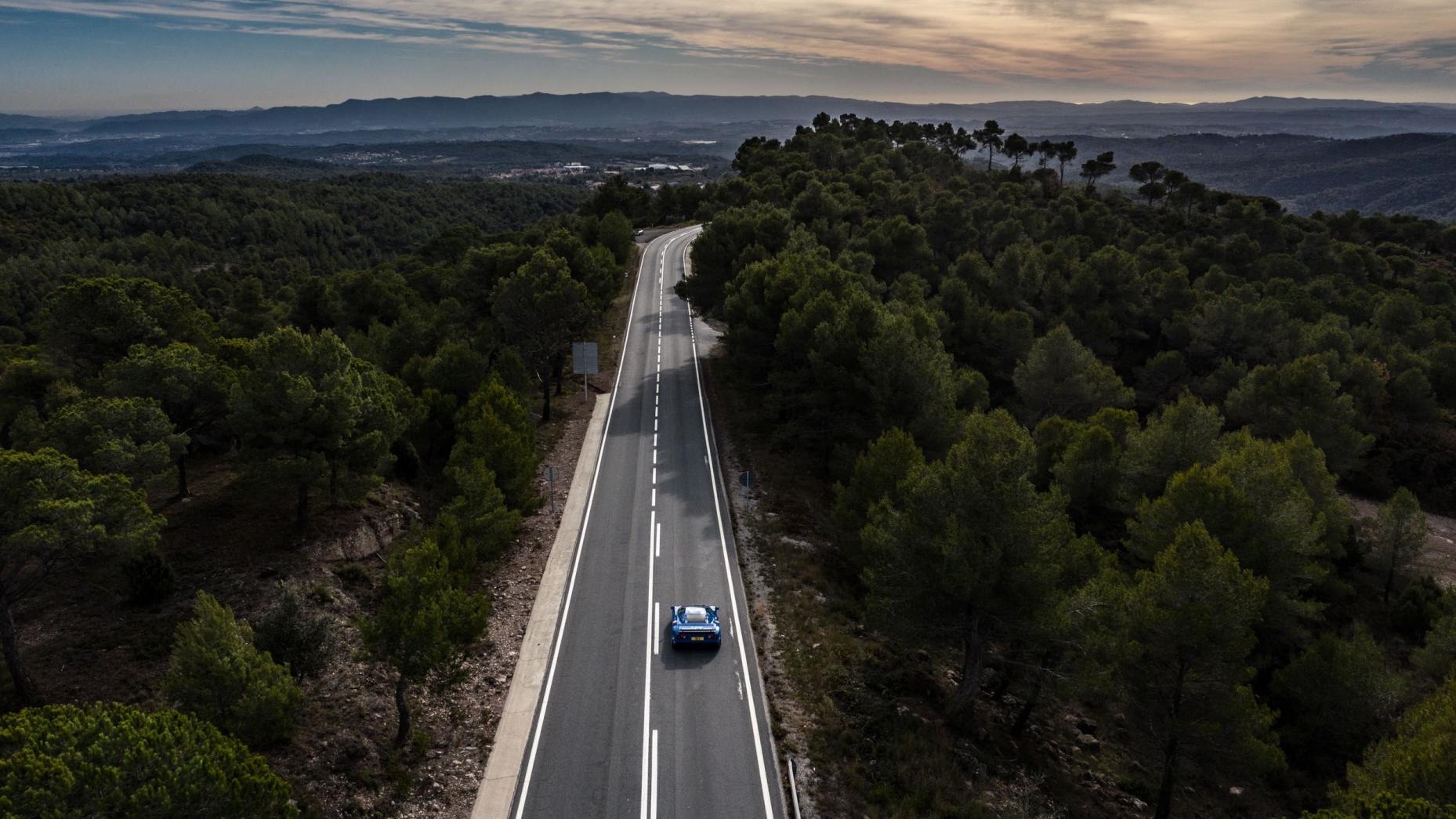 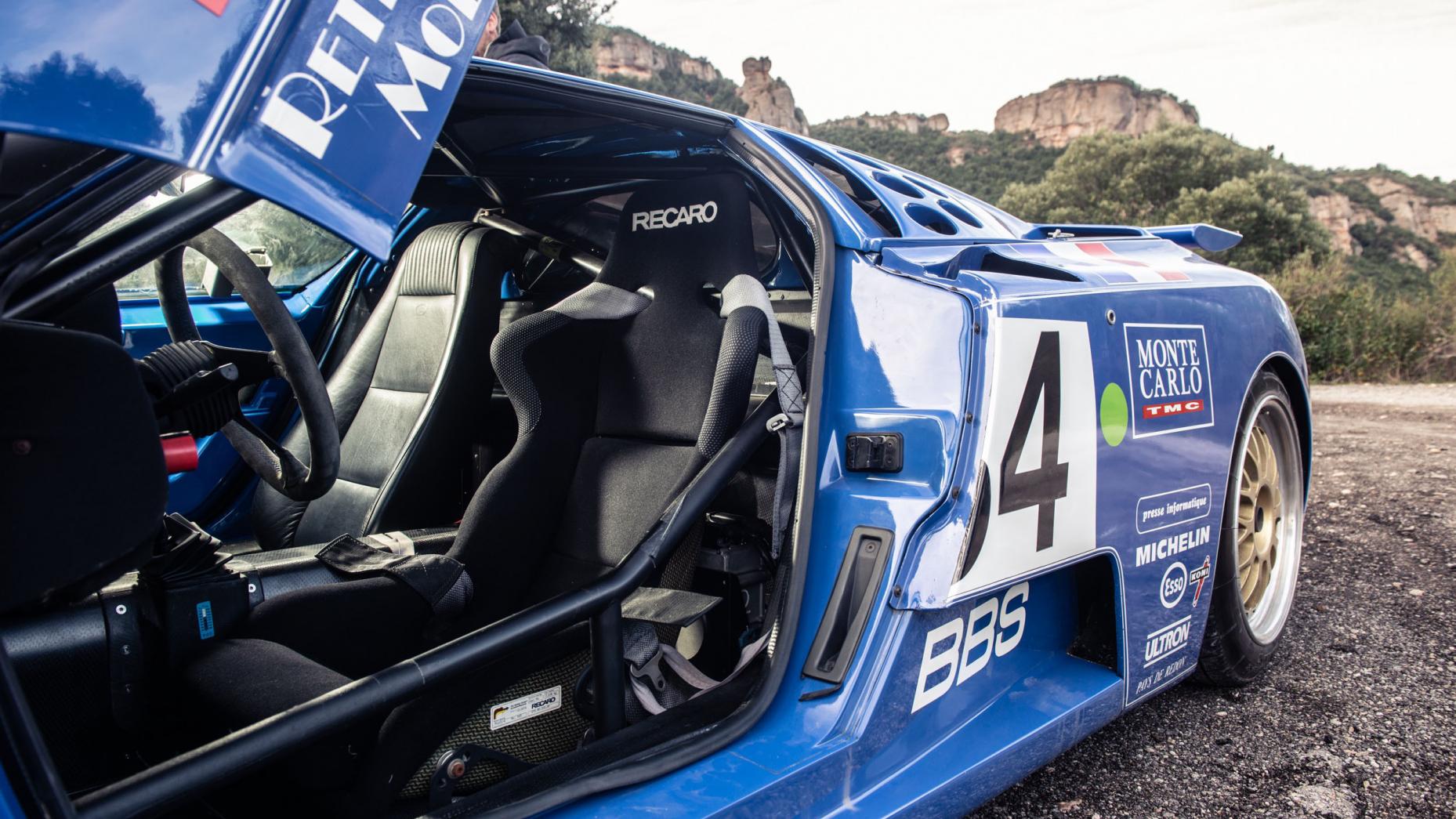 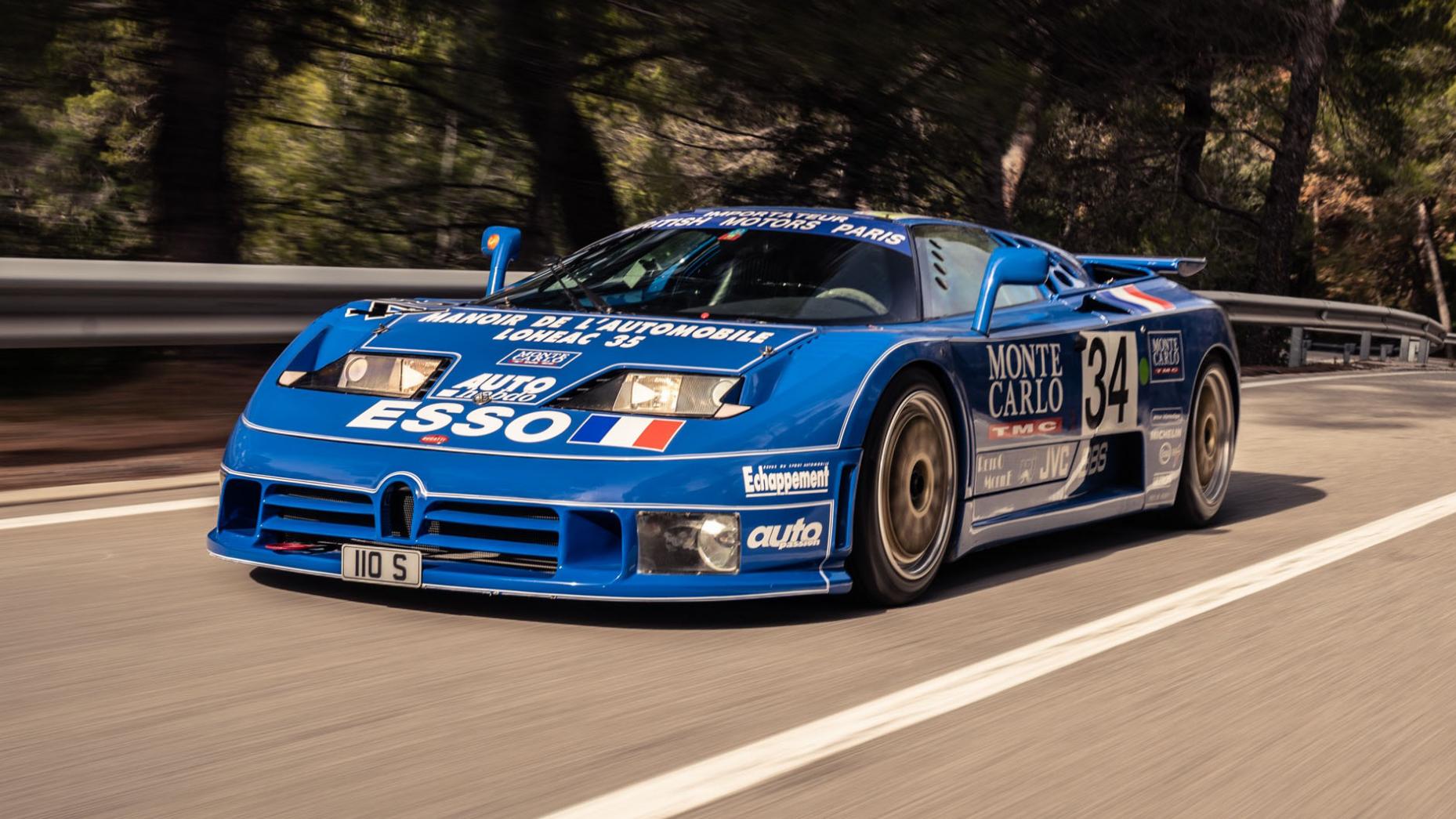